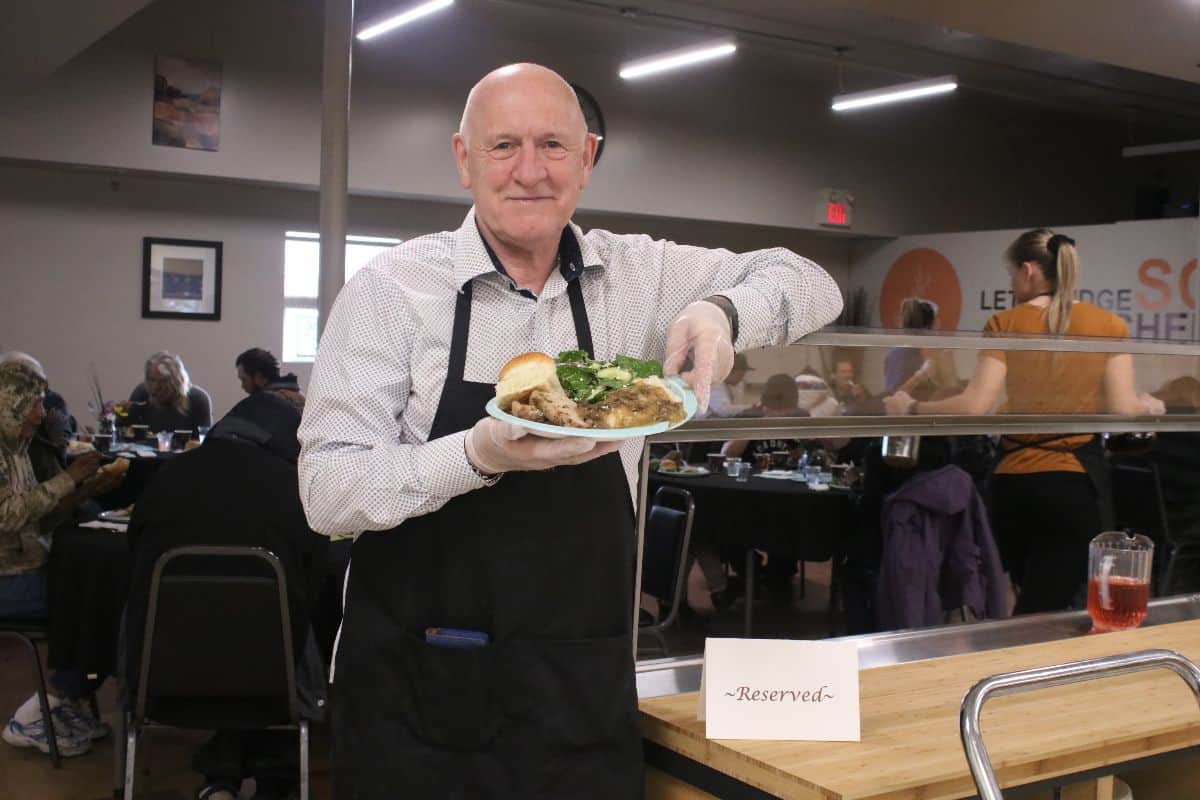 A gold lining in this dark cloud

How the Lethbridge Soup Kitchen has adapted to the Covid-19 crisis and has identified new ways to assist the community
Melissa Villeneuve
Support this work. Tell a friend.

It’s been a few weeks since many of us have had the chance to dress up and go for a nice sit-down meal at our favourite restaurant. Crystal Alberta Godsalve can’t remember when she last had that luxury. “It’s been a long time.”

Godsalve has been living at the Lethbridge Shelter for some time now and is a regular guest at the Lethbridge Soup Kitchen next door. On Sunday, she was treated to a special dinner service courtesy of the new Chef’s Table program, designed to give our most vulnerable citizens a taste of indulgence while helping local chefs and servers give back to our community.

For over 35 years the Lethbridge Soup Kitchen has provided sustenance for those in need. Everyone is welcome and every single person is considered their guest. Since 1984, they’ve offered a hot breakfast and/or lunch. In October, they ramped up to add a dinner meal as well, most days, in a former partnership with Streets Alive Mission.

The Soup Kitchen has continued to run the evening program on their own, and it was a first to serve a restaurant-style fancy dinner on a Sunday evening. Bill Ginther, the Soup Kitchen’s Executive Director, says since the Covid-19 crisis hit, they’ve had to adapt but also identify new ways to assist the community.

“During this pandemic, I’ve had to think what we can do to show the general public that we’re operating as usual,” said Ginther. “We see places closing everywhere, including places where the homeless generally would be – malls, the library – so our homeless neighbours really have no place to go.”

It started with a phone call from a staff member at The Keg. They offered a cooler full of perishable products the restaurant couldn’t use after they were ordered to close due to the pandemic.

He shared a message on Facebook and quickly received several responses. When the chefs came to view the facility, Ginther said they were impressed by the high-end kitchen equipment. Ginther told them they could have full access to any ingredients to create their meals.

But Chef’s Table isn’t just about cooking a fancy dinner. The Soup Kitchen’s dining area is transformed into a restaurant setting with dimmed lighting and music, and the tables adorned with tablecloths and flowers. Guests are seated as they come in and served the three-course meal by a waitress, rather than standing in a lineup.

“I think that in life, all of us like a special treat and to be served,” said volunteer Michelle Alexander. “Right now, life is so crazy and different than what we know, it has to be even harder for the clientele that come here.”

Amanda Knelsen is the General Manager for The Keg. Recently laid off, she learned of the Chef’s Table program through Facebook and had some extra time to give. “I do know that the need is real… I think it is really important to give back,” she said. “Even though I’ve only been off work for a week, to get back into the kitchen was exciting. It warms my soul to be able to do something at this time.”

“I was excited to see the workers and you get to be all fancy and stuff,” said Godsalve, who dressed up in a sparkly shirt for the occasion. “It’s nice because they let people who don’t live at the Shelter come here and eat. So, if you want your friends over for dinner, they can come.”

While restaurant establishments have been ordered closed for dine-in service by the provincial government, as a “food-related charity” the Lethbridge Soup Kitchen is classified as an essential service and therefore exempt. However, they must practice mitigation strategies such as distancing between volunteers and guests (with designated markings on the floor), using personal protective equipment such as gloves, encouraging frequent handwashing, and using single-use cutlery and dishes

They can normally seat up to 120 people, but they’ve now limited the facility to 50, including volunteers, at one time. Ginther acknowledged it would be extremely difficult to limit to 15, should the government change the exemptions. They typically serve 80-120 people per meal.

For now, Ginther is being cautious while trying to provide some normalcy to the lives of their guests. He knows if coronavirus hit the homeless population it “would spread like wildfire.”

Speaking with several of the guests at the Soup Kitchen, they feel they are being informed about the risks. Godsalve said there are “posters up everywhere”, Shelter staff that answer questions, and people ready to give rides to medical appointments when needed.

“The DOT (Diversion Outreach Team) really helps us out here too,” she said. “It’s pretty difficult because there are lots of people that don’t drive, and we can’t go through a drive-thru to get something to eat. With covid virus, most of us are really grateful that we have the shelter and Streets Alive and here to be able to eat every day.”

But with their usual haunts closed, including the library, and many without a cellphone, the homeless don’t have as much access to the internet for information or to stay in touch with family members. As it was before the pandemic, Godsalve said they tend to depend on one another. “It’s a really good family community here. We all look out for each other. A lot of people that live at the Shelter now have been here for years.”

Community collaboration – and a “gold lining”
“It’s been amazing to see people step up,” said Ginther. And they’ve stepped up in so many ways. Around 35 new, younger volunteers have stepped up to take the place of senior volunteers. Food donations have been pouring in from many local restaurants and producers, as well as financial donations from individuals and organizations, and even a storage shed. One local company has offered to cover all expenses for the single-use items.

“Our donations are the highest they’ve ever been for the month of March in our 35-year history,” said Ginther. “Our community has always been amazing when it comes to stepping up when there’s a need. And we see that in spades.”

Four items that are always in demand:

In the spirit of paying it forward, extra items are frequently shared with other local agencies in need.

“I refer to this pandemic as a dark cloud, but… we have seen a gold lining in this dark cloud.”