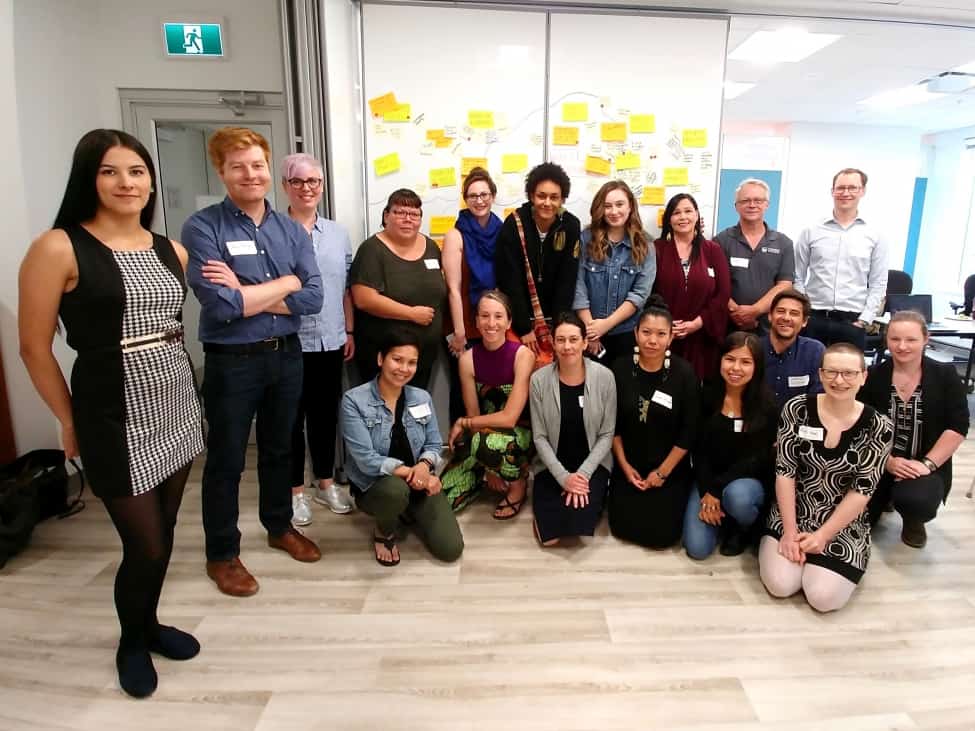 Some participants got together for a group photo during the lunch break. Courtesy of Alexander Dirksen

I have good news: Journalists from different media organizations in Vancouver are ready and willing to collaborate on a big project focused on the child-welfare system. We even have a pretty good idea about what that project might look like, thanks to about 40 people who came together in the city last Thursday to brainstorm ideas.

On June 28, The Discourse asked youth from care, parents who’ve had their children removed, family lawyers, Indigenous elders, social work professors and other stakeholders to tell us what kind of journalism projects they’d like to see. We began by building out a map of problems and patterns in the child-welfare system:

Then we asked people to put stickers on the map in areas where they’d like to see deeper reporting. Clear clusters emerged…

Then people worked in small groups, using this worksheet as a guide, to develop specific project ideas. A journalist was on hand at every table to support this work, and there was also at least one youth from care in each group.

In the afternoon, groups presented their project ideas to journalists from The Discourse, The Globe and Mail, CBC, the Vancouver Courier, StarMetro, The Tyee, Megaphone Magazine and Black Press. After evaluating each idea, the journalists spent the rest of the afternoon developing one project — informed and inspired by the groups’ ideas — that they could realize together.

I was so impressed with how respectfully (and quickly) everyone worked together. And while we’re still waiting for some participants to fill out feedback forms, it seems everyone generally left feeling encouraged:

“It was a safe place to do good work. Also, it was culturally sensitive, providing an Elder for opening prayer and song.” — Lynn Marois, communications liaison officer for B.C.’s Representative for Children and Youth (RCY)

“I appreciated the opportunity to gather with individuals from different fields and share ideas.” — Corinne Feenie, lawyer who acts for B.C.’s Ministry of Children and Family Development (MCFD)

“I would like to be involved as much as possible — planning committee, writing stories, etc.” — Tracy Sherlock, reporter and journalism instructor

“This is an amazing idea that is dear to my heart because I feel it will help so many parents out there, Indigenous or not, realize they are not alone.” — Leona, Gitxsan mother with lived experience in the child-welfare system

In the coming weeks, we journalists will turn our idea into a proper proposal for a collaborative one-year project. We’ll invite everyone who participated on the 28th — and you — to critique this proposal before we send it to the Vancouver Foundation for funding consideration.

Collaborating in an industry that’s used to competing isn’t easy: We need you to get behind us if you value the work we’re doing to build capacity for deeper child-welfare reporting, so join The Discourse — and invite your friends, too.

Inside a child-protection trial

We’ve been following “Justine’”s trial since it began in March 2018, and we’re withholding her real name to protect her children’s identities. On June 21, as the latest chapter of this  trial came to a close, Judge Lyndsay Smith called a timeout; after hearing from more than half of MCFD’s witnesses, Smith was still struggling to understand why the ministry wants to permanently remove Justine’s four daughters from her care. Here’s the story I wrote about this intense moment at the Vancouver courthouse, and here’s the longer transcript.

People have been sending me feedback about my coverage of Justine’s case. Some of you think my reporting has been one-sided; others are saying they relate to Justine’s story. We’ll be publishing some of your letters over the coming weeks. Please keep writing, and post your thoughts in The Discourse’s public discussion space.

Less from me & more from the fellows

Two of my dearest friends are getting married in France, so I’ll be spending some time in Douarnenez over the coming weeks. In my absence, Shae-Lynn and Cammy, our youth in/from care media fellows, will be taking over these newsletters. Stay tuned for that goodness.

And if you have any travel tips for (lucky) me, I’m all ears. This’ll be my first trip to France.