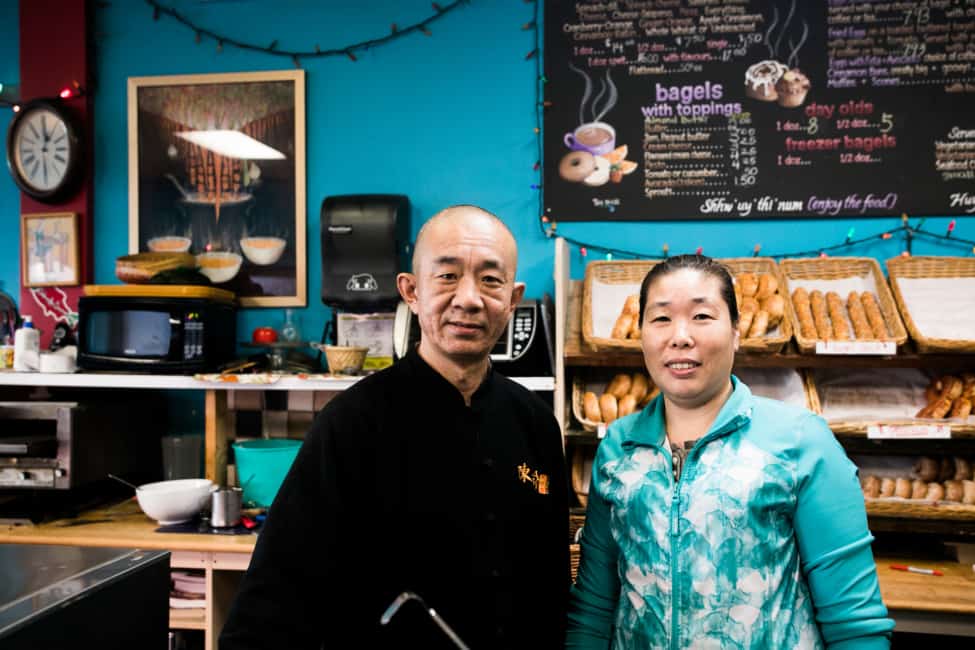 Newcomer stories: “I want to give back”

On November 28, Lou Zheng and his wife Gloria celebrated their fifth anniversary as owners of The Island Bagel Company in downtown Duncan. They, along with their 15-year-old daughter Nina, made the move to Canada in 2014 from Tianjin, China (population 15.6 million) without knowing a word of English. They found their new home in Maple Bay.

In order to better understand where our community is headed, The Discourse Cowichan is looking into who is moving here and why. Each week, as part of our New in Town series we are going to introduce you to a recent arrival to our ever-changing valley. Today, we’ll get to know Lou, a 20th-generation Chen Tajiquan master, who teaches free tai chi classes as his way of saying thanks to his new community.

When I interviewed Lou last week, he answered most of the questions in Mandarin. Thanks to Tina Chung of the Cowichan Intercultural Society, who arranged the interview and translated Lou’s responses.

Why did you decide to move to Canada?

“Five years ago, my son [Winston, now age 27] after graduation came to Canada to study [hotel management at Niagara University]. He called me and said, ‘Hey, I really like Canada, people are so friendly and helpful.’ Then a person told me that I could buy a business and immigrate to Canada. At that point, the person, the mediator, told me that I could spend $200,000 to buy a business and then hire a person locally and that would start the process. So I decided to look for a business.”

How did you end up in the Cowichan Valley?

“I went to Toronto first and then I went to Vancouver and Victoria and Nanaimo. Then I found the bagel place. I compared Vancouver and Duncan. Vancouver was too busy. But Duncan and the Cowichan Valley had friendly vibes and I felt very welcome. And I like the quiet environment.”

“The second reason is that it was a good environment to learn English, because if I had gone to Vancouver there are so many people there who speak Mandarin. Here are better opportunities for us and our daughter to learn faster.”

Did you eat bagels in China?

“I love bagels. Bagels are from Xinjiang province. [China’s version is called girde naan.] They are put in the fire there. Here it is put in the oven.”

How has it been adjusting to life in Cowichan?

“I am settling in now, but before it was challenging because of the language. When I came to Canada, first day, I met people and they would say ‘How are you?’ but I didn’t understand. I didn’t know any English. All I knew was how to count from one to five.”

“Now I’m really happy. I’m thinking of buying another business here. I really like the business system here compared to China. Here is like more organized; there it is like you have to work so hard.”

“A lot of people have helped me over the past five years. That is why I volunteer to teach tai chi. That is how I want to give back. I teach Monday to Friday, 9 to 10 a.m. in the parking lot behind the bagel store. For five years, I’ve never stopped. If it’s raining or snowing, people know not to come. I teach for free because I like to contribute to the community … I will teach at any school that wants to learn tai chi.”

“She likes it a lot. She really enjoys school. When my daughter came, she was in Grade 5, but her English was at a Grade 1 level. But after studying hard she is now comfortable in English. She’s getting all As.”

Do you have any relatives in China who want to join you in Canada?

“I want to bring my parents, but it’s very difficult. I have a working visa, so I can’t sponsor them. I came to Canada through the Entrepreneur Program. Before we came, we were told it would be easy to become a permanent resident. That’s the challenge we have now. I have followed all the regulations before I came here. Some people before me maybe came here through this program and say ‘OK I just get the money to buy a business, and get the visa and not do any business.’ For me, it’s different. I’ve done all the promises. I’ve hired local people and make sure the business go nicely so people can still have jobs.”

“When I arrived here, for the first three years, I worked really hard, Monday through Sunday, seven days a week. I didn’t go back to see my parents. Then I went back because my mom was sick; she had a surgery that got infected. They all want to come, my family. But under working visa, it’s very difficult. I am the oldest child. I will definitely bring my family.”