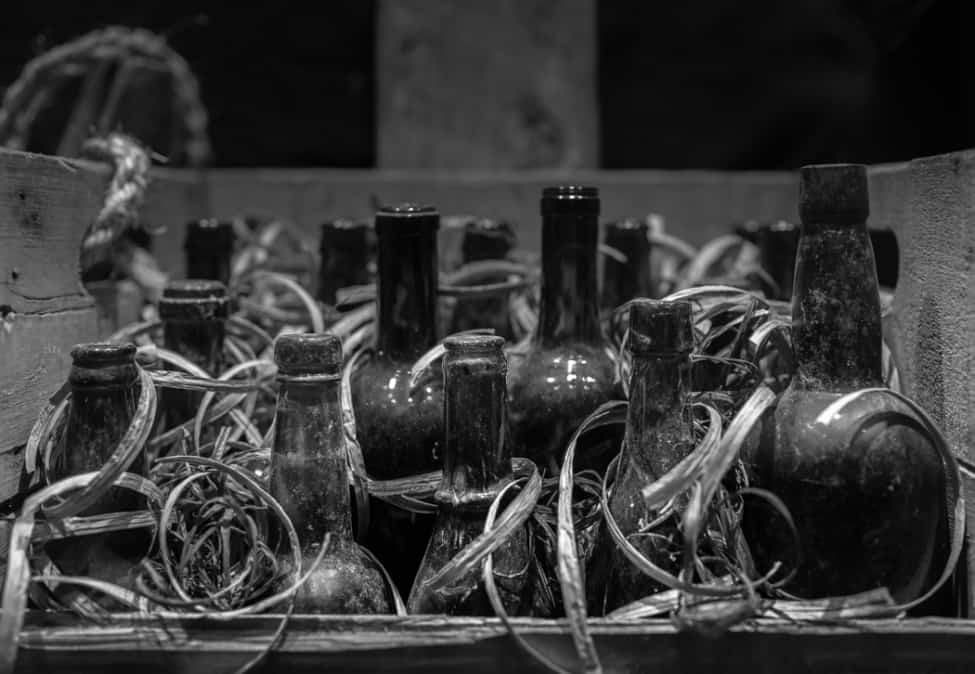 Bootleg contraband inside the Scollard Tunnel, part of the "1919-1929, The Roaring Decade" exhibit at the Mill Bay Heritage Museum. Photo credit: Valerie Payne

What were the rum-running days like in Mill Bay?

The sensational tale of one of Cowichan’s biggest alleged bootleggers.

One hundred years ago next month, Prohibition became the law of the land in the United States, banning the production, transport and sale of alcohol. For nefarious types in the Cowichan region, it was a huge opportunity. Rum-running by boat to the U.S. became big business. It was so much a part of life here that it was memorialized in song:

So it’s up with the anchor and let us away,

With our load of good whiskey from Cowichan Bay,

And it’s out to the Gulf and south to the Sound,

And watch for the Revenue Boats coming round.

What were those rum-running days like in Cowichan? Valerie Russell of Maple Bay recently sent us that question.

I visited the Mill Bay Heritage Museum to find out. The exhibit, “1919-1929, The Roaring Decade,” features a section on the area’s bootlegging past. Maureen Alexander, president of the Mill Bay/Malahat Historical Society and my guide through the exhibit, tells fascinating tales of the rum-running days in southern Cowichan.

British Columbia bootleggers got a head start on the business, because B.C. banned alcohol three years before the U.S. did.

A bootlegging business needs farmland, and the Cowichan Valley had plenty, Alexander tells me. “They would truck it down the Malahat to the speakeasies, when there was Prohibition here, in special trucks with tanks that they would fill.”

When B.C. voters overwhelmingly rejected Prohibition in 1920, the focus shifted to moving booze offshore. Alexander says that rum-runners loaded Canadian-made alcohol onto local fishing boats that would head out to meet up with larger ships.

“The southern tip of Vancouver Island was ideally positioned since it sticks out like a boot kicking into the exposed butt of Washington state,” writes Rick James in Don’t Never Tell Nobody Nothin’ No How: The Real Story of West Coast Rum Running. “With a maze of islands scattered throughout the deep, sheltered waterways of the Strait of George and Haro Strait, and the ports of Vancouver and Victoria only a short distance away from the American San Juan Islands, the area soon proved a veritable floating liquor marketplace where Canadian boats delivered up orders to their American counterparts in relative safety.”

A lot of the trading took place on remote islands, James writes. But the ballsiest rum runners would transport the booze directly to American shores, “jumpin’ the line” across Haro Strait.

The Mill Bay Heritage Museum exhibit includes a 500-pound steel door that was recovered a few years from the former home of G.F. Scollard on Handy Road by the Mill Bay Marina. Alexander explains that this was the door to a bank vault in his basement where Scollard was rumoured to have stored vast supplies of alcohol as part of a major bootlegging operation.The story goes that a tunnel went from Scollard’s house to nearby Wheelbarrow Creek, where his men would use wheelbarrows to transport the booze down to the beach. A later excavation of Scollard’s yard did indeed reveal a tunnel, Alexander says.

She tells me that the rum-running rumours may have started with one of Scollard’s elderly neighbours:

“She wanted to welcome him to the neighbourhood, so she baked her little apple pie, and toddled over with it and she was met by these armed guards that frisked her and took the pie and told her she was not to set foot on the property. So then of course rumours started to fly. … He had spotlights all over the house that were on, showing the whole property. He tried to block off the beach actually; he put a wall on the beach to keep people from going down, but the tide washed it out.”

A 2010 CVRD staff report on a rezoning application in Mill Bay notes that Scollard’s house had bulletproof windows and was “at one time owned by the accountant of the famous mobster ‘Al Capone.’”

I wanted to learn more about G.F. Scollard, so over the weekend I dug around Ancestry.com, Newspapers.com and other sites. The newspaper articles I found reveal wild stories of a man in frequent trouble with women and the law. (I didn’t, however, find anything that proves that G.F. Scollard was a bootlegger or an associate of Capone’s.)

George Francis Scollard (1870-1956) got married, apparently for the fourth time, in Chicago in 1925 to the eccentric millionaire Sarah Smith-Scollard. At the time, according to a 1934 newspaper article, Scollard, “was poor but had a prepossessing personality.” His new wife had a net worth estimated at $15 million (in 1920s dollars) and reportedly liked to have much of her money on hand, usually in $1,000 bills. The Associated Press reported that Smith-Scollard carried $880,000 in her homemade dress and $2 million in her suitcases when the couple moved from Chicago to Bellingham, Washington in 1926.

During a trip to Argentina in late 1926, Smith-Scollard discovered her husband in bed with her traveling secretary, who turned out to be one of Scollard’s previous wives, Maude Harvey. According to news accounts, Scollard and his ex-wife then gave his current wife the slip on a train in Argentina.

The race was on to see who could reach their Bellingham home first and the large amounts of cash and other valuables inside it. Scollard and Harvey had a head start and I found passenger records of them arriving in New York from Buenos Aires on December 29, 1926. Smith-Scollard arrived in New York from Uruguay on January 4, 1927. Scollard made it to Bellingham first, and was subsequently accused by his wife of stealing $2 million, some of which he was found to have deposited in safety deposit boxes under several names at various banks in Vancouver.

He was arrested for grand larceny in Vancouver on January 19, 1927, the Victoria Daily Times reported. But soon thereafter the couple reconciled, according to news accounts, and Smith-Scollard dropped the charges when Scollard agreed to return $1 million to her. However, later that summer, his wife said that Scollard had disappeared again, allegedly making off with more than $1 million in cash and convertible bonds. In March 1929, the Vancouver Sun reported that Scollard was arrested in Victoria after $200,000 in jewelry, cash and bonds of Smith-Scollard’s were found in a bank safety deposit box. She later dropped the charges.

By this time, Scollard was living in Mill Bay. He had immigrated to Canada in 1928 with a stated intention to retire and $10,000 in hand. Scollard-Smith divorced her husband but kept his name until she died in Montreal in 1932. In her will, she left him $1.

Scollard lived in Mill Bay until 1950. According to Maureen Alexander, he donated the lot for the Malahat Masonic Temple, but never followed through on promises to donate land for a school, a park and a community hall. He died in Vancouver in 1956 at the age of 86.

The Mill Bay Heritage Museum is open Sundays from 12 to 4 p.m. Know of other great tales from Cowichan’s rum-running past? Drop me a line. I’d love to hear from you.