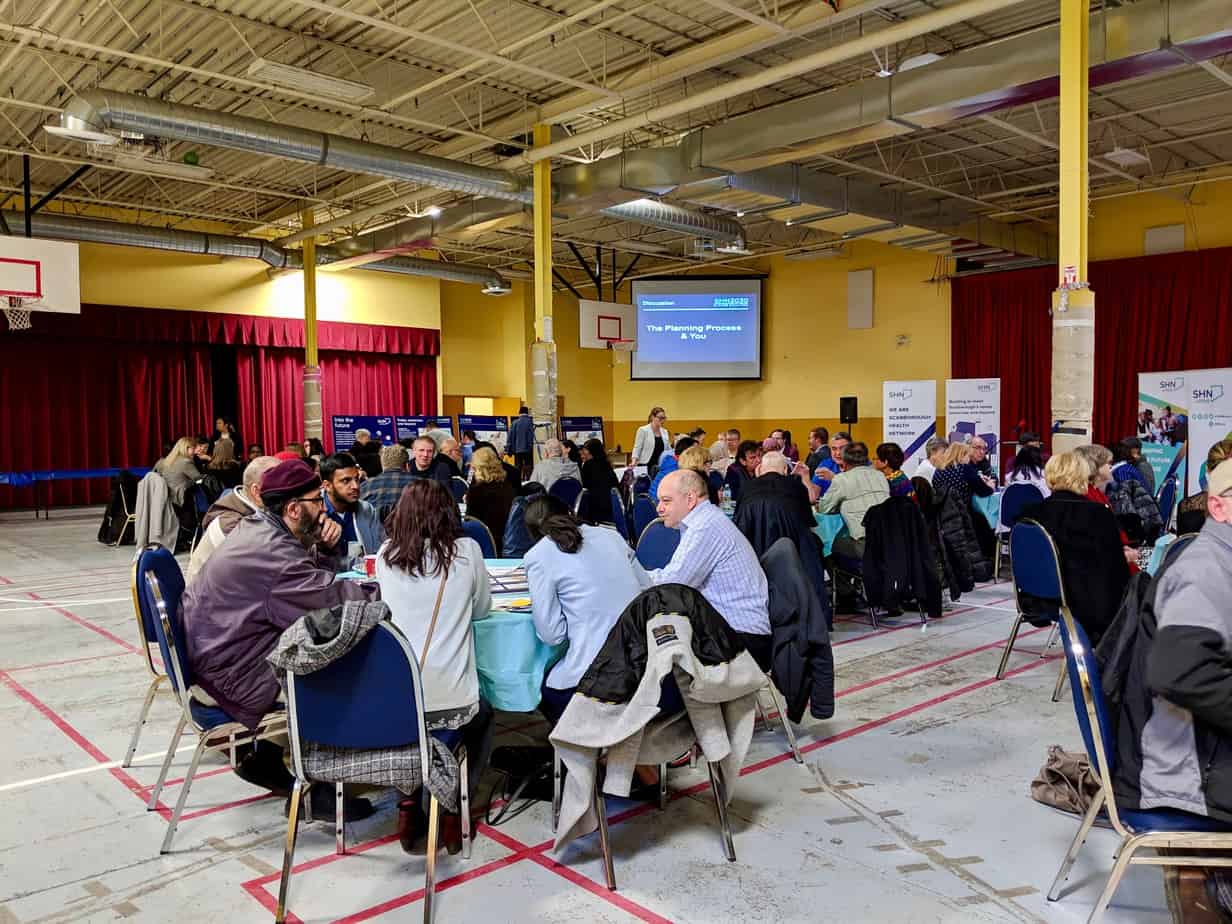 Attendees voted on three options for two Scarborough hospitals in the future. Many voted for the third option, which was to keep the Centenary site and find a new hospital site, with the caveat that the new location serve North Scarborough. Aparita Bhandari/The Discourse
Scarborough

How to get the word out in Scarborough

Given how large, sprawling and transit-inaccessible this suburb is, what's the best way to share information with all of its many residents?
Aparita Bhandari
Support this work. Tell a friend.

While researching for my next story, which looks at the daily challenges commuters face when using transit to travel within and outside of Scarborough by bus, I’ve been revisiting the notes that my colleague Anita and I made on the transit issues and solutions surfaced by community members at Scarborough Discourse’s second Story Circle. One solution offered by attendees was that the TTC should have extensive consultations with local residents.

Community members expressed similar frustrations over what they saw as a lack of consultation by the Scarborough Health Network, when it decided to close the pediatric and obstetric wards at SHN’s Birchmount hospital site. At a recent community open house, some attendees said they had difficulty finding information about SHN’s development plans and consultations despite actively looking for it.

Grassroots organizations in Scarborough know this challenge first-hand. Given the linguistic diversity of residents, information must be translated into several languages. Then, that information needs to be relayed somehow — whether that’s through distributing door-to-door flyers, putting up posters at community hubs like strip malls, contacting ethnic media or other methods. Even then, there are marginalized groups — all of whom have a stake in conversations about health care, transit and other issues — that may still get overlooked

Getting the word out in Scarborough about anything can be a challenge. Given how large, sprawling and transit-inaccessible this suburb is, there’s no one central hub or gathering place that all locals frequent. In fact, this is a challenge that Anita and I face ourselves, as we try our best to reach out to all of Scarborough’s diverse communities. One of my goals — especially as the weather improves — is to build awareness of The Discourse’s work here by visiting all the community centres and Toronto Public Library branches in Scarborough.

How would you design community consultations in Scarborough? Beyond translating documents into different languages, how can institutions make information more accessible to residents? Which Scarborough neighbourhoods have the most trouble accessing information about local issues? Email me your thoughts.

A major priority for Michelle West-Martin, senior director of community services at the Scarborough Centre for Healthy Communities, is to advocate for more resources for residents.

“Mental health and addictions is a big resource that we would like to see brought into the Scarborough community, [as well as] other services for seniors, home-care services,” the 33-year-old said. “We want to be able to help people live in the community. We don’t want people to have to leave community in order to get the services they need.”

Such services can be difficult for locals to access because they’re not always accessible in terms of location and cost, Michelle added: They often require “taking a bus, or walking many blocks or going into an area that you’re not necessarily familiar with. And it costs you money to make that trek to where you have to go.”

With files from Cristela Tello Ruiz

My story about SHN’s plan to close the pediatric and obstetric wards at its Birchmount site got a lot of attention on The Discourse’s Facebook page. Some commenters described how important the hospital is to residents: 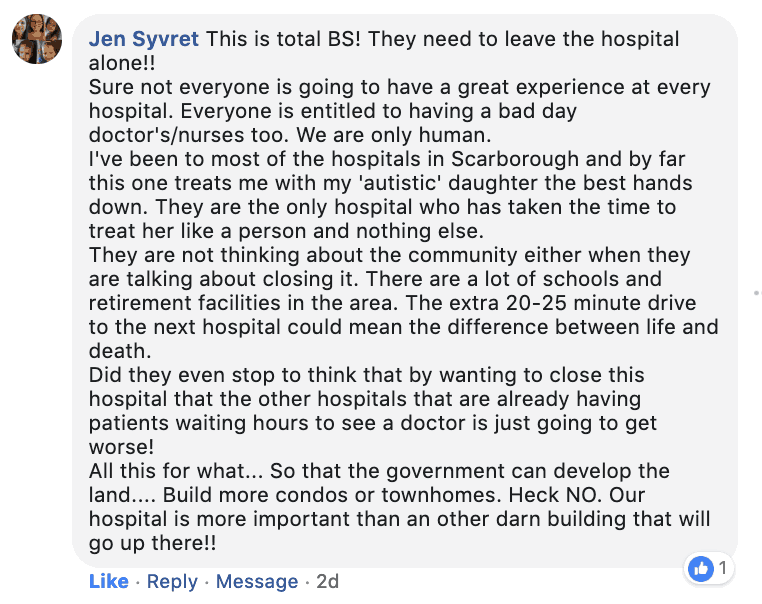 Others pointed out that several hospitals across Ontario already offer specialized services, and wondered whether the motive behind SHN’s decision was to provide better health care or to cut costs: 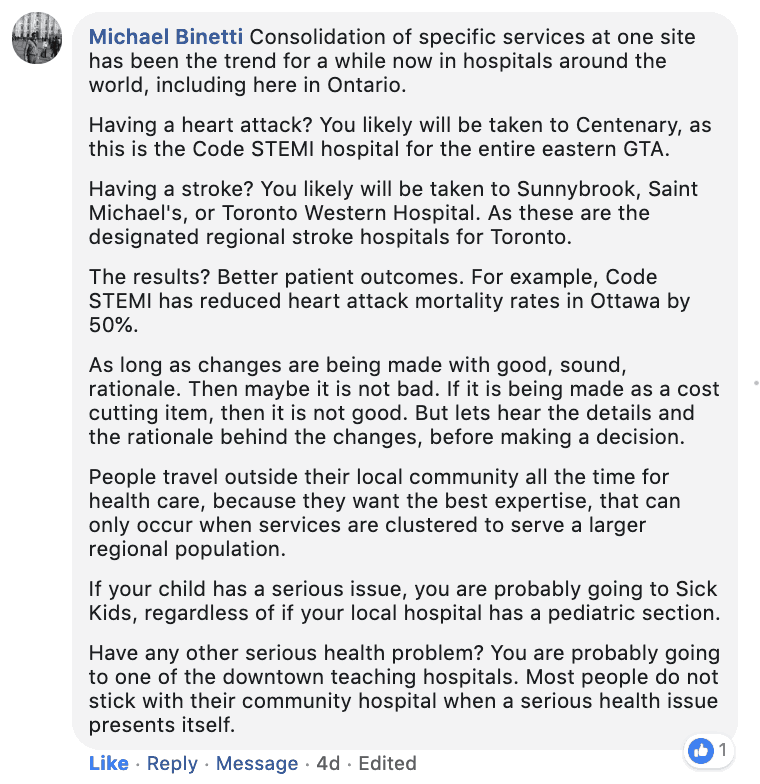 What’s your take? Are you concerned about SHN’s planned consolidation, or do you think it might lead to improved care? Email me your thoughts by responding to this newsletter.

Scarborough native and actor Stephan James shouted out his hometown in a speech when he received the Canadian Screen Awards’ inaugural Radius Award, which recognizes a Canadian in the entertainment industry who’s “making waves globally.”

After starting out in Canadian television and film projects such as Degrassi: The Next Generation and Home Again, his credits have gone on to include Selma, Race and most recently, Barry Jenkins’ award-winning film If Beale Street Could Talk. Stephan was also nominated for a Golden Globe this year for Best Actor for his role as military vet Walter Cruz in the Amazon series Homecoming, starring Julia Roberts.

“When I think about the Radius award, an award given to honour a Canadian’s contribution to the world stage, I can’t help but to trace that journey right back here — more specifically, to my hometown, Scarborough,” he said during his acceptance speech, which you can watch by clicking the above photo. “It is a place that has afforded me the perspective that has been invaluable, as I continue to navigate through my career.”

“It is a place that has taught me about pain, love, hardship and perseverance. A place where we allowed our imaginations to run wild as children, where a night like this was all just a dream. And for this, I am truly grateful.”