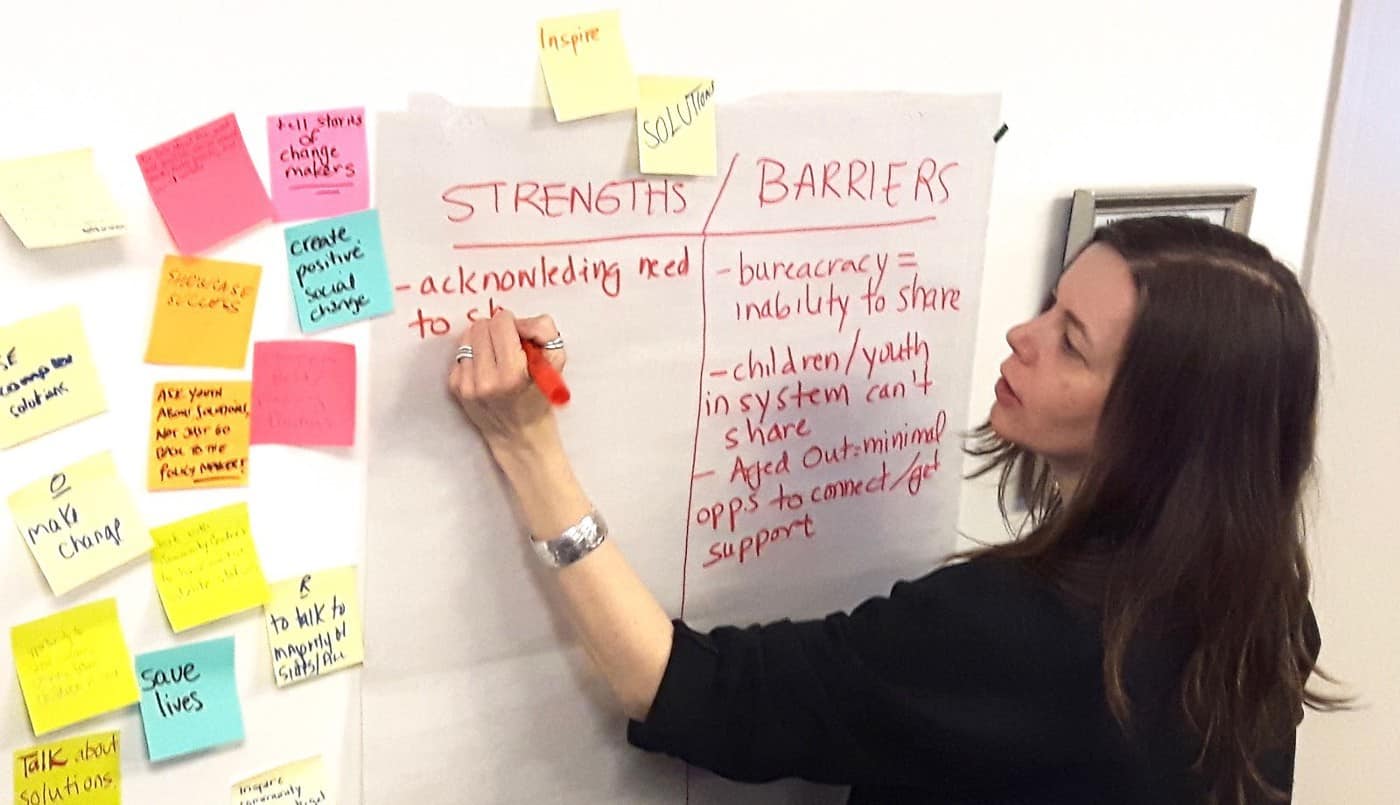 Kate Hodgson is a coordinator for Ray-Cam Co-operative Centre. She shared why it was important for her to attend: “I work with a lot of front line workers who will not work with media or are very fearful of media for very good reasons … but I’ve also seen that in our work it’s so important to have colleagues in media advance the issues that we’re talking about.”

What are the best practices for media reporting on child welfare?

On Feb. 10, 2017, we invited 25 people  —  including youth, advocates, journalists and government representatives  —  to discuss how media can improve the way we report on child welfare.

Like many people in B.C., I lack personal ties to the foster care system. I was brought up under my birth parents’ roof. So were my siblings, and to my knowledge, all of my friends. My parents never had to answer the knock of a social worker on our front door or fight for us in court. I knew the privilege of permanency — and I lacked perspective.

It wasn’t until June 2015, when I went to a “community conversation” about foster care, that I started taking an interest in the child welfare system. On that spring day, the exhibition room in Vancouver’s Roundhouse Community Centre was filled with youth who had aged out of government care, social workers, teachers and business leaders. They swarmed around flip charts, scribbling ideas for improving a system that has a knack for spitting foster kids like Alex Gervais into 17 different “placements” over a span of 11 years.

As I watched fat markers move across flip charts, I noticed “the media” was often listed as a barrier to positive social change, and it felt all too familiar. I’d seen the same thing while covering an Idle No More youth conference in Ottawa years earlier: small circles of fed-up youth around flip charts — and the word “MEDIA” scrawled in all-caps under “barriers.”

I felt embarrassed, disheartened and frustrated by a sense of missed opportunity. Both rooms were packed with the sort of people the media should arguably most aspire to serve — young, marginalized people — yet consensus was clear: they felt unheard. We were failing them.

There’s widespread distrust of media, and the default stance among advocates is a defensive one.

If you were to imagine this distrust as a triangle, you might locate government in the third corner. (Katie Hyslop points to the communication breakdown between the government and the media in this piece for The Tyee.) All in all, there’s a lot of finger-pointing and frustration. Camps are divided. Meanwhile, kids are dying.

As a reporter focused on B.C.’s child welfare system, I wanted to do something about this. So, on Feb. 10, I invited stakeholders to come together and talk about the media’s responsibility with respect to YIAFC. Twenty-five people showed up, representing all the hotspots on the triangle — youth advocates, social workers, representatives from the Ministry of Children and Family Development (MCFD), journalists, artists and community organizers. I asked this group: How can we, as media makers, leverage our access, skills and resources to help deepen and diversify narratives around child welfare? What opportunities are there for working more collaboratively?

We started by brainstorming all the responsibilities and opportunities we could think of:

And then we lumped them into themes:

Then we broke into small groups (i.e. MCFD employees worked alongside youth advocates and journalists), and we dug into these themes, asking ourselves:

This time the fat markers and flip charts told a different story about media: how we can work in service of positive social change, instead of against it. After the meeting, I condensed everyone’s suggested best practices into a list. It’s meant as a working document that we will continue to adapt and update collectively:

What do you think of this list of best practices created by the group? What would you change or add to the list? We view this as a living document and we’d love your feedback.

As for next steps, we’re working to mobilize a task force of media makers committed to leveraging our respective resources to deepen and diversify narratives around child welfare. We’ve heard that youth in and from care crave paid opportunities for skill development, so we’re looking for media partners with capacity for mentorship and an interest in working with young people who want to develop their storytelling and investigative skills. Finally, we’re looking for community partners that are interested in creating spaces where people with connections to the child welfare system can share stories with each other (StoryCorps-style) or anonymously submit story ideas.