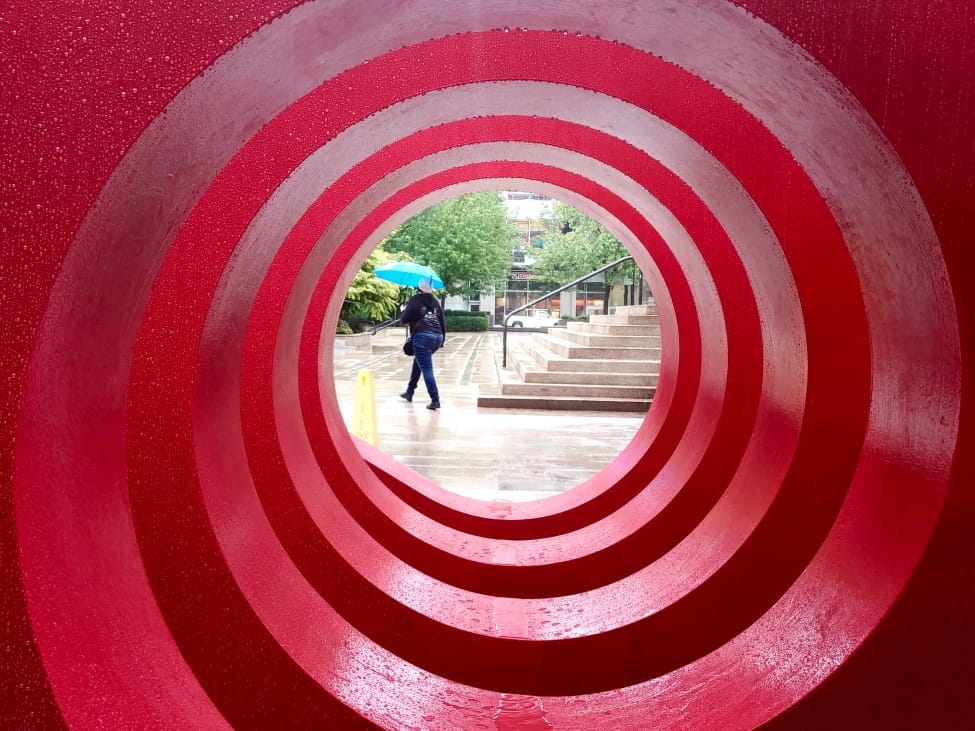 In the plaza outside Vancouver's Robson Square courthouse, pedestrians walk by this sculpture. Brielle Morgan/The Discourse

The Discourse has been following "Justine's" case for months, as she fights to get her kids out of B.C.’s foster-care system.

To recap, the trial began in March 2018, and The Discourse has been following this Indigenous mother’s journey through the courts as part of our investigation into B.C.’s child-welfare system. Cases like this play out across British Columbia by the hundreds, according to data obtained from B.C.’s Ministry of Children and Family Development. Every year, social workers find 23,500 children are in need of protection, and the ministry applies to permanently remove about 700 of these kids from their families. More than half of these kids are Indigenous.

A family court judge spent five days hearing Justine’s case in March before it was adjourned. Now the court will spend seven more days hearing the case over the next two weeks, before it’s  adjourned again — until October 2018. Meanwhile Justine’s four daughters will remain in their temporary foster placements.

To hear from 15 or so witnesses takes considerable time: this has been a point of tension since the trial began. The court doesn’t want to rush a case that will decide whether children are returned to their family or permanently separated, but at the same time there’s a recognition that these girls and their mother are living in a state of limbo.

This tension peaked on Monday when Susie Gray, the ministry’s lawyer, told the court that after the trial was adjourned in March, she hadn’t confirmed the availability of a certain psychologist — who will be presenting the results of Justine’s parenting capacity assessment — before she and Carrie Humchitt, Justine’s lawyer, agreed on dates for the trial’s continuation. This admission prompted a speech from the judge.

“I am perplexed about setting dates without witnesses’ availability being checked,” Judge Lyndsay Smith told the court. “I just don’t get that.”

“Once [the psychologist’s] unavailability was ascertained in April, nobody brought it back before the court to set the earliest dates that could be set,” the judge continued. “And we’re now looking at October for continuation dates for a matter that started in March where there’s four little kids involved.”

In light of this reality, Judge Smith said she’ll initiate a discussion about reinstating Justine’s visits with her kids before this stretch of the trial wraps up next week.

“Delay in these cases is just so hugely problematic from a practical perspective because every day that there is lack of resolution, there is uncertainty in children’s lives,” she said. “To have a child who has had her second birthday, not seeing her mom for over a year, when there’s so much literature out there about attachment … we’re going to have the discussion about it.”