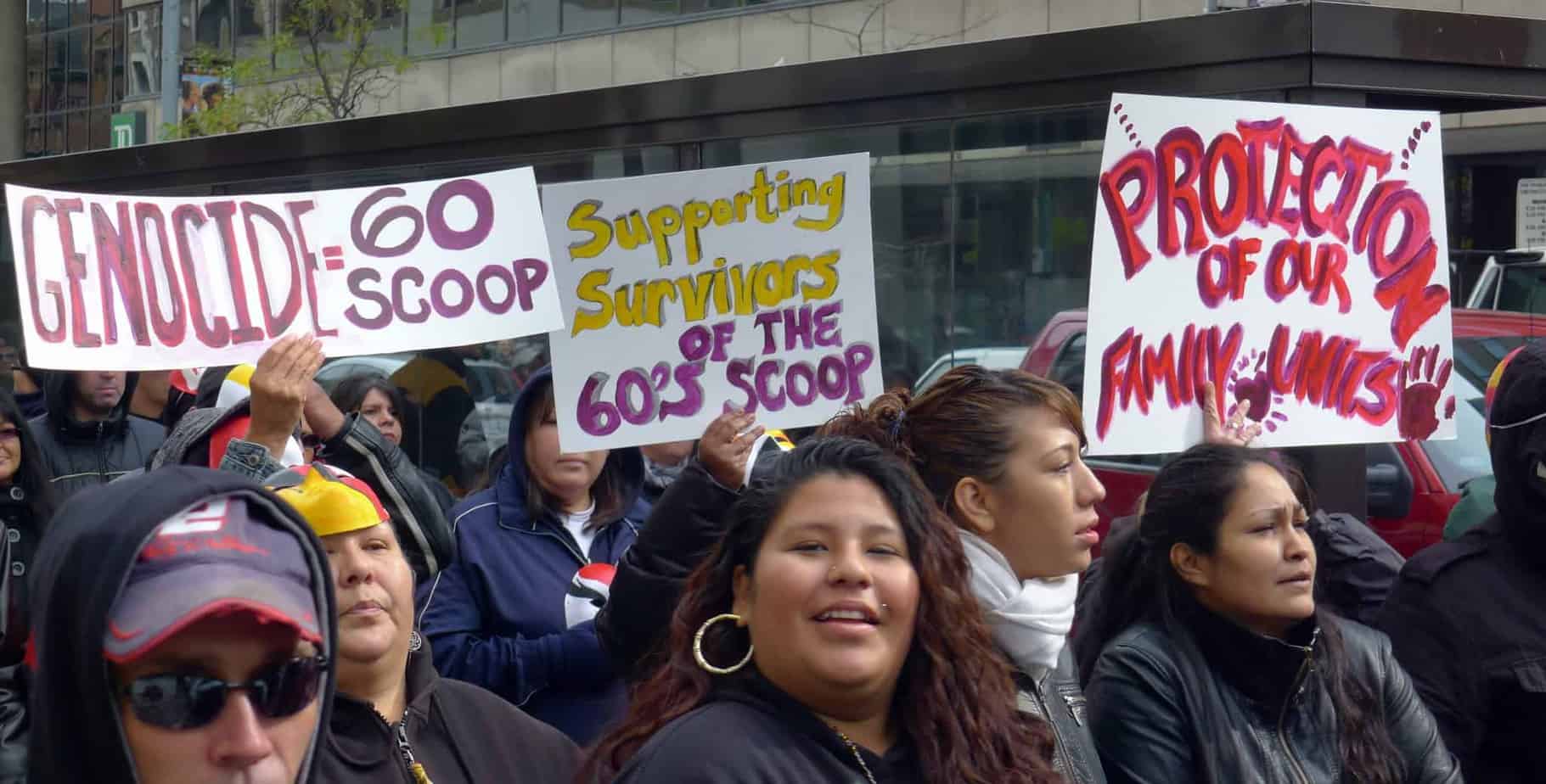 Protestors at a ‘60s Scoop march at Allan Gardens in Toronto, 2011. Photo by Crystal Luxmore/Flickr.
Okanagan

Due to the COVID-19 pandemic, administering the federal government’s $875-million class-action settlement for ‘60s Scoop survivors has been delayed, according to the claims administrator. The Congress of Aboriginal Peoples says thousands of survivors have already been waiting three years for settlement payments, and continue to do so despite interim payments having been approved to go through on June 1.

The ‘60s Scoop refers to a practice that was orchestrated by the Canadian government and began in the 1950s. It involved Indigenous children being taken or “scooped” from their homes on the reserve and placed into primarily white foster homes across the country in an effort to assimilate.

The settlement agreement was agreed to in principle in November 2017, and approved in August 2018. It’s meant to compensate survivors for “the loss of culture and language” they experienced during this time and the “underlying impact of misguided past policies.” Up to $750 million of the settlement is for Status Indian and Inuit who were adopted by non-Indigenous families, became Crown wards or who had been placed in permanent care homes between 1951 and 1991.

Due to pandemic measures adding to the pre-existing delays, the federal court approved interim payments of $21,000 for each eligible individual on June 1. According to Collectiva, the claims administrator, of the 34,767 applications that were received before the deadline of September 2019, 36 per cent (12,551) were determined eligible as of March 16. Additionally, 14 per cent have been fully rejected and 4 per cent have been determined not eligible.

Left in the dark

Shirley Corrie, a ‘60s Scoop survivor from ʔaq’am reserve in Cranbrook, B.C., says she’s experienced a lack of communication from Collectiva, which has left her to believe “the money was never coming.”

Corrie says she was scooped from her family’s home on Aug. 12, 1965 when she was just over a month old. She explains that she applied for the settlement in 2017, but did not hear from the claims administrator for three years before she received a confirmation letter saying she was eligible for payment.

“I think I was angry, I wanted to know why, I felt discriminated against,” says Corrie. “There’s people out there that really need the money. They put their heart into doing something with the money and it wasn’t coming.”

“Collectiva, you know, they didn’t keep up their website. They didn’t like to have any information. It was very, like, we’re in the dark. They were great to begin with, now they have stopped. … They are just hiding behind this COVID thing.”

According to the ‘60s Scoop settlement’s official website, social distancing measures due to the pandemic have made face-to-face consultations difficult for applicants who might need more information to support their applications.

Based on Collectiva’s March report, 20 per cent of applicants need additional information in their applications.

Another cause for delay is due to the fact that a considerable amount of information needed by the administrator to assess these applications is stored in provincial archives, many of which are currently closed.

“I am hearing many folks are still waiting for approval letters and many have also missed the deadline,” says Colleen Cardinal, co-founder of the Sixties Scoop Network, a community organization that raises awareness for survivors.

“It took a lot of strength for people to submit their claim and, for many, waiting is taking a significant and understandable toll,” he says, explaining that eligible applicants were originally supposed to begin receiving payments in the spring of this year.

“In March, between COVID-19 and the greater than expected challenge of locating survivor records, Class Counsel (the team of lawyers) recognized that we needed to take action to help keep the process moving. That’s why we went to court to secure interim payments for eligible Class Members (applicants). We also worked closely with the other parties to ensure that no one’s application would be denied as a result of the impacts of COVID-19, right now, the process is moving.”

IndigiNews reached out to Collectiva, which declined direct comment, but forwarded communications to Klein Lawyers to speak on its behalf.

As of now, Collectiva is continuing to review and approve applications, but has placed a hold on denying any, which has also contributed to the delay in payments.

Applications are denied if the administrator cannot prove if the applicant is registered Indian under the Indian Act, entitled to be registered, is unable to confirm that they were removed from a home in Canada, is unable to confirm that they were placed in long-term care with non-Indigenous parents as defined by the settlement agreement, or if their application is missing information needed to process it.

Therefore, they have also suspended deadlines for those whose applications require more information in order to be assessed.

“As Class Counsel, we are here to ensure that every single eligible Class Member receives the compensation they are owed. To our Class Members, I say, ‘I know this is a long journey, but we are here to support you through it,’” says Lennox.

Corrie, who continues to wait, says she wants her fellow survivors to know they are not alone.

“I just like to say that, anyone that has been scooped, you know, I feel for them because it’s a, it’s a really heartbreaking cycle that has happened,” she says. “I hope the ‘60s Scoop [settlement] will be able to help the people that are in need of healing and I hope [they] get the professional help that they require.”