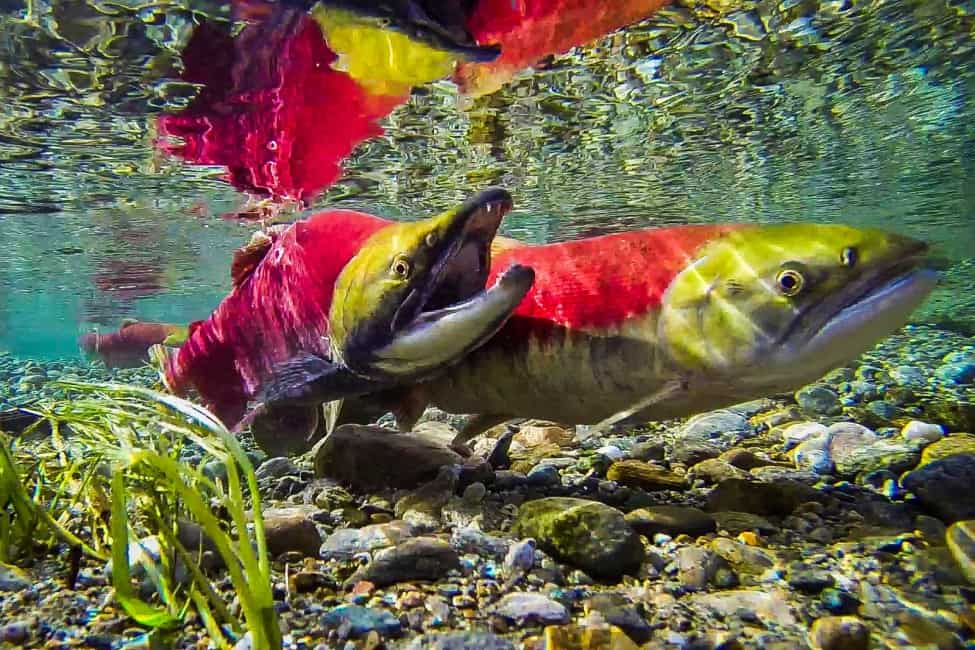 How microplastics get into the food system

Telling thought-provoking stories about social and environmental challenges related to Canada’s progress on the UN’s Sustainable Development Goals, which is like a giant to-do list for making the world a better place.

Plastic debris — ranging from particles too small for the naked eye to see to metres-long industrial fishing nets — affects the health of all kinds of sea life. In the worst cases, it can be deadly.

Animals mistake some plastic for food or accidentally ingest it, while other types of plastic, especially fishing gear, can entrap or injure them. The results — like this viral YouTube video of a sea turtle with a straw in its nose — can be harrowing. According to one study, more than half of sea turtles have ingested some form of plastic, including floating plastic bags they mistake for jellyfish. In addition, sea life and birds snap up small pieces of plastic, such as styrofoam bits, that look like fish eggs.

Scientists are increasingly concerned about what microplastics — that is, plastic less than five millimetres long or about the size of a sesame seed — could be doing to life below water, especially when it is eaten or ingested.

“It absolutely does contaminate every level of the food chain,” says Chelsea Rochman, an ecologist at the University of Toronto who found that one in four fish purchased from fish markets in Indonesia and the U.S. had man-made debris, including plastic or microfibres, in its guts. Scientists have also found microplastics in oceans, lakes and rivers worldwide, including all three of Canada’s coasts, the Great Lakes and Lake Winnipeg.

Where do microplastics come from?

Microplastics come from a variety of sources, ranging from marine industries to your laundry. Some microplastic particles are created when larger pieces of plastic, such as water bottles and polystyrene floats used by marine industries, are exposed to the elements, become brittle and break down.

Plastics deteriorate at different rates depending on what chemicals were added to them when they were made and the environment that surrounds them, ranging from the concentration of salt in the water to temperature. There is little information about how quickly different types of plastics break down into microplastics in the environment. But, even when it becomes too small to be seen by the naked eye, plastic poses big environmental risks because it may take centuries to biodegrade.

In other cases, plastic is already small to begin with. Nurdles, which are tiny plastic pellets used to make plastic products, have been found on beaches all over the world, including on Vancouver Island, after being lost at sea or leaked into the environment during plastic production.

Additionally, cleaning, health and beauty products, including cleansers and toothpastes, sometimes contain plastic microbeads, though these are being phased out from toiletries in Canada. Synthetic clothes also release plastic microfibres into the wastewater stream when they’re washed.

Scientists have also recently begun to study nanoplastics, which are less than one millionth of a metre in diameter, but we know even less about them. They may form when microplastics break down or during industrial processes like 3D printing.

How do microplastics move through the food web?

Microplastics enter the food web when animals accidentally ingest or eat them. At the bottom of the food chain, zooplankton, which are microscopic organisms eaten by all kinds of fish, ingest small pieces of plastic that can wind up in the bodies of the animals who eat them. When animals eat other animals that have already ingested plastic, they consume that plastic too.

In other cases, large animals, such as humpback whales, which filter water as they move,  ingest microplastics directly. Microplastics have also been found inside mussels, oysters and clams, which filter several litres of water per day, on Canada’s eastern and western coasts, sparking concern among growers in B.C.

In fact, there are so many trillions of microplastics floating in the ocean that 5 Gyres, an advocacy group based in California, has taken to calling it “plastic smog” and, in some areas along B.C.’s coast, the concentration of zooplankton is the same as the concentration of microplastic, says Peter Ross, director of the ocean pollution research program at the Vancouver Aquarium.

Eventually such particles can move all the way up to predators at the top of the food chain, including the orcas off B.C.’s coast, which face risks from a variety of chemicals, including those in plastic.

In 2015, Ross and other scientists estimated that juvenile salmon in coastal B.C. consume two to seven microplastic particles per day inside the zooplankton they eat. Sockeye salmon swimming into the coast from the North Pacific could also transfer any plastic in their system to the grizzly bears who eat them, says Ross.

Animals at the bottom of the ocean are also at risk. Scientists have found plastic fibres in crustaceans in six of the deepest points in the Pacific Ocean, according to a study published in 2017.

Small, round microplastics like bits of styrofoam and nurdles are particularly insidious because they resemble fish eggs. “Eggs are really a target for any species because eggs hold [many] nutrients,” explains Brittany Buirs, marine debris coordinator at the Ucluelet Aquarium in Ucluelet, B.C. She notes that, unlike real eggs, which animals carefully protect, egg-like debris appears free for the taking. “If anything’s resembling an egg, it’s most likely going to be eaten.”

A juvenile rockfish swims past lingcod eggs in Barkley Sound in February 2018. Some marine animals eat small bits of styrofoam, mistaking them for eggs. Peter Mieras
Freshly laid herring fish eggs on the east coast of Vancouver Island at Madrona Point. Peter Mieras
Nurdles interspersed with other debris at Willows Beach in Victoria, B.C. David Boudinot
David Boudinot, a librarian at the University of Victoria who has been studying and cleaning up nurdles on local beaches since 2016, holds up nurdles he collected on San Juan Island, Washington. David Boudinot
Nurdles are so small that they're hard to spot, and can easily be confused with shells. University of Victoria librarians David Boudinot and Daniel Brendle-Moczuk collected these nurdles from Willows Beach in Victoria, B.C., in 2016. David Boudinot
X

Plastics are “rife with contaminants,” says Jessica Melvin, a researcher studying plastic ingestion in fish at the Memorial University of Newfoundland. Plastics often contain flame retardants, colourants and other chemicals before they enter the ocean. Once there, they absorb other pollutants in the water, accumulating as much as a million times more chemicals than surrounding water. Research indicates they can have a variety of negative effects on marine life that ingest them, including reducing survival, changes in immune function and reproductive stress.

Some animals, including birds, are at risk of not taking in enough nutrients and starving because plastic pieces they consume can trick them into feeling full. But fish don’t face these same risks, says Melvin. For them, the issue is the chemicals the plastics contain. “Fish eat crabs and rocks and everything. They have no problem passing these things, but it’s the acidic environment of their digestive system actually moving the contaminants into the fish.”

Where does that leave humans?

Ultimately, plastics or the chemicals they contain could end up on your dinner plate. In fact, if you eat shellfish, they probably already have.

Should you be worried? Scientists aren’t sure.

“We really don’t know what the human health impacts of eating microplastic particles are. This is still new science and there’s a lot of work to be done here,” says Christopher Pearce, research scientist with the Department of Fisheries and Oceans.

The health benefits “far outweigh probably” any risk from microplastic, he says. “You’re probably breathing in a lot more microplastic particles right now than you would get in a shellfish.”

For better or for worse, microplastics also surround us. They’re in our tap water and the air, and have been found in honey, beer and salt.

“There are tiny invisible particles of plastic present in basically all foods and in all environments. So it should come as no surprise that we are taking some of this in,” says Peter Ross of the Vancouver Aquarium.

“The extent to which that might be harmful, remains very much unclear, but I don’t think there is cause for panic at all.”

Even so, with a truckload full of plastic entering the ocean every minute, no end is in sight.

This piece was edited by Rachel Nixon, Discourse Media’s executive editor, with fact-checking and copy editing by Jonathan von Ofenheim. Special thanks to Peter Mieras for select photography.