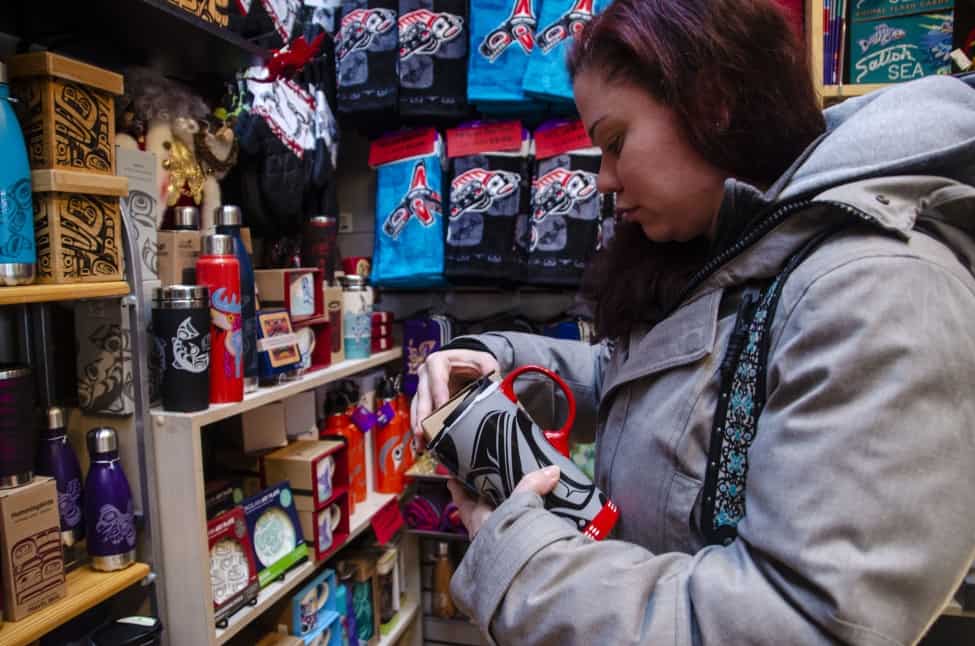 Knock-offs are everywhere. Here’s what you need to know to avoid buying a fake.

You’ve fallen in love with an Indigenous carving and want to take it home. But before you do, it’s important to make sure the piece is authentic, and the artist is being fairly compensated for their work.

So here are three things to consider if you find yourself debating an Indigenous art purchase.

1. Look for the Indigenous artist’s name and nation

Some products have labels that tell you about the artist and their nation. Items as small as keychains can have that information, says Nadia Belokopitov, who is Haida and owns Cedar Root Gallery in Vancouver, an Indigenous-owned and -operated store that sells Northwest Coast artwork.

”We have the artist’s name, their nation and, like, a little biography on the artist,” she says.

But not all stores will have clear labels. Anthropologist Solen Roth remembers picking up an Inuksuk in a store in Vancouver that said “made by a native Canadian,” and wondering exactly what that meant.

When she called to enquire, Roth says the company told her it meant ”somebody born in Canada.” Which, as Roth points out, could easily be easily misinterpreted as an Indigenous artist. She thinks the company was “playing on this ambiguity.”

Roth was part of the international research team that put together a guide for store owners called Think Before You Appropriate in 2016. The guide offers advice to avoid misappropriation ”and underlines the mutual benefits of responsible collaborations with Indigenous artists and communities.”

2. Ask questions if you see a ‘Made in Somewhere-else’ label

If an item was made outside of Canada, with no credit to an Indigenous artist, that could mean the product is a knock-off.

In some cases, though, artists will negotiate licensing agreements with companies who mass-produce products overseas featuring their designs, like travel mugs, hats or umbrellas. But Lou-ann Neel, a Kwakwaka’wakw artist, says part of the challenge with such agreements is that companies may not be paying the artists a fair percentage or royalty.

”The company may choose to give the artist, you know, 0.5 per cent on every item, which isn’t a lot of money, and might add up to a few bucks after a few sales,” she says. ”But when you consider how much the company is making, compared to what the artist is making, there isn’t any fair dealing here.”

If you see something that looks authentic, the best thing to do is ask the staff what they know about the licensing agreements and even reach out to the artists themselves, she says.

”A lot of the artists are on Facebook and Instagram,” Neel points out. ”And so I love using social media as a way to raise the awareness. So I would tell people if you spot something, click a quick picture of it, look up the artist on Facebook or Instagram, send them a picture and say, ‘Is this your work? And are you aware of it?’”

3. Talk to store staff about their dealings with Indigenous artists

”Consumers have the right to know that they’re buying something authentic, or not,” Neel says. She encourages shoppers to ask staff questions about the Indigenous art on their shelves.

Asking who the artist is, where they’re from and how they’re compensated can tell you more about the authenticity of a product.

Neel’s niece, moccasin maker Jamie Gentry, says a big red flag for her is if the staff can’t tell you where the product comes from.

”I used to make quilts, and so I’d go to the fabric store and they started selling, like, Northwest Coast-inspired fabric designs,” she says. When she couldn’t find information about the artist, she started asking staff but ”nobody knew anything. They just said that, you know, the company just sent it to them, they don’t know anything about it.”

Part of the problem with fake Indigenous art, she says, is that it’s ”empty.”

”There’s so much more behind our culture,” she says, ”and I think when you buy from an artist you make that connection.”

Buying fake art also ”takes away from the artists who are actually making the product.”

But when someone buys a piece of genuine Indigenous art, they’re taking the time to learn and understand more about the artist’s culture, she continues. ”We need more dialogue. We need people asking questions.”

Gentry says a white customer recently reached out to her to ask if it was okay to wear the moccasins she had just purchased. ”Please, please wear our work,” she told her. ”I wouldn’t put my work out there if it wasn’t okay for everyone to wear.”

”It’s not like it’s meant for ceremony or, you know, it just has specific uses. I’m making this for people to wear. It also spreads awareness,” she adds.”When you’re wearing that product and people approach you to ask you about it… it opens up more dialogue.”

”I thanked her and I told her that it’s, like, beautiful that she’d reached out,” Gentry says. ”We need more dialogue, we need people asking questions.”