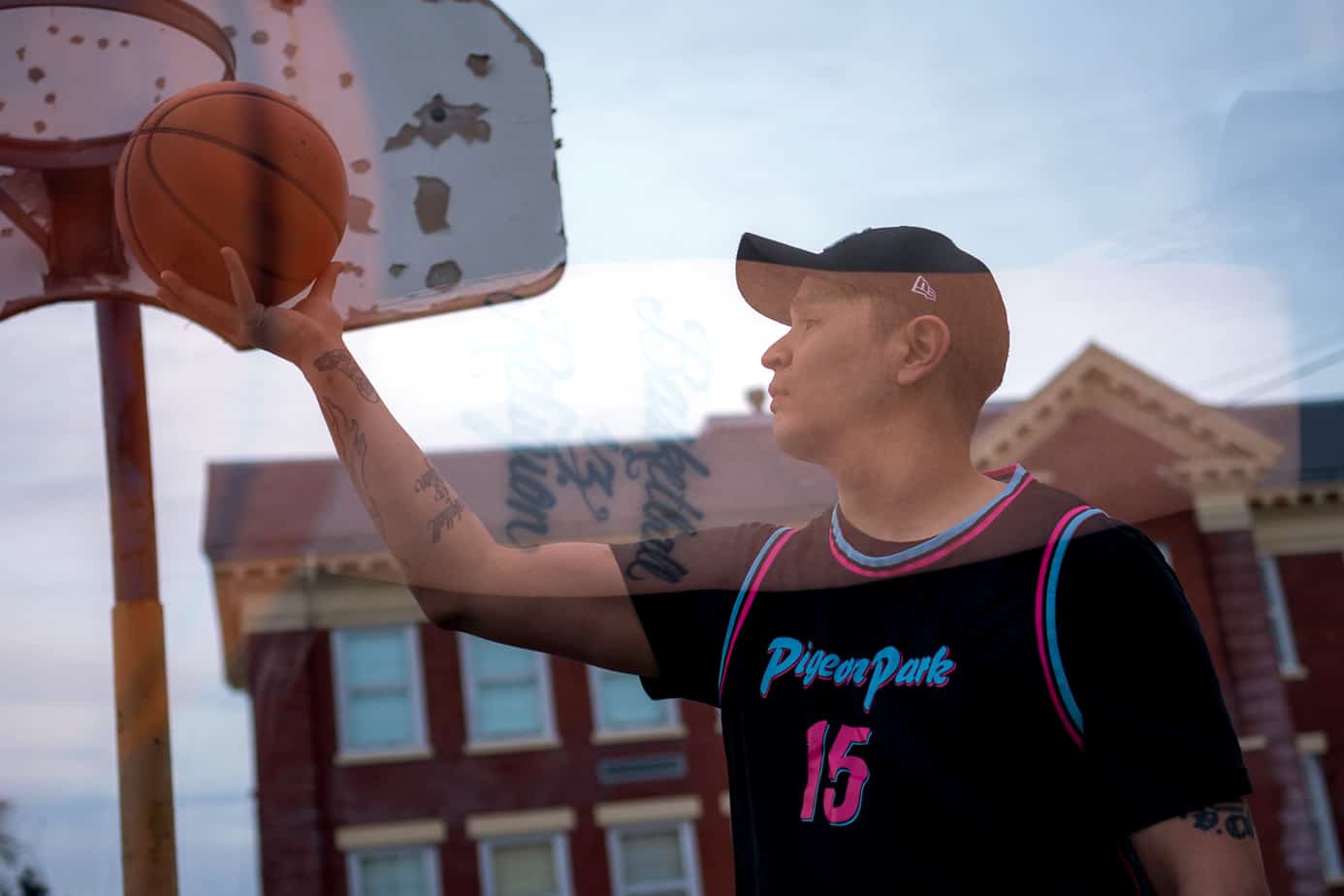 Gene Wolff learned how to play basketball on the cement courts of East Van parks and schoolyards. His team, the Pigeon Park Allstars, placed second at the 2019 All Native Basketball Tournament in Prince Rupert. Wawmeesh Hamilton/The Discourse
Urban Nation

“As an urban club team, it gave us an opportunity to give this platform for the youth,” says Pigeon Park Allstars captain.
Wawmeesh Hamilton
Support this work. Tell a friend.

A derelict elementary school sits behind temporary green metal fences cinched with the occasional padlock, its windows and doors boarded up with plywood on a cold February afternoon in Vancouver’s Renfrew-Collingwood neighbourhood.

In the schoolyard behind the old building, Gene Wolff is shooting hoops, while his young son looks on. The empty silence on the school’s grounds is broken by the basketball he is bouncing off the charcoal-coloured asphalt, and a metal clang as the ball hits the chipped white backboard and drops through the rusty metal basket.

“I used to shoot hoops back here when I was growing up,” Wolff tells me, as he lines up another shot. “I started playing basketball when I was about 10 years old in the streetball courts around Pandora Park, Hastings Elementary School.”

Wolff just returned from Prince Rupert, a small port city of about 12,000 people on B.C.’s northwest coast. His team — the Pigeon Park Allstars — just competed in the 60th annual All Native Basketball Tournament which ran from Feb. 10 to 16, 2019, where they placed second in the senior men’s division.

After losing their first game to the storied Skidegate Saints — who have won six of the last eight All Native tournaments — Pigeon Park came back to win their next six games and defeat Skidegate in the semi-finals. “We didn’t know if we were going to win or not, but beating Skidegate was pretty much our championship,” Wolff says.

In the end, the Pigeon Park Allstars lost in the finals to the Kitkatla Warriors, but Wolff is proud of the eight games they played and how they grew as a team, one game at a time.

According to the All Native website, the tournament started as the Northern British Columbia Coast Indian Championship Tournament in 1947. Though it fizzled a few years later, the tournament was revived in 1960 and now draws about 600 players from 51 teams and up to 4,000 spectators from as far away as Ahousaht on the west coast of Vancouver Island, Hydaburg in Alaska, and Metlakatla just north of Prince Rupert. The men’s and women’s teams mostly come from First Nation communities, but a few urban Indigenous clubs play too.

Unlike their Skidegate rivals from the traditional territory of Haida Gwaii, who honed their game in a gymnasium, most of Pigeon Park’s urban players, who herald from a number of First Nations, grew up playing ball on the gritty cement playgrounds of East Vancouver. It was here that they honed their skills and their love for the game and the family that they found in each other and on the court.

“We honour our concrete just like people honour their trees. We play streetball, while all those folks might be playing in their gym every day,” Wolff says.

It’s no coincidence that he named the team after Pigeon Park, which sits in the heart of Vancouver’s Downtown Eastside. Many Vancouverites see the park as a blight in a neighbourhood already deeply troubled by addiction and crime. But Wolff sees the park a bit differently: “I see it as a foundation of who I am.”

To understand more deeply why the team is named the Pigeon Park Allstars, you have to understand the road Gene Wolff has walked on his life’s journey.

Wolff, 38, is a member of the Nisga’a Nation, but he and his older brother Richard were born in East Vancouver, where their late mother Beverly Guno raised them. With no immediate family nearby, the family struggled on its own.

Growing up in the city can be tough, he says. “Not to downplay what other people go through, but sometimes it’s a little bit more averse in the city because everything is so spread apart and we don’t have immediate family, we don’t have people that we can connect with every day to sit there and say, ‘Hey, are you okay? Do you need food?’ These are things I never had,” Wolff says. “Growing up, it was me and my brother and we figured it out. We survived.”

For awhile, Wolff lived near Pandora Park in the Hastings and Nanaimo area, then in Mount Pleasant near China Creek, then on Franklin Street. “Pretty much all the cornerstones of East Van,” he says. He went to a lot of different elementary schools as the family moved around East Vancouver.

Today, he’s proud of his East Van upbringing, and proud to be an Indigenous man. He even has a tattoo on his left arm that says, “Prodigy of East Van.” His right arm sports its own tattoo: “Basketball is religion.”

But being Indigenous in East Van wasn’t easy when Wolff was growing up. “Back in the ’90s, people there didn’t like native Indigenous peoples. It was really tough,” he says. “I actually wasn’t proud to be Indigenous. I actually hated myself a lot of the time.”

Pigeon Park on East Hastings Street wove itself into Wolff’s life when his mother struggled with addictions and would drop him off there as a child. “It wasn’t really as bad and dark as it is now, but it was a safe place where parents could just drop off their kids and all the kids could play with each other for a bit there, where they’re running around in a park and stuff,” Wolff says.

He would spend hours in the park playing with other kids while their parents tended to their addictions nearby, he says.

Pigeon Park is a foundational part of his life and not a blot on it, he continues. It taught him survival, tenacity and resilience — for basketball and for life.

“It [Pigeon Park] means being able to utilize my past, my history, what I’ve been through as a platform, as an educational tool to help other youth that may be going through the same thing,” Wolff says. “If you utilize these things as tools, experiences and strengthening characteristics, you can overcome anything. Pigeon Park, for me, is that.”

It’s been nearly 30 years since Wolff learned to play basketball on school playgrounds and city park courts. Some of his earliest East Van Indigenous teammates still play with him today.

He formed the Pigeon Park Allstars in 2005, and filled the roster with players from those early years, or “strays” from their First Nations, as he calls them.

Among those strays are three teens recently brought into the fold, who made the trip to Prince Rupert last month. Among them is high school guard James Harry Jr., who is one of Pigeon Park’s youngest players.

Harry spent his childhood in the First Nations village of Haisla in Kitimat, B.C., with his parents and older brother and sister. The family now makes its home in Metro Vancouver, where Harry is in his final year at Terry Fox Secondary School.

Although just 18, Harry has played basketball ever since he started walking, he says. “My dad coached junior boys in Kitimat, and I was running around with him in my diapers,” he recalls of his earliest basketball memory. His dad and uncles were his first coaches, he adds.

Harry played with the Vancity junior boys Indigenous team, and was on the team that won a BC Junior All Native Basketball Tournament in 2017.

To Harry, playing with Pigeon Park was a chance to play with Wolff and teammate Gary Edgar, both of whom he considers legends of the game.

For Wolff, it is important to give youth like Harry the opportunity to experience the All Native tournament, both for the calibre of play on the court and for the gathering of Indigenous peoples from all over B.C.

“I think the whole atmosphere and tradition of playing for your nation is very powerful,” he says, “but there’s a lot of strays. There’s a lot of underprivileged and unlucky kids who will never experience the All Native because they don’t have communities going to the All Native. So, as an urban club team, it gave us an opportunity to give this platform for the youth.”

“And it doesn’t really matter how old you are,” he continues. “As you can see, we did it with three 18-year-olds, two who were starting, so it just proves that anything is possible when it comes to giving people an opportunity.”

Back at the elementary school grounds, the last rays of an amber sunset cast across the snow on the empty playing field. Wolff cups his hands together, blows warm air into them and calls it a day. “It’s getting pretty cold and I have to get my son home,” he says.

The snow on the playing field dryly scrunches with each step as we head towards the growing roar of traffic on Kingsway Avenue.

Watching his son, Wolff says he’s proud of his roots and where he grew up, and the place Pigeon Park will always have in his history.

“I’m proud of where I’m from,” he continues. “I don’t regret being raised or growing up around these situations, because now I have an opportunity to share that story with people.”

“We have a huge long history of Indigenous in East Vancouver,” he says. “I’m extremely proud to be Nisga’a, born and raised in East Vancouver and I hope to bring that pride to East Van as well.”

This piece was edited by Robin Perelle and is part of our ongoing coverage of the urban Indigenous community in the Lower Mainland. Sign up here for our Urban Nation newsletter.