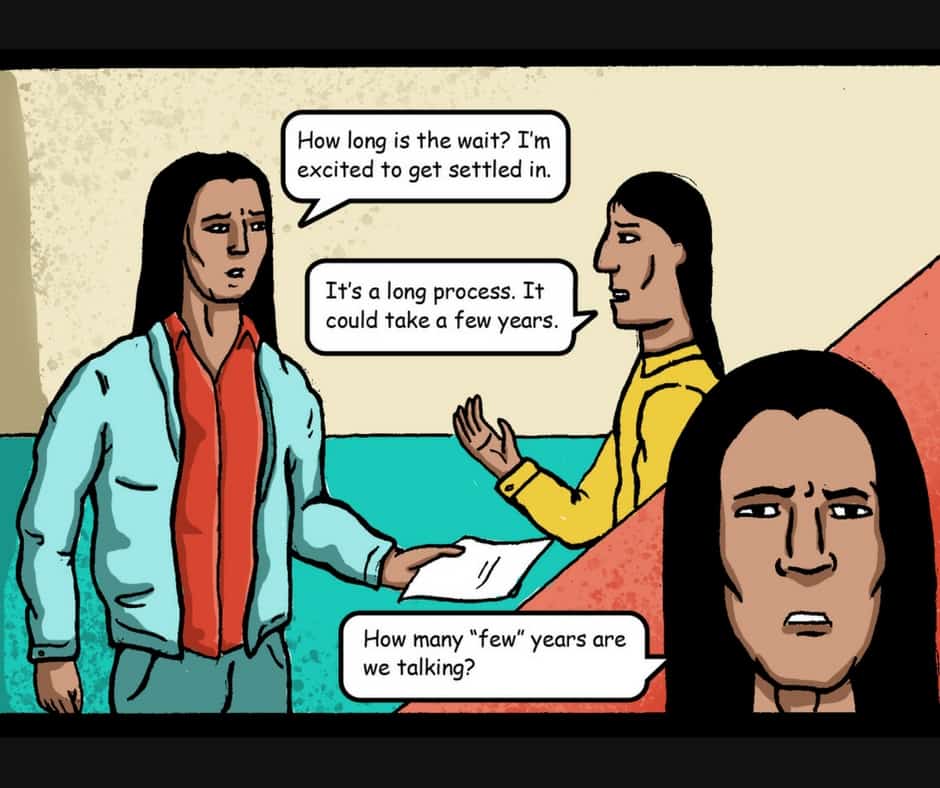 Tales from the Tenant: The quest for housing in a colonized country

A comic explainer on the challenges of finding First Nations housing on reserve.
Francesca Fionda and Joshua Pawis-Steckley April 4, 2018
Support this work. Tell a friend.

Wait lists, mould, overcrowding — when it comes to housing, the 634 First Nations communities across Canada face different challenges. While it’s impossible to capture all their experiences, this comic aims to reflect some aspects of the housing crisis on reserve, and start a discussion about the solutions some communities are implementing.

This is the first in a series of stories looking at the housing crisis on reserve. In the months to come, The Discourse will be investigating poor housing conditions, broken government promises to eliminate mould and the challenges faced by remote reserves, as well as who should have jurisdiction to address these problems and what support might be needed.

And for a look at the challenges and advantages of searching for housing off reserve in larger Canadian cities, continue reading our second adventure, Tales from the Tenant Part II.

[annotate info=”It was important for Ojibway artist Joshua Pawis-Steckley to draw Ella with braided hair as a symbol of Indigenous cultural empowerment. Braids, he says, are a common hairstyle within many First Nations cultures as people reclaim their identity and cultural expression.

From the 1880s to the end of the 20th century, Indigenous children across Canada were forced into residential schools, punished for practising their own cultures, had their hair cut off and were given “Christian” names — all in an effort to “kill the Indian in the child,” as the Truth and Reconciliation Commission acknowledges. Verbal, physical and sexual abuses were also rampant in the schools.”]Why Ella has braids[/annotate]

Why Ella has braids

It was important for Ojibway artist Joshua Pawis-Steckley to draw Ella with braided hair as a symbol of Indigenous cultural empowerment. Braids, he says, are a common hairstyle within many First Nations cultures as people reclaim their identity and cultural expression.

From the 1880s to the end of the 20th century, Indigenous children across Canada were forced into residential schools, punished for practising their own cultures, had their hair cut off and were given “Christian” names — all in an effort to “kill the Indian in the child,” as the Truth and Reconciliation Commission acknowledges. Verbal, physical and sexual abuses were also rampant in the schools. 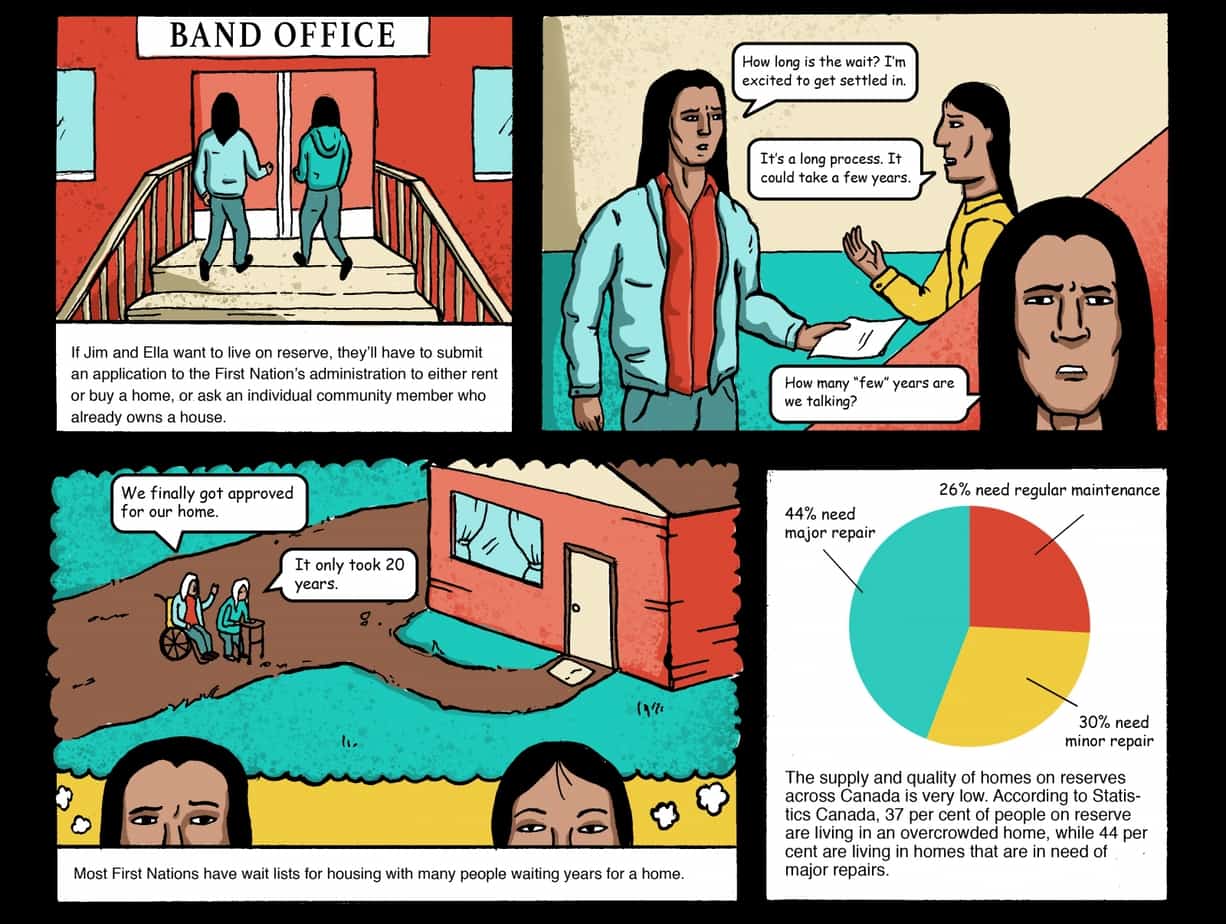 [annotate info=’When reserves were first established in Canada in the 1800s, colonial settlers pushed Indigenous Peoples off their resource-rich homelands and forced them onto allocated plots in an effort to assimilate them. They imposed their systems and values onto Indigenous communities, and even established how Indigenous Peoples should govern themselves.<br><br>When it came to housing, homes were designed without taking into account Indigenous culture, families and lifestyles. They were often poorly built on a small government budget.<br><br>As reserves were established, the federal government took over many services that would normally fall to municipal and provincial governments off reserve, without clearly specifying which responsibilities would fall to the federal government and which would remain with the nations.<br><br>Each Indigenous community across Canada has a different relationship with the federal government.<br><br>Today, some First Nations governments have established their own housing authorities. Housing authorities have varying degrees of decision-making power and responsibilities. How they are structured and what they can or can’t do is determined by the chief and council.’]Who is in charge of housing?[/annotate]

[annotate info=’There are several ways to own property on reserve, including customary rights, leases, independent land codes developed under the First Nations Land Management Act and Certificates of Possession or CPs. No matter which route an individual takes, they will not have title to the land beneath their home; the government continues to have title to the land.<br><br>In some cases, individuals who want to own or build a house have to apply to the First Nation. The nation will apply to the federal government for a house, seek a loan and ask the government to guarantee it. The community will then build the house, and the individual member will sign an agreement with the band to pay the mortgage.<br><br>If the individual doesn’t make the payments, the house will remain community-owned and the individual could face eviction. If the agreement holder pays off the mortgage, they’ll own the house.<br><br>In some cases, an individual can apply directly to a bank for a loan (with their nation’s support and a guarantee from the federal government), but banks are often reluctant to give loans to people on reserve because they can’t seize the government-owned land in case the borrower misses payments. However, in the last few years, a few more banks have been willing to offer private financing.’]Owning a home on reserve[/annotate] 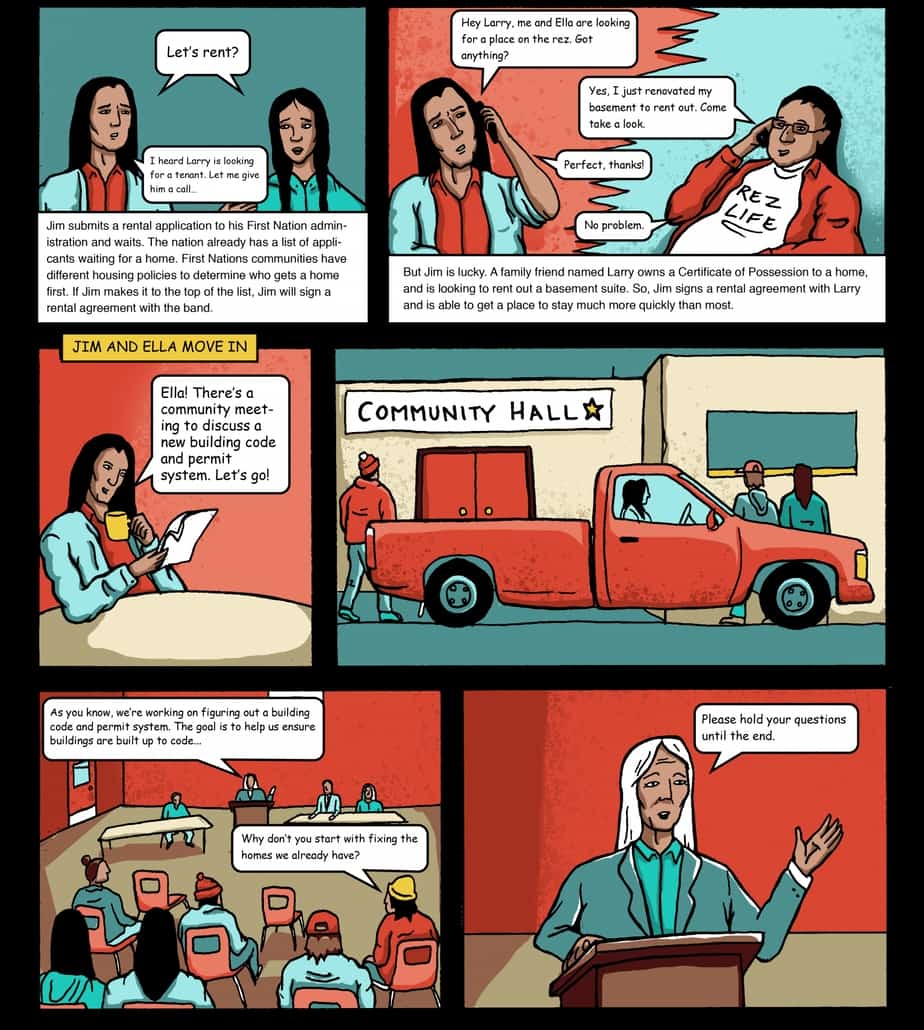 [annotate info=”Most provinces have landlord-tenant laws that outline the rights and responsibilities of renters and landlords off reserve. But on reserves, because there are no federal services to oversee residential tenancy, it’s up to First Nations communities to create their own systems, and these systems vary across Canada.<br><br>Without clear on-reserve rental policies, rental rights can be a confusing area of law where jurisdiction between the federal and provincial governments isn’t always clear or consistent.<br><br>If there’s a tenancy dispute on reserve that can’t be resolved, and the First Nation doesn’t have dispute resolution policies, the tenant can bring the matter to the provincial superior court — though this can be costly and time-consuming.”]Tenants and landlords on reserve[/annotate] 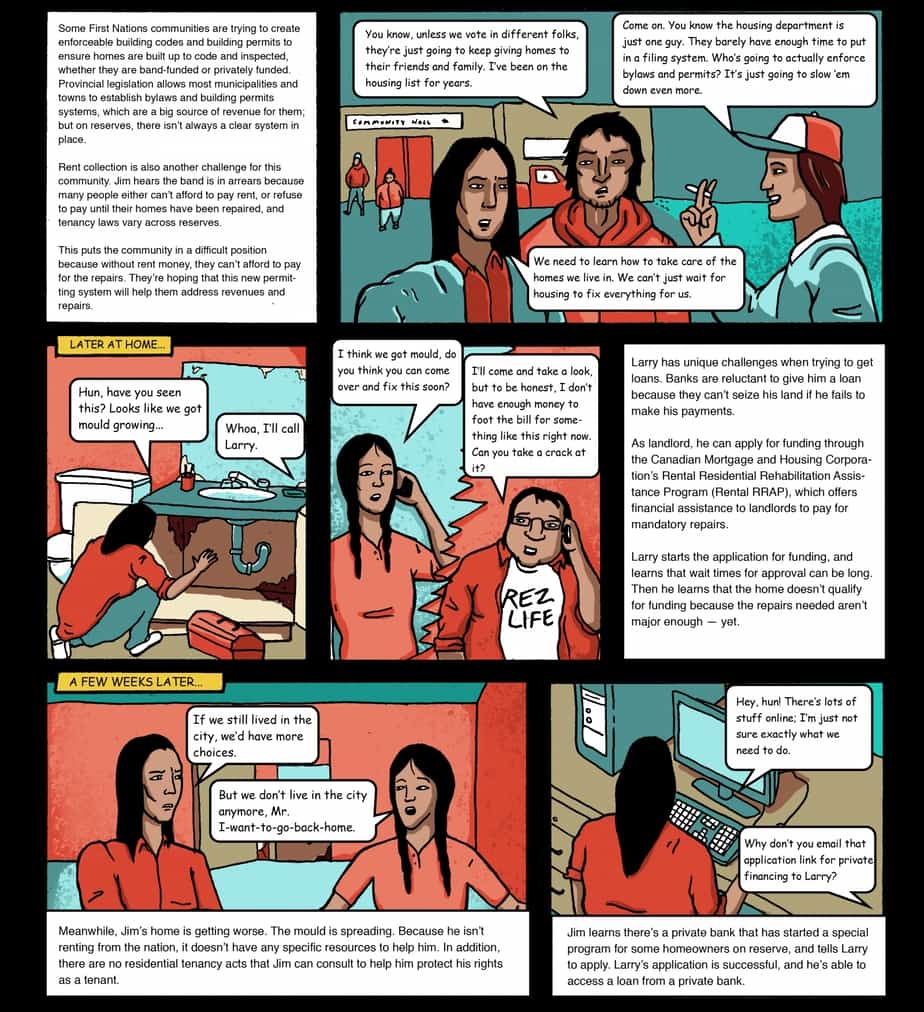 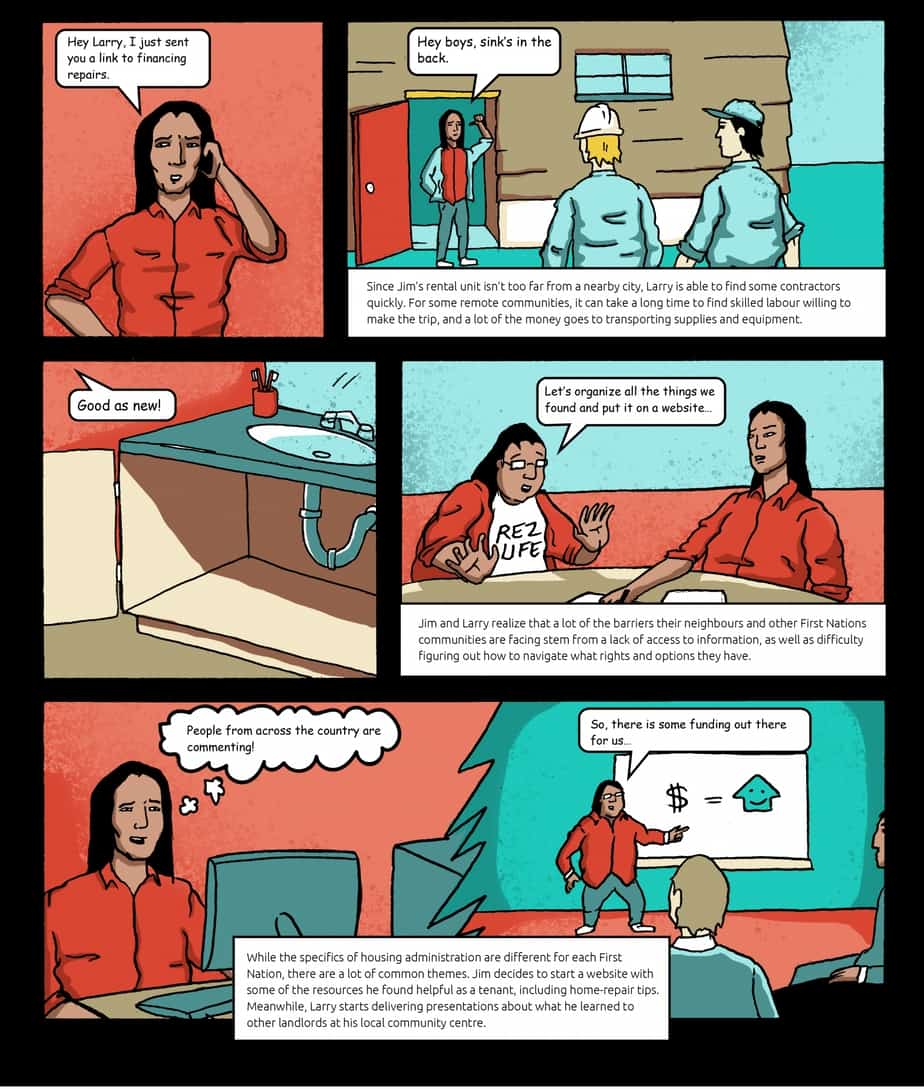 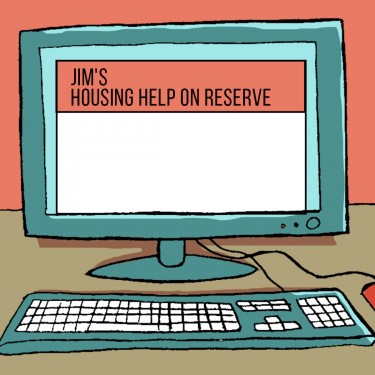 Help us write the ending.

What resources would you want to see on Jim and Larry’s website?

Tales from the Tenant Part II

Read on for our second fictional couple’s story of big-city living, including the challenges of finding affordable housing and their search for resources for renters. 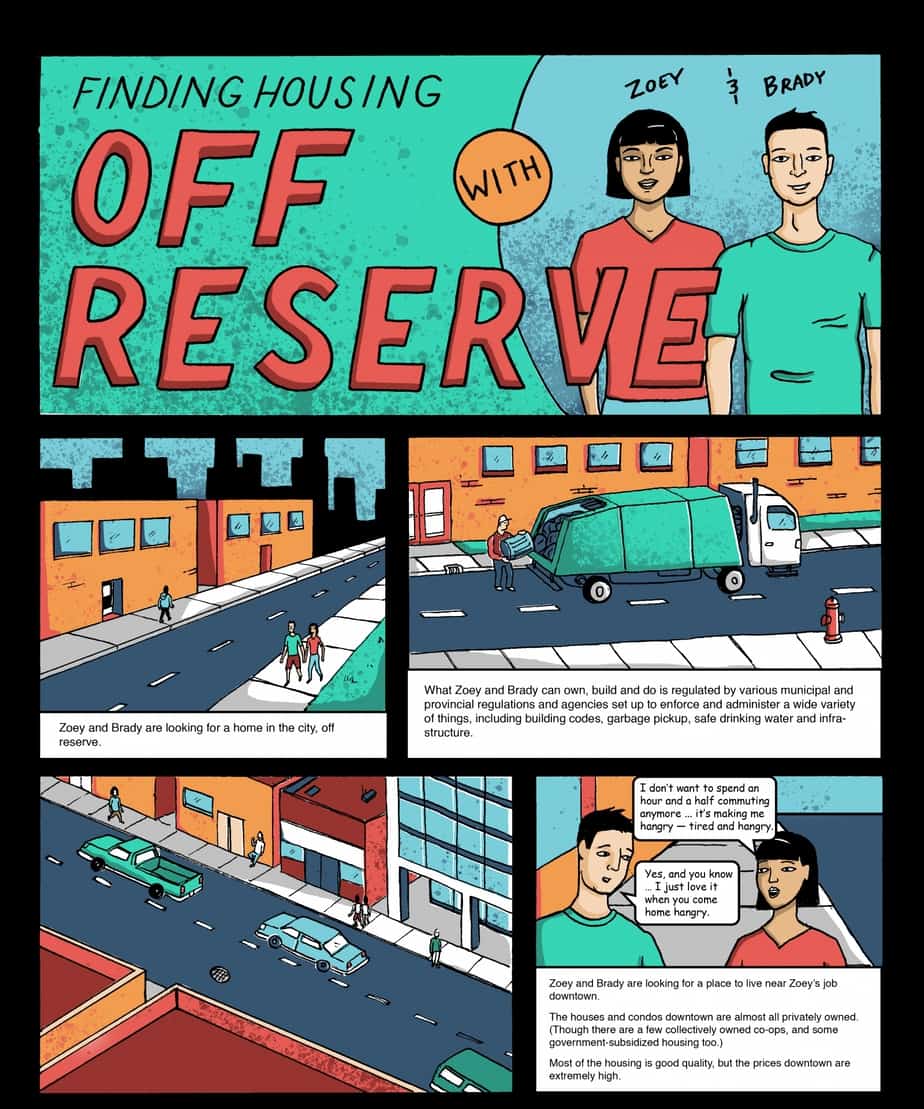 [annotate info=’Off-reserve housing is regulated by federal, provincial and municipal governments.<br><br>Generally, the federal government provides financial support to non-profit societies, co-ops and social housing. But in 2017, the Liberal government released Canada’s first-ever national housing strategy, and recognized housing as a human right. The plan promises to invest $40 billion over the next 10 years to cut homelessness in half, and improve housing for more than 500,000 families by building new homes and repairing old ones. It also promises to work with First Nations, Métis and Inuit communities as partners to address their housing needs.<br><br>Off reserve, provinces are responsible for the main laws that govern tenants and landlords, including dispute resolution.<br><br>Municipal governments create bylaws and policies that complement provincial legislation. They also create policies that regulate the development of rental housing, including rules about density and how high you can build.’]Who is in charge of housing in cities?[/annotate] 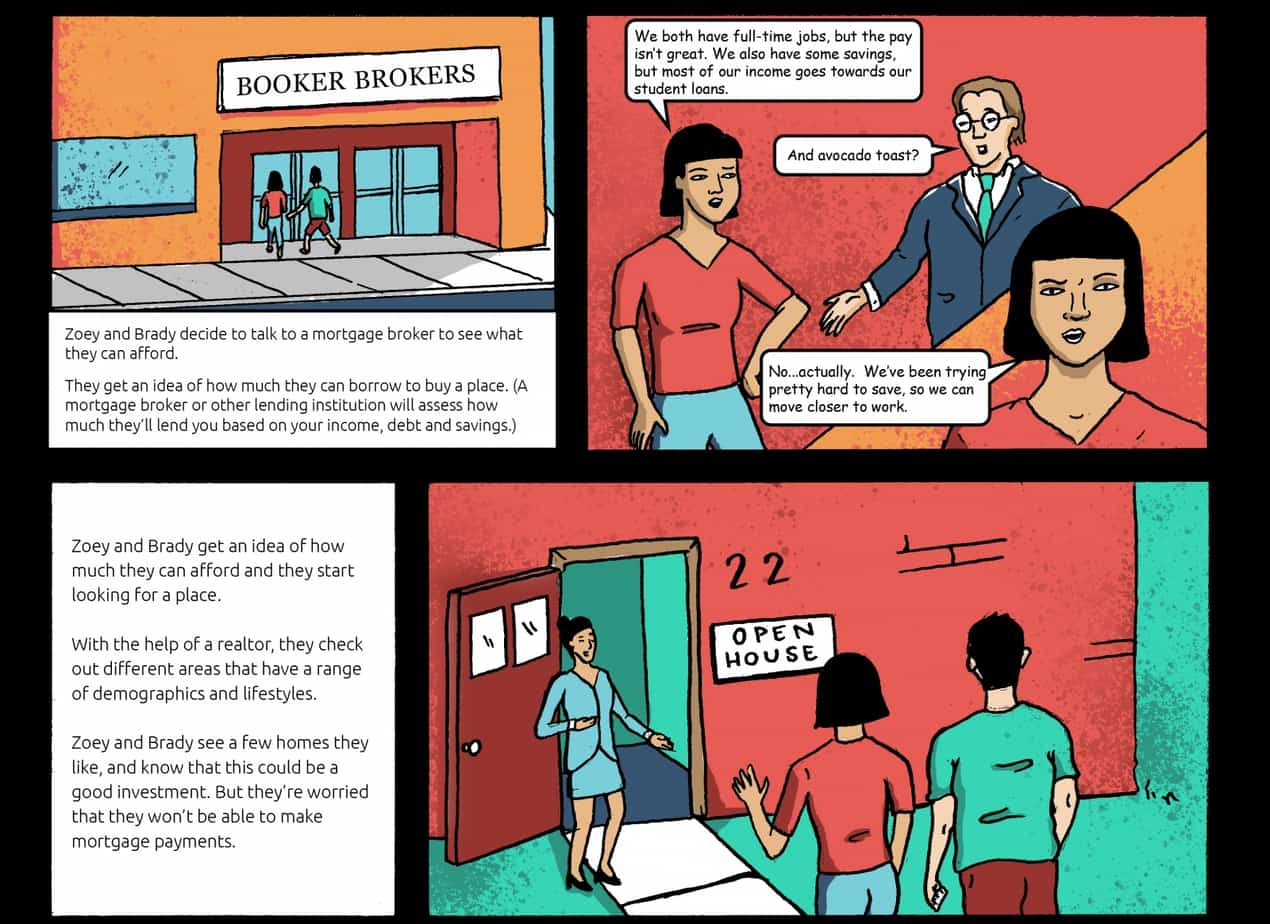 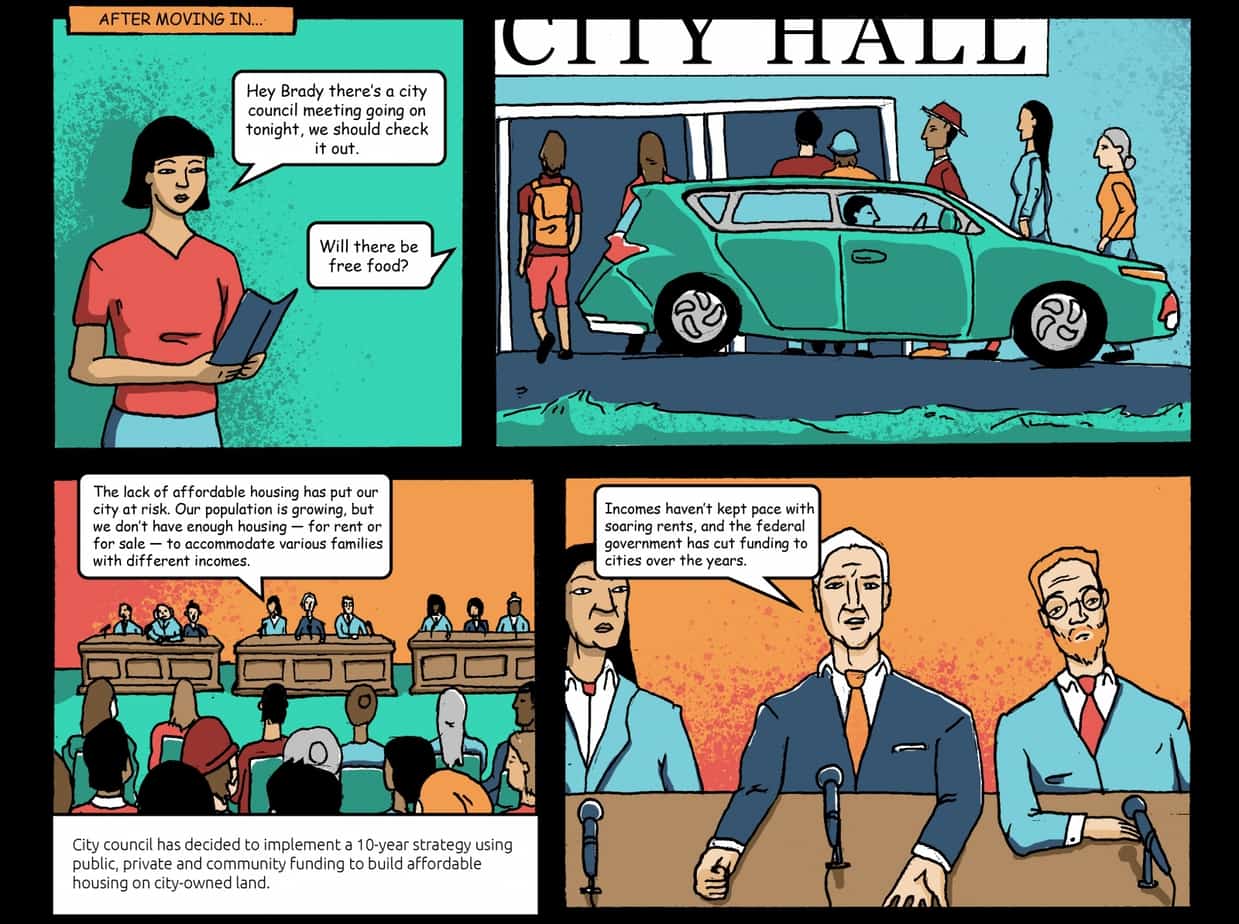 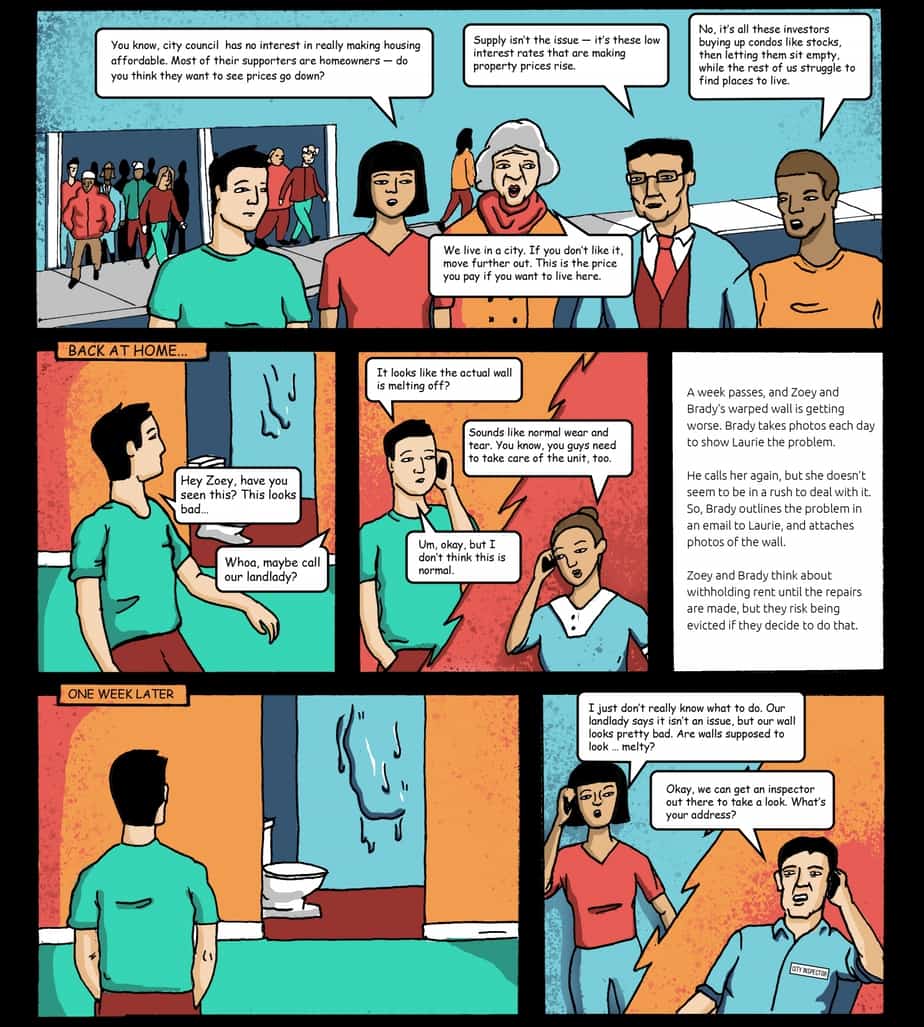 [annotate info=’Each province has its own residential tenancy laws that generally outline things like how much a landlord can charge for a security deposit, how rent increases are handled and where you can go for help.<br><br>Provinces and territories generally have tenancy branches, boards or services separate from provincial or superior courts to handle dispute resolution. There are also local rental authorities and advocacy groups that can help.<br><br>For example, in B.C., dispute resolution is done through an administrative tribunal called the Residential Tenancy Branch where no lawyer is required to bring a complaint forward.’]Tenants and landlords off reserve[/annotate] 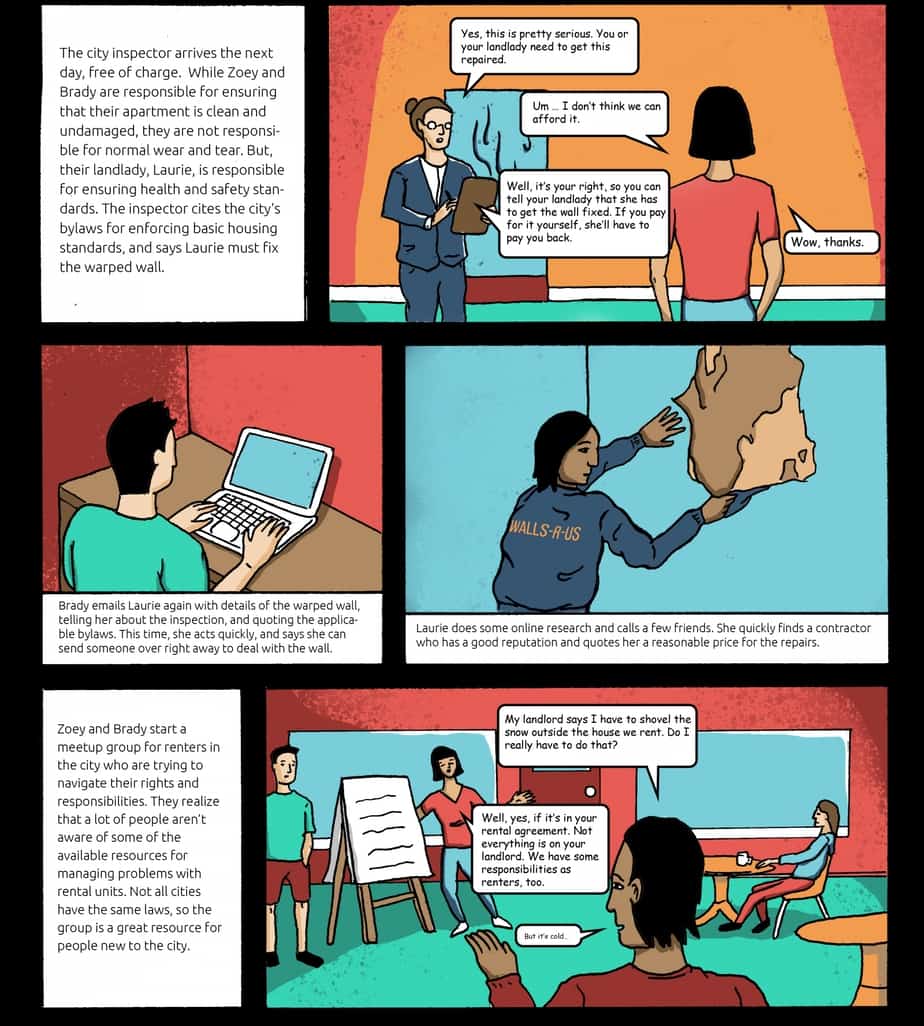 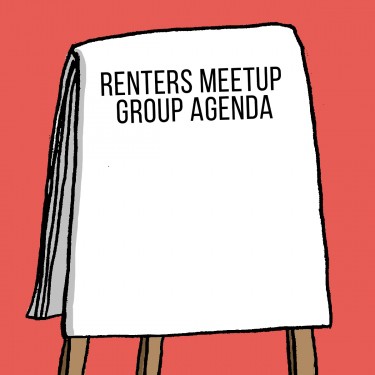 Help us write the ending.

What topics would you want to see on the agenda for Zoey and Brady’s next meetup?

This story is part of ongoing coverage looking at First Nations housing on reserve. Follow Francesca Fionda and Wawmeesh Hamilton’s coverage with hashtag #FirstNationsHousing and subscribe to the data newsletter and reconciliation newsletter.

This piece was edited by Robin Perelle and Anita Li, with fact-checking and copy editing by Jonathan von Ofenheim. With files from Wawmeesh Hamilton. Illustrations by Joshua Pawis-Steckley. The Discourse’s executive editor is Rachel Nixon.