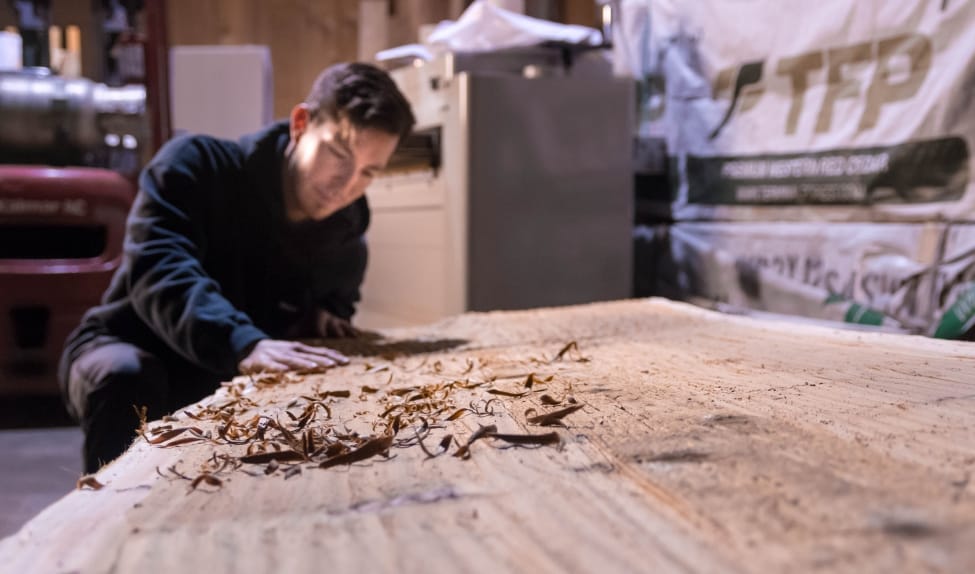 How can we compete with cheap fake art from overseas, Indigenous business owners ask?

‘I’ve seen these poor carvers that are trying to carry on their culture, and they’ve got to compete with something a quarter the cost that comes in from Indonesia,’ says Shain Jackson.

In a North Vancouver studio, Spirit Works employee Jordan Dubois is working on a feast table made from a 20-foot-long cedar tree. Soon, he will start shaping the table, then carving Indigenous designs into it, before a community someday gathers around it to share their stories and a good meal. Elsewhere in the studio, several other employees are working on authentic West Coast Indigenous art of their own.

It’s early April and Spirit Works is ramping up production after a brief lull, as owner Shain Jackson scares up business. Meanwhile, just a short Seabus ride away in Gastown, a Discourse investigation found three quarters of the souvenir shops in Vancouver’s tourist hotspots are busy selling inauthentic Indigenous art and gifts, produced without any collaboration with Indigenous people.

Like a handful of other small, Indigenous-owned businesses in B.C.’s Lower Mainland, Spirit Works Limited employs Indigenous people to create authentic Indigenous arts and gifts that share their stories and world views, in accordance with Indigenous values. But Jackson says he struggles to prosper in a lucrative market saturated with knock-off Indigenous-themed merchandise produced cheaply overseas.

So what is the future of authentic, Indigenous-owned businesses making art and gifts designed by Indigenous artists in their own unceded lands?

“We pay great royalties on our designs but at the end of the day, why should we be competing with somebody on the other side of the world to make Coast Salish or Kwakwaka’wakw art or any other kind of artwork?” Jackson asks.

Back in the studio, production has been quiet since January. In theory, business should be hopping. A 2018 Vancity and Canadian Council for Aboriginal Business survey (which Jackson participated in) found the Indigenous tourism industry is “experiencing remarkable growth.”

The survey cited statistics from Indigenous Tourism B.C. that show a 33 per cent increase from 2014 to 2016 in the number of Indigenous tourism-related businesses in the province. These numbers include Indigenous-led businesses involved in arts and culture. More than 60 per cent of the respondents to Vancity’s survey also said they expected their business to experience an increase in gross sales revenues within the next two years. Yet, despite these metrics, Jackson says he’s had to take on personal consulting contracts to help support Spirit Works.

Historically, Indigenous art has been produced since time immemorial, a 2008 Canada Council for the Arts fact sheet notes. But its inclusion in euro-western fine art only started between the 1950s and 1960s. Contemporary First Nations art “began to be noticed” in the 1960s, the fact sheet states, and was first exposed to a global market at Expo 67 in Montreal.

Today, Jackson says, about 80 to 90 per cent of Spirit Works’s clients are “Indigenous governments, Indigenous individuals, Indigenous organizations.” But the Indigenous-themed gift market — which should be a source of prosperity for a company like his — remains elusive, flooded by inauthentic knock-offs that make it difficult for him to compete.

These inauthentic pieces are impacting his livelihood, he says. “Where we make our money is not in the gift market.”

Even using technology such as engravers to produce their necklaces, Jackson says it’s still hard to compete “with people that are making $1 a day, or a few dollars a day” overseas to make knock-off jewelry sold at a lower price.

“I don’t hate these people,” he hastens to add.

“Don’t get me wrong, I feel for these people. I’ve travelled in a lot of these poor countries. I feel bad that they’re in the position that they’re in. If I was starving, when somebody offered me an opportunity to feed my family — it goes back to that old adage,” he says. “Is it wrong to steal if you’re stealing food for your family, or something like that.”

It’s the intermediaries that he takes issue with. “I have no pity for the middle person that’s doing this,” he says. “That’s literally pitting us up against them to see who can come up with the cheapest, the lowest-priced stuff.”

“I grew up very poor. I know vulnerability,” he continues.

“This business here provides… jobs for up to 10 people,” he says, referring to Spirit Works. “Five, six full-time people. That’s money coming into our community. It’s actually not a lot. It could be a really good living.”

Still, he says, he strives to pay his employees fairly. “Everybody makes a fair wage in the studio,” he says. But he wishes the team would prosper from producing artwork from their own culture that has a hot market right now.

“You know, it would be nice to make out — to be able to not just eke by as an Indigenous company — but to actually make a good living, to actually prosper.”

Hopefully, that will come someday, he says.

“We make a living, we’re not suffering,” he adds. “But we’re not prospering the way that you could if the market was just solely Indigenous.”

The competition from fake pieces mass-produced overseas impacts independent Indigenous artists who are trying to make a living, too, Jackson notes.

“I’ve seen these poor carvers that are trying to carry on their culture, and they’ve got to compete with something a quarter the cost that comes in from Indonesia.”

To Jordan Dubois, the issue boils down to one word: China. “It puts us in competition against China. Our stuff is real and more expensive,” he says, “so they [fake art buyers] might try to buy the fake stuff, but then we don’t sell our stuff, so we lose out on it. I don’t know. It’s not good for us, that’s for sure.”

The team at Spirit Works is skilled, Jackson says. Their work is handcrafted and “a lot of our stuff is, like, done in the older ways.” Of course they use some technology, he acknowledges, but his employees are hand-steaming their traditional boxes, for example, and hand-gluing them. Their hands “are on everything,” he says.

“How do you compete with something that’s either made by a machine in China or made by somebody making $1 a day in China out of bamboo or something and they’re out there?”

On the Capilano reserve, Pam Baker, who is Squamish-Kwaguilth and whose traditional name is Himikalas, owns Copperknot Jewelry. She, too, produces authentic Indigenous pieces, but finds it tough to compete against mass-produced inauthentic goods from overseas.

“It gets quite frustrating because those Native artists and designers cannot compete with the prices because a lot of their products are stuff made overseas,” she says. “My business, Copperknot Jewelry, we attempted very hard to compete yet it’s hard to produce when you got very low budget, you know.”

She remembers seeing salt and pepper shakers shaped like totem poles made in Japan in the 1970s. The practice has since morphed, and today she sees Indigenous designs splashed on everything.

“I’m going to quote one of my aunties who’s 85. She said, ‘I never thought I’d see the day that you had Chilcotin designs on flip-flops and shoes,’” Baker says. “And she was pretty disgusted because, you know, people are stepping on the design.”

Baker’s micro-operation normally employs two people, but sometimes as many as six, to craft and assemble an authentic Indigenous line of jewelry.

But tourists often base their purchasing choices on price tags rather than authenticity. “They would rather, let’s say, buy a pewter necklace made from a cast overseas that you’re going to buy for $12.99,” she says, “compared to my cast necklace that we’re selling these for $20 retail — and we’re making no money off of it, of course.”

“So hard to compete with that — and our pewter is way better,” she adds. “We mix it ourselves here.”

Back at Spirit Works, Shain Jackson says as an Indigenous business operator, he tries to do everything right. He employs Indigenous people and he follows Indigenous values. The company also gives back to the community through weaving workshops and workshops for kids, and gifting of monuments to Indigenous communities, he says. But it’s still a tough slog in a market saturated with fakes.

Using pendants made at Spirit Works as an example, Jackson says they are sanded, stained, polished and boxed on site, yet are sold for very little in order to compete with fakes made cheaply overseas.

And the overseas producers don’t do anything to support the Indigenous communities whose art they’re replicating, he points out. They don’t hold workshops, support the culture, create jobs or uplift local artists.

“That stuff that we have to do is just to provide our social license within our community. Overseas, they don’t have to do any of that and they won’t, they don’t care,” he says. “They don’t have an obligation to the communities that we live in and we work in.”

This story is part of a series on fake Indigenous art in the tourism industry. It was edited by Robin Perelle and fact-checked by Francesca Fionda. Cloe Logan contributed research.