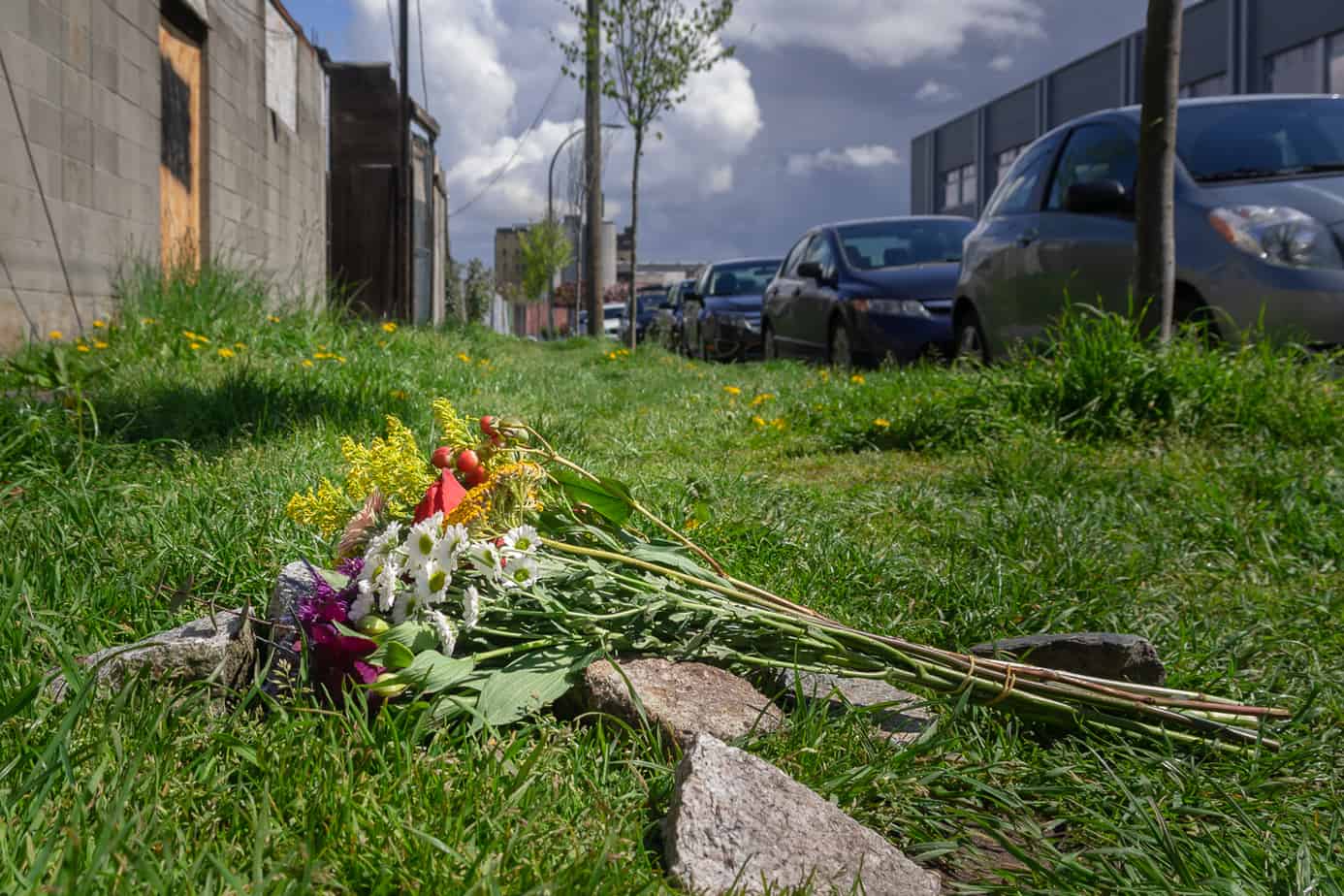 A bouquet of flowers laid over a cross made of stones marks the spot in an East Vancouver industrial area where a woman died of a drug overdose two weeks ago. Wawmeesh Hamilton/The Discourse
Urban Nation

The throes of Vancouver’s opioid crisis hit home for me recently after I witnessed a woman die from an overdose on the city’s east side.

I was riding my bike to work up a rain-slicked side street after leaving my gym one morning two weeks ago. When I neared an industrial area by the railroad tracks a few blocks from work, I saw the flashing lights of multiple emergency vehicles in front of a small grassy patch with tents on it.

Paramedics had just stood up and beneath them was a man kneeling on the ground. He was crouched over and hugging the prone body of a woman. He was screaming “No!” “Wake up!” and “Don’t leave” in a voice that sounded like it came from the earth’s core, in an angry-mournful tone that I’ve only heard emanate during times of death.

A Vancouver Police Department officer gently placed his hand on the man’s back and helped him up. As he stood, I saw the woman more clearly before a blanket was pulled over her face. I recognized her as one of the homeless people who frequent the block where I work.

In that moment Vancouver’s opioid crisis became more real to me, in a way that reading statistics just can’t capture.

The most recent overdose stats were reported in an April 14 city hall press release: more than 1,000 people have died of overdoses in Vancouver since 2016, and the number of drug-related deaths has increased here every year since 2014. Across the province, an average of 2.9 people a day are still dying from overdoses, the city noted.

I’ve known people who died from fentanyl overdoses, but this was different: I witnessed this one, and the immediate pain of a loved one left behind.

Throughout that week, I kept seeing emergency lights flashing and hearing squawking emergency radios. Mostly though, especially late at night, I could hear that guy crying.

I travelled to my hometown of Port Alberni where I had promised to help some teens in my First Nation with a project. But I also visited my nation’s cultural-use area in a remote part of town.

I couldn’t unsee or unhear what I’d witnessed. It was burned into my mind. But there, in the silence of the pristine wilderness by the lake where my ancestors once lived, the emergency lights I’d been seeing dimmed, the squawking radios faded and the man’s crying subsided.

Back in Vancouver, I cycled through the industrial area where the woman died, both to get a sense of closure and to pay my respects. The tents are gone now, the grassy patch is bare and you’d never know anyone lived, let alone died, there.

What inspires Candace Campo is the dedication to community-building that she sees in the people all around her.

“What I love about our community — and what I continually aspire for and want to implement more in my life — is the actual practice of community,” she says.

Candace, who is Shíshálh and Squamish, sees the people around her dedicate time and effort to preserving the culture and closeness in her community. For her, that means families prioritizing time to attend cultural events and support one another.

“I really believe being a member of an Indigenous community, or Indigenous family, is to be very conscious of your community members around you, and to be supportive,” she says.

She says she sometimes looks at herself and wonders: “Am I doing enough to support the average family? Am I so immersed in my own life and my own business that I’m missing the goal to support community as a whole, to support parents as a whole?” she asks.

Candace and her husband own a small tour company called Talaysay Tours, which runs walking, hiking and boating tours out of Stanley Park, Squamish and the Sunshine Coast, focused on sharing the areas’ Indigenous history and culture. Though she sometimes struggles to balance community-building with the demands of owning and running a small business, she remains dedicated to playing her role in supporting the community she’s proud to be a part of.

“I think, to be honest, my fundamental role and responsibility as a woman, as a mother, it is my responsibility to look at and support the family,” she says.

“I think it’s too easy for us in today’s society to just carry on and focus on your own life and your own well-being, but I think if we keep moving in that direction, then we’re in trouble,” she adds.