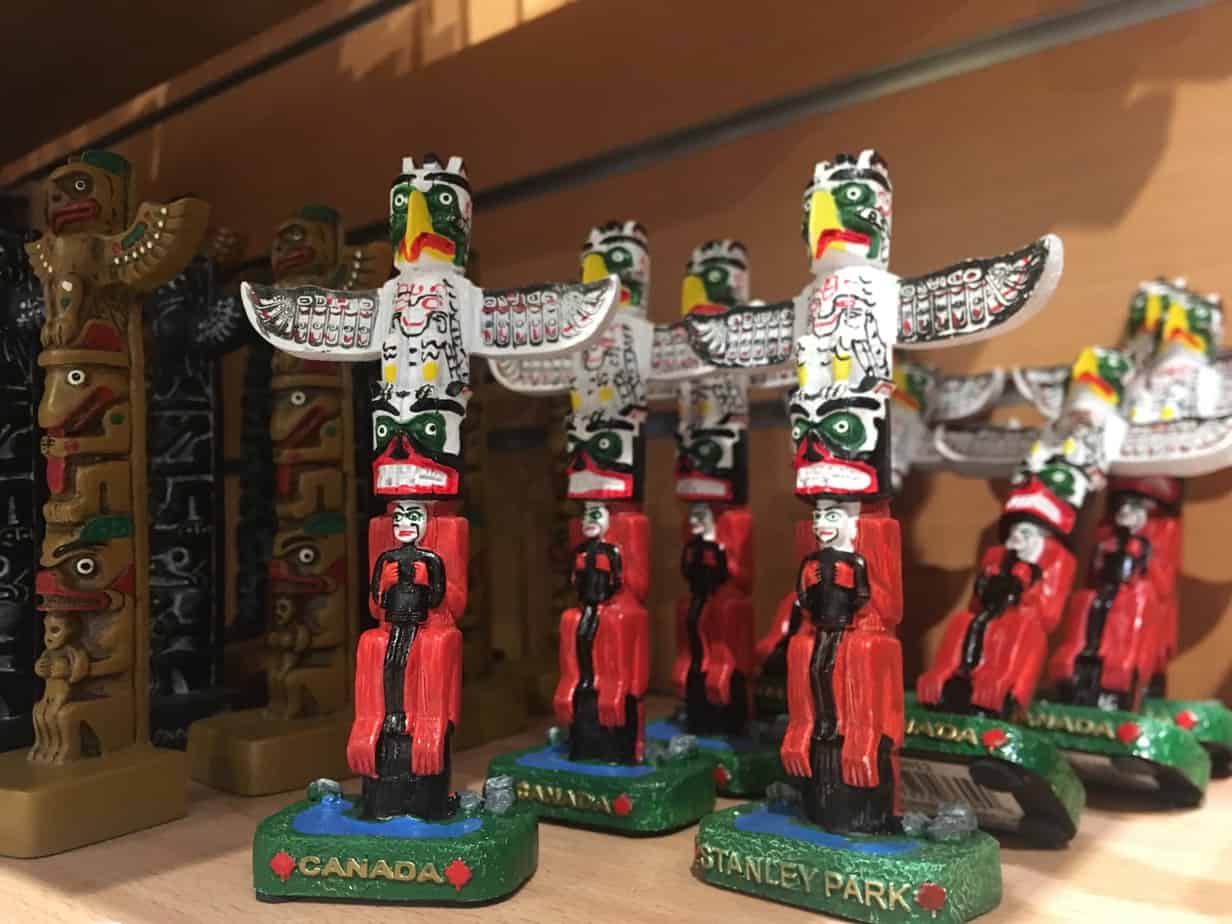 The designer of these totem poles told us that he designed them himself to honour the beauty of Canada, without collaborating with Indigenous artists. Francesca Fionda/The Discourse
Urban Nation

From their randomly splashed designs to their strange choice of materials, fake poles miss every opportunity to honour our culture. And they’re just the tip of the fake art iceberg.
Wawmeesh Hamilton
Support this work. Tell a friend.

When I saw the findings from our recent fake art investigation, which found that three quarters of the tourist shops we checked in Vancouver appear to sell some fake Indigenous art, I wasn’t surprised.

I’ve walked past tourist shops in Vancouver and seen it with my own eyes. Seeing a shelf full of replica totem poles with designs randomly splashed on them makes me wince. If that’s not a dead giveaway, then the mahogany they’re carved on and a sticker that says Made in Indonesia certainly are.

It’s not just the poles that are fake, though. It’s paintings, carvings, T-shirts, knick-knacks that are pawned off as Indigenous but are garbage. Tourists are buying garbage that looks worse than what authentic Indigenous artists discard.

And it’s not just one shop; it’s most of them and not just in Vancouver. I’ve seen the same fake Indigenous art cloned and sold in large cities and small towns. Tourists, many of them foreign, pay money for this stuff believing it’s Indigenous, and therein lies why this bothers me: nothing about fake art is Indigenous. And when foreigners buy this stuff, they lose out on the chance to learn something about us — and Indigenous artists and businesses lose out too. In fact, judging from the labels on these products, I wouldn’t be surprised if foreigners think we’re from China or Indonesia.

The worst piece of fake Indigenous art I saw was a wooden paddle made overseas with a design that, well, I still can’t figure out what it was. The seven others hanging behind it looked like carbon copies. The store clerk didn’t know anything about them, either. It was offensive to see this. But what really bothered the hell out of me was seeing an Indigenous man carving a real paddle in the doorway next door on the street out in the cold. It bothered me because people walked right past him into the shop to buy poor imitations of what he was making for real.

I wondered what artists thought about this, and soon I’d find out. For my stories in our fake art investigative series, I spoke to several Indigenous artists and asked them how fake Indigenous art makes them feel. All were resigned to the fact that the issue is so widespread now. At the same time, though, they were all offended by it. Fake art doesn’t just offend the craft of Indigenous art; it offends the essence of it: the customs, traditions, protocols — even the right to use it.

My colleagues and I spent months documenting fake Indigenous art, and this week we’re releasing the results in a six-story series. We look at the prevalence of the issue, show how we investigated it and examine how laws around this are a grey area. You’ll hear reactions from artists who create authentic Indigenous art, as well as see how this issue impacts Indigenous businesses that produce authentic art. Finally, we show you how an iconic Vancouver totem has been repeatedly replicated for profit without acknowledging the man who carved it, or so much as a thank you to his descendants.

Fake Indigenous art is a multimillion dollar business, I’m sure. The business may be doing well. But if you wonder how Indigenous people are profiting, just ask the Indigenous guy who was carving that paddle out on the street as people walked past him into the store next door to buy fake Indigenous art.

Paisley Nahanee wants to see more acknowledgement of Indigenous people expressing their creativity in ways that might not be considered traditional.

The 22-year-old is the founder of Dame Vinyl, a nonprofit that hosts DJ nights across town and trains self-identifying women and non-binary folks to DJ vinyl in Vancouver.

She says Indigenous people who are producing art that isn’t typically considered Indigenous in nature can be overlooked.

“Some of my favourite Indigenous artists make comics, for example,” she notes.

Paisley says her Indigeneity is ingrained in everything she does.

“People are always like, ‘You did it because you want to take down the patriarchy,’ and there’s part of that, for sure. But Squamish people, there’s always the teaching of you share everything,” says Paisley, whose family is part Squamish and part Hawaiian. “You make a lot of food, you share with your friends. You share songs. You share your skills.”

Even Dame, which might seem like it’s “totally outside” of Indigenous culture, is “based in Squamish teachings,” she says.

She remembers one of her teachers once told her: “Hey, Paisley, everything you do is going to be Native art because, like, you did it. It doesn’t matter if you are painting like an eagle feather or you’re like doing Tumblr self-collage; it’s Native art because you’re making that.”

As mentioned, from May 21 to June 15, we’re asking people who believe in what we do to pay for The Discourse. So far, more than 140 people have become monthly supporters! If you appreciate community-powered journalism, please help us by sharing this page with your friends, and telling them why you support Urban Nation Discourse.