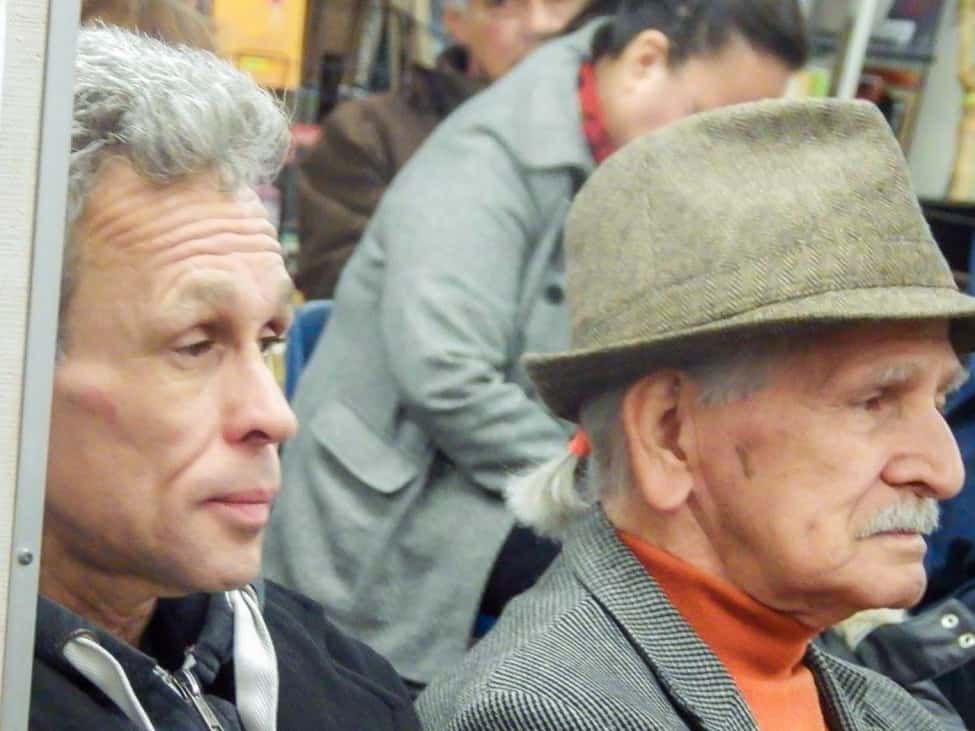 Bill Lightbown, right, seen here with his son Shane at a Congress of Aboriginal Peoples event in Vancouver in 2015, spent much of his life fighting for urban Indigenous rights. Courtesy of Scott Clark

In his youth, Bill Lightbown spent six months in prison for vagrancy but his real crime, he said, was being “an Indian.”

My enduring memory of Vancouver Indigenous rights advocate Bill Lightbown comes from a constitutional forum hosted by the United Native Nations in 1991.

A former UNN president himself, Bill was invited to help plan the forum for urban Indigenous people and various social groups and unions at the Maritime Labour Centre. And he accepted — but with no strings. The day of the forum, he told the crowd he couldn’t support the exercise and walked off the stage alone. In my mind, that was Bill.

If he believed something to his bones, then as lithe and elderly as he may have been, you couldn’t budge him — and he’d speak his mind. Right up to the end.

Bill Lightbown died on March 1 from complications related to a broken hip. He was 91.

Bill was born in Golden, B.C. in 1927. His mother Merceline Morigeau was Indigenous and from the Kootenai Nation. But because his father David Lightbown was non-Indigenous, Merceline lost her Indian status, rendering Bill a non-status Indian. In the early 1990s, I recall Bill describing this as an indignity and an injustice — and they weren’t the last he suffered.

After moving to Vancouver, he spent six months in prison as a young man for vagrancy, despite having a place to live. In a later interview, he said his crime wasn’t vagrancy, it was being an Indian.

I always got the impression that the injustices he suffered made him coil tight like a spring. In 1969 the coil sprung when he met Indigenous rights activist Butch Smitheram, who was organizing Indigenous people living off reserve, as well as non-status Indians. Later that year, the BC Association of Non-Status Indians was born, and Bill became its president just a few years later.

In 1976, Bill was among the Indigenous leaders who tried to merge BCANSI with the equally influential Union of BC Indian Chiefs, but the attempt failed and BCANSI folded. Subsequently, the United Native Nations was born and took up serving off-reserve and non-status Indigenous people until its demise in 2012.

In the early 1980s, Bill served the UNN first as a councillor then as president. At the 1983 First Ministers’ Conference, he was part of the constitutional negotiations between Indigenous leaders and government ministers. In 1985, Bill and other UNN members lobbied the federal government to reinstate Indian status to Indigenous women who lost it through marriage.

Bill lost the UNN presidency in the late 1980s, but stayed politically active afterward. He and his wife Lavina were at the 1990 Oka Crisis in Kahnawake, Quebec, and later participated in the Royal Commission on Aboriginal Peoples. He was also at the Gustafsen Lake standoff between Indigenous people and RCMP in 1995. And Bill was a board member of the Aboriginal Healing Foundation in 2000, even making some recommendations that became part of the Indian Residential Schools Settlement Agreement of 2006, according to this Facebook tribute in his memory.

I’d see Bill from time to time in the last decade. He struck me as an Indigenous elder statesman now. He had a distinguished way about him, and was part of that older generation of Indigenous men who always wore sports coats. Still sharp of mind, I also knew him to dispense wisdom to a new generation of Indigenous leaders including Scott Clark, the executive director of Aboriginal Life in Vancouver Enhancement Society (ALIVE), where Bill served as an elder.

I’d see Bill on Commercial Drive or on the city bus, and he’d be going to or coming from ALIVE meetings, always with a ready hello and a chat. In spite of his many accomplishments, I’ll miss this about him more than anything else.

Bill is predeceased by his wife Lavina and his daughter Ethel. He is survived by his children Shane, Henry, Greg, Bill, Alice and Sherry, as well as grandchildren and great-grandchildren.

Danni moved to Vancouver in 2013 from the Clearwater River Dene Nation in northern Saskatchewan, and is now studying biology at Langara College, where she was elected to student council in October 2018 to sit as the first Aboriginal Representative in four years.

The 18-year-old loves that she can go to the Gathering Space, a multi-use area for Indigenous students at Langara, to pick up new words from Elder in Residence and retired teacher, Mary Jane Joe, who is from the Ntle’kepmx Nation in central B.C.

Learning Indigenous languages is especially important after residential schools tried to eliminate them, Danni says. “I find it very important to preserve whatever we have and try to teach younger generations so it can keep thriving [and] stay alive.”

Her enthusiasm for her new life in Vancouver is a sharp contrast to the pain she carries from home.

Back home, her community in Saskatchewan is still reeling from a 2016 school shooting that “tore the community apart,” she says.

“We’re kinda broken at the moment,” she says. “And they’re still grieving over it and there’s work to be done, but there’s still a lot of damage that needs to be repaired.”

“I can’t say anything about my community where I grew up,” she adds. “It’s just I — it’s just horrible, I just don’t have any good memories.”

Still, she misses some of the culture she used to share back home. “I just remember being so in touch with my Dene culture activities, that’s what I miss most about my community.”

But, she says, Vancouver gives her many of the same opportunities now, if not more.

“They’re doing pow wows, they’re doing drumming, singing, culture activities. And I can just pick and choose where I want to be,” she says, referring to the variety of events put on by the Indigenous community in Vancouver.

She also appreciates the easier access to health care and other services she says she’s found in the urban centre.

“It was a slow process and you wait hours just to get antibiotics for like a sore throat,” she says of her previous experience with the health-care system at home.

Whereas in Vancouver, she says, “going to a clinic will take like an hour, instead of waiting like six hours to just like see someone. So there’s that benefit. There’s more emergency things you can access.”