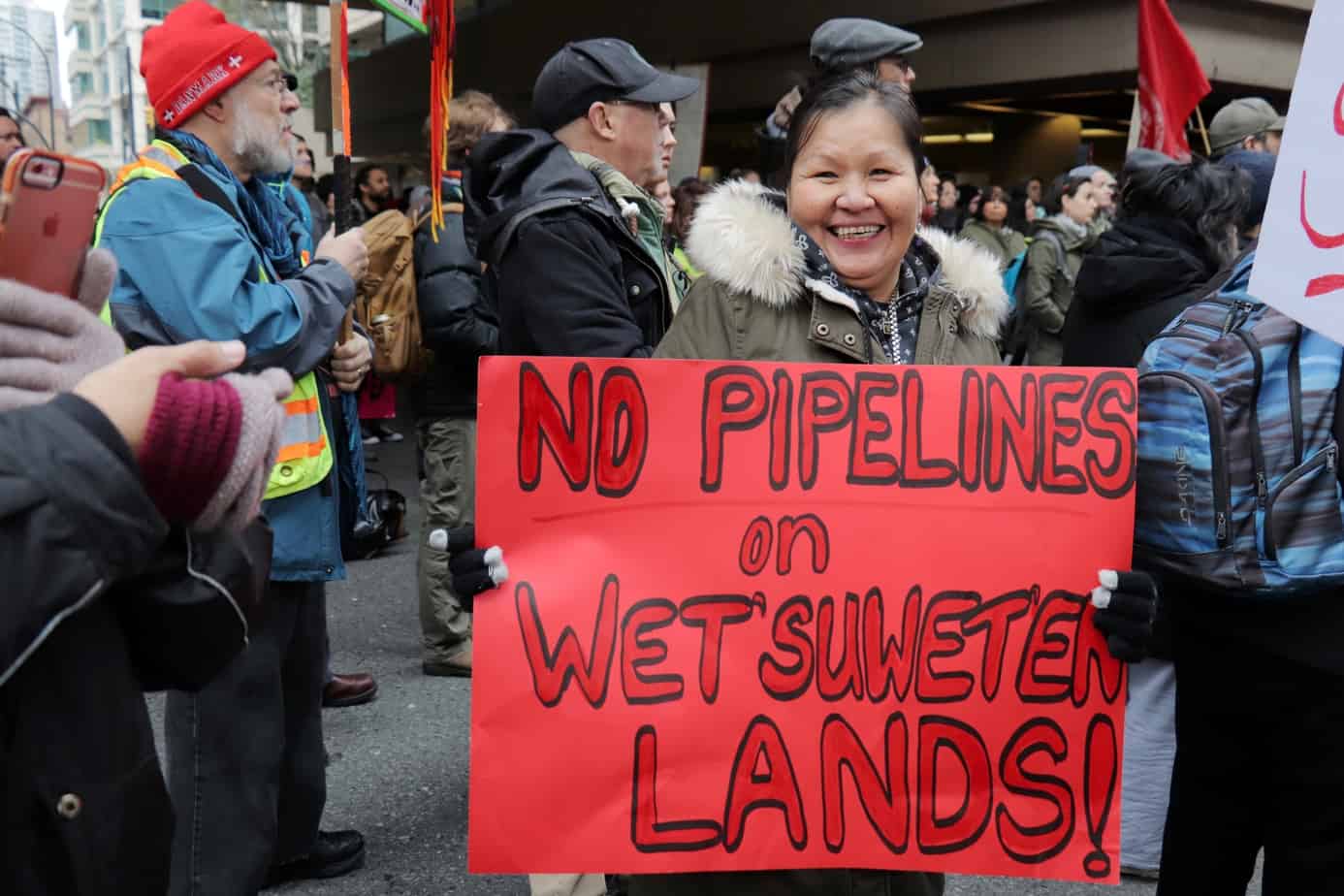 “They love our resources, they love our land, but they don’t love us,” says Lavynia Holland, who attended the Jan. 8, 2019 rally in Vancouver. Brielle Morgan/The Discourse
Urban Nation

Standing with the Wet’suwet’en

Hundreds of Indigenous people and allies rallied in Vancouver to support land defenders and call on government to honour Indigenous rights.
Brielle Morgan January 9, 2019
Support this work. Tell a friend.

One day after armed RCMP officers scaled the Gidimt’en camp checkpoint and arrested 14 people who were peacefully protesting construction of the Coastal GasLink pipeline and protecting their land, hundreds of Indigenous people and their allies marched in Vancouver, as well as across Canada and around the world, to show their solidarity with the Wet’suwet’en nation.

RCMP tore down the checkpoint to enforce a court-ordered injunction allowing TransCanada to access the forest service road near Houston in northern B.C., where it wants to build a pipeline to transport natural gas through Wet’suwet’en territory to an LNG plant scheduled for construction near Kitimat.

Though the region’s elected band councils, which have jurisdiction over Wet’suwet’en reserve lands according to the Indian Act, signed project agreements with Coastal GasLink, the Wet’suwet’en hereditary chiefs say they weren’t consulted and never consented to a pipeline through their traditional, unceded territory.

In Vancouver, I talked to many Indigenous people, as well as non-Indigenous allies, who rallied on Jan. 8 to stand with the Wet’suwet’en nation and against the RCMP’s incursion into Indigenous land.

Audrey Siegl, a Musqueam activist, came to speak her truth.

“We see that we are represented as the heathens, as the savages, the violent ones,” she told the growing crowd outside the B.C. Supreme Court in downtown Vancouver. “If we were the violent, aggressive ones, we wouldn’t be speaking English, would we?”

“We still come with peace… but I can assure you, over 10,000 years of existence, we know how to battle,” she said. “Our warrior societies need to rise, not for the purpose of violence, but for the purposes of protecting and defending and leading the way.”

“Trudeau, he’s just another in a long line of white men who thought that they could come here and take over. But after over 500 years of trying to exterminate us, not only are we still here, we’re the fastest and youngest growing population for generations,” she said, to much applause and cheers.

Lavynia Holland, a Vancouverite who’s originally from Smithers, B.C., told me she’s got a message for our provincial and federal leadership: “They love our resources, they love our land, but they don’t love us. And they’re still taking, stealing and raping our land.”

Lavynia says her father worked on the groundbreaking Delgamuukw case, which confirmed that Aboriginal title, ownership of land had never been extinguished in British Columbia. The Wet’suwet’en are his ancestral people. “My father has since passed away. I know he would proud of me for being here, trying to stick up for his people.”

Jolene Andrew belongs to Laksilyu, one of the five Wet’suwet’en clans. She’s from the House of Many Eyes and like Lavynia, she has personal ties to Wet’suwet’en traditional territory.

“One thing that really makes me hurt and frustrated is that in the Delgamuukw court case, where my grandpa stood and where so many of our elders stood, they stood there to listen and follow laws because they understood the importance of laws,” she said. “Now that law that was made and acknowledged by the Supreme Court isn’t being acknowledged.”

Jolene said it was an honour to hear so many Squamish leaders and land defenders speak at the Vancouver rally, in solidarity with her people.

“I get increasingly frustrated that the community’s being divided,” she said. “Way up north, where we have very small communities, families are being pressured into these mining jobs and mining camps and now all these pipeline projects because they need money, because they have children to feed and elders to feed. We need infrastructure. We need jobs that aren’t aligned with these resource companies.”

“We need to build our own resilience and it starts with the land.”

When Mike Bird heard that the RCMP had enforced the injunction, the software engineer decided to take some time off work, so he could take part in the rally.

“Trying to establish construction through land that doesn’t belong to the government is an illegal act and that’s — that’s something that I am not okay with the government that represents me doing.”

He hopes the federal and provincial governments will reconsider after they “see from the demonstrations that the path they are pursuing is not the ethical one.”

Rick Waines attended the rally because he believes “collective action can make a big difference.”

Like many at the rally, he’s disappointed in this Trudeau government. “Getting that resource to market is more important than their beliefs around Indigenous rights and reconciliation.”

As a self-identified middle-aged, white, cisgender settler, Rick told me he feels it’s his responsibility as a Canadian citizen to step up and be counted. “I grew up with HIV in the mid-’80s, and all the support I received made a difference.”

At the rally, Rick bumped into an old friend, Tracy Dixon. She’s spent a lot of time in Brazil, and she’s alarmed about the infringements on Indigenous rights happening around the world.

“It’s really easy to turn a blind eye because it feels like there’s so many issues and land rights issues right now,” she said. “It’s a really good thing to go and be present at an action and listen and learn, instead of going into hopelessness or fear or just to be in denial.”

Chances are you’ve been welcomed to parts of the Lower Mainland through the work of Squamish carver Darren Yelton.

From his totem pole beneath the Burrard Street Bridge along the False Creek seawall in Kitsilano to his contributions to the pavilion on the Trans Canada Trail in Waterfront Park in North Vancouver, Darren’s work honours and marks his people’s connection to this land.

“Whether it’s in North Van, West Van, Squamish, Whistler or Vancouver it just shows that that territory once belonged to our people and we are standing these markers up,” says Darren, whose Coast Salish ancestral name is K’na’kweltn~.

What K’na’kweltn~ loves about the urban Indigenous community is how he and other members share their culture with their non-Indigenous neighbours through community projects.

“We try and participate as much as possible with the outside community and teach our culture to them to show them that what’s in their backyard — today, living in North Vancouver, is First Nations artwork.”

Last year, he helped guide the creation of a welcome pole that now stands at Ridgeway Elementary School in North Vancouver. The entire school community took part, including more than 500 students and 60 staff and parents, who helped carve and paint the pole.

“It shows you our culture never faded. It was never ever lost,” he says. “Our people kept it alive, and we are going to keep it alive today, and keep it alive hundreds more years down the road.”

Would you like to share what you love about being part of the urban Indigenous community? Send your thoughts, contact info and a photo of yourself to brielle@thediscourse.ca. We’ll be in touch if we’d like to feature you in an upcoming newsletter.