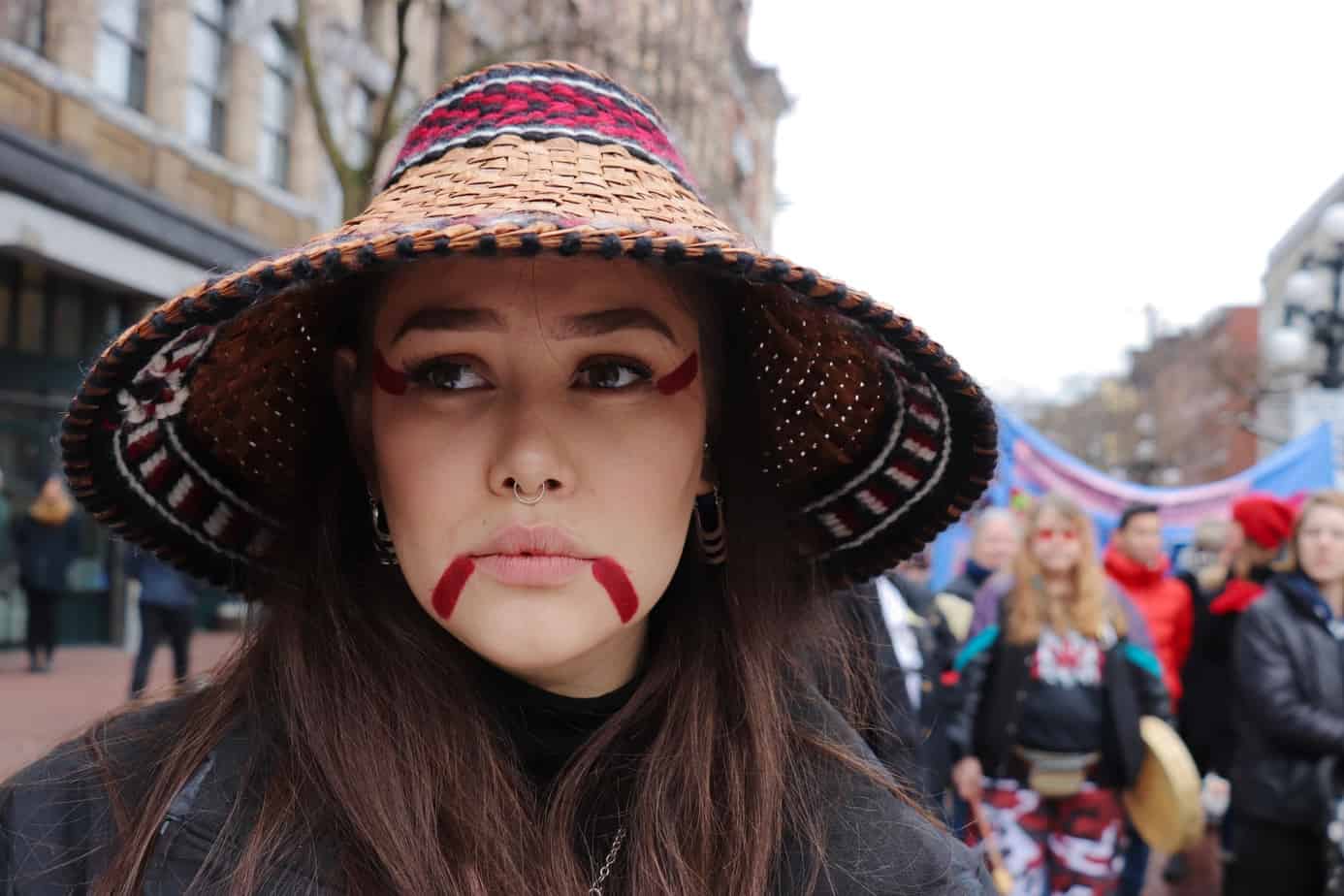 ‘Our women are being hunted and killed’

Indigenous women have led the Women's Memorial March in Vancouver for 28 years to grieve and call for justice.
Brielle Morgan
Support this work. Tell a friend.

Last week, I walked behind elders, healers, drummers, activists and thousands more who came to collectively grieve the loss of their mothers, daughters, sisters and friends on Feb. 14, 2019, at the annual Women’s Memorial March.

Indigenous women have led this march through Vancouver’s Downtown Eastside since 1992. They gather not only to grieve and remember, but also to unite in their call for justice.

These are women who “face physical, mental, emotional, and spiritual violence on a daily basis,” the march’s organizers say on their website. In the face of this ongoing violence and colonial racism, their strength, resilience and leadership is remarkable.

“Our women are being hunted and killed,” said organizer Myrna Cranmer, during the press conference that preceded the march. She held a long list: names of women the organizers have recorded as missing or murdered over the past year in Metro Vancouver. “I was going through the list of names last night and I found eight more names that are not on our list that should be.”

Organizers demanded accountability and action not just from government or police, but from everyone. “Is this just a one-moment-thing where I’m going to just pour my guts out about what’s going on?” Carol Martin said to the handful of journalists at the press conference. “Is this the only time that people are going to listen?”

“My entire family is homeless and on the streets and I’m here for them because I know they’re not safe and I know I’m not safe,” said marcher Ray-Chelle Boulier, 31, who is a member of Sts’ailes First Nation.

Ray-Chelle marched to remember her mother, Glenda Herrling, who died of exposure. “She was a matriarch of the people on the streets, not just other Indigenous people, but everyone,” she said. “I’m here for my mom and all of my family that has been murdered.”

“The police don’t care about us and that’s made very obvious when they don’t investigate any of those murders, not just women, but men, too,” she said. “I feel fear every time I see a police officer.”

“I am Sto’lo and Nuu-chah-nulth,” Sii-am told me, in Hul’q’umi’num. Then in English they continued, “I am at the march today because there is a number of Indigenous women and femmes and two-spirit people that are missing and the police aren’t doing anything about it, and I’m scared.”

Sii-am, who uses the gender-neutral pronoun “they,”  is 24 years old and has spent much of their life in Vancouver. “We have a lot of relatives that live here on the Downtown Eastside, and every year there’s less and less.”

Viviane Rose Sandy identifies as a Shushwap woman and she’s been on the front lines of the march since the year it began.

“My colours are red and black and they represent mother earth and the warrior,” she said. “I fight for justice, for peace, for love… the red, white, yellow and black people are of one family. It’s time for us to come back together.”

“Everything is out of balance, and the women, we get the brunt of it,” Viviane told me. “This is a healing ceremony for all. We’re marching, but we’re in circle — to us this is a sacred circle.”

Filmmaker Ruby Dennis said she marched to remember women who’ve gone missing along the Highway of Tears. Ruby comes from the Tl’azt’en First Nation up north, and she said her roots in the Downtown Eastside run deep.

She spent the day volunteering, ensuring elders were supported as they performed ceremonies along the walk to honour women who’ve gone missing or been murdered.

At the end of the march, people gathered in a circle at Main and Hastings, where march organizers spoke and healers smudged.

Elder Rita Blind has brought her energy and leadership to the memorial march for many years.

“Look up always and don’t be afraid,” she said, as she led the crowd in a prayer. “Our ancestors are gathering with us… they’re very, very happy with what you people are doing, and I thank the people of the sacred lands that are surrounding the city.”

“I ask you my dear sisters and brothers — love each other,” Rita continued. “They tried to destroy us for the last 500 years and it has to stop. And we are the ones that are going to stop it.”

If you like this newsletter, help us build this community by inviting your friends to subscribe. We value your feedback.