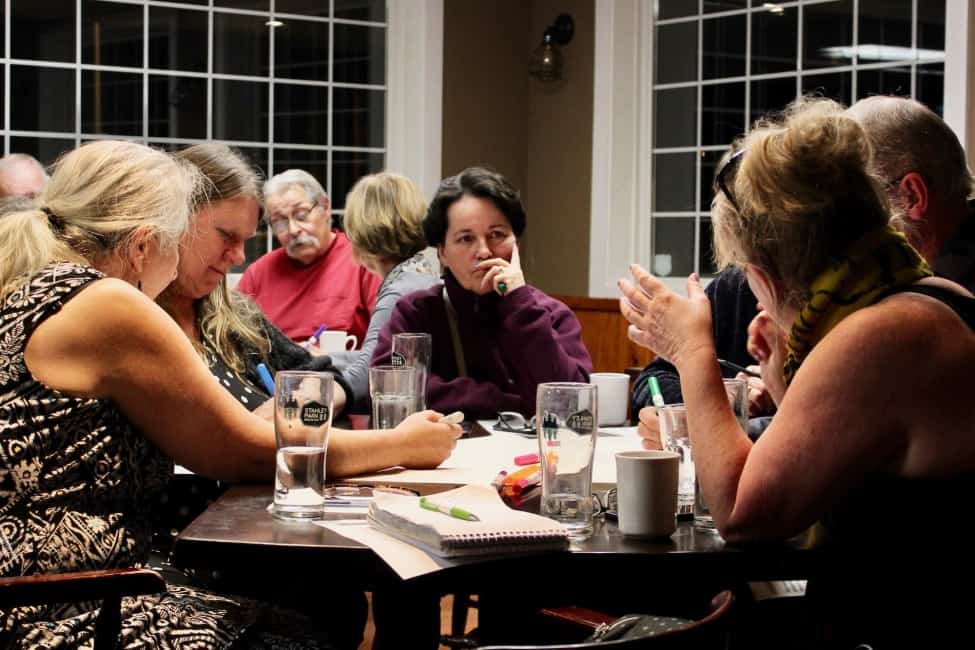 This is from our Cowichan Valley weekly newsletter. You can sign up here.

Last week, about 40 people crowded into a Riverside Inn meeting room to have a say on affordable housing in Lake Cowichan. The Cowichan Housing Association and Social Planning Cowichan hosted the event to get input towards an Affordable Housing Action Plan for the Cowichan Valley. The action plan is a big deal – it prioritizes how money will be spent to address housing supply across the region.

Based on your vote in the referendum on housing last fall, the Cowichan Valley Regional District decided to provide $765,000 annually toward affordable housing initiatives. That money is intended to help organizations in our community access some of the nearly $7 billion in investments promised for affordable housing in British Columbia over the coming decade.

At the meeting, some community members seemed eager to get to the point, interrupting a presentation from Cowichan Housing Association’s Terri Mattin on housing trends across the valley. One man asked, somewhat aggressively, what any of the information has to do with him. Another chimed in to suggest that he, a homeowner, is being treated as a second-class citizen, being asked to pony up through property taxes to the benefit of others.

The mood shifted after Bob Day of the recently formed Cowichan Lake Elder Care Society got up to speak. He explained that he and a few others had banded together in service of an idea — that people in Lake Cowichan can stay in the community until the end of their lives, with a facility that supports different levels of care needs. Currently, Lake Cowichan has some affordable apartments for seniors but no supported housing or long-term care.

His society seems to be making traction. Day announced that it has reached a deal with the Town of Lake Cowichan to secure a piece of land for the facility, located on South Shore Road next to the library. This could help the society secure money from the province for construction.

The response in the room was immediate: this was no longer about paying higher taxes to help others elsewhere. This was about a good thing maybe happening for the people of Lake Cowichan, driven by the people of Lake Cowichan. Day explained that the resources of the Cowichan Housing Association will be critical to moving the project ahead, since that association has expertise and connections that the society does not.

“What’s in it for me?” can be a useful question but it doesn’t always have a satisfying answer. For the community of Lake Cowichan, the future of elder care remains uncertain. Will an elder care facility ultimately be built? Who will get access to that, and who will be left out?  These are important questions, but it’s hard to argue that working together for the collective benefit isn’t worthwhile in any case. Living in a community often requires working together, with the understanding that individual benefits will likely be unequal and uncertain. As the shift in tone at the meeting seemed to suggest: Working together can be a benefit in and of itself.

Our community conversation on how journalists can improve coverage of the child welfare system, part of Cowichan’s International Women’s Day festival, is just over a week away!

Join us in bringing together journalists and people with lived experience to talk about how media coverage can better reflect the child welfare community.

Child apprehensions in Cowichan have received significant media attention in local and national outlets recently, but I’ve heard from some of you that these stories don’t reflect the complexity of the issues and the good work of many trying to address them. This is an opportunity to change that.

Plus, you’ll get a chance to hear from The Discourse’s dedicated child welfare reporter, Brielle Morgan, on her latest project, Spotlight: Child Welfare – a one-of-a-kind journalism collaborative driven by and for the child welfare community. Make sure you RSVP below!