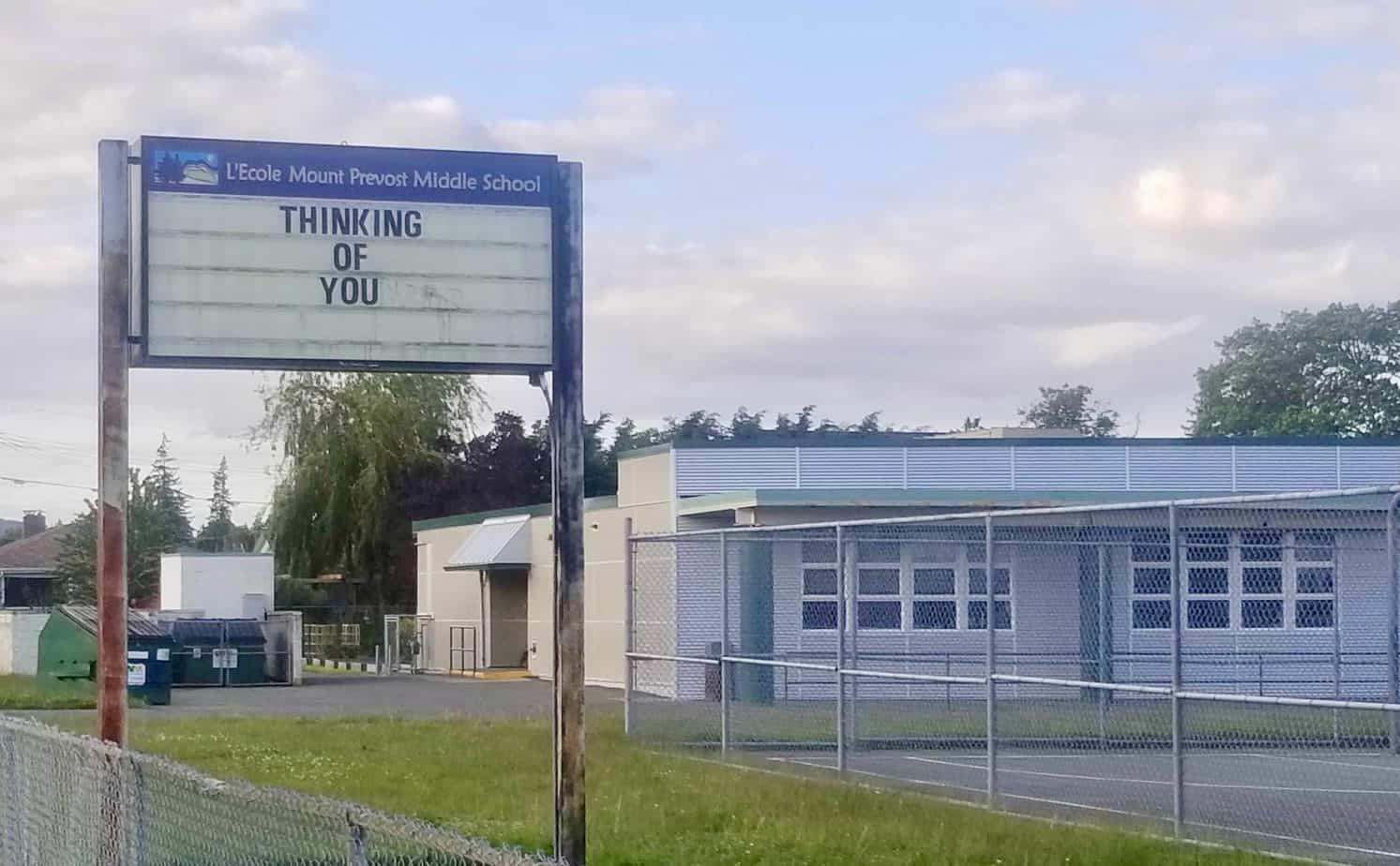 To go or not to go? In a pandemic, classroom attendance is a big decision.
David Minkow
Support this work. Tell a friend.

With a week left until Cowichan Valley schools welcome back students for voluntary part-time classroom instruction, many families are still struggling to decide if the benefits outweigh the costs.

“I so wanted an option for ‘maybe,’” says Heather Kilback, regarding a survey that Cowichan Valley School District 79 sent to parents last week, asking their intentions. Heather is the mother of Keira, in Grade 6 at École Mount Prevost, and Emily, in Grade 8 at Quamichan School. Heather responded that Keira would return to school and Emily would not. But the family continues to deliberate.

Cowichan Valley schools closed for spring break on March 9, and have been largely closed since in the effort to limit the spread of COVID-19. Now, as British Columbia enters Phase 2 of its Restart Plan, local schools are quickly making a plan to invite students back on June 1. In general, classroom instruction will be offered half-time for students in kindergarten through Grade 5, and one day per week for grades six through 12.

The survey indicated 51 per cent of students would return, and 49 per cent would not, according to an email from Mike Russell, the school district’s communications director. The responses accounted for about half the student population. Russell says that the district expects the numbers could shift as families continue to grapple with the decision.

A chance to see friends

“Some of my friends are going back and that’s really the only reason I want to go back,” says Keira Kilback. She says she has been able to see a couple  of her friends on bike rides, where they stayed physically apart, but is eager to see more of them.

Keira’s parents tentatively agree that she can go try it out, but she won’t be taking the bus. “I don’t mind going on the bus usually, but I don’t trust everybody to stay the distances [apart from each other] on my bus,” Keira says.

But Keira’s sister Emily is likely to stay home. Their mother, Heather, says part of the reason is that Emily hasn’t enjoyed her school year as much as Keira, and has also been able to be around more people through her equestrian activities. And Heather says she’s more worried about Emily’s teenaged classmates ignoring the physical distancing guidelines.

Ultimately, both children have a strong say in their decision to return or not, Heather says.

Will it be safe?

The risks of spreading the coronavirus are top of mind in the Kilback household. Heather’s mother-in-law is recovering from surgery and the family wants to be in good health when they eventually are able to visit her, she says.

“We try to be as strict with the rules as we can while still living a reasonable life,” Heather says. They are cleaning everything that comes into the house, and maintaining physical distance when away from home.

There is still much uncertainty around the risks of children becoming very sick from COVID-19, or spreading it to others. While young people seem to generally have milder symptoms, that could increase transmission by people who are infected but don’t feel sick. And, while it’s rare, around the world children and teenagers are being hospitalized and dying from severe complications that are likely linked to the coronavirus.

Vancouver Island hasn’t seen a new confirmed case of COVID-19 in more than two weeks. But there will almost certainly be future outbreaks. B.C. provincial health officer Dr. Bonnie Henry says that the partial, voluntary reopening of classrooms will help inform a careful and safe return to schools in the fall.

Will they learn anything?

The Kilback household has settled into the routine of physical isolation and home-based learning. Heather says that she and her husband Sean are not letting their kids sleep in; they have to be out of bed by 8:30 a.m. wearing clothes that weren’t worn to bed.

And online schooling has been working quite well for her and her children, who are getting more done in a shorter amount of time, Heather says.

“Academically, I don’t think they’re going to miss a great deal if they don’t go to school,” she says. In a normal year, the kids are pretty checked out by June, and this year they’re being offered just three or four days of in-class schooling over the month.

Keira, too, says she’s waiting to see if there’s a reason beyond seeing friends to attend. “I mostly want to go for the first day and see what they’re doing. … If I feel like we’re actually doing something, I’ll go for the rest of it.”

If you can’t hug your friends, what’s the point?

Amber Marsh thought both of her children would for sure go back, up until she got more information in an email from a teacher about what the return would look like for her daughter Amelia, in Grade 6 at École Mount Prevost.

“It kind of sounds awful,” Marsh says. “Everything is just so sterile. They can’t use their lockers. They can’t touch anything in the classroom. If they get within six feet of their friends, their privileges are revoked. If it was my choice about me going back I would have read that and gone, ‘No, I’ll try to meet my friends at the park.’”

Both of her children have been suffering from the lack of social contact, she says. But Amelia is having second thoughts about going to school just to stay apart from friends. “She wants to be able to hug them,” Amber says.

Amber’s son Alex, in Grade 8 at Quamichan School, says he’d still like to go if at least one of his close friends will be in class with him. For him, the appeal is “just to get out of the house and have something to do.”

What if parents and kids don’t agree?

Franya Jedwab, a clinical counsellor in private practice in the Cowichan Valley, says in an email that she is hearing from clients and friends a lot of “indecision and conflicting thoughts” about the reopening of schools. Ideally, parents should let their kids lead the decision, and avoid forcing children to go or stay.

When family members disagree, it can be “a great learning opportunity,” and a chance for the family to come to a decision together by weighing each others’ perspectives, Jedwab says.

Parents who choose to send their children to school should help prepare them for it, emotionally, mentally and physically, she says. “For some kids, it’s going to be really difficult and perhaps even emotional not to be able to be in any physical contact with friends or teachers. It will be important to talk about the skills of flexibility and adaptability and practice this. This can be a bit like flexing a muscle, with practice and time these skills may become easier to manage.”

Can students and parents change their minds?

Families are welcome to change their minds, but should keep their schools in the loop, says Russell, with the school district. That includes letting schools know about bussing needs. Children who are not from the same household will not be allowed to share a bench on the bus, and the district needs to plan accordingly.

The district is committed to offering flexible learning options through the rest of the school year, according to an email from superintendent Robyn Gray sent to parents last week. That includes accommodating students who need extra attention or who are the children of essential workers up to five days per week. And online learning resources will continue to be available, though they might look different in the weeks ahead.