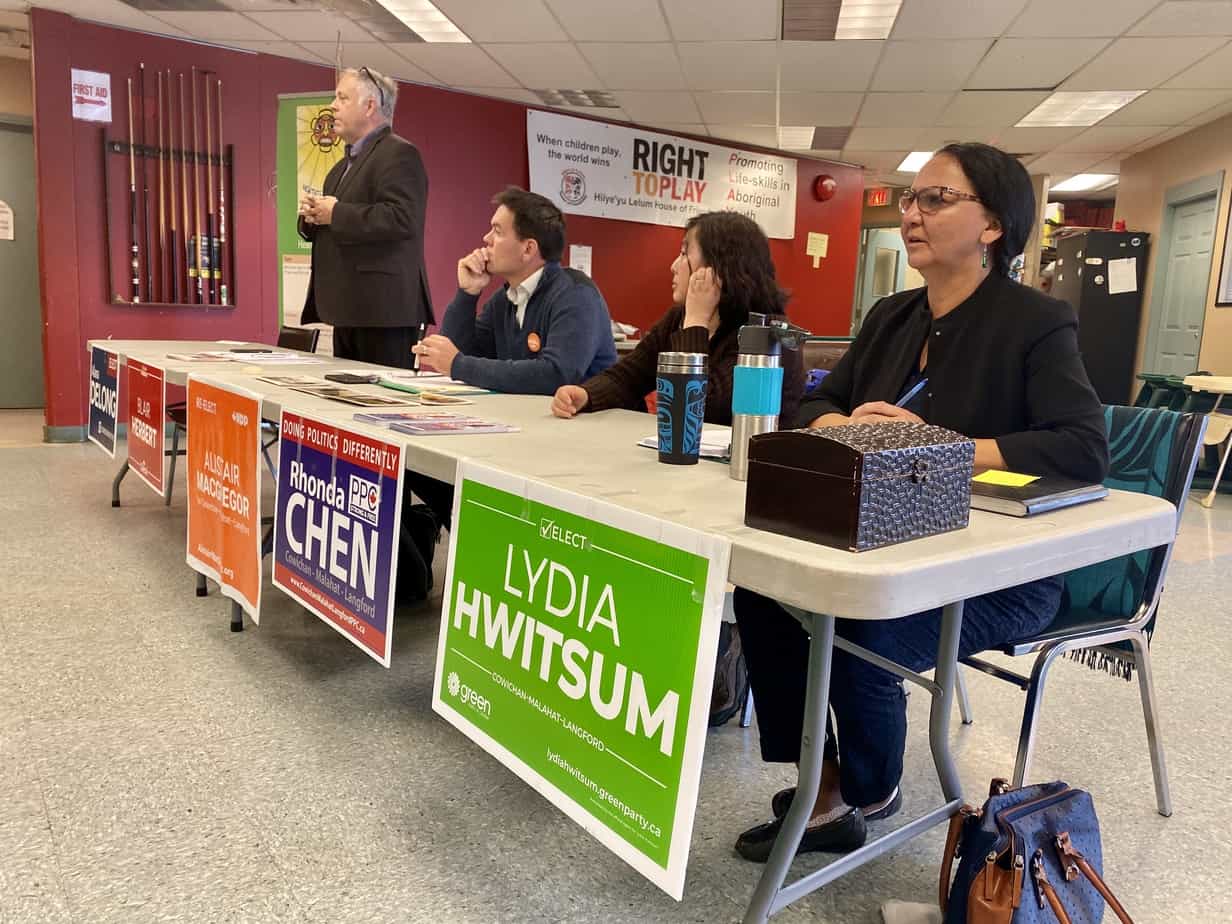 How will candidates advocate for First Nations beyond Cowichan?

On Oct. 17, I attended a forum for Cowichan-Malahat-Langford election candidates at the Healthiest Babies Possible group meeting at Hiiye’yu Lelum (House of Friendship) in Duncan. Healthiest Babies Possible is an outreach program for expecting parents and young families that offers education, counselling, referrals and nutritional support. The program serves Indigenous and non-Indigenous families in the Cowichan Valley.

The group had an opportunity to ask questions of the four Cowichan-Malahat-Langford election candidates that attended. (Conservative Party candidate Alana DeLong was invited but did not attend.) Audience members held the candidates’ feet to the fire on issues including the cost of medication and dental care, reconciliation and climate change. Candidates raised their voices to be heard over the babble of babies.

Usually, in this type of forum, people ask questions, candidates respond, and the discussion moves on. But members of this audience did not stay quiet if they heard something that didn’t sit right with them. For example, one young mom called out Rhonda Chen, with the People’s Party of Canada, for suggesting lower taxes and teaching financial responsibility will help people who can’t afford their dental bills. Another member of the audience called out Liberal candidate Blair Herbert for suggesting that the Liberal climate change plan will meet Canada’s official emissions targets, when analysis suggests it won’t. (That audience member, for the record, is the son of Lydia Hwitsum, the Green Party candidate.)

I’ll share with you here the answers to one question asked by a member of the audience. It was about how the candidates would advocate for First Nations people, not just in Cowichan but beyond. “How will you advocate for the rest of our families?” she asked the Cowichan-Malahat-Langford election candidates. She cited broken promises to the north, for those fighting pipelines, and the need for reconciliation beyond apologies.

Here are the answers:

“That’s a big question. One of the issues with Indigenous people, of course, is they don’t all speak with one voice. When we’re talking about the pipeline, there’s a number of Indigenous communities that think it’s a good idea, that want to be on board with this, and then there’s other Indigenous communities that differ, of course. Same as Duncan doesn’t always share the same ideas with Ladysmith or with Nanaimo. It’s an issue. So it’s not a one voice thing.”

“The attitude of the Liberal government in the last four years has been much better than what it was previously to that. We were able to get the missing and murdered indigenous women and girls inquiry — we were able to get that off the ground in the last four years, and I think it had a big effect across the country. Prior to that, the previous government, it wasn’t even on their radar. In fact, the previous prime minister said, we’re not interested in going down that road. So when we got in, we went down that road, and we did what we were supposed to do.”

“When I listen to Perry Bellegarde, who is the national chief for the country, he said that the Liberal government … in the last four years has done more on the First Nations file than any government in the last 50 years. So, we’ve done reasonably well from his perspective. Is there a lot more work to do? Absolutely. There’s a pile of work to do. And I think that it all goes to back to, basically, what is the attitude of the government that is in power? And this government is all on board with true reconciliation. We just have to get there. And it’s not an easy process, by any stretch, but we are working at getting there.”

[The person who asked the question jumped in to ask if there’s acknowledgement that some of the communities along the pipeline route are among the poorest, and “screaming for cash.”]

“I don’t know what to say about that. There is a number of communities across the pipeline route that are all in favour of this thing, right? They think it’s a good idea. There are some other communities that don’t think it’s such a good idea. But we’ve gone through an awful lot of process, and it’s been passed through by the courts that everything that we did was OK. There is no such thing as a veto for an Aboriginal community to say that, well, since we say no to this, it’s no. The Liberal government has decided that this is in the national interest, right? And for Aboriginal people, or Indigenous people, as well as everybody else, this is the way we are going to proceed. Now are we going to get 100 per cent of people agreed with that? No, we don’t get 100 per cent of people agreeing with anything. Because people have different opinions on things. But at some point, somebody has to make a decision, and we have to start moving ahead. And that’s what we’ve done on that file.”

“Thank you so much for this very important question. I look within the riding of the Cowichan Valley and Langford, and the many interactions I’ve had with Cowichan Elders, and how they have lifted me up and really informed me of the issues that matter in our local community. But your question was, how do we go beyond Cowichan, to First Nations, Inuit and Metis across the country?”

“And to answer your question, I would say that the two biggest influences on my career thus far come from Georgina Jolibois, a proud Dene woman from Northern Saskatchewan, and Romeo Saganash, who hails from the Cree nation in Northern Quebec. Those two people have just been absolute pioneers in the House of Commons. It’s been so amazing to see the work that they’ve brought as part of the New Democratic caucus to Indigenous issues.”

“Romeo Saganash in particular, I have to note, he has spent most of his life working on the United Nations Declaration on the Rights of Indigenous Peoples. And it was his bill that brought that UN declaration almost into law, making federal law in compliance with UNDRIP. And we passed it through the House of Commons. This is a private member’s bill that was passed with the help of the Liberal government, and we sent it off to the Senate, where unfortunately, we had the Conservative senators block it, and it died. But that was a huge leap forward, we were almost there. And I think there’s a strong commitment amongst many parties to see that go forward.”

“It’s such a huge topic, we could spend hours talking about this. But absolutely, I think reconciliation has to go beyond just mere words. You have to start backing it up with actual action. We have to make sure that that phrase, ‘free, prior and informed consent’ is there at every level of decision-making. And I think at the federal level, if we can establish something like a national council for reconciliation, which involves Indigenous decision-makers at those very high levels, so that every decision that affects Metis, Inuit and First Nations is being done through that lens, and so on.”

“So it’s really such a huge topic, but I’d be more than happy to expand on so many of the different issues. Environment — the Indigenous Guardians program. There’s already this wealth of traditional knowledge. And I would like to see the Indigenous Guardians program brought up so that we actually have the people who understand the land taking care of it, and formalized in a real agreement with the federal government.”

“I think the Indigenous peoples’ culture is a unique culture for North America. It’s the only native culture here. We’re going to help preserve and promote the Indigenous culture. And when I come here, two weeks ago, I noticed Indigenous people here living at 70 per cent unemployment rate. And 20 per cent of local people are, very hard even to have their ends meet. … It’s a very worse situation here. Almost, you can call it devastating.”

“Why people like this? I think we have to find the root. One of them, poverty people don’t have hope. Lost hope can cause drug addiction. Can cause alcohol abuse, and all sorts. It’s from the hope. If we are living for a meaning, we are not going to surround ourself to those substitutions, like drug and alcohol. So what happen, is, we should work as a community to find out where the solution is, where the poverty is, rather than keep the same old system, just dumping money and not having any result.”

“And also, a lot of reserves’ natural water resources are contaminated, not drinkable. So, we have to solve this problem first. Because people are under poison, if we don’t have clean water for them. I have some Native people come contact for me, they are in bad drug abuse condition, and need help. I don’t know what to do for them.”

“Thanks for the question. You know, it’s a really unique relationship that the federal government has with hwulmuhw mustimuhw [First Nations people], right? It was one of the very first laws. When Canada became a country, one of the very first laws they made was the Indian Act. And we’ve been living under that Indian Act since the 1800s. And part of that — we talk about, ‘Oh, we’ve got to get rid of the Indian Act.’ But at the same time, what we need to be able to do is ensure that we can transition away from that. With all of the laws that have been in place that have kind of pushed our people onto reserves, and limited our ability to access our own traditional lands and resources — those are the things that kept us healthy, that access.”

“Locally, I’ve been able to bring people together through the Cowichan Watershed Board, ensuring that traditional knowledge and wisdom is incorporated into a cooperative model for taking care of our watershed. In British Columbia I was able to do a project last year where — the Minister of Environment, provincially, asked me to co-chair a group. And we actually brought in the principles of free, prior and informed consent into the BC Environmental Assessment Act.”

“So there are ways. If government makes the commitment, we can take the steps to recognize, Indigenous rights are human rights, fundamentally. And that the investment we make in the relationship between the federal government and Indigenous peoples has got to be driven by self determination. It’s when the nations want to take the steps away from the Indian Act. Part of that is this Land Code that went through, that was one piece of taking away the authority that the federal government has over us as Indigenous people.”

“So I would continue to do that work in Parliament, given the opportunity. Bring people together — because Indigenous rights is human rights. The values and the traditions of our people can lift up this whole country and, I think, support a better way of being in the House Commons. So there’s lots of work to do, we just got to recognize it’s Indigenous peoples that have to drive it, and not be told, and told and told what to do. And that’s self-determination.”