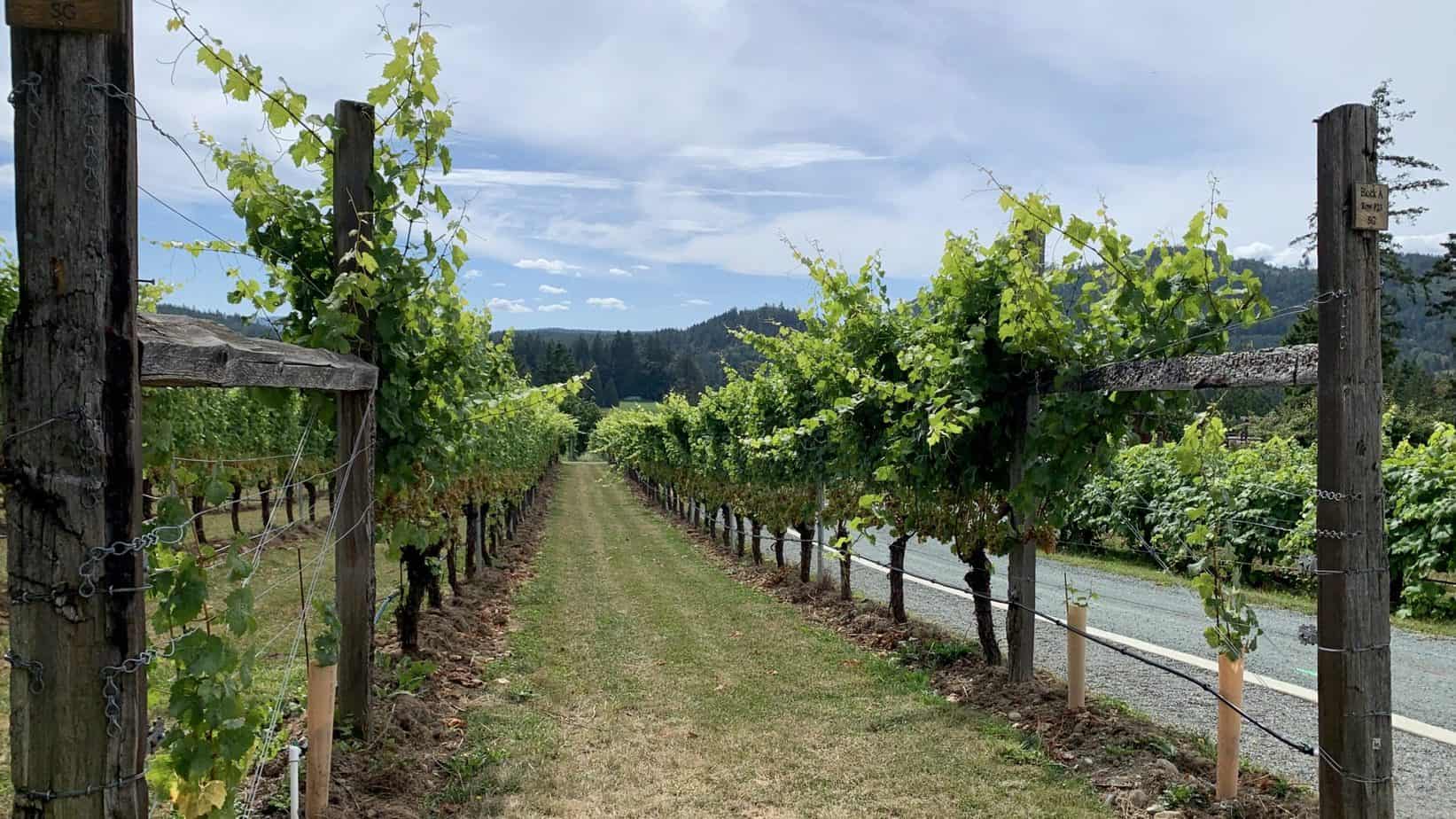 Staycations, wine festival and naming of wine region give wineries a much needed boost.
Shalu Mehta
Support this work. Tell a friend.

A boost in local interest has kept Cowichan Valley wineries afloat in an otherwise difficult year, say representatives of three wine producers in the region.

Setbacks this year include a cooler early summer and various shutdowns and disruptions related to the COVID-19 pandemic. However, more Vancouver Islanders are discovering Cowichan wines as they seek experiences closer to home.

“The local support has been greater now than it ever has before,” says Lorin Inglis, general manager at Enrico Winery. “That has been huge.”

The province, this year, has focused on promoting local tourism. And, a modified Cowichan Valley Wine Festival, which took place over the month of August, was more successful than ever. Also new in 2020: the province has recognized the Cowichan Valley as a distinct wine sub-region.

Despite overall declines in sales this year, some local wineries say they are optimistic that change and innovation spurred by the pandemic sets the industry up for a healthy and sustainable future.

“We get that comment all the time that, ‘Oh I’ve been driving by for years but never stopped in,’” says Inglis. “But now they’re actually stopping in and experiencing the winery, the wine — and purchasing in the end.”

Inglis says while Enrico isn’t able to attract international visitors the way it has before, people from Vancouver Island are supporting the winery much more than they have in the past. He says a similar boon in local visitors occurred when the Okanagan – B.C.’s largest wine region – was experiencing severe wildfires about three years ago.

Blue Grouse owner Paul Brunner says he thinks people are looking for things to do locally and have had their eyes opened to the fact that there is a thriving wine industry in the Cowichan Valley.

Brunner says Blue Grouse shut down halfway through the month of March and reopened in early June with a slow start and a new way of doing things. COVID-19 protocols meant less capacity, a reservation-only system and what Brunner calls a more “curated” wine tasting.

“It forced us to kind of rethink everything we do,” Brunner says.

The winery stopped serving food, closed its bed and breakfast and stopped hosting events. While the nearly three-month shutdown of its tasting room and limited capacity once open affected profits, Brunner says the winery has still been “quite busy.”

Unsworth Vineyard marketing director Chris Turyk says numbers have been down overall at the winery due to limited capacity and only being able to seat guests on the patio. But he says the business has also been able to survive because of the size of the patio and local support.

“It’s noticeable that it’s been more of our B.C. brethren visiting,” Turyk says, noting many people he knows in the wine industry have also taken the time to stay close to home and explore what wines B.C. has to offer.

Outside the tasting room

When the tasting room was closed at the beginning of the season, Turyk says the winery noticed a significant jump in online orders.

However, Inglis says sales at liquor stores are down for Enrico Winery since tastings at stores are not allowed, due to COVID-19 protocols. He says unless people know the products already, they may not take a gamble on trying a new wine.

“It’s cutting down on overall outside sales,” Inglis says.

Meanwhile, Brunner says Blue Grouse has still been doing well in the way of retail sales, but saw revenue from restaurant sales and the tasting room drop dramatically.

Despite the increase in online orders for Unsworth, Turyk says overall sales are down and that the winery took advantage of government programs as needed.

August marked the start of the Cowichan Valley Wine Festival, which took on a different model to accommodate pandemic restrictions this year.

Instead of a big festival packed into one weekend, participants were given the entire month of August to visit 13 different Cowichan wineries and enjoy a tasting at each. (Disclosure: the author of this article participated in the festival.) Inglis says the wineries involved have been “pulling more numbers than before” at this year’s festival.

“We’re talking about keeping it going this way because it’s been incredibly successful,” Inglis says.

Brunner says he prefers this year’s wine festival model because it helps usher more people through the door. He says it gives people the opportunity to visit whenever they want and stay a while longer if they choose.

The opportunity to drive to different wineries in the region gives visitors a chance to explore the area as well, boosting other local businesses, Inglis notes.

“It’s an adventure to go out,” he says. “You’re not just driving to a fast food store. You can go to little tiny shops that normally, you wouldn’t go to.”

In March, new legislation designated the Cowichan Valley as B.C.’s newest official wine sub-region. It’s the province’s first sub-region, or “sub-geographical indication,” outside of the Okanagan Valley. And it means that wines made from at least 95 per cent local grapes can have “Cowichan Valley” on the label.

Brunner says a celebration with the region’s wineries was scheduled for March but the COVID-19 pandemic got in the way.

As the pandemic continued, they settled for a news announcement in July and left it at that, but Brunner predicts the naming of Cowichan Valley as a wine region will be helpful in the future.

“I think everybody is a bit in awe that Vancouver Island has some special recognition,” Brunner says. “I think longer term, it’ll bring attention to the area, it’ll create more respect for what we do and why we do it.”

Inglis also says he thinks the naming of the wine region is a step in the right direction. He says it’s something Cowichan wineries have “been striving for, for years.”

Being named a wine region is one thing, but it’s the wines that are produced – and in a sustainable way – that will ultimately continue to draw people to Cowichan wines, Turyk says.

“I don’t think people would come here specifically based on the fact that it’s been recognized. Because ultimately, that does not a better wine make,” Turyk says.

Cowichan wineries have, however, won several medals for their wines, Inglis says. He says all of the wineries have been working together to make sure the products coming out of the region are “top notch.”

At Blue Grouse, he says they have three businesses: a farm that is expanding from 8.5 to 25 acres, a manufacturing business to process the grapes and turn them into wine and a retail business. He says that in the end, however, it’s all driven by farming.

From a fruit perspective, Turyk says wineries often purchase fruit from growers on the Island. Unsworth also purchases manure from local farmers, composts it on site and then spreads it onto the vines for soil fertility. The vineyard uses cover crop rather than tilling the soil, which helps keep carbon in the soil and provides nutrients to the grapes.

Unsworth Vineyards also has a Community Supported Restaurant program, offering a membership in exchange for meals created from local produce.

A pandemic that inspires change

With the restructuring of operations due to the COVID-19 pandemic, Brunner says he doesn’t think Cowichan wineries will ever go back to “the way things were” before. He says scaling down made him realize some things previously being done weren’t that profitable and that the changes they’ve made have not only been better for the winery, but safer.

“There are improvements we’ve had to confront that will stick,” Brunner says. “We also get to rethink our business model. Everything stopped so we don’t have to go back to doing things the way we did before and we will be more measured and thoughtful.”

While Inglis noted the pandemic has been stressful on staff he says he thinks it helped people understand what their region can do and what can be experienced close to home. Being named a distinct wine region is something that motivates him to keep improving.

“In my opinion, we’re only on step one and we’re just going to continue to climb and climb,” Inglis says.