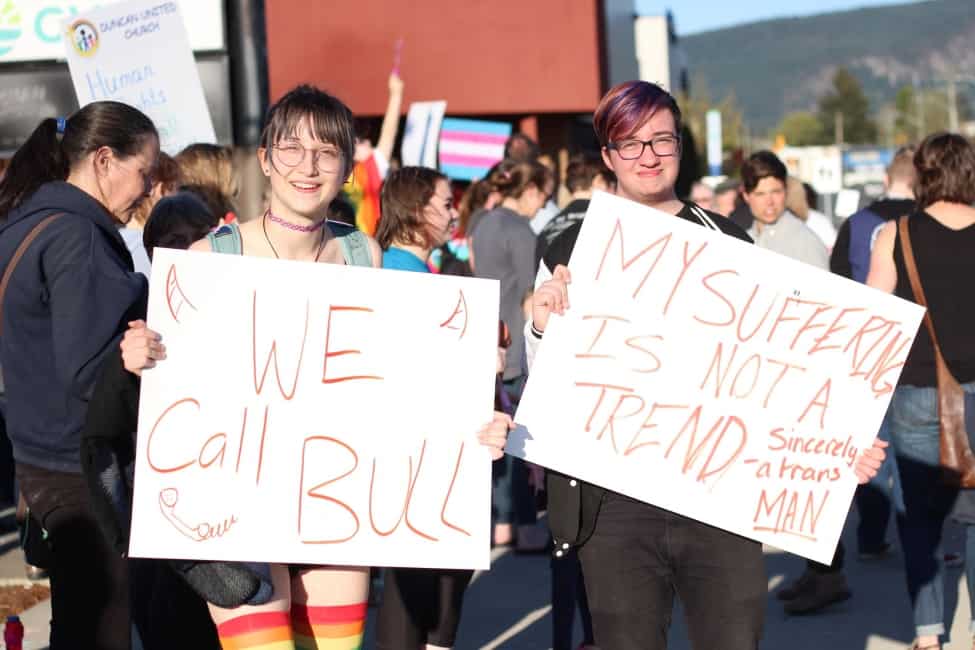 Jac and Cade Whelan raise placards at a rally on April 29 in front of the Island Savings Centre to speak out against controversial speaker Jenn Smith, who opposes anti-transphobia policies in B.C. schools. Jacqueline Ronson/The Discourse

Youth are leading the way to a more supportive, inclusive future in the Valley.

I’d like to introduce you to Jac and Cade Whelan, 17 and 15, two Cowichan Valley youth who have truly impressed me. I interviewed Jac and Cade for a story published earlier this week about increasing demand for teen mental health support.

It’s a big deal that these teens were willing to speak so bravely and openly about their most personal struggles, and it’s a big deal that their counsellor trusted me enough to connect me with them. They’ve been given a lot of good reasons to distrust adults until that trust is earned, and I’m extremely grateful to both of them.

Cade and Jac left me with the impression that not enough adults are listening to what they have to say.

The adults may not be paying much attention, but that hasn’t stopped Jac, Cade, and their peers from working hard to strengthen their community. They’re organizing a Pride parade in Duncan this summer. Their friends are leading a local youth climate strike next month.

Jac and Cade also say they’re involved with the Open Door, a new drop-in youth centre run by the Canadian Mental Health Association, which offers young people basic services like food and showers, as well as the opportunity to connect with mental health supports.

I ran into Jac and Cade on Monday at Love Is The Way, a gathering hosted by Warmland Women’s Support Services in the name of safety and inclusion for people of all sexual orientations and gender identities. The rally was in opposition to a talk scheduled at the Island Savings Centre featuring Jenn Smith, who identifies as transgender but opposes policies and training in B.C. schools around inclusion and safety for students of all sexual orientations and gender identities. Of all the public gatherings I’ve been to in the Cowichan Valley, with the exception of school events, I’ve never seen so many young faces in the crowd. (See more photos from the event here)

It’s clear to me that youth are leading the way on building a more loving, more inclusive future in the Cowichan Valley. We could all learn something by listening a little more.

Last week the Penelakut Island community welcomed school groups and other visitors to the grand opening of a hiking and biking trail built by the students at Penelakut Island Elementary School. At a ceremony in the gym ahead of the opening, school principal Len Merriman said the project brought the students to the land and equally brought culture into the school. He expressed deep gratitude for the leaders of the project and the families whose traditional lands the trail crosses.

The Penelakut Island Elementary School dancers, in full regalia, beamed with pride as they made their public debut, including a song and dance created specifically for the occasion. One of the students had proposed the name that was ultimately chosen for the trail: Spaal ‘i’ Skwitth’uts Shelh, which translates from Hul’q’umi’num’ as Raven and Stellar’s Jay Trail.

After the official unveiling, the crowd was welcomed to walk the trail, with bright sunlight filtering down between the trees. People gathered around campfires along the route and listened to stories told by community elders. Afterward, visitors were invited to a quick lunch before many rushed to catch the ferry back to Chemainus.

For more photos and stories from the day, see these Facebook posts by the Cowichan Valley School District, Mid-Island Focus, and Riley McIntosh, the contractor hired to lead the project.