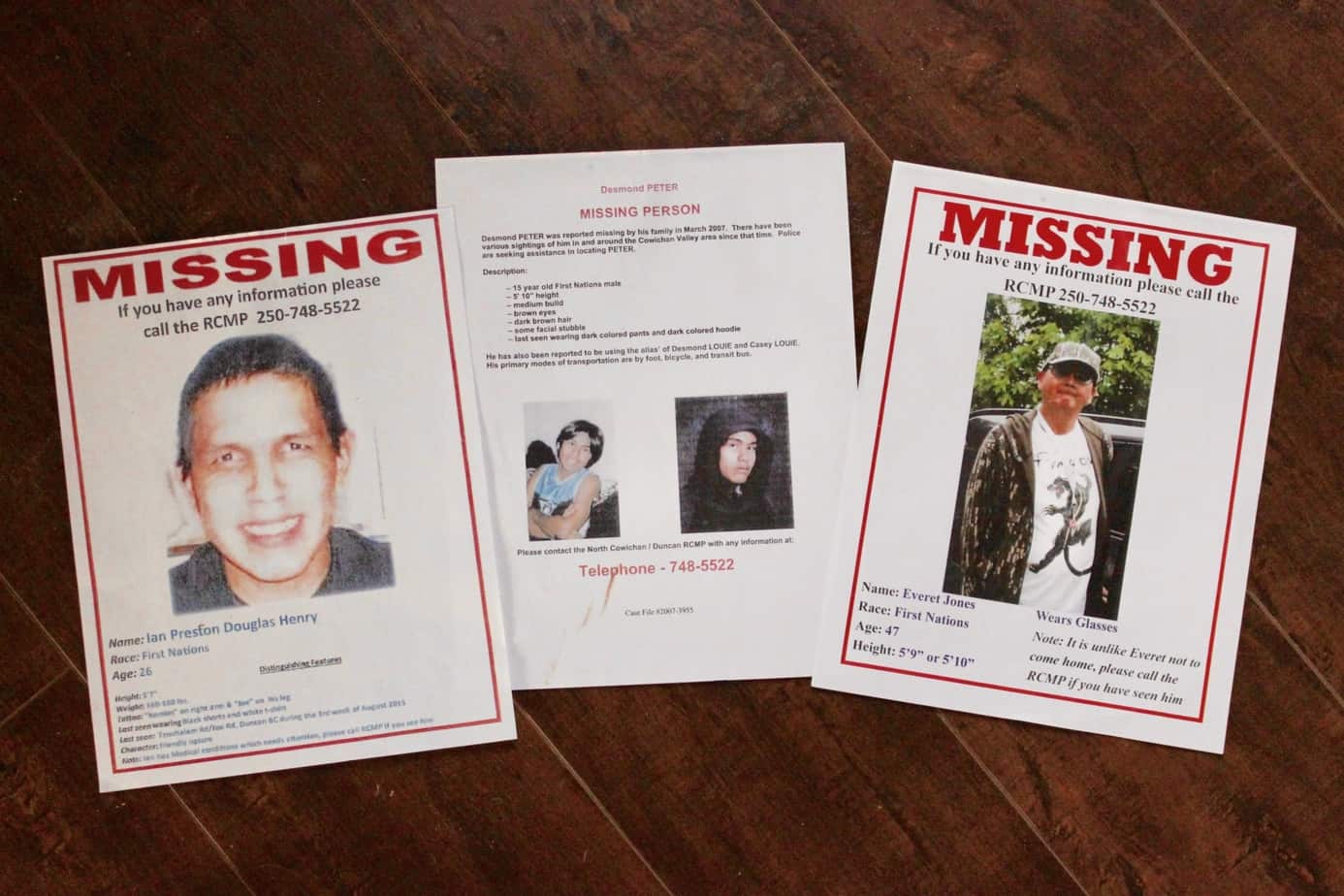 Desmond Peter, Ian Henry and Everett Jones have all gone missing from the Cowichan area since 2007. Their families are still searching. Jacqueline Ronson/The Discourse
Cowichan Valley

Where are Cowichan’s missing men?

Families of the local missing and murdered people are still waiting for answers
Jacqueline Ronson
Support this work. Tell a friend.

This is from our Cowichan Valley weekly newsletter. You can subscribe here.

Three Cowichan men have gone missing since 2007, never seen since. It’s an ugly fact that doesn’t fit well with the beauty of the place we call home. All three were Indigenous, members of Cowichan Tribes. All three had intellectual or mental health challenges. Desmond Peter disappeared at the age of 14 in 2007. Ian Henry was 26 when he was last seen in August 2015. Everett Jones, age 47, went missing half a year later.

Some have suggested the cases could be connected, that someone might be preying on vulnerable men. The RCMP have said they have no evidence to support that conclusion. The families are still searching.

On Feb. 9, local organizers will host the second annual walk for Missing and Murdered Men, Women and Children, to start from the Quw’utsun’ Cultural Centre. It will be a time for the community to come together in a show of strength, to say in one voice that we cannot lose more of our own, and we must work harder to find those who are still lost.

The organizers are still looking for volunteers and donations. If you can be available on the day of the march to help with traffic control, registration, or serving food, or if you are able to offer a monetary contribution, contact the organizers through their Facebook page.

Helen Joe was still a teenager when her older sister, Catherine Theresa Joe, went missing in 1977. “She went out one night in January, then she never came home,” she says. Her family searched for her for six months. “Every day we were getting phone calls, saying they had seen her here and there.” But the leads came to nothing. Eventually they got the news they had been dreading. A hiker had found human remains out past the hospital.

It was Helen’s mother who went to identify the body. Helen asked to go with her, but wasn’t permitted. She remembers her mom coming home, and she couldn’t stop crying. “Nothing I could do,” Helen says. Her mom passed away soon after, on Christmas Eve. Christmas is still a particularly hard time for the family.

Helen still misses her sister terribly. “She was a canoe puller, and she used to clam dig, and she used to go pick strawberries in the States, and then she’d come back home. She was a hard worker. She used to knit, too — Cowichan sweaters.” She left behind two young children, who were raised by the rest of the family. The crime has never been solved.

Helen, a member of Cowichan Tribes, is among the local organizers of the upcoming walk for Missing and Murdered Men, Women and Children. The three Cowichan men who have disappeared more recently are part of her extended family, too. She remembers her nephew Ian Henry, last seen in August 2015, always biking around town and saying hello to everyone.

Helen and her younger sister have been travelling across the province to tell their story and organize with the families of other missing and murdered people. “Me and my sister just hope something comes of this,” she says.