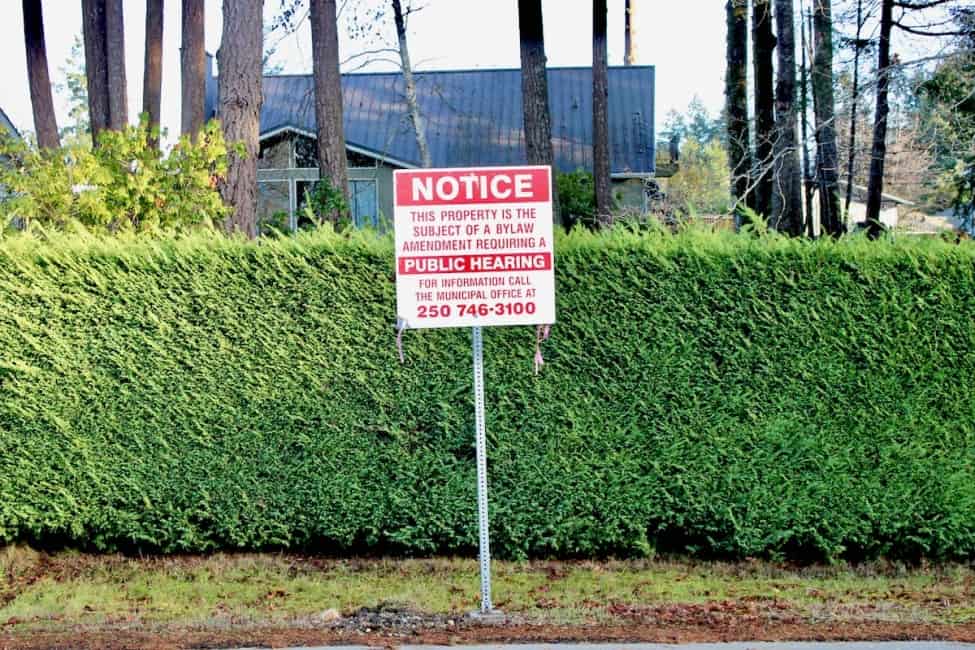 This article is first in a series on development in the Cowichan Valley. Want to be first to know when the next story comes out? Sign up for our weekly newsletter.

Community groups are lauding proposed new rules from the Municipality of North Cowichan that would give residents more say on building developments in their neighbourhood.

“We think it’s fantastic,” says Mariah Wallener, who is a director of the Sahtlam Neighbourhood Association. The proposal “really codifies the attitude that we’ve been getting, which is, ‘Your opinion matters to us, and we want your opinion.’”

The Sahtlam Neighbourhood Association is part of the Cowichan Communities Coalition, which formed earlier this year to push for more public input on development proposals in the municipality. Wallener says she’s seen a “180-degree switch” on North Cowichan’s attitude towards community engagement in the last few years.

In the past, she says, the association was “made to feel like we were just an irritation and an annoyance.” But that’s changing, she says, particularly under the leadership of new staff like Ted Swabey, who stepped into the role of chief administrative officer in the municipality just over a year ago.

Bernie Jones, from the Chemainus Residents Association, appeared before council in 2015 to ask for a system that would notify community groups whenever a development application affecting their neighbourhood comes in. Although mayor and council asked staff to look into it at that time, “nothing was done for years,” Jones told The Discourse.

Jones presented to council again in May 2018 as part of the Cowichan Communities Coalition, asking again for more consultation with community groups on development projects. This time, he says, he was reassured that new rules were already in the works.

If passed, the Development Procedures Bylaw will outline the steps staff and council must take when they receive development applications, to ensure residents learn about and get the chance to respond to applications that could impact their neighbourhood.

“This sounds really dry — ‘Development Procedures Bylaw’ — but it is the single most exciting thing for me, as somebody who cares about public transparency,” says Natasha Horsman, North Cowichan’s manager of communications.

It hasn’t always been easy, he says, for the public to find out about development projects that are open to public feedback.

Hutton sat down with The Discourse to outline some of the features of the proposed new rules. The municipality could not provide a copy of the bylaw because its content is not yet finalized; staff expect to present it for council’s consideration early in 2019. But staff presented council with an early draft of the bylaw in an Aug. 22 staff report, and sought input from neighbourhood groups and developers.

The proposed new rules would allow the planning director to maintain a contact list of neighbourhood groups who want to be notified about new development applications in their area, so they can provide feedback early in the process.

For some types of applications, developers will also be required to hold public information meetings to let the public know about their plans and answer questions.

“We’ll be expecting the development community to have a bit more conversation with the community,” Hutton says.

The bylaw would also set new rules requiring more obvious signage in a neighbourhood where a development has been proposed. The signage might include a colour-coded sticker system that indicates, for example, when a public meeting has been scheduled or when the application has moved to the next stage in the approval process.

North Cowichan has also been working on a website to present information about active development applications, called Building North Cowichan. The site is currently active but not complete, and the municipality says it welcomes any feedback so it can be improved before its official launch, scheduled for February 2019.

In 2017, the Sahtlam Neighbourhood Association sued the Municipality of North Cowichan and the Vancouver Island Motorsport Circuit over the circuit’s development. Neighbours alleged the circuit is really a racetrack and a noisy nuisance that illegally interferes with their quality of life, in violation of the municipality’s own zoning bylaws. In court documents, the municipality and the motorsport circuit say the circuit is within permitted uses of the area’s current zoning and hasn’t caused unreasonable noise that would interfere with residents’ ability to enjoy their properties.

The whole conflict might have been avoided if a bylaw like this one had already been in place, Wallener suggests. If residents had known about the circuit before it was built, they could have raised concerns from the outset, and the municipality could have responded by requiring noise mitigation to be incorporated into the development, Wallener says.

“I absolutely think that that would have made a huge difference,” she says.

This story is part of a series on development in the Cowichan Valley. Want to find out what big developments are planned for your community?

Sign up for our weekly newsletter to find out when the next article in this series is published.

Who’s welcome in your backyard?