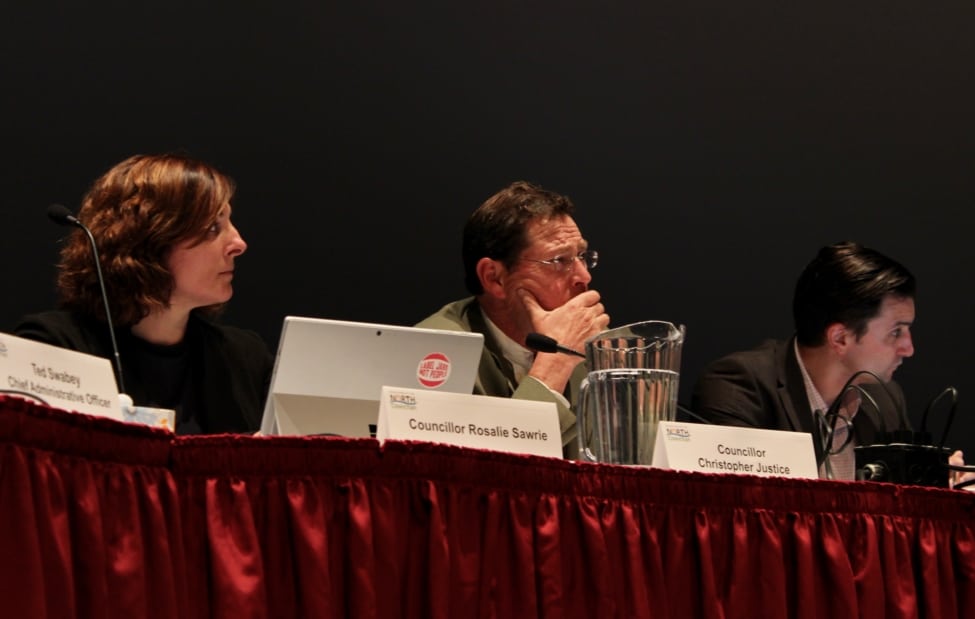 Municipality of North Cowichan councillors Rosalie Sawrie, Christopher Justice and Rob Douglas voted on Oct. 4, 2019, against a proposal by the Vancouver Island Motorsport Circuit to rezone its property and expand its facility. Jacqueline Ronson/The Discourse

The rezoning would have allowed for a major expansion of the controversial facility.

Just before 2:30 a.m. on October 4, 2019, the Municipality of North Cowichan council voted no on a rezoning application from the Vancouver Island Motorsport Circuit (VIMC) that would have made way for a major expansion of its track.

The decision came after a public hearing that lasted more than 12 hours over two evenings this week at the Cowichan Performing Arts Centre.

What’s at stake is the future of a controversial facility at the base of Mt. Prevost, near the City of Duncan. The motorsport circuit opened in 2016. There was no public process ahead of its approval and construction. After operations began, neighbours in the adjacent community of Sahtlam complained about racetrack noise that they said severely impacted their quality of life and ability to enjoy their properties.

The Sahtlam Neighbourhood Association, a group formed in response to the noise issue, filed a lawsuit in 2017 against VIMC and the Municipality of North Cowichan. The lawsuit alleged that the track was a nuisance, and illegal on the industrial zoning on which it lies. The parties ultimately settled the lawsuit, with the zoning uncertainty unresolved.

The zoning amendment before council this week would have created a new zone, clearly spelling out all the things VIMC is doing and wants to do with its property. That includes plans for a major expansion of the track itself, more than doubling its current length and tripling its footprint. It would have also secured legally-binding commitments from VIMC limiting days and hours of operation, and imposing sound limits.

Council’s decision this week means that the property will not be rezoned, as proposed. What that ultimately means for VIMC’s expansion plans is not clear. North Cowichan CAO Ted Swabey said towards the end of the meeting, before the vote, that it wasn’t clear what would happen in the event of a “no” vote. He said that, in that case, municipality staff would seek advice from its lawyers and proceed from there.

Paul Rossmo, general manager of the Vancouver Island Motorsport Circuit, declined to comment when The Discourse Cowichan approached him immediately after the council’s vote.

This week’s public hearing began at 6 p.m. on Oct. 1. The public filled a great majority of the theatre’s 731 seats. Consultants to VIMC, along with North Cowichan staff, presented and took questions from councillors for nearly three hours before the meeting opened to public input.

The Discourse Cowichan was interviewing a former employee of the track when Marie Baynton, VIMC’s director of community engagement, approached to give him a ticket with a number indicating his speaking order. There appeared to be a coordinated effort for VIMC supporters to monopolize the first 30 or so speaking slots. With the exception of one Cowichan Tribes elder, no voices of opposition were heard until after 10 p.m., at which point the crowd had thinned considerably. The meeting adjourned at 11 p.m.

The supporters spoke to the economic benefits of VIMC, including many financial contributions to local organizations. They spoke to its value in attracting people to the Cowichan Valley. They said VIMC allows local people to have fun and learn to drive safely. Many said that VIMC’s promises for sound mitigation, environmental protection and contributions to the municipality go well beyond what should be expected from a business. Several residents living within a few kilometres of the track said the noise is not a problem for them, and that they support the facility.

Opposition comes out in force

On Thursday evening, it was the opposite story. For seven hours, council heard from members of the public who overwhelmingly opposed the rezoning application. Many spoke to personal noise impacts and declining property values. Residents several kilometres from the track said the noise prevents enjoyment of outdoor property. Some said they retreat indoors and keep windows closed in the summer and still can’t stand the noise. Some spoke to health impacts of what they say is a continued assault.

Others argued for environmental protection and climate change action. Several members of Cowichan Tribes gave impassioned speeches about the cultural and spiritual significance of Swuq’us (Mt. Prevost) and the imperative to preserve that land for people, animals and plants. (Cowichan Tribes also submitted formal comments objecting to the rezoning.)

When no one present had any more to say, it was past 1 a.m., and more than 100 people still sat in the audience. Council members briefly consulted with North Cowichan’s lawyers and returned to deliberate.

Council votes no on track rezoning

Councillors Christopher Justice, Debra Toporowski, Kate Marsh, Rosalie Sawrie and Rob Douglas each spoke to arguments they had heard, at the hearings and in written comments, opposing the track. They spoke to noise impacts, climate change, environmental protection and reconciliation.

Councillor Tek Manhas spoke about the economic benefits projected by VIMC, as well as its commitments with regards to noise mitigation, environmental protection and contributions to the municipality.

Mayor Al Siebring spoke to the history of VIMC’s involvement with the property. He was a councillor when North Cowichan approved the sale of the land.

“What we have there today is not what I thought we were approving when the issue came before us in the 2011-2014 term,” Siebring said. He said his vote at that time was based in part on what he thought was a binding commitment to have no more than two street-legal vehicles on the track at one time. In fact, when the track opened, purpose-built race cars were allowed. VIMC’s website indicates that up to 15 vehicles can use the track at one time.

This created “trust issues,” Siebring said. That’s why the municipality’s lawyers have been involved in securing these commitments from VIMC, he said. And, without the rezoning, there’s no commitment from VIMC to the benefits and mitigation it has promised, he added. It’s on the basis of “trust, but verify,” that he would vote in favour of the rezoning, the mayor said.

Council voted down the rezoning bylaw just before 2:30 a.m., with Siebring and Manhas in favour and Justice, Toporowski, Sawrie, Marsh and Douglas opposed.

As the remaining audience filtered out, twenty or so community members who opposed the application gathered in the aisle of the theatre. They hugged each other in celebration. Many had tears on their cheeks.