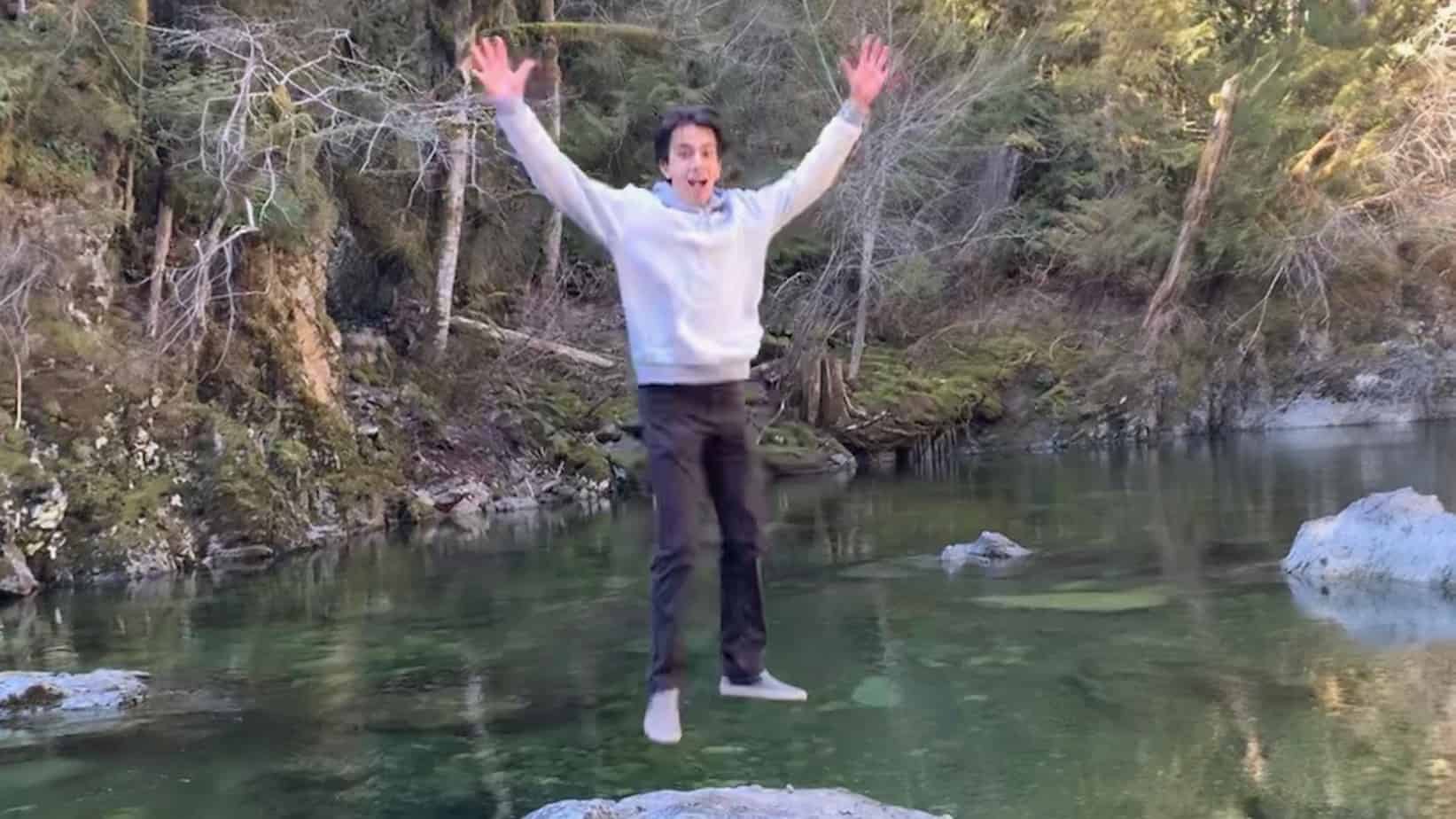 Likewise, instead of starting university this fall in residency, they will be taking online classes from home, as carefully mapped out plans for work, travel or post-secondary education have had to be adjusted for this year’s graduates.

But in their speeches and in conversations with The Discourse Cowichan, these graduates show their resiliency. They’ve been able to roll with the pandemic’s punches and say they are up for whatever the future has in store.

Making the best it

When Nicklaus Badyal, Frances Kelsey Secondary’s valedictorian, delivered his graduation speech last week, only two people were in the audience – the school’s principal and librarian. They were there to record his speech, later included in a graduation video given to all his classmates. In part of this speech, he said:

“I do not want to dwell on the fact that our graduation was unfortunately cut short due to COVID-19, but I will say this – all of us took on the huge challenge of adapting to online classes in the best ways possible. We pushed through the lack of motivation and self doubt to come out on top. Our grad will be immortalized in history which means so will we. Every single one of you deserves more than this, but I commend you for doing everything you can to make it a good year. Let us make the best of this summer and the years to follow. Wherever you end up, in any form of career, I know each and everyone of you has what it takes to be a leader. I wish you all success. Continue to laugh, celebrate as if you will never be able to leave your house the next day for a year, treat everything like it’s due tomorrow, and don’t ever forget the Kelsey grind.”

Badyal, who performed in several school theatre productions, says he wishes he had the energy of an audience to draw from. “But given the circumstances I guess it was the best way possible to get it out there.”

Over a period of three days last week, Frances Kelsey grads received their diplomas during 15-minute, individual ceremonies. Badyal says that he enjoyed his graduation experience more than he had expected.

“It was only 15 minutes, but it was a good 15 minutes,” he says. “It is unfortunate that I didn’t get to graduate with all my friends and the rest of my classmates, but, you know, you’ve just gotta make the best out of what you got.”

Badyal says that he and his classmates were in shock when the pandemic first hit, and things such as his final track and field season were cancelled. It also made his friend group question whether they wanted to attend university in the fall if they could only do it online. But over time, they all eventually decided to stick with their plans. Badyal plans to study science for two years at the University of Victoria before and then hopefully a four-year pharmacy program at the University of British Columbia.

Looking back at the past school year, Badyal says he realizes that there’s no point in worrying about things beyond your control. “In the end I think we’re all happy with the way it turned out, everything that we accomplished and the opportunities we’re given for grad, and everything like that,” he says. “It just was what it was.”

The weeks leading up to Spring Break were crazy enough for the students at Chemainus Secondary, says class valedictorian Dyson Blitterswyk. In February, two suspicious school fires led to school closures. Then, of course, COVID-19 happened.

“This whole year has been very different,” Blitterswyk says. “We’re not okay with it obviously. It’s unfortunate. But we’ve just gotten used to it and we’re living with it right now, and it doesn’t really bother us too much.”

He was glad that students were allowed to return to school one day a week in June. Blitterswyk says he loves studying but found it challenging to do schoolwork online.

He says that because the curriculum this spring was halved in many of his classes, he is having to alter his summer plans a bit. “Usually, I work between 30 and 40 hours a week, but I probably will be doing a lot less because I am going to still work on schoolwork throughout the summer,” says Blitterswyk, who plans to study electrical or civil engineering at the University of Victoria. “I’m working on calculus right now so I can be ready for university when it comes.”

Blitterswyk is a rare Class of 2020 valedictorian who gave his speech in front of classmates. On June 20, because there are only 41 students in the graduating class at Chemainus Secondary, he was able to speak in the school gym to his peers, who sat apart from each other. In small groups, students went to another room where they were joined by family members for graduation ceremonies, which were live-streamed back to the gym. In his speech, he said:

“We are exceedingly unlucky to have had our grad year set directly in the middle of a pandemic, but we all need to look on the bright side of things. Despite what’s happening in the world right now, we are resilient. Compared to other parts of the world, we are lucky. Graduation is a life event that cannot be overshadowed, and it cannot be forgotten. We all stand here as graduates, and whether we stand all together or as distanced individuals, we are still the class of 2020. As disappointing as it is, we have all learned life lessons in determination and have each remained steadfast in our academic progress. We have grown both as individuals and as a team, and we have risen resolutely from the ashes of our senior year. Growing from our disappointments, the class of 2020 will be remembered not as the class that missed out, but the class that came together and exceeded despite everything that was thrown at us.”

Grad went well, Blitterswyk reports. “We still pulled through. We all worked together to be where we are now thanks to the help of all the teachers and staff and especially each other and our families.”

There are some positives

Maxine O’Leary says she sees some upsides to what she and her Cowichan Secondary classmates have gone through.

“Some positives came out from us all just taking time for ourselves and being around our families and going through this all together,” says O’Leary.

The first month of the pandemic was the worst, she says. “It has been pretty hard not being able to see my friends every single day. And we’ve kind of all kept our distance this whole time. We still haven’t really been all together yet.”

Cowichan Secondary grads had the option of having an individual ceremony this past week at the school gym or a “drive-to” celebration yesterday evening, where teachers in decorated cars delivered diplomas to students at their homes. O’Leary opted for the latter. O’Leary’s valedictorian speech, live-streamed last night, capped off the graduation. Part of her speech went like this:

“We had all anticipated a great finale. One last moment to cherish together. Our year was cut short and we took the first six6 months for granted. I know if we had seen this coming we would have spent a little more time laughing and less time caring about what others think, we would have hugged our close and not-so-close friends a little tighter and we would have said a proper goodbye to the teachers that have inspired and helped us grow into the leaders that we are today….We are so lucky to be healthy and safe in a world of utter turmoil and we must remember to always stay positive and to love and respect each and every person on this planet equally. We are in this together and always will be. I am so lucky to have been a part of this graduating class, To have met so many incredible individuals who will continue to do great things. We have overcome so much, we can do anything and we will be the change.”

She says that she and many of her classmates will be sticking closer to home than they had anticipated. “Everyone had plans to either move out or go travelling. No one knows when it’s going to be possible to do that.”

O’Leary plans to study communications at Concordia University in Montreal. While disappointed that she has to start her university career online, she says it will allow her knee more time to recover from surgery earlier this year. O’Leary played rugby for her school and Team BC the past two years, and hopes to join the varsity rugby team at Concordia.

O’Leary takes pride in being the Class of 2020 and expects it to be a bonding experience for graduates all around the world. “It’s pretty special in the way that we’re all just going through this together,” she says. “I think it’s going to connect us a lot more as a generation. And hopefully, we can make some changes and just go out in the world and become better people because of this.”