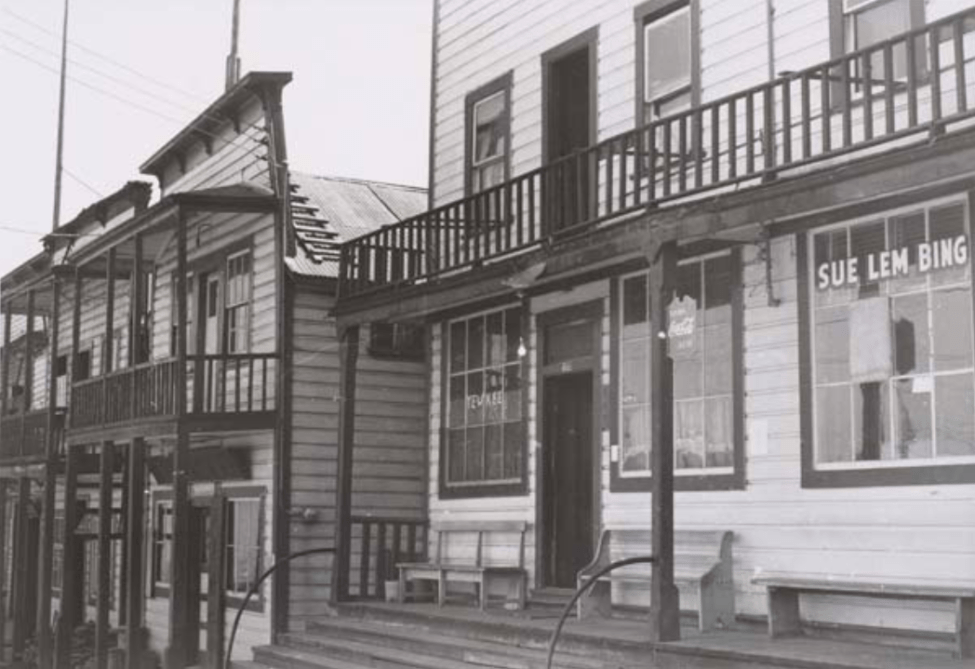 Have you heard that Whippletree’s buildings came from Duncan’s historic Chinatown? It’s a great story, but not entirely true.

Whippletree Junction stands out next to the Trans-Canada Highway, a few kilometres south of Duncan. It’s a collection of restaurants, shops and artisan workshops in old log cabins and false-front shops, reminiscent of a gold rush era.

“I believe that Chinatown was moved to Whippletree but that’s about all I know. Is there an historical story related to this?” one of our readers, a resident of Maple Bay, asked The Discourse Cowichan.

In fact, there is a great story behind Whippletree’s Chinatown connection, but it’s not as straightforward as its usual telling.

I talked to Willie Chow, who’s going on 85 years old, about Duncan’s Chinese history. He’s been here since 1951. His family has been part of the downtown Duncan business community for five generations. He’s one of the last ones who can tell these old stories, he tells me.

Chinese immigrants have come to Cowichan since the latter part of the 19th century, to work on the railroad, in mines, factories and elsewhere. Their movement was restricted by racist immigration policies, including the head tax and the Chinese Immigration Act. These laws limited the ability of Chinese people to come to Canada and bring their families to settle here.

Despite this, in the early 20th century, Duncan had a bustling Chinatown, with merchants and hotspots catering to the Chinese community and others who came to join in the fun. It was located off of Government Street, where the Round Building and Law Courts are today.

Willie tells me that, by the late ‘60s, the City of Duncan decided that Chinatown was “an eyesore,” and it bought up all the buildings to have them torn down. The Chinese community’s pleas to have that history preserved ultimately went unanswered.

Randy Streit won the contract to do the demolition. And he recycled some of the lumber to build the first shops at Whippletree Junction, including Streit Bros. Antique Trading, which he ran until 2007 with his brother Ernie.

Buildings added later to Whippletree Junction have their own stories. What’s now the Junction Cafe was, from 1912-1940, Cobble Hill’s post office. The Wickertree Furniture building was once a fish cannery in Sooke.

Today, an outdoor gallery in an alley off Station Street preserves part of the story of Duncan’s Chinatown, with historical photos and information. There is also a historic Chinese cemetery at Hillcrest, beside the Cowichan Valley Trail, which used to be the railway line. The Duncan Chinese Community Association mounted an effort in recent years to clean up and preserve the cemetery.

But Duncan’s Chinese community isn’t what it once was, Willie tells me. “Now, not too many people in Duncan now. Most of people, all the young people move away. You couldn’t find a job, some go to Vancouver. Even my children.” Two of his five children live in Vancouver, he says. The arrival of the big box stores killed most of the family-run shops and businesses, he says.

In spite of the challenges, his son carries on the family tradition, running the Area 51 Skateshop in downtown Duncan, right across from where historic Chinatown once stood.