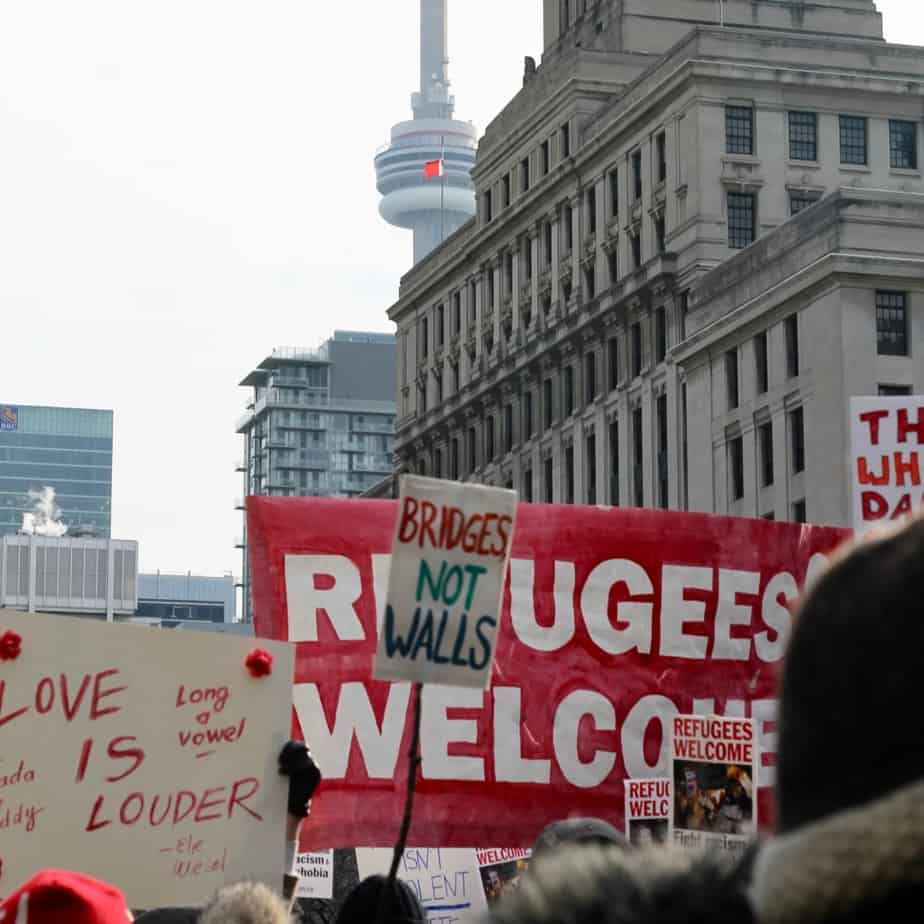 Global migration and accepting refugees is one of the top global issues where Canadians believe the country can make a difference, according to respondents of the 2018 Canada's World Survey. Stacie DaPonte/Flickr

Canada can be a role model for the world when it comes to global migration say survey respondents – but advocates question if that’s enough.

Canadians increasingly believe multiculturalism, diversity and inclusion are their country’s most notable contribution to the world — a shift away from peacekeeping and foreign aid, according to a survey of over 1,500 Canadians released today.

The 2018 Canada’s World Survey, conducted by the Environics Institute for Survey Research, is an update to a survey they first conducted in 2008. It measures how Canadian attitudes have shifted and looks at issues that have emerged over the past decade.

A majority of Canadians continue to see Canada as an international role model with 86 per cent of respondents saying the country can have a positive impact on world affairs — both in 2008 and in 2018.

At the same time, 25 per cent of respondents think the most important contribution the country can make to the world is accepting immigrants and multiculturalism, a shift from ten years ago when peacekeeping topped the list.

The Discourse partnered with Environics to gain early access to the findings of the Canada’s World Survey. After combing through the data, we want to dig deeper into what Canadians think about welcoming refugees.

How Canadians feel about refugees

Amea Wilbur, training manager at the Pacific Immigrant Resources Society (PIRS) in Vancouver, says she felt a shift in attitude over the last two years with the influx of would-be volunteers contacting her team. “I really saw when the Syrians came that people really stepped up. Like we got calls constantly,” she says, adding that these were often people who had maybe never considered volunteering to support newcomers before.

Drawing from what the respondents said, the survey estimates that two million adult Canadians were involved directly in the sponsorship of refugees, with another seven million who knew someone who did.

Francisco Rico-Martinez, co-director of the FCJ Refugee Centre in Toronto, isn’t surprised at those numbers — but what he really wants to know is if Canadians are building meaningful relationships.

It has to go beyond getting together for tacos, he laughs. “We need to create a more fair society for everyone.” For him, that means not just recognizing multiculturalism but also practicing it in our justice system, social services and economic opportunities.

“We have to build a society that is more inclusive even now — that is creating more equality [and] more justice.” And while Canada may be a role model for other countries, Rico-Martinez says it “needs to be a more aggressive role model” that fights for social equality.

Should Canada do more to help the global refugee crisis?

Yasmin Ullah, a 26-year-old Rohingya woman, recalls her journey to Canada as a refugee from Myanmar. “There are so many willing people to help, willing to give — it’s incredible,” she says.

Over half a million Rohingya, a stateless Muslim minority, have fled Myanmar since conflict escalated there in 2017. Ullah’s family escaped to northern Thailand when she was three years old. They lived there for years while trying to find a way through the international asylum system, relying on fake identification.

Eventually, she says, she, her brother and father were privately sponsored by church groups and came to Canada in June 2011. Today, all three are Canadian citizens living in Surrey, B.C.

“The first thing I wanted to do in Canada was get back on my feet,” says Ullah, who now works at a dental office while balancing political science courses at Kwantlen Polytechnic University and Rohingya advocacy work. She believes there is a tendency to think Canada has done enough as a society, but says there is huge potential to do more — both through financial support for resettlement abroad and through welcoming more newcomers into the country.

“It’s not a question of taking them all, but is Canada as a community and as a society doing enough?” adds UNHCR Canada’s Representative Jean-Nicolas Beuze. He agrees Canada has the capacity to do more, but finding the threshold for how much more can be a difficult public discourse to have that is highly politicized.

Over the next couple of months, leading up to World Refugee Day on June 20, 2018, The Discourse is investigating Canada’s refugee system and how it responds in times of crisis, like those unfolding in Syria and Myanmar.

One of the things that’s missing from this conversation, says Wilbur with the Pacific Immigrant Resources Society, are “stories of refugees, by refugees.”

“It’s important for them to tell their own stories,” she says, adding that doing this will help tackle the stereotypes and misconceptions that can persist.

So, while in general it seems that Canadians feel that their work with refugees and migration is one of their key global contributions, we want to hear from people who are directly affected by this. Whether you are a refugee, are seeking asylum or helping with resettlement in Canada, we want to find creative ways to share your experiences in your own words.

This piece was edited by Lindsay Sample with fact-checking and copy editing by Jonathan von Ofenheim. The Discourse’s executive editor is Rachel Nixon.

The Discourse partnered with the Environics Institute for Survey Research to get early access to findings of the Canada’s World Survey. The survey was conducted by the Environics Institute for Survey Research in partnership with the Canadian International Council, SFU Public Square and the The Bill Graham Centre for Contemporary International History.

Environics’ support of the project does not imply endorsement of or influence over the content produced.

Editor’s note: In a previous version of this story, the headline read “Canadians see welcoming refugees as our top international contribution, survey finds”. The survey findings in fact refer to Canada’s most positive contribution to the world being seen as multiculturalism and accepting immigrants. The headline has been amended.