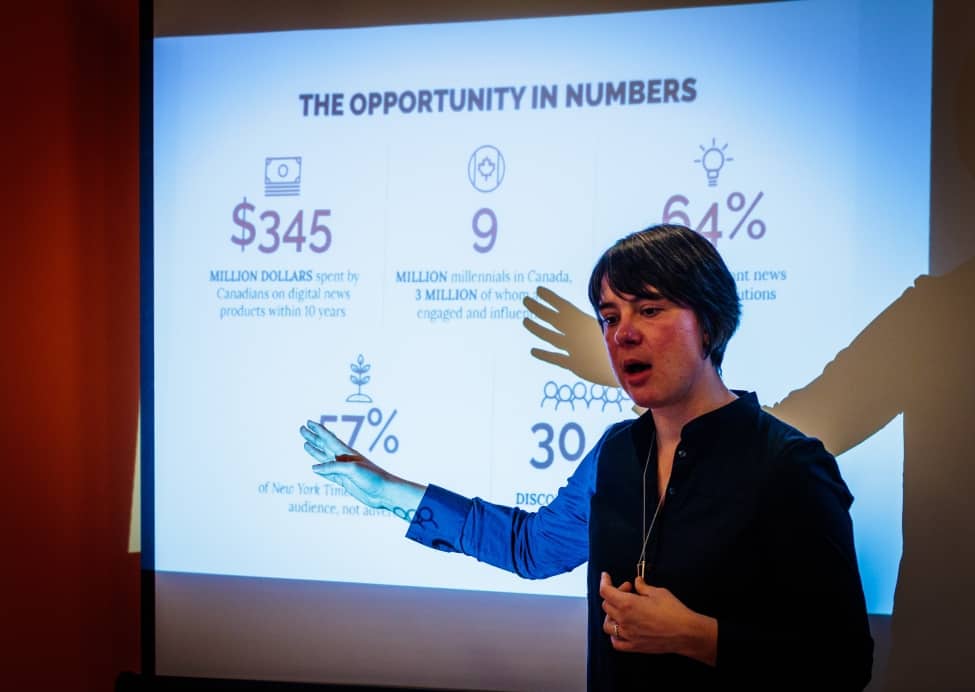 While news media continue to shed jobs, Discourse is investing by taking its model national. Here's why inviting the public to become owners is the logical next step for a newsroom built on serving the public.

After months of researching, listening, planning, seeking advice, and making hard decisions, on Nov. 7, I stood in front of a packed room in Toronto to make an exciting announcement: we are taking Discourse Media national.

I am super proud of what our small team has accomplished in the past three-and-a-half years. Discourse has reached millions with our innovative model of community-based investigative journalism. We’ve worked with dozens of media outlets, ranging from the Terrace Standard to The New York Times. We’ve been recognized with national and international awards. And we’re proving that investigative journalism can generate revenue.

But Discourse has more to offer Canada than what we can achieve as a scrappy, primarily west coast startup. Canada needs a national investigative journalism company. For Discourse to achieve the impact it can have on policy, citizen decision-making and national narratives, it needs a profitable, scalable business model.

Key to realizing our growth plans is securing our first external investment. Today Discourse is launching a capital campaign to raise $1 million in equity financing, through a combination of traditional and crowd investment.

We want you to be part of it.

We’re taking Discourse national because we believe its mission — to expand and improve public discourse — is more critical today than ever. But we also see a significant business opportunity in this particular moment in time. And we think Discourse’s good news story can be an early sign of the turnaround of the Canadian media industry.

It’s been a brutal two decades for journalism in Canada, especially for newspapers, which remain the primary source of original fact-based reporting in the country.

The perception that Canadian news media are in a death spiral was perpetuated by lobbying efforts during Heritage Minister Mélanie Joly’s recent review of cultural industries. Newspaper industry advocates argued for support to help “make the transition to digital,” saying that the models needed to finance journalism have not emerged. Joly responded by rejecting any intervention that could be interpreted as a bailout of an “unviable business model.” An unintended consequence of the policy discussion was that it became even more difficult for startups to make the case to investors that Canadian digital news media can be profitable.

But this persistent focus on the decline of the advertising-dominated news industry disguises a growing unmet demand for high quality, trustworthy journalism — and that is a significant opportunity. If there is no money to be made in Canada, why are foreign players such as The New York Times, BBC and Guardian investing in growing their Canadian audience? Why did The Athletic, one of the hottest news media startups in the States, expand to Canada so early in its development?

The revenue models have emerged. Discourse has spent the past two years experimenting with and researching models working in markets that are farther along the path of digital disruption. Look at how the Times has shifted away from advertising dominance by focusing on serving its audience, as opposed to chasing clicks. The Grey Lady now generates 57 per cent of its revenue from its audience, not advertisers.

Follow the stories of new digital startups in Europe, such as Spain’s El Español and Holland’s De Correspondent. They have built profitable and growing outlets based on audience membership revenue. Note how the Texas Tribune has weaned itself off heavy reliance on philanthropic dollars by developing a hugely popular events series.

This shift is only starting to happen here in Canada. The Globe and Mail’s paywall is shifting towards hyper-serving its core audience. Canadaland is growing based on responding to a very specific gap in media coverage. The Athletic Canada has grown its subscription base dramatically in only a few months.

All these examples have one thing in common: they are focused on creating value for their end consumers rather than chasing the page views and clicks that advertisers favour. They focus on deepening engagement with their audience rather than attracting as many eyeballs as possible.

These examples show how we in the news industry have been preoccupied by the wrong question: how can we fix the broken system? Instead, we need to be asking: what do people need?

The future is now

When Discourse started asking what do people need? the future of media began to look a lot brighter. The audience research is clear: Canadians want to be well informed, and they strongly believe that journalism can “keep the powerful honest.” Trust remains a barrier; much damage was done with front-page political advertising and sponsored content, and digital media upstarts have struggled to gain credibility. But we can solve for these problems, and it’s worth it, because there are large segments of the Canadian public whose information needs are not being met.

Discourse is responding to this opportunity by filling a gap left by newsroom budget cuts to investigative journalism, and we’re developing journalistic practice and technology that makes our content more responsive to community needs.

The concept behind our business model is simple: we think of journalism as a service. Rather than covering the same breaking news events as other outlets, we devote our resources to stories, issues and communities where there is an acute need for information, journalistic probing and storytelling. Stories like how severe court delays for child protection cases are harming families. And how the children of overdose victims struggle to access the support they need to avoid addiction.

Why is now the right time to take Discourse national? First, with over 70% of Canadian digital ad revenue going to Google and Facebook, the ad-based business model has reached a tipping point, and reinvention now needs to happen. Second, the way we pay for the things we value online is changing; I can imagine a world in which paid news media subscriptions reach levels similar to Spotify (50 million) and Netflix (95 million) globally. Third, the so-called “Trump bump” (a rise in subscriptions resulting from increased value in journalism to respond to today’s politics) has accelerated the shift to serving audiences. We think the $115 million Canadians already pay for digital news will grow to $345 million in a decade as the digital sector matures and supply of media products increases.

I am more hopeful about the future of journalism than I have been in my whole career. Media across Canada and around the globe realigning to serve audiences, instead of advertisers. A diverse ecosystem of many outlets serving specific needs of communities seems possible. The future of media will be people-powered — and profitable.

Profitable digital media outlets will emerge in Canada, and Discourse intends to be one of them. In spring 2018, we are going national by launching a revamped digital product offering the highest-quality investigative journalism to Canadians. Our new technology will enable our members to partner with a cross-country network of investigative journalists, and to be part of making an impact by taking action on issues that matter most to them.

Already we’ve shown that community-based investigative journalism can generate revenue, and we are on track to reach almost $1 million in annual revenue in 2017. We will continue to grow existing revenue streams and the big shift will come in spring 2018, when we launch a membership model that will drive our national growth. The goal: 20 investigative units and 30,000 paid members by 2020. We will create value for our shareholders — both in profit and impact — and aim to be a global leader in digital news media engagement.

To accomplish this, we are raising $1 million in growth capital. With a total of $446,000 already in the bank or pledged, we are well on our way. We want you to join us. We believe media companies that exist to serve Canadians should be owned by them. That’s why we are inviting all Canadians to become owners through a crowd equity funding campaign, a first for a media company in Canada.

Canada needs examples of successful, scalable media startups to demonstrate to would-be media entrepreneurs that it’s possible, and to make the business case to investors that it’s an exciting time to invest in the next generation of media makers. It’s time to stop reminiscing about the past and start imagining, building and investing in the future.

With a minimum investment of $250, you can have a ringside seat at one of the most exciting developments in Canadian media for a long time by becoming a shareholder in Discourse. We have made this as accessible as possible because we want a diverse community of owners to help us succeed, and to share in the benefits of our shared success.