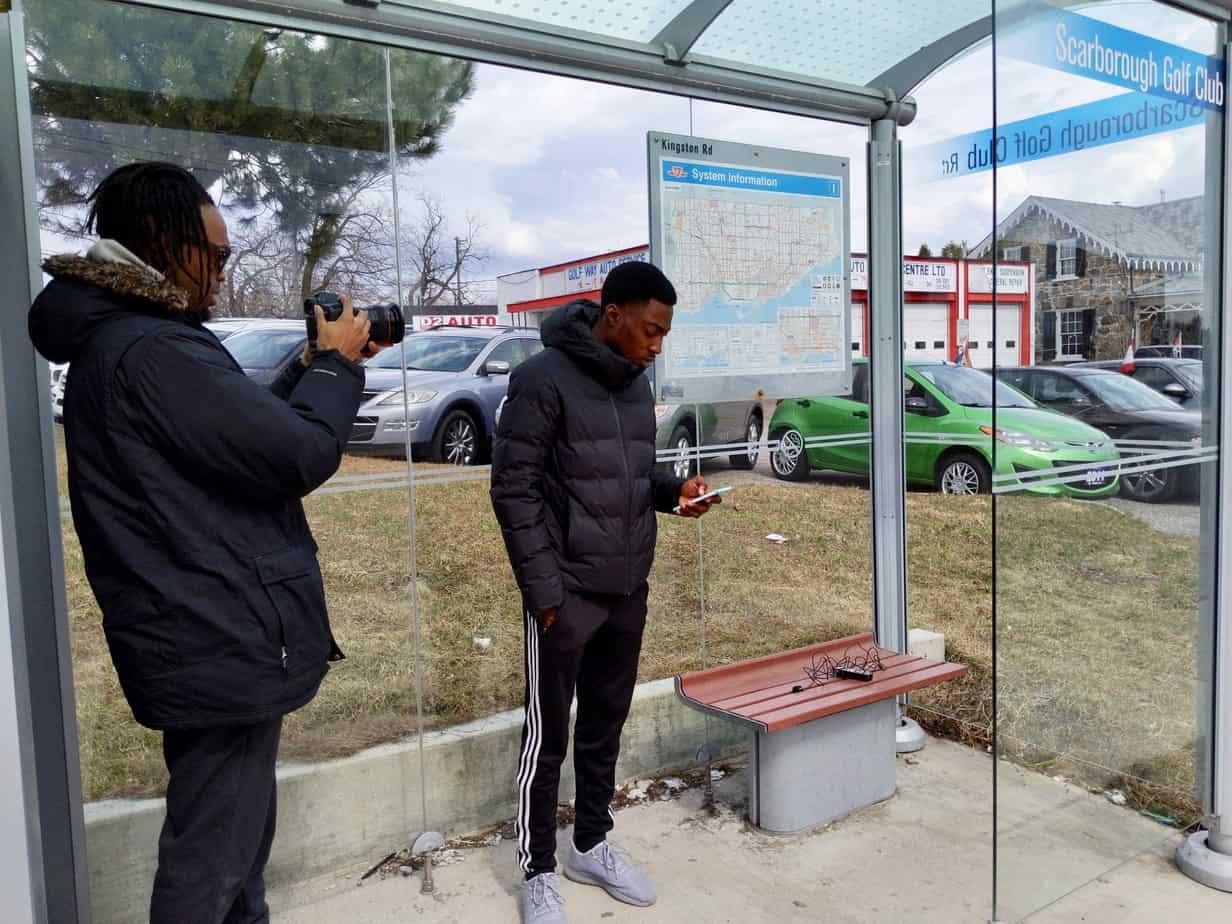 Behind the scenes: Videographer Paul Ohonsi (left) shooting Michael Manu (right) while he waits for the bus in Scarborough. Aparita Bhandari/The Discourse
Scarborough

Look out for our video about lengthy commutes, as well as other stories on transit deserts and overcrowded bus routes in the coming weeks.
Aparita Bhandari
Support this work. Tell a friend.

I hope everyone is taking some time off this long weekend. For those of you who observe Easter or Passover, it’s a time to reflect on themes of rebirth and renewal, as you gather with your congregations. For others, spring can offer similar opportunities for reflection. I’m delighted, for example, to see buds appear on bare branches, and to hear birds in the morning as I drop my kids off at school.

The daily ritual of school drop-offs can often involve public transit. While Michael Manu was attending high school in Scarborough, he frequently found himself arriving late to class because there was no direct bus route there. Now an urban planning student at Guelph University, he carpools across the Greater Toronto Area several times a week.

Michael and his daily commute is the subject of our upcoming transit-related video story. Last Friday, I spent time with him and Scarborough-based videographer Paul Ohonsi to shoot the video, which will highlight the transit challenges that Michael faces every day due to a lack of bus service along Kingston Road, outside of rush hour. On a blustery morning, it took us close to 45 minutes and a bus transfer just to get from one end of Kingston Road to another. Look out for this video and other stories about transit deserts and overcrowded bus routes in the coming weeks.

In other Scarborough transit-related news, a group of concerned citizens are planning to hold a peaceful demonstration on April 29 at the Metrolinx Stouffville corridor train tracks to shed light on traffic safety concerns along Huntingwood Avenue, between Finch and Sheppard Avenues.

Meanwhile, local parents will gather at the Scarborough Civic Centre on April 26 to develop a different campaign that they say will protect their children’s futures. This group is concerned about the “deep and harmful cuts” they anticipate to public education — a result of “efficiencies” announced by the Ontario government. These parents are planning a letter-writing drive, among other efforts.

I plan to attend both of these events, and report back to you. What are some community-based initiatives that you’re part of? What local issues would you like me to investigate? Email me your concerns.

Connie Jefford, 51, is an associate pastor at Warden Full Gospel Assembly. Connie enjoys her role because she gets to see the socioeconomic diversity of Scarborough through her church congregation and residents who live in the surrounding area. “On one street, you can have low-income housing; the next one, it’s really expensive homes,” she says.

Connie also loves the sense of community she sees in the work of local organizations, such as the Agincourt Community Services Association (ACSA). Besides running a community food bank, ACSA provides ESL, parenting and other classes. “They do all kinds of things to help people that are new to the country, or just need help,” she adds. “It’s free, which is good.”

With files from Kateryna Bandura

I received some impassioned responses from Scarborough Discourse community members to last week’s newsletter, in which I reported on a town hall about the Eglinton East LRT

Dave Hardy, executive director for the Institute for New Suburbanism, told me via email that the Ontario government should be congratulated for “adding the much-needed stops on the Scarborough subway” extension.

But another community member, Moya Beall, expressed anger over Tory’s comments at the town hall. “Tory has a lot of nerve advising Scarborough residents to do major lobbying of their MPs and MPPs for a project that he won’t make a priority,” she wrote in an email.

What’s your take? Send me your thoughts by replying to this email.

Earlier this month, Téa Mutonji published her first book, a collection of short stories titled Shut Up You’re Pretty, which is primarily set in the Scarborough native’s hometown. In fact, the suburb is more than just a setting — it’s “kind of a character,” Téa explains.

According to the poet and author, Shut Up You’re Pretty follows protagonist Loli as she navigates life in Scarborough from her childhood to her forties. “The one thing about Loli is that she’s constantly being boxed into these types of identity. She’s being told constantly who she is and she’s trying to fight against it. And then she gets tired, and then she kind of just starts to accept certain things. So you see her going through all that kind of transition,” Téa says.

“That’s how I look at Scarborough,” she adds. “[It’s] constantly being marginalized. Constantly being identified as something that it’s not necessarily.”

Shut Up You’re Pretty isn’t the only novel to feature Scarborough as its main setting. David Chariandy’s Brother, Carrianne Leung’s The Wondrous Woo, and Catherine Hernandez’s Scarborough have all added to conversation about this community through their writing. For Téa, these books tell the story of an evolving Scarborough over time, starting with Carrianne’s version of the suburb in the ‘80s through to the present day, which is when the other three authors’ novels take place.

“It’s the same setting, but through different timelines,” she explains. “David and I focused primarily on fighting against the violence that’s being shown in Scarborough. Then there’s me and Catherine…we were talking about the joy of living in a place and loving it regardless of the way the world looks at it.”

“As far as me and Carrianne, we both have that childhood innocence. These crazy things are happening and it’s cool, and we don’t really know what it’s all about, but we’re children, so we’re going to enjoy it.”

Téa is currently touring to promote Shut Up You’re Pretty, and will make an appearance at the Toronto International Festival of Authors on May 1.