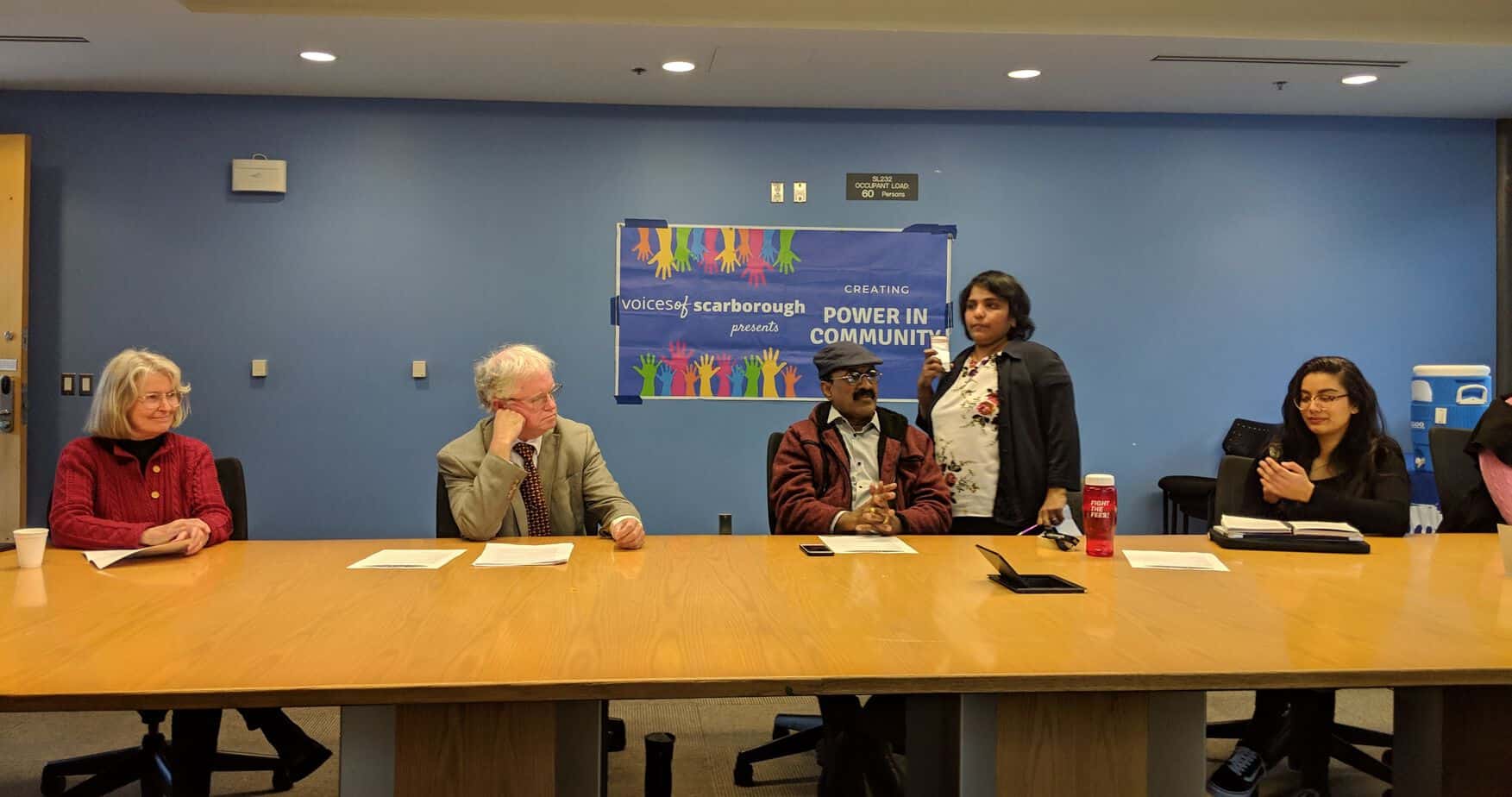 Solutions for the affordable housing crisis in Scarborough

On Monday, I attended a media event organized by Voices of Scarborough, an advocacy group made up of community members who are committed to advancing social change locally. The event’s purpose was to draw attention to the affordable housing crisis that’s affecting many Scarborough residents.

The featured speakers were Hana Syed, vice-president external of the Scarborough Campus Students’ Union; Ramalingam Sethu, a rooming house tenant; John Stapleton, a social policy consultant; and Joy Connelly, a member of local housing-advocacy group Power in Community. All of them argued in favour of legalizing rooming houses in Scarborough.

Sethu, who came to Canada as a refugee after fleeing civil war in Sri Lanka, described his experiences of living in Scarborough for 23 years. Sethu receives a pension of $1,400 per month, which he and his wife need to survive. Half of that money is spent on rent, he said, speaking in Tamil through a translator. “The councillors we have elected — they actually don’t know what we are going through on the ground,” he added. “I’m not sure if they are even worried about what we are going through.”

For student union member Syed, safety is among her main concerns, especially after Helen Guo, an 18-year-old international student, died in a rooming-house fire in Scarborough last year. Many students continue to live in unregulated rooming houses due to financial constraints and often aren’t aware of their rights, Syed explained, adding that they’re scared to report the abysmal conditions of their rentals. “This isn’t just about the ugliness of rooming houses,” she emphasized. “It’s about the safety of people in Scarborough. …This is a basic safety issue.”

Toronto Mayor John Tory’s latest affordable housing initiative doesn’t do enough to address the crisis, especially in Scarborough, Power in Community’s Connelly argued. According to Tory’s new “Housing Now” plan, fewer than 400 affordable homes will be available to Scarborough residents. “And only 45 of them will be deeply affordable. We need a Plan B, C and D,” Connelly said, adding that one immediate solution would be to legalize rooming houses. “It’s the lowest-hanging fruit.”

Legalizing unlicensed rooming houses also makes sense from a taxation point of view, he said, citing hospital funding (which is partly based on the number of people living in the neighbourhood) as an example. Scarborough’s total population is grossly undercounted because occupants in rooming houses don’t report their housing situations on the census, thereby resulting in underfunded healthcare, Stapleton explained. “Illegal rooming-house operators usually don’t pay income tax on the rent they collect,” he added. “If registered, they would have to pay income tax on rental profits.”

Connelly suggested that Scarborough can set an example for the rest of Toronto when it comes to affordable housing. “There’s great potential and great need. Policies that we set in Scarborough will benefit not just people of Scarborough, but the whole city,” she said.

Do you know of any rooming houses in your neighbourhood? Would you prefer they stay illegal or become regulated? How would you address the affordable housing crisis in Scarborough? Email me your thoughts.

Marvin Macaraig is the community health promoter and coordinator for Scarborough Cycles, a collaborative project dedicated to building bike culture in the suburbs. Launched in 2015, Scarborough Cycles is led by the Centre for Active Transportation in partnership with Access Alliance Multicultural Health and Community Services, as well as other grassroots organizations.

As a lifelong Scarborough resident, Marvin says he’s lucky to have a job that improves the spaces in which he works and lives. “Not everyone in Scarborough drives,” he explained, adding that there’s a growing population of cyclists in the community. “There are pockets of places in Scarborough that are amenable to change, open to more options of getting around. So it’s not just arterial roads and highways.”

Save the date! On Thursday, Feb. 28 from 6 to 9 p.m., Scarborough Discourse will host our second Story Circle. This time, we’re focusing on transit — an issue that’s top of mind right now, given the challenging weather conditions that’ve slowed down commutes over the past week.

But rather than having the same old subway versus LRT debate, our goal is to provide a space for community members to speak directly to city councillors about their daily transit-related concerns. We also want to hear from community members who may know of underreported solutions to Scarborough’s transit problems, as the suburb waits for rapid transit to arrive in 2025 (if that does indeed move forward). But there’ll be absolutely no talking points allowed — just tell us your lived experiences.

Child care will be available to a limited number of registered attendees on a first come, first served basis. Pizza and non-alcoholic drinks will also be provided. Please RSVP here.