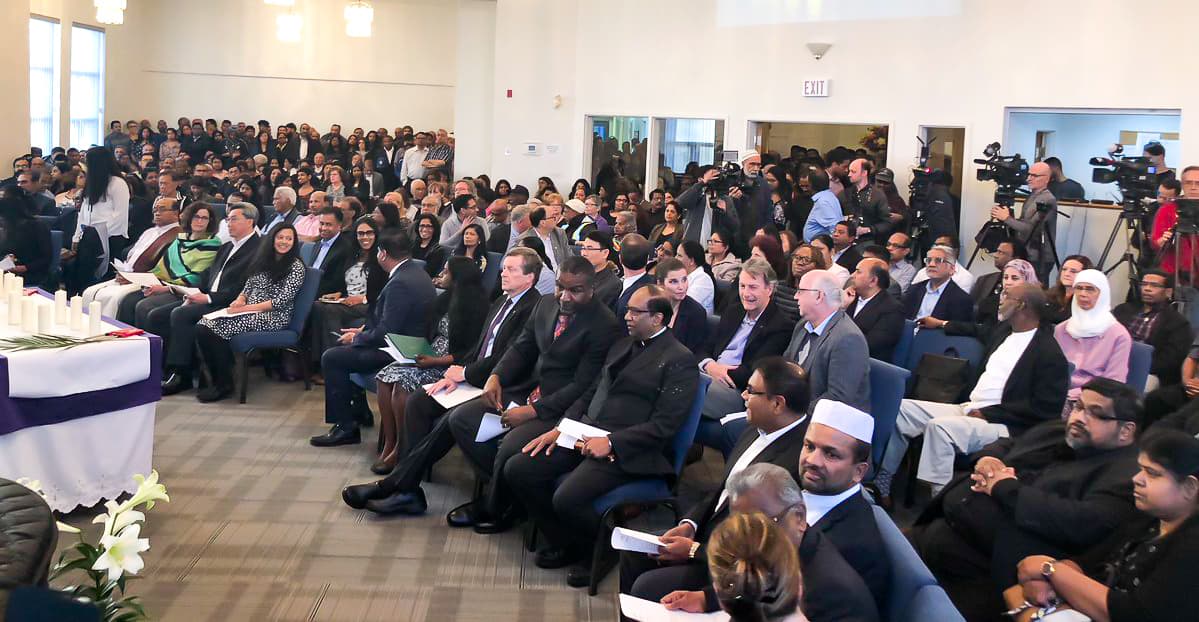 Scarborough community members gathered at the Malvern Methodist Church for an interfaith vigil for the victims of the Sri Lanka attacks. Keerthana Rang/Twitter
Scarborough

Scarborough is home to a large Sri Lankan diaspora that’s reeling from news of the bombings in Colombo, Negombo and Batticaloa.
Aparita Bhandari
Support this work. Tell a friend.

Many of us awoke last weekend to tragic news from Sri Lanka. A series of coordinated bombings, which targeted Christians praying at churches, as well as tourists vacationing in luxury hotels, took place on Easter Sunday in the cities of Colombo, Negombo and Batticaloa. More than 350 people died in what’s said to be one of the world’s worst terror attacks after 9/11.

Toronto is home to more than 100,000 Sri Lankan immigrants, according to the 2016 Canadian census, many of whom live in Scarborough. As an arts reporter, I’ve had several opportunities to interview members of this community, while pursuing stories that ranged from a profile of Toronto-based group Tamil Literary Garden to an investigation into the lives of Sri Lankan refugees who arrived on Canadian shores via MV Ocean Lady. I also have many friends in this community who’ve shared how the trauma of a civil war that lasted almost three decades, before coming to a brutal end in May 2009, has impacted their loved ones for generations.

The history of racial and religious tensions in Sri Lanka further complicate the tragedy on Easter Sunday. The civil war that ravaged the island nation has primarily been between the Sinhala majority and Tamil minorities. Religion also plays a part in the tensions, with the predominantly Buddhist Sinhalese majority clashing with the largely Hindu Tamil minority.

Given the large Sri Lankan diaspora in Scarborough, and the many barriers that racialized communities face when trying to access mental health and other support services, I began wondering about the resources that this community could leverage during their time of grief.

Earlier this week, I read a Facebook post by Scarborough resident Cheyanne Ratnam. In it, she talked about her direct connection to the tragedy in Sri Lanka. After hearing about the attacks in the news Sunday morning, Cheyanne, like many others, jumped on social media to find out whether her family in Sri Lanka was safe. But the country had instituted a temporary ban on social media after the bombings to stop fake news from spreading. Cheyanne was especially worried about her paternal family who lives close to St. Anthony’s shrine, one of the targets. As it turns out, her family had skipped the church’s Easter Sunday morning mass, although an extended family member died in the attacks and some others were injured.

“I had fear because this brought back of some of the things I witnessed in terms of PTSD of people around me in terms of their experiences of the war,” she told me over the phone. “For me, it was more like: Not again. This can’t happen again. Our people have gone through so much already. We can’t afford to have more trauma on top of all the other complex trauma that we all have collectively experienced.”

For the most part, Canada’s Sri Lankan diaspora relies on informal support, such as extended family, friends and faith-based groups, to deal with the trauma. Even if there are resources available through community organizations and the health care system in Scarborough, many people in the Sri Lankan community are unable to access these services due to language barriers and a lack of knowledge, says Thuvaaraha Ambalavanan, a placement student at Settlement Assistance and Family Support Services Scarborough.

“We currently do not offer mental health services. Our services are mainly family support for violence and abuse against women, and settlement services,” Thuvaaraha told me. “In my own experience, there’s a lack of language-specific services, especially for elder people. Also, there’s still a taboo within the Tamil community in terms of talking about trauma, about how their pain would be perceived.”

“With our generation, we are starting to break with that idea. We talk about mental health. But the older generation deals with pain in different ways.”

It’s natural for support systems to evolve based on common cultural practices, Cheyanne said, adding that they can often form around shared activities, versus actively talking about trauma. “I know folks who get together to go to Woodside Theatre, and just watch Tamil movies together. It’s about being around people … who you can relate to and feel a sense of serenity amidst that chaotic life.”

Has news of tragedy in Sri Lanka affected you or your loved ones? Do you know of any community organizations that can offer support in your neighbourhood? Email me your thoughts and suggestions.

As the president of the Agincourt Village Community Association, Rhoda Potter is often on the frontlines of community organizing. Her latest effort is a demonstration slated to take place this Monday, April 29 at the Metrolinx Stouffville corridor train tracks, where protesters will shed light on traffic safety concerns along Huntingwood Avenue, between Finch and Sheppard Avenues.

There’s a strong sense of community in Agincourt, says Rhoda, a retired elementary school principal. “We welcome new people, diverse cultures in our neighbourhoods,” she explains. “In the [2013] ice storm we went through, we helped each other, with the electricity being off and people needing rides.”

Scarborough residents need to work together to ensure they get access to services such as improved public transit, resources for people living in poverty and health services, according to Rhoda. “There’s a lack of community centres,” she says, adding that the fire at the Agincourt Community Centre has left a huge gap in her neighbourhood. “In other parts of Toronto, there are beautiful facilities, playgrounds. Even for our association to get a room for a general meeting, it can become very difficult to find space.”