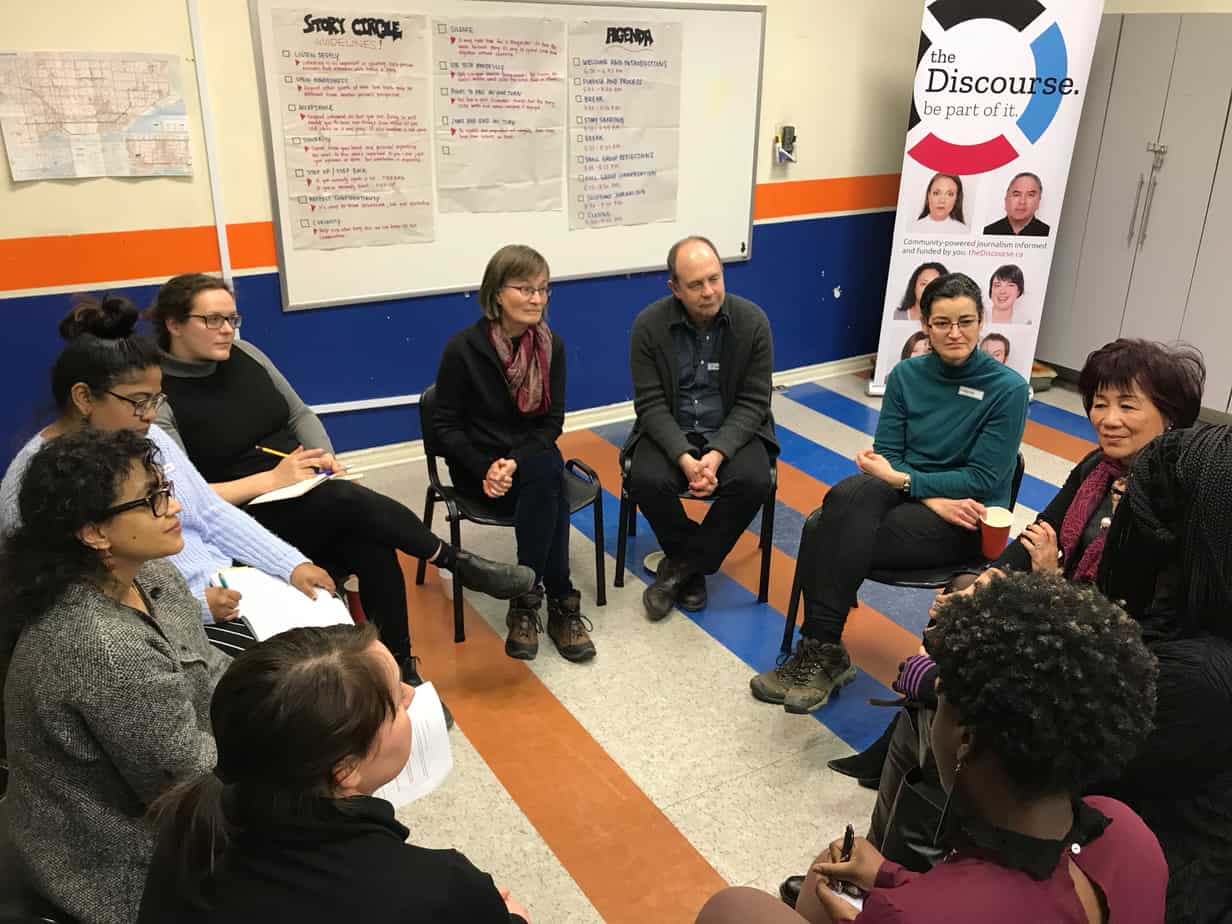 Community members shared their experiences with transit in Scarborough at a story circle listening event. Events like these inform our reporting. Trevon Smith/The Discourse
Scarborough

First of all, I want to thank everyone who expressed an interest in Scarborough Discourse’s second Story Circle: Transit edition — my colleague Anita Li and I are grateful for your support. We were delighted that many of you made it out to our event, braving the bitterly cold weather that’s become representative of what seems to be Toronto’s never-ending winter. It was especially lovely to meet so many of our community members in real life, after our frequent interactions via Facebook and email.

One of my major takeaways from this Story Circle was that many of you feel Scarborough residents are left out of transit policy-making conversations that almost exclusively take place at City Hall. Several attendees spoke passionately about the need for better community consultations that account for linguistic, economic and other barriers many locals face when sharing their views on public transit.

“The city can place employees to ride each bus [and] LRT line for the term of one year for eight hours a day, and measure for specific results,” Tessrah Baptiste wrote during our Story Circle’s solutions journaling period, during which attendees suggested solutions to transit issues in Scarborough. After analyzing the results and releasing a comprehensive report, she added, planners should be better positioned to “build transit for users based on those results.”

Tessrah also recommended empathy training for TTC employees. “That would make my experience happier in my everyday life. ‘Hello, how are you? Good morning!’ It’s a customer-service job. I’m tired of being stereotyped or racialized because of where I live,” she said.

The team and I are now planning coverage of Scarborough transit based on the conversations and suggestions that emerged from our Story Circle. If you have more ideas for navigating the public transit system in and around Scarborough, I’d love to hear from you. Email me your thoughts.

Leon Tsai, 19, is a student at the University of Toronto Scarborough. Leon, who immigrated from Taiwan seven years ago, also identifies as a trans woman, activist, educator and artist. “I came to Scarborough for university and I think in my two years here, I’ve been falling in love with Scarborough, as cheesy as that might sound,” she says.

However, Leon feels that the local LGBTQIA+ community and culture isn’t as prominent as it is in downtown Toronto. “Let’s do better [when it comes to] ways of how we connect here. Because it’s not accessible to say, ‘Oh, you want people to understand you? Go downtown to the Village.’”

With files from Kateryna Bandura

Discourse in the news

Our very own Anita Li appeared on this CBC panel to discuss some media outlets’ irresponsible reporting of an alleged hate crime that was committed against actor Jussie Smollett when news of the incident first broke. “There was a lack of fact-checking, there was an almost knee-jerk willingness to feed into a really polarizing narrative without corroborating the facts,” she said.

Media coverage continues to be irresponsible now, with some outlets treating Smollett as if he’s already been convicted, though he’s only been charged with disorderly conduct for filing a false police report.

Anita also recently appeared on TVO as part of a panel discussion about the future of Canadian media and digital disruption. She described how The Discourse’s community-driven approach to reporting is filling in coverage gaps in underserved communities like Scarborough.