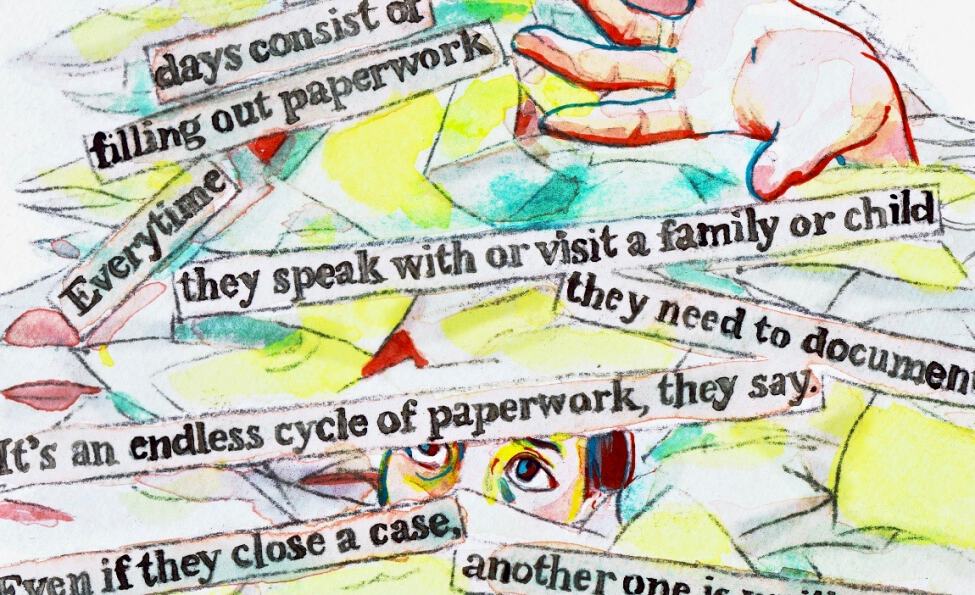 An illustrated look at a day in the life of a child-protection worker.

Social workers entrusted with protecting kids in B.C. are often on the front lines of some of society’s stickiest, most deeply entrenched problems: poverty, addiction and, for many Indigenous families whose children remain grossly overrepresented in the child-welfare system, intergenerational trauma wrought by decades of racist, colonial policies.

But a recent investigation by the collaborative journalism project Spotlight: Child Welfare found that many of these social workers are failing to meet basic requirements for kids’ care in B.C.

Data from the Ministry of Children and Family Development’s own performance audits shows that social workers aren’t assessing potentially urgent calls for protection quickly enough, completing safety assessments on time, nor sufficiently monitoring the well-being of kids placed in foster or adoptive homes.

Overall, the ministry gave itself a failing grade on nearly 40 per cent of its critical performance measures.

And while it may be tempting to blame social workers, research suggests we’re not properly resourcing these frontline workers.

She found that even Ministry of Children and Family Development offices with a full complement of social workers couldn’t keep up with workloads, due to the increasing complexity of the work. “The problems are systemic and have accumulated over time, worsening and not improving,” the report found.

“Funding for each DAA in the province is negotiated on a one-off regional basis,” leading to inconsistency, Richard found. According to his report, funding constraints mean that DAA social workers are often paid less than their counterparts at ministry offices — compounding the issues of recruitment and retention.

“DAA child protection staff interviewed as part of this review reported carrying an average of 30 cases at a time,” Richard found, noting that’s 50 per cent more cases than the guidelines recommend. In 2014, the union representing B.C.’s frontline social workers found that burnout, stress and fatigue rates in the ministry are “significantly higher than the rest of B.C.’s public service.”

And according to the social workers who’ve shared their perspectives with the Spotlight: Child Welfare team — via Facebook messages, emails, phone calls and this survey — not much has changed.

We asked “Jamie” — a child protection social worker whose identity we agreed to protect as she fears losing her job for speaking out — what it’s like to work in B.C. today.

Here’s what she told us (as illustrated by Miriam Libicki):

This story was produced as part of Spotlight: Child Welfare, a collaborative journalism project that aims to deepen reporting on B.C.’s child-welfare system. It was edited by Robin Perelle. Brittany Hobson contributed research. Tell us what you think about the story.