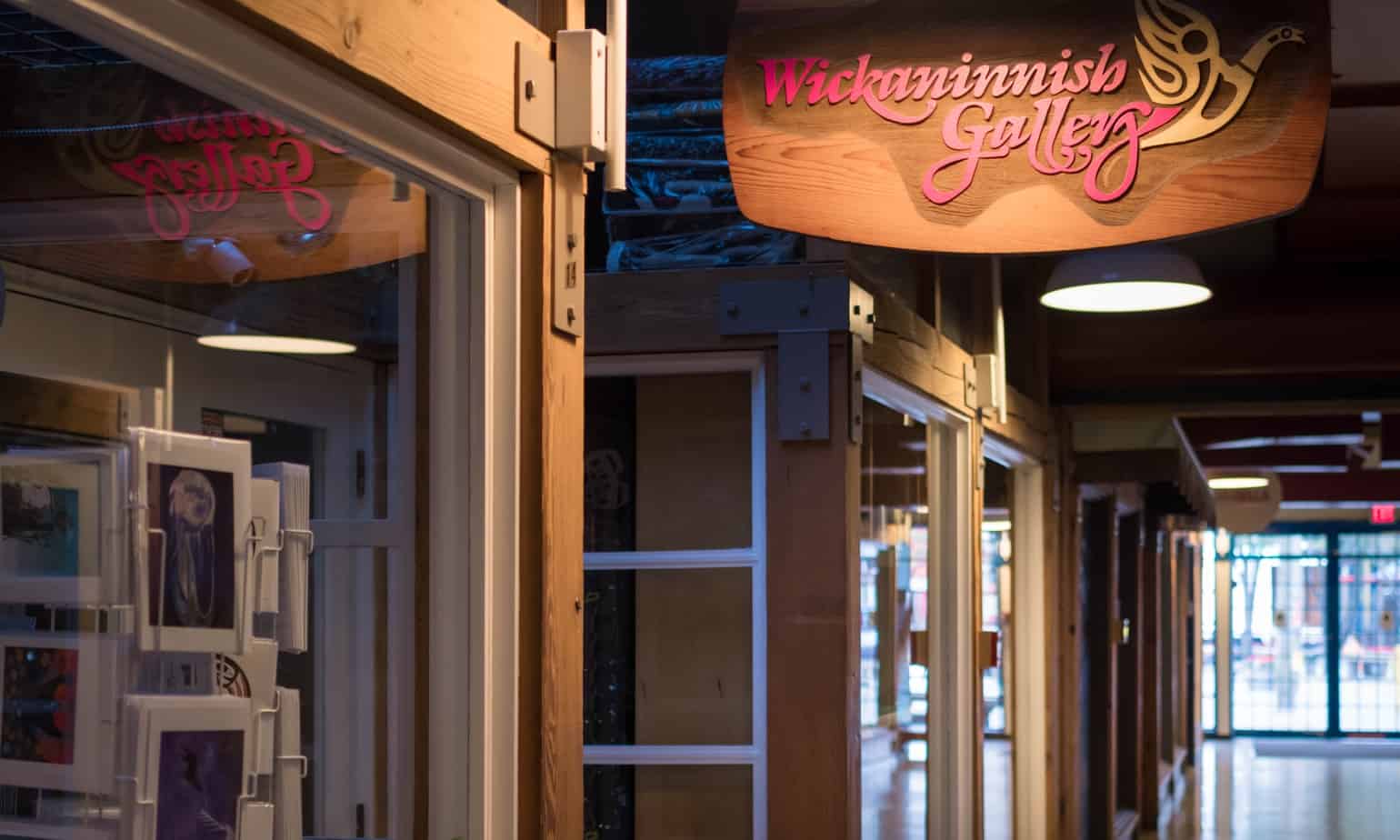 The Wickaninnish Gallery, which sold nearly all authentic Indigenous items when we visited it in February, is one of four stores in Vancouver that is updating its inventory after The Discourse investigation. Wawmeesh Hamilton/The Discourse
Urban Nation

Indigenous artists ‘should have their royalties,’ says one store owner who says she’s committed to selling authentic items.
Francesca Fionda and Robin Perelle
Support this work. Tell a friend.

Four stores have decided to change what they sell, after an investigation by The Discourse found three quarters of Vancouver shops appear to be selling some inauthentic Indigenous-themed items, produced without collaboration with Indigenous people.

The Discourse spent five months investigating 40 souvenir-selling shops in Vancouver’s tourist hotspots, such as Gastown, Robson Street, Chinatown and Granville Island. In each shop, we examined a sample of their Indigenous-themed items and asked staff if they could name the products’ artists or nations of origin. In all, we catalogued more than 260 items, then traced as many of their origins as we could find.

The result: only 25 per cent of the stores we checked exclusively sold authentic items — items that we confirmed were produced by or in collaboration with Indigenous artists, who were credited and compensated for their work.

Since our investigation was published, we’ve heard from Indigenous artists across the country who say fake art is a real problem that both violates the essence of authentic Indigenous art and harms Indigenous artists trying to make a living.  Now, 13 per cent of the stores we checked that sold some inauthentic souvenirs have told The Discourse they are committed to removing or “phasing out” items our research found to be inauthentic.

“I asked my manager to remove those items from our stock,” Inukshuk Gallery owner Erla Boyer told The Discourse in an email on May 17, after we sent her our findings for response.

Our sample from the Inukshuk Gallery found both authentic Indigenous items, as well as items whose authenticity we were not able to verify. We also found some copper jewelry from a company whose non-Indigenous designer once worked with Indigenous jewelry makers but who now designs his own pieces without collaboration.

Boyer says she called two of her suppliers after our investigation, and confirmed our findings.

“That material is in the process of being returned,” she told The Discourse in a follow-up phone interview, “because I want to have integrity about this.”

Boyer says she was surprised to hear that some of her suppliers, whom she’s known and trusted for years, were not paying Indigenous artists royalties on all their products.

In her email, Boyer said she’s spent nearly 50 years showcasing Indigenous art in her three galleries in Vancouver and Ontario, and says their “welfare and fair treatment is constantly in my mind and heart.”

A few steps away, the Wickaninnish Gallery on Granville Island also told The Discourse they would be removing a line of moccasins that we looked into.

When we asked him if it would be correct to describe his products as authentic because some Huron First Nation people participate in their production, he said, “I don’t think so, no. I’m not sure.” It depends what counts as authentic, he said, noting that his shoes are not made on reserve.

“As an Indigenous-owned company, we too are concerned with authenticity,” a representative from the Wickaninnish Gallery wrote in an email to the Discourse on May 15, after we shared our findings. “Since we started in 1987, we have maintained our commitment to support Indigenous art and culture by carefully selecting the merchandise we have to maintain artistic and cultural integrity.”

“While Eugene Cloutier does employee Indigenous artisans and craftspeople for partial production of their moccasins,” the email continued, “we agree that the criteria for authenticity may not be met and will therefore be phasing out this line of moccasins.”

“When we originally decided to carry the Eugene Cloutier moccasins we inquired if there was Indigenous involvement in the production of the moccasins,” the gallery told The Discourse in a follow-up email on May 27.

“The company told us that Indigenous artisans and craftspeople from the Huron-Wendat Nation beaded and laced the moccasins. After reading your findings, we agree that they do not meet the criteria and even requested from Eugene Cloutier that the moccasins be completely Indigenous made. Unfortunately, they were unable to accommodate our request and we have therefore discounted and discontinued all moccasins by Eugene Cloutier,” the gallery wrote.

Over in Gastown, a representative from Michelle’s two gift store locations on Water Street told us in an email that they too planned to change what they sell based on what they learned through our reporting. They plan to remove a line of dreamcatchers produced by KC Gifts, whose co-owner told us during our investigation that they don’t collaborate with Indigenous people in the production of their goods.

“We were unaware that items from KC are not authentic,” the representative from Michelle’s wrote. “In fact, if you’re able to let us know the item you are referring to, we would definitely stop selling the item in our locations.”

“We do not produce any items for our store,” the representative noted; “we purchase all of our items from suppliers.”

Our goal for this investigation was to simply understand to what extent fake art is a problem in Vancouver stores. Many of the artists we interviewed in the last several months, as well as staff at stores committed to selling authentic pieces, say educating the public about what’s authentic — and why that matters — is key.

People need to learn how to recognize authentic pieces and support Indigenous artists and the genuine cultural expressions they share, they say.

This story is part of a series on fake Indigenous art in the tourism industry. It was edited by Robin Perelle.