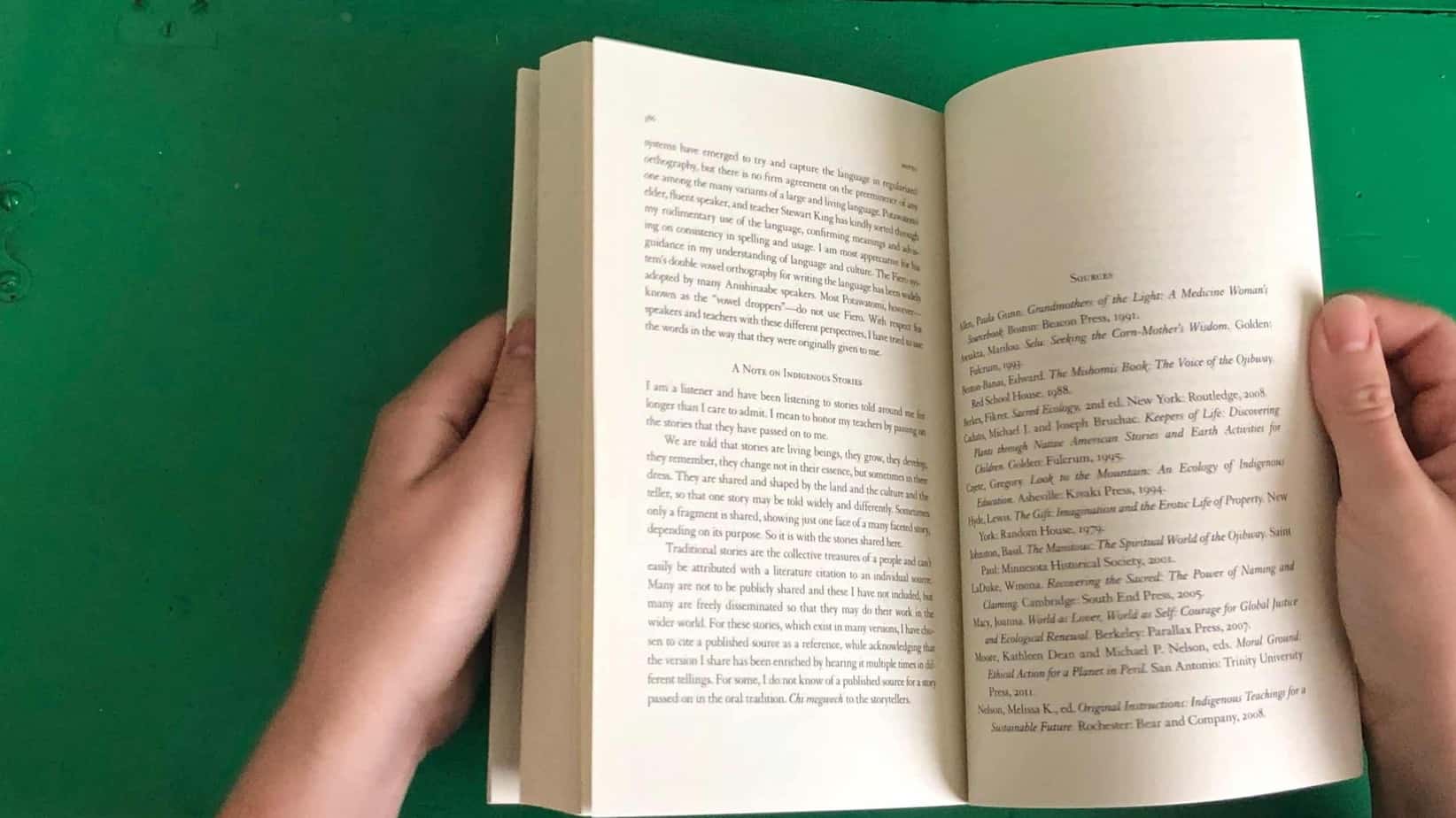 A note at the end of Braiding Sweetgrass by Robin Wall Kimmerer. Though Kimmerer is not a member of a First Nation on the Pacific Coast, this final note contains valuable insight on the significance of storytelling. Photo by Bayleigh Marelj.
Vancouver Island

As a reporter, I love reading stories just as much as I love telling them. As a storyteller, I know how important it is for Indigenous stories to be read and valued. In preparation for the back-to-school season, I have gathered a list of books that tell meaningful stories.

All of those shared in this curated list are by First Nations authors from the Salish Sea and broader Pacific Coast region. Though I am based on Vancouver Island, I have chosen the broader coastal region. This is in acknowledgement of both the fact that First Nations’ territories are not bound by colonial borders as well as in acknowledgement that this landscape has influenced coastal cultures and vice versa.

This list is only a small sample of the fantastic writing that has been created by the First Nations Peoples of the Pacific Coast. They range from charming children’s tales to cultural teachings to memoir.

All of those books listed are available at the Vancouver Island Regional Library and various retailers.

I hope you find your new favourite book or, at least, your next rainy day read.

Orca Chief tells the story of four fishermen from the Tsimshian village of Kitkatla who, thousands of years ago, make a grievous mistake when they carelessly drop their anchor overboard. The Orca Chief sends for the men, and they beg for his forgiveness. He then sends them out with his pod to teach the men how to harvest sustainably.

The third collaboration between Budd and Vickers following 2013’s Raven Brings the Light and 2014’s Cloudwalker, Orca Chief was first told to Vickers by an Elder in his great-grandmother’s family.

Secret of the Dance, by Andrea Spalding and Alfred Scow, illustrated by Darlene Gait

Based on a true story from the late Elder Alfred Scow of Kwicksutaineuk First Nation, Secret of the Dance tells the tale of a young boy’s experience as a witness to a secret and illegal potlatch in 1935. Scow himself snuck in to an illegal potlatch as a child and he based the story on his own experience.

He was not allowed to attend the 1935 potlatch, a memorial for his grandfather, because if they were caught he would be removed from his parents’ custody. The Canadian government made the potlatch and other Indigenous ceremonies illegal in 1885, and it stayed that way until 1951.

In 1922, Scow’s grandfather, Chief John Scow, went to prison for attending a potlatch. Though fictional, the book ends on a historical note: “Alfred’s grandfather Chief John Scow and two brothers served time in prison rather than give up the family’s masks and regalia.”

The Sasquatch, the Fire and the Cedar Baskets, by Joseph Dandurand, illustrated by Simon Daniel James

Published this June by Kwantlen storyteller Joseph Dandurand, The Sasquatch, the Fire and the Cedar Baskets begins as the story of the solitary life of a young sasquatch, the spirit of the great cedar forest. Having been separated from his parents because of a forest fire, the sasquatch lives alone – until he falls in love. When the fire threatens his family again, he saves them by using water stored in his partner’s cedar baskets.

Haida storyteller, singer and drummer Kung Jaadee shares the story of Raven’s creation of the world. He makes the forests, the oceans and the creatures that live within them. Lonely, Raven invites people from all over the world to a feast. When they depart, he gives each person a very special gift: their unique talents. Kung Jaadee’s writing encourages each reader to embrace their individual gifts and talents.

Legends and Teachings of Xeel’s, the Creator, by Dr. Ellen Rice White – Kwulasulwut

The late Dr. Ellen Rice White’s (Kwulasulwut) final publication, Legends and Teachings of Xeel’s, the Creator, is comprised of four short stories: “The Creator and the Flea Lady,” “The Boy Who Became a Killer Whale,” “The Sockeye That Became a Rainbow” and “The Marriage of the Seagull and the Crow.” In the spirit of encouraging cultural context, each story includes discussion from White herself.

A celebrated Snuneymuxw Elder, educator and healer, each story was handed down to White from her grandparents and ancestors.

Before her passing, White wrote one of the first English-Hulquminum dictionaries, served as an Elder-in-Residence at VIU, then known as Malaspina University-College, and was appointed into the Order of Canada in 2016.

Since Monkey Beach’s publication in 2001, Robinson has published several other books. Notably, Son of a Trickster, which was adapted into the television series Trickster, airing on CBC this fall.

Lucy Haché offers autobiographical prose with her first book, Clouds. Reflecting on her identity as a woman from the Gwa’sala-‘Nakwaxda’xw Nation with Métis and Scottish/Irish ancestry as well, according to At Bay Press, Haché meditates on “both her personal and ancestral relationship to the sea, forest and sky.”

Through natural imagery, Haché shows the reader herself, “as the downpour embraces me, I am content to just exist.”

Followed by the 2018 book Stars and the forthcoming Trees, Haché writes of the connection between the self and the landscape in her Overhead Series.

Told through the perspective of Mink, Celia’s Song tells the story of one Nuu-chah-nulth family over several generations. Mink, a shape-shifter, observes as the family deals with generational trauma brought on by colonialism. It is seer Celia who must – with the help of her family – heal her village.

People who are already familiar with Maracle’s work may recognize Celia, as she was also a character in Maracle’s earlier novel Ravensong.

Maracle is a Stó:lō storyteller, grandmother, educator and “one of Canada’s most prolific First Nations writers.”

This novel is also available in eBook format.

Editor’s note: Thank you to Patricia Massy of Massy Books for your recommendations.