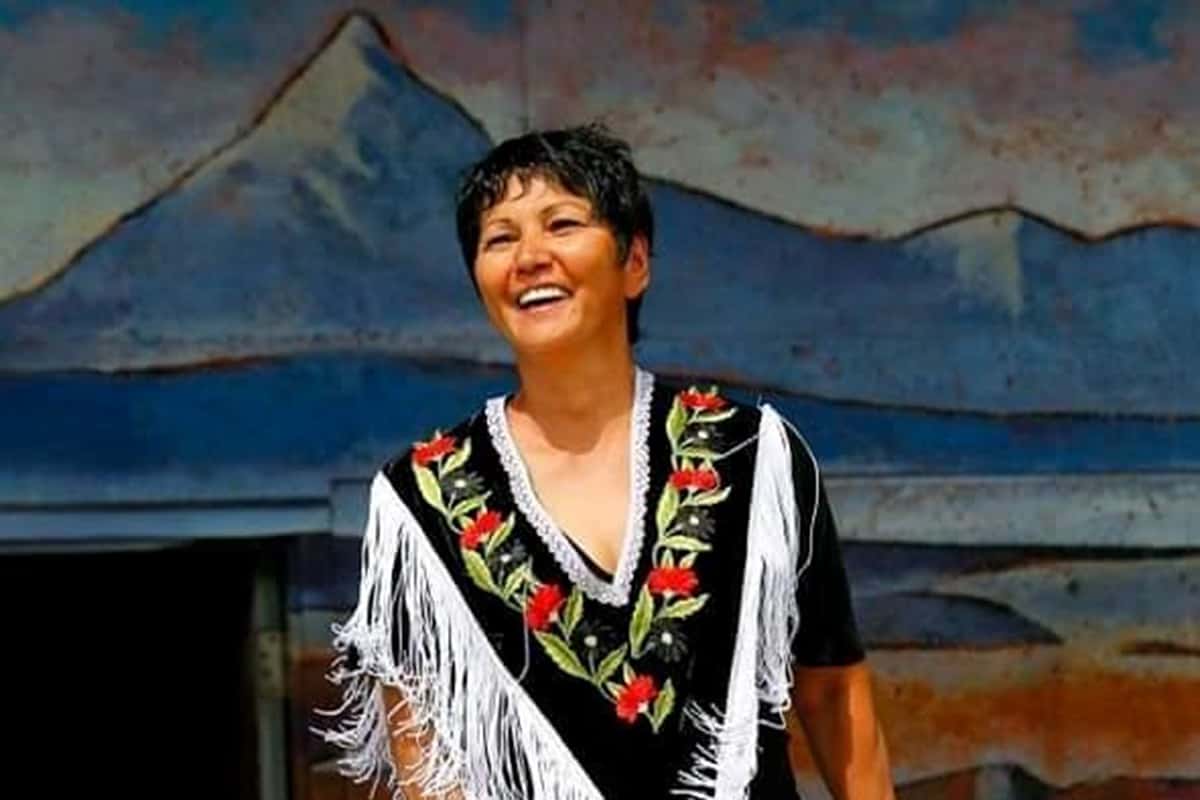 Beverly Lambert strives to teach Métis students to have pride in themselves and their culture through jigging.
Bayleigh Marelj, Local Journalism Initiative Reporter
Support this work. Tell a friend.

Beverly Lambert stands in front of her computer. Her white jigging shoes clack on her living-room floor. “Kick one-two-three, kick one-two-three,” she repeats to her students. This is their third day of online jigging classes, and they are being instructed via Zoom.

She is teaching them basic components of the Red River Jig as part of a week-long online series hosted by the Métis Nation of Greater Victoria.

According to the Virtual Museum of Canada, the Red River Jig is “the most famous Métis dance.” Though the true origin of the dance is debated, one thing is certain, the Red River Jig is “the centrepiece of Métis music.” Métis jigging is known to incorporate elements of First Nations powwow dancing and European styles, such as tap and Highland dance.

Raised in a small community surrounding Fort Vermilion, Alta., Lambert, who goes by Métis Bev, says she was brought up “grassroots” Métis. She says that she learned to jig as a child alongside her 18 siblings, and was taught by family members, Elders and others in her community.

“I was born with that spirit of dancing,” says Lambert. She says she credits her passion for dance to her ties with her ancestors.

When you are born and raised with it, there is “more of a cultural pride associated with the jigging,” says Lambert. “That was really powerful for me and my self-esteem.”

Lambert says she is hopeful that by instilling this same passion in her students, she can preserve traditional cultural knowledge and help them find pride in who they are.

“If I wasn’t missing this when I was young, this spiritual thing that everybody is seeking out there, then maybe I should give that gift to other kids.”

Lambert left her home community in 1977 and moved to B.C., where she spent time working in mines, sawmills and at a grocery store. It was almost 20 years before she started teaching dance. In 1996, Lambert says she was approached by the nearby Métis community group — which is now the Prince George Métis Community Association — after attending a community dance where she demonstrated the Red River Jig. They wanted her to help teach jigging to the community. She accepted.

After several months of teaching, her students performed for Elders at the local friendship centre in the Nechako Fraser Junction. In her website bio, she describes her feelings after her first students’ performance, saying that upon seeing the community’s enthusiasm, she knew in her heart that teaching jigging was her “destiny.”

Since then, she has performed and taught in towns throughout Canada, including Penticton, B.C., Hay River, N.W.T. and Fort McMurray, Alta.

When the COVID-19 pandemic began in March, she says she had to halt her nearly 25 years of consistent travel and start teaching classes over Zoom. Her latest series of classes, which are being given via Zoom, are hosted by the Métis Nation of Greater Victoria. This is a community she says she has had trouble making time for in the past.

“Many years ago, I started teaching in the community,” said Lambert. “Because of my travelling, it was very hard for me to go to some of these remote communities. … When they heard I was doing Zoom jigging, they thought, ‘Oh my God, this is the perfect opportunity.’”

When the Métis Nation of Greater Victoria announced on their community Facebook group that Lambert would be teaching Zoom classes, Métis Elder George Goulet commented that she “will get the kids involved big time and teach them in her happy, happy, happy way.”

Lambert says that she doesn’t adhere to the typical structure of a dance class. Beyond teaching steps, she says she works to foster emotional connections with her students.

“When they took us [to] residential school, they took that family bonding away. And that emotional structure,” says Lambert. “I need to learn how to read people. I need them to connect to their emotional needs and get into that moment.”

Since Lambert’s classes moved online, she says she has had to switch up her teaching style to help keep her students engaged. She does this by making sure her students don’t have to focus on one activity for too long.

To teach them more about their culture, Lambert’s lesson on Aug. 5 begins with a segment on traditional Métis clothing. Her living room couch is scattered with shawls, sashes and a handmade capote.

After the clothing segment, her two students for the day move to their living-room dance floor. Each student performs steps they learned in their lesson the day prior, including what Lambert calls the “baby step,” which is a bouncing movement, similar to a toddler in a Jolly Jumper.

Lambert’s lessons incorporate movements on what she calls the “circle of life,” which teaches children how to dance to “high” sounds. Students start by learning how to bounce like a baby along to fiddle music. She asks them to dance only when they hear “high” sounds, and to pause when they hear “low” sounds, which include more bass notes.

From there, the steps get more complicated as the class moves through the circle of life. Finally, they end up at the “Kookum step.” This is the Cree/Michif word for grandma, which is as simplistic as the baby step.

Each student is then scored by Lambert and their classmate in order to help them “let go of the fear of being judged.” Everyone holds their fingers up to present their score. The first student gets eight. The second student gets 10. It is time to move on to the “kick-one-two-three.”

Before the dancing resumes, Lambert sits at her screen. She makes a pulling motion with her hands as if grabbing things from her head. “Okay, grab it everybody, grab the bad words and throw it away!”

“I’m gonna have a good day,” Lambert says into the screen. “I’m special, I’m handsome.”  The students repeat the words back to her.

Lambert explains later that she makes a point of including positive affirmations in each lesson. She says she wants her young students to learn to have self-esteem, and that part of this comes with being proud of their culture.

During the lesson, one of the students crouches, watching the other dancer. “I’m bored,” he says. He walks off-screen as his classmate continues to bounce along to the music. After some coaxing from Lambert and a caregiver, he returns. Towards the end of the lesson, both students must give another performance.

Lambert switches on the music. Both students take their turns doing the “baby” step, as well as two “low” sound steps, which Lambert calls the “mummy” and “daddy” steps.

“The children’s mental state is very important,” says Lambert, reflecting on the lesson. “[I’m] teaching them how to keep themselves motivated through all these bad times.”

Editor’s note, Aug. 28, 2020: A previous version of this story stated that Lambert left her home community after graduating in 1977. Lambert left her community in 1977, but did not graduate. The story initially referred to the Medicine Wheel of Life, all references to this have been changed to the circle of life after clarification from Lambert, whose preferred professional name is “Métis Bev,” which has also been added. The story has been updated to reflect these changes.