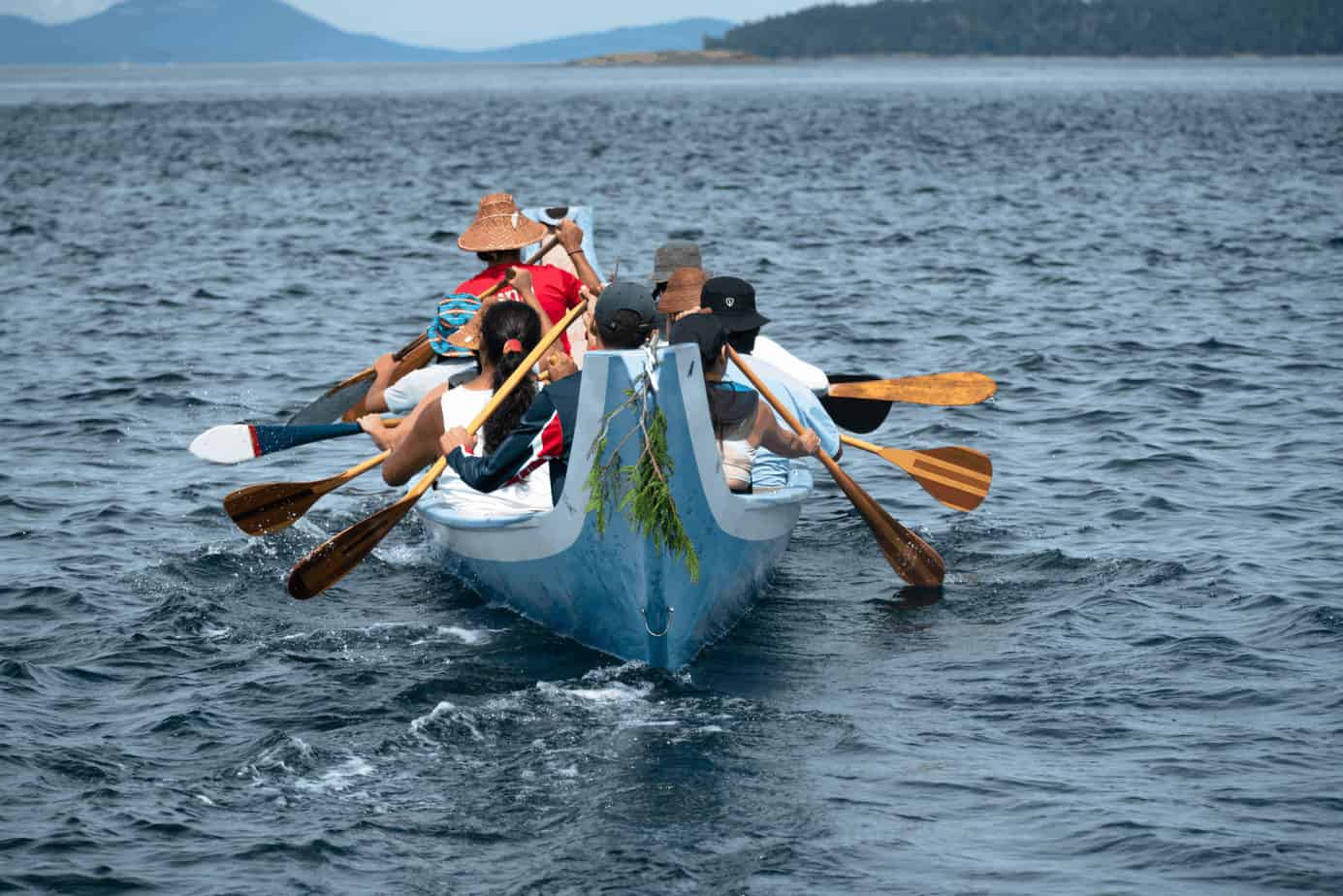 13 youth of the W̱SÁNEĆ Nation built and set a traditional reef net off of Pender Island in August, making it the second time in a century that the nation has laid a net.
Bayleigh Marelj, Local Journalism Initiative Reporter September 21, 2020
Support this work. Tell a friend.

On a bright day in August, 13 W̱SÁNEĆ youth paddled out from the shore in Sidney, B.C. in order to set a traditional reef net. It was the first reef net to be set by a group of youth in the last 100 years.

The youth, aged 17-26, spent seven weeks this summer researching, sourcing materials and building a culturally and historically accurate reef net. The project, they say, brought them closer to their community and their ancestors.

“It was really cool for me to be on a team where we were all learning together,” says Charles Claxton, 26, the son of the Tsawout First Nation Band’s chief.

The reef net, designed to catch salmon, is called SX̱OLE in SENĆOŦEN.

According to the book Saltwater People, as told by late W̱SÁNEĆ Elder David Elliot Sr., the use of SX̱OLE declined when the Canadian government outlawed it in 1916, because it was considered a “trap.”

In August, the youth suspended their net between two ocean going canoes near Pender Island, or SDAYES in the SENĆOŦEN language. The location is a traditional reef net site for some W̱SÁNEĆ families.

But, when they set the net, it got tangled. Although they were eventually able to set it straight, they had missed their window of opportunity, and ultimately didn’t catch any fish. However, the two-months spent reviving the once-outlawed fishing technology, has the youth invigorated.

“Even if we didn’t set it properly or catch fish… there’s still a lot that we can take from the entire program,” says Claxton.

Sarah Jim, 24, of Tseycum First Nation says that the process had an impact on her daily life.

“Throughout this process, everyone was bettering themselves, you know taking care of themselves a lot better,” she says. “I think that was important for a lot of people.”

The youth’s reef net is said to be one of only two built over the last century. The other was built in 2014 and it was documented by Chief Nicholas XEMŦOLTW Claxton of Tsawout First Nation as part of his Ph.D. thesis.

In the paper, Chief Claxton writes that “the SXOLE (Reef Net) is spiritual and sacred, as it was a gift from the Creator.” He also says in a video that the net was given to them by the salmon people.

Gordon Elliott, the Director of Operations for the W̱SÁNEĆ Leadership Council says the project was designed to transfer knowledge from Elders and other knowledge holders down to young people.

He says that the SX̱OLE has been used by the W̱SÁNEĆ for thousands of years, and emphasized the respect that the W̱SÁNEĆ have for salmon.

When the practice of reef net fishing was outlawed in Canada it had a profound effect on the W̱SÁNEĆ, explains Elliott.

“It really started to create an effect on our people,” he says. “There was not only division, [there was] a loss of culture and culture is really what helps to unite our people.”

The Lummi Nation in Washington, who are relatives of the W̱SÁNEĆ, shared this distinctive reef net technology, as well as fishing grounds, prior to colonial disruptions. In the 1852 Douglas treaties it was agreed that the W̱SÁNEĆ were at liberty to “carry on their fisheries as formerly.”

Landon Underwood, whose summer job was to coordinate the project, says it brought him closer to his community, after having spent the school year in Florida playing lacrosse at Kaiser University. Being back around his own people was “good medicine,” he says.

Underwood, of the Tsawout First Nation, was hired by the W̱SÁNEĆ Leadership Council and then tasked to hire other youth to help.

When he conducted interviews, Underwood says he asked them about their existing knowledge of canoeing and fishing. Although some had experience paddling, many had no experience with reef nets.

“Not a whole lot of them knew about reef net fishing,” he says.

Given this year’s success, Elliott says the council hopes to repeat the project with a new group of youth next year.

“I think from the perspective of the Leadership Council there’s a sense of relief there,” Elliott says. “The knowledge is being transferred down from Elders to youth.”

Jim says that before this summer, she hadn’t had much experience on the water

“Being W̱SÁNEĆ, you’re a saltwater person,” she says. “I feel a lot more connected to the ocean…the day that we paddled out I could not have felt more comfortable.”

The youth are already thinking of how they will pass the knowledge on to future generations.

Desiree Jones, who is the daughter of Randy Jones and Lori Prescott, of the Pauquachin First Nation, says she will pass the teachings onto her daughter.

“It was just a really beautiful experience and something that I’ll carry with me forever,” she says. “Hopefully that’s knowledge that I’ll be able to pass down to my daughter and future generations as well.”

After building the net, the youth paddled with the reef net to SDAYES and camped on the island. At night they sat around a fire, shared snacks and told stories.

Laila Morris, a youth from the Tsartlip First Nation says that the project not only taught her about her culture, but it also connected her to other youth.

“Throughout this project, we have become so much closer, learning about our culture and our history,” says Morris. “And also, growing to love each other, like we’re siblings, like we’re family.”

Because of this, Morris says she wasn’t bothered that they didn’t catch any fish.

“Although it didn’t go as planned…it was a learning experience for all of us as a team and as a community,” she says.

Underwood, who first brought the group together, says they have stayed connected, even though their work is done.

“Everyone’s always hanging out and it kind of just feels like a family now,” he says “It had a huge impact on me because I felt like I was missing out on quite a bit here at home when I was away.”

Alongside strengthening their bond with the ocean and each other, some of the youth say the project connected them to their ancestors and future generations.

Coming back from SDAYES, the youth used motorboats to tow their canoes. Morris, who sat in the canoes with some of her friends while they were being towed, says that during the journey home she and her friends had a “surreal moment.”

“There was a faint First Nations song that was being sung by a woman which was coming from the forest,” Morris says. “We believe that it was our ancestors’ way of telling us that they were there with us from the beginning.”