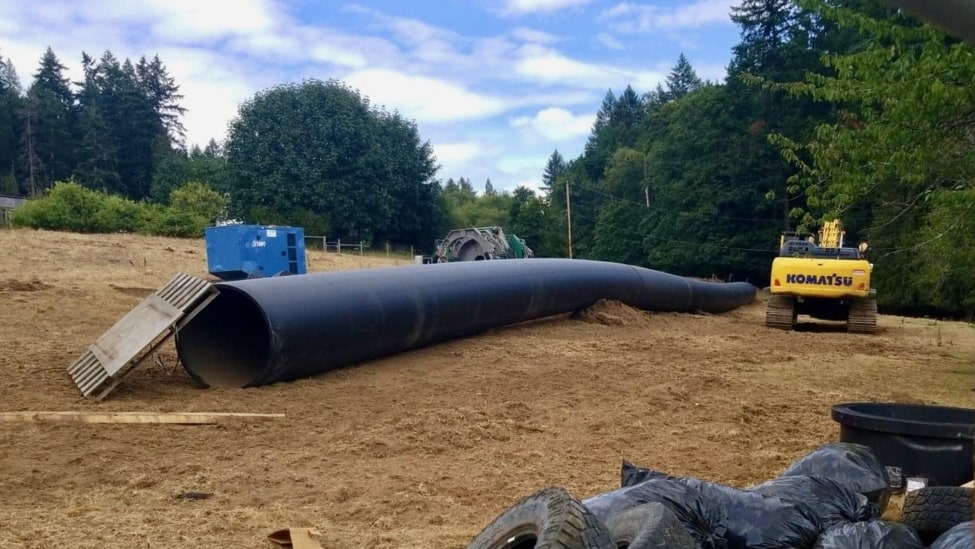 Catalyst Paper prepares to lay a section of new pipe. The company pumps water from the Cowichan River to supply its mill in Crofton.
Photo submitted by Matthew Kinnunen

'We don't have any leaks. We have the risk of catastrophic failure' says environment manager.

My Curious In Cowichan newsletter is all about exploring your curiosity in the Cowichan Valley. So it thrilled me when two readers sent me questions about work that’s underway along Catalyst’s water pipeline. The pipeline takes water from the Cowichan River by Cliffs Road near Duncan, and delivers it to the Catalyst Paper mill in Crofton.

Recently, the company has been laying a new section of pipe, close to Richards Trail. Matthew Kinnunen and Dave Mason alerted me to this and sent pictures of what’s going on.

Matthew, Dave and others are very curious about this construction project, and for good reason. Catalyst is the largest water user in the Cowichan watershed, which is facing record drought. And the company pumps enough water to fill an Olympic swimming pool every half hour.

I’ve heard speculation that the aging pipeline could be leaking significantly, feeding nearby lakes and wetlands. I wanted to get to the bottom of this, so I took your questions to Brian Houle, environment manager with Catalyst Paper. Here’s what he told me:

Is the pipeline leaking water into the environment?

“Absolutely not,” Brian tells me. He says he’s heard the speculation that the pipe is keeping areas near it wet. But those areas have always been wet, he says. “We don’t have any leaks. We have the risk of catastrophic failure.” The pipeline, he tells me, is at risk of bursting, but is not leaking.

The pipeline that brings water from the river to the mill is ageing, Brian tells me. In fact, twice in the last four years, sections of pipe have burst. These failures forced the mill to shut down for several days for repairs. When the pipes burst water couldn’t get to the town of Crofton and people there were forced to use an alternate water supply and boil water for days at a time. (North Cowichan has sinceconnected Crofton to a back-up water supply that won’t require residents to boil water if this happens again.)

What is the company doing about it?

The company spent about a million dollars to assess the condition of the pipeline, Brian says. They used a tool called a Smart PIG, or pipeline inspection gauge. These devices travel down pipes and use sensors to map the strength of the pipe. It found a stretch of pipe near Richards Trail in North Cowichan that is at risk of bursting.

Now, the company is laying new pipe, 40-inches in diameter, next to that section of old pipe, Brian tells me. If the old pipe breaks, the company will be able to quickly switch over to the new pipe. This will reduce down-time at the paper mill in Crofton. Alternatively, if the mill must shut down for some other reason, the company could use that opportunity to tie in the new pipe.

That’s all for this week. I hope these answers help.

If there’s something you’re curious about in Cowichan, you can tell me here. In the meantime, share this article with your friends and be sure to sign up to the Curious In Cowichan newsletter. You’ll get stories like this in your inbox, every Tuesday.