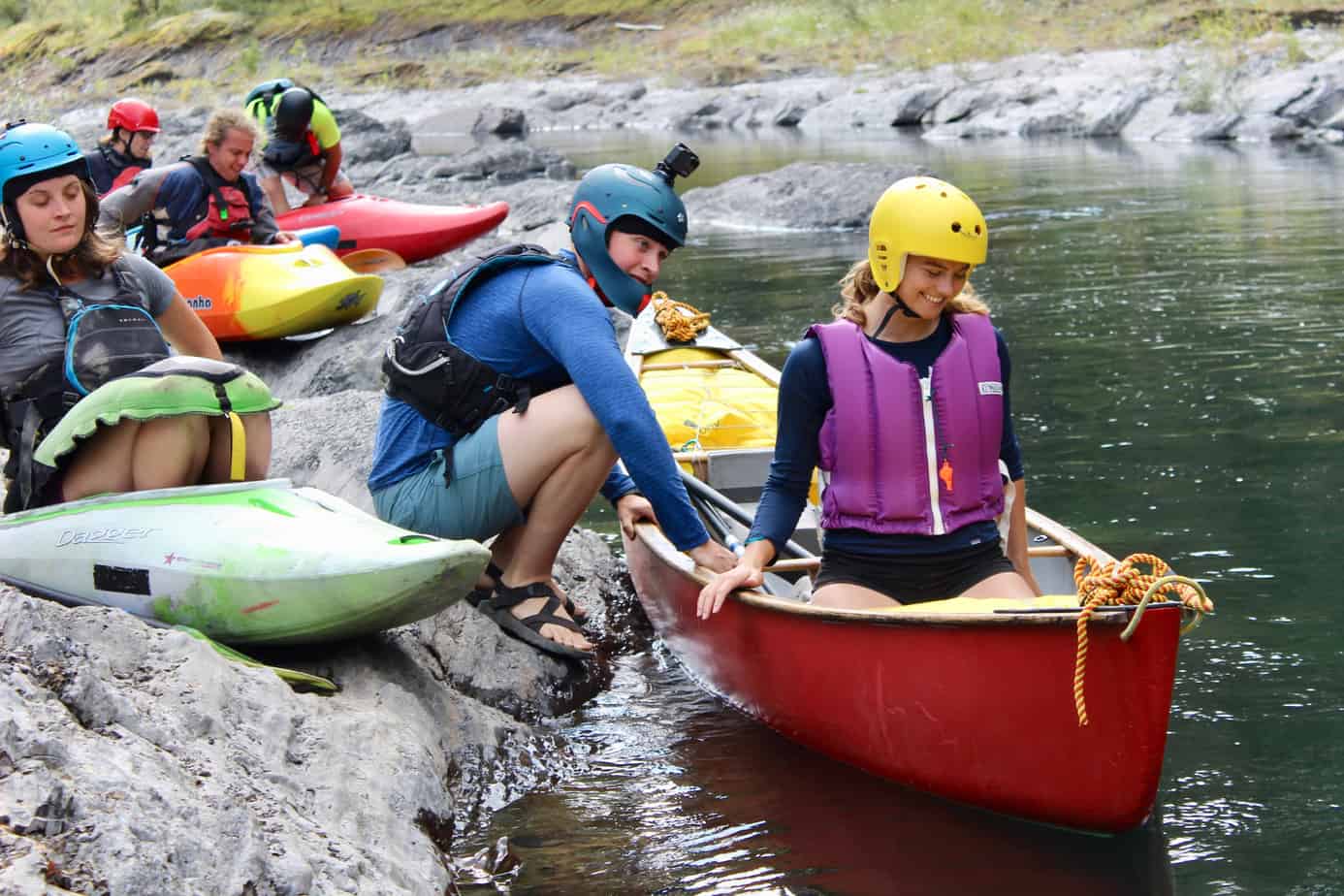 Paddlers set out on the Cowichan River below Skutz Falls as part of the annual river cleanup effort on Aug. 18, 2019. River flows are low, but not too low for a day of fun on the water.
Jacqueline Ronson/The Discourse
Cowichan Valley

Everything you need to know about drought, water restrictions and the Cowichan weir

What is going on with water in the Cowichan Valley this summer? Key questions, answered.
Jacqueline Ronson August 20, 2019
Support this work. Tell a friend.

So, you may have heard that the Cowichan Valley is in a drought. Which is a little weird, given the frequent sprinklings of rain we’ve seen this summer, unlike in recent years. Unfortunately, we’re still in a bad spot, water-wise. A few weeks ago, I asked what people wanted to know about the drought. And now, I’m back with some answers. Got more questions? Please send them my way!

Wait, Cowichan is in a drought?

Yes. It’s true that the summer has so far seemed cool and wet, at least compared with recent hot summers. But this past winter and spring were very dry. The little bits of rain over the past couple months haven’t been enough to recover from that. The 2019 Cowichan drought is the “worst in living memory.” For the first time ever, it will be necessary to pump water out of Cowichan Lake, causing lake levels to drop lower than they’ve already been. If not, the river would run dry, which would have very bad consequences for fish and the vast ecosystems that depend on them.

The neighbouring Koksilah River watershed is in bad shape, too. Without a big lake to draw from, consequences there could be worse than on the Cowichan. The B.C. government asked water users to voluntarily cut back in June this year. On Aug. 19, it banned using water from the Koksilah River for industry or forage crops, like hay and corn. The government made the move to protect fish that are under threat from the low flows.

What are the water restrictions where I live?

The Cowichan Valley Regional District posts current restrictions across the region, including Duncan, North Cowichan, Lake Cowichan and Ladysmith. Stage 1 water restrictions are in effect every year from May 1 through Oct. 31. Municipal governments can enact Stage 2 and 3 restrictions as required. If you’re on your own well, restrictions don’t apply. However, it’s always a good idea to try to cut back. What you pump out of your well can affect your neighbours’ water supply and nearby creeks and streams, too. If you have more questions about water restrictions, the Municipality of North Cowichan’s FAQ document may have some of the answers. 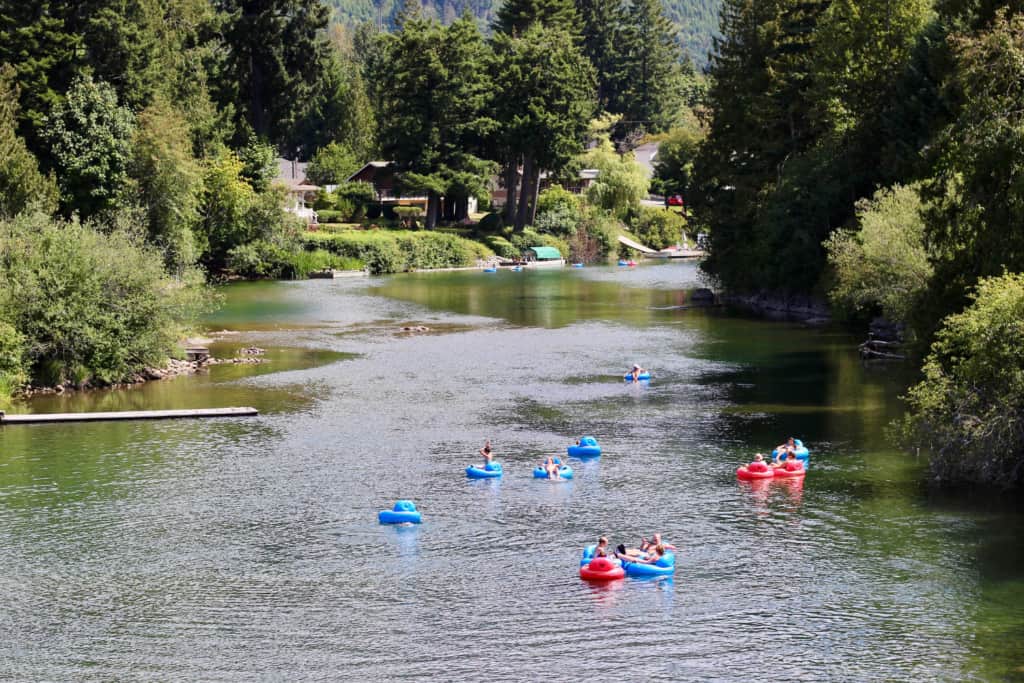 How will this affect my summer fun?

The main new impact this summer will be to boaters and waterfront property owners on Cowichan Lake. Paper Excellence, which owns the Catalyst paper mill in Crofton, expects to start pumping water out of the lake and into the river on August 29 or 30. From then on, the lake level will slowly drop to levels that haven’t been seen in millenia. Shoals and underwater objects that didn’t cause problems for boaters in the past may become problems. Some docks may become inaccessible. These issues won’t happen all at once. The lake level will drop at about two-thirds of a centimetre each day, or less if it rains, Paper Excellence staff said at a recent meeting in Lake Cowichan. The total drop could, in a worst-case scenario, be as much as 20 inches.

If tubing down the river is your thing, you’re unlikely to see much change. If all goes as planned, the river will continue to run at current flows for the rest of the summer. You can expect a gentle ride. You might, as if often the case, have to kick or paddle through lazier sections if you want to make good time.

Why is Catalyst allowed to pump water out of the lake?

Bear with me because this gets a bit complicated. It’s frankly a bit weird that a company that runs a paper mill in Crofton, 40 kilometres by road from the Town of Lake Cowichan, is controlling the flow of water out of Cowichan Lake and into the river. I did my best to read up on the history and current situation. I also sat down for a couple of hours with Tom Rutherford, executive director of the Cowichan Watershed Board. It’s Rutherford’s job to know what’s going on with Cowichan water, and he’s working closely with Paper Excellence and others on decisions related to the weir and water management. 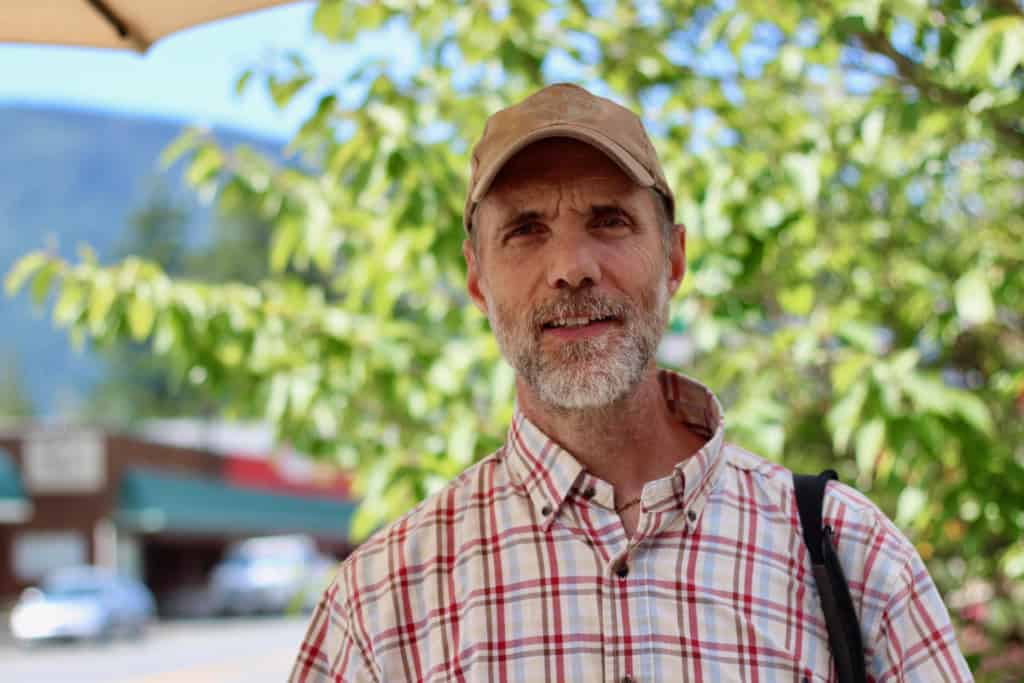 Tom Rutherford is the executive director of the Cowichan Watershed Board. He says building a higher weir is low-hanging fruit to deal with some of Cowichan’s water woes.
Jacqueline Ronson/The Discourse

The weir was built in the 1950s by BC Forest Products, and is currently owned and operated by Paper Excellence, which recently purchased the Catalyst paper mill in Crofton. It’s about a metre high, and it allows for some water in Cowichan Lake to be held back in the summer months and released in a controlled way into Cowichan Lake. BC Forest Products built the weir in order to make sure it had enough water to supply the Crofton mill through the dry season. But the provincial government sets the rules for how the weir can be used. One rule is that company must keep enough water flowing through the summer, not just for its own use, but for everyone else’s use, and to keep a healthy environment for fish.

Who is to blame?

It’s not Catalyst’s fault that there’s not enough water in Cowichan Lake this summer, or in other dry summers. Catalyst pumps water out of the river near Duncan, and this has no effect on lake levels or on river flows in the upper two thirds of the river. The problem is not enough snow in the winter and not enough rain in the spring and summer to keep the lake full. It’s mainly a climate change problem.

But Catalyst is still responsible for keeping water in the river flowing all summer long. Since there is not enough water behind the weir this year to do that, it will instead pump water out of the lake and over the weir. If it didn’t the river would run dry. That would be really bad, for all the people and animals that depend on the river.

The company does not make decisions on how to manage the river alone, but in collaboration with the provincial government and in consultation with Cowichan Tribes, the Cowichan Watershed Board and other groups. 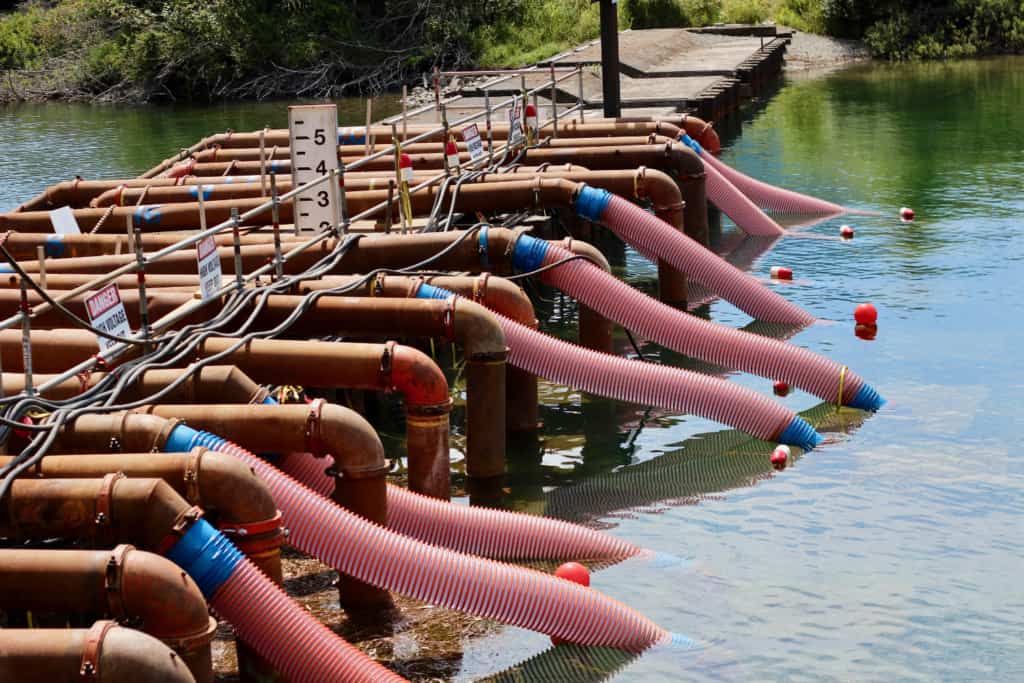 Paper Excellence Canada has installed pumps to move water out of Cowichan Lake and into the Cowichan River.
Jacqueline Ronson/The Discourse

Will the paper mill shut down to conserve water?

That’s not part of the plan.

The Crofton mill uses a lot of water. Like, a lot a lot. More than a million cubic metres per week on average in 2015. That’s about 15 times as much as City of Duncan (population about 5,000) uses for its municipal water.

There are, of course, environmental impacts of taking that water out of the river. At certain times a year there are fish waiting in the Cowichan Estuary for enough flow to begin their journey up the river. If they get stuck there, they’re easy targets for seals and sea lions.

But, as I said above, the mill pumps water out near Duncan, and this does not impact the lake or the upper parts of the river. Shutting down the mill would not solve the problem of not enough water in the lake. It would not remove the need for pumping water out of the lake to keep the river flowing.

Hopefully! The idea of raising the height of the weir to hold back more water has been around for more than a decade. The terrible situation this summer seems to have given the people involved a bit of a kick in the pants. Currently the Cowichan Valley Regional District, Paper Excellence, Cowichan Tribes and the Cowichan Watershed Board are working on a plan to replace the current weir with one about a metre higher. It’s complicated work but not impossible.

“I’ve got five bucks on the table saying five years,” Tom Rutherford, executive director of the Cowichan Watershed Board, recently told me. There are some big things that need to happen before the shovels hit the lake-bottom, he says: 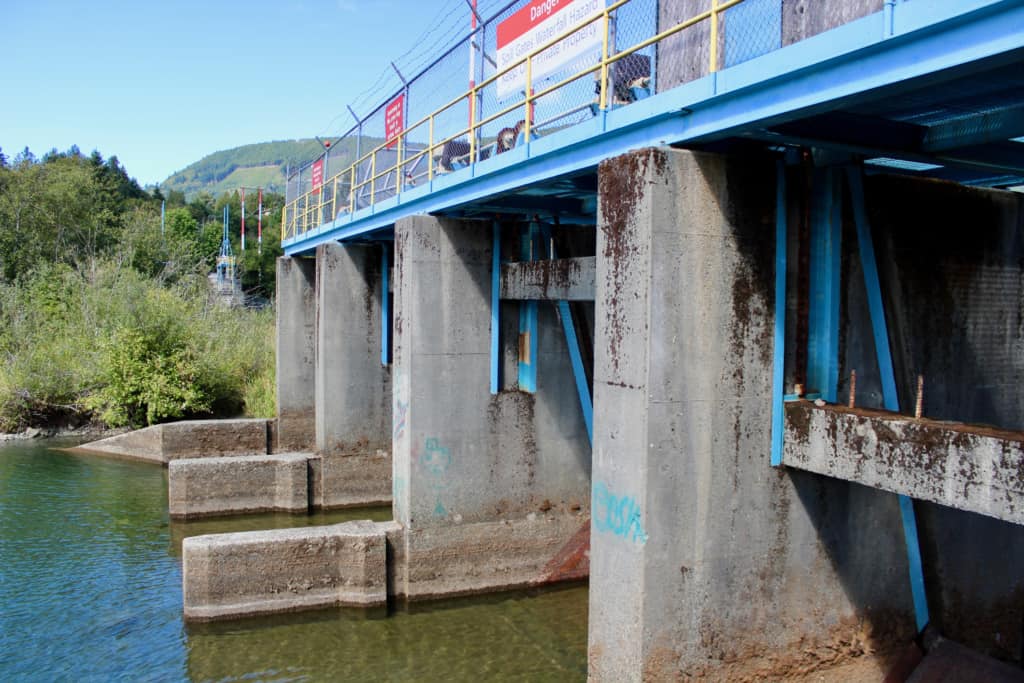 The Catalyst paper mill in Crofton, which owns the weir at Lake Cowichan, uses large hydraulic gates to control the flow of water into the Cowichan River.
Jacqueline Ronson/The Discourse

Who will pay for it?

“People smile when I say this, but usually in these big projects money is the least of our worries,” says Rutherford. It’s laying the groundwork that’s hardest. It’s the kind of thing that the province and the federal government are likely to find attractive, he says: “a climate change mitigation infrastructure project about water conservation that’s supporting the largest First Nation in British Columbia and all the rest of us.” The cost will be in the $10-15 million range, he said.

Then our problems are solved?

Well, no. “The weir, in this watershed, is low-hanging fruit, says Rutherford. “That’s where we can get the most bang for our buck.” But building a new weir doesn’t solve climate change, and it doesn’t change any of the other factors affecting watersheds: the forest industry, agriculture, urbanization, etc.

Other parts of this region don’t have the ability to store water, like the Cowichan watershed does. The Koksilah watershed is one example. There, building a weir isn’t possible, because there is no lake at the head of the river. Managing the drought there will take a lot more effort and cooperation. The Cowichan Watershed Board is working on it, Rutherford says. The hope is to develop a Water Sustainability Plan that would take into account all of the users of the water and the ways that human activity affects the water system. The plan would be legally enforceable, Rutherford says, and could be the first of its kind in British Columbia.

Correction: A previous version of this article said the cost of the weir would be in the hundreds of millions of dollars. In fact, it is expected to cost $10-15 million. (Aug. 21, 2019)

How to have a safe and spooky Halloween 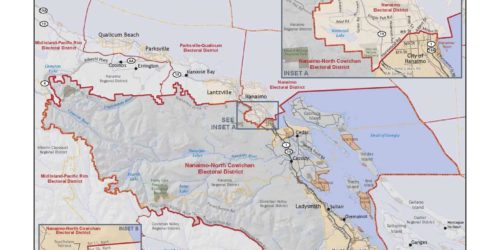