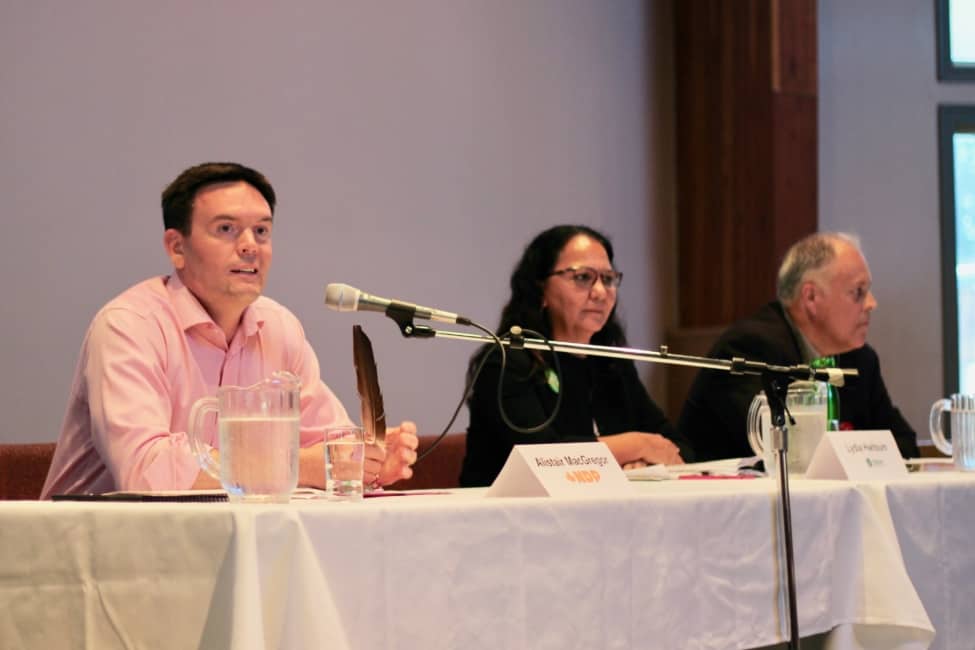 Over the last week, I’ve attended two gatherings to start listening to what Cowichan community members want to know. Today, I’ll share with you how Cowichan-Malahat-Langford candidates responded to a question posed by an audience member at EAT THINK VOTE, a meeting hosted by the Cowichan Green Community on Sept. 20.

The question was, how will you, in light of the climate crisis, balance the need for restoration and protection of nature, with needs for food production and housing?

Here are excerpts of the candidates’ responses. For full answers, see this video from the meeting, beginning at about 1:14:00.

“What I want to see happen is, once we’re back in to Parliament, is that the Liberal government will continue to push forward with their environmental plan that they established in 2018, and get the ball rolling on our climate change file, on our environmental file.”

“We have about 23 million cars in this country that all operate on gas. We have to, over a fairly short period of time, get to a point where we don’t have nearly that many vehicles running on gas. Norway, right now, 60 percent of the vehicles being purchased new in Norway are electric vehicles. We can get there. We can get there in a fairly short period of time. But the people in this room, and the people everywhere across the country, have to start making some different choices.”

“We send politicians to Ottawa, and to Victoria for that matter, to make decisions that a lot of us don’t want to make. And they are hard, hard, hard decisions. And there’s nothing easy in there. Everything is a balancing act. But I can tell you all on the climate file, we have to, have to, have to make some movement.”

“You have come to a topic that is so near and dear to my heart. I truly believe that we are looking at climate change, which is absolutely going to be — is — the defining issue of the 21st century. And how we act, here and now, is largely going to determine how future generations live their lives. That being said, tying to agriculture is a fantastic link, because I believe, and the evidence is out there, that agriculture has the potential to be one of our strongest tools against climate change.”

“One of the best ways we can tackle that problem is by putting it into the soil. We have to look at agri-ecological principles, we have to look at putting more woody crops in there, having crops that work side by side. Cover crops, no-till farming. But the potential is huge.”

“I think you can have sustainable farming methods. It’s being done in many parts of the world, including here in Canada. Which can produce an absolute bounty of food, also doing what we need to do to tackle this major issue of our climate. I’m in politics because I’m an optimist. I have to believe that better is possible, that we’re in here trying to make positive change. And I always try to tell farmers that you are probably going to be one of our greatest set of warriors in beating this challenge.”

“I think certainly the key aspect of that is balance. And how do we create the balance that is necessary? When we think about food security, we’re thinking about agriculture, but we’re also thinking about the oceans and the rivers that have provided such a wealth of protein and access over the years.”

“We need to understand that corporations clearly play a very strong role, and they have such a large control of our food supply. So I think that part of creating balance is taking back some of that, not only authority but responsibility, locally.”

“I don’t want to be a total corporation hater, because I think that there might be some stuff that they could actually do to help, by focusing on a triple bottom line, and understanding contributions they make, could make a big difference in terms of contributing to not only the mitigations but the restoration.”

“When we look at our oceans, and the impact — Elizabeth May was just talking the other day about how the levels and changes in oceans — what we’re doing to our oceans is having us destroy natural shellfish and food, when in reality, the lowest impact harvesting you can do is from the oceans.”

Alana DeLong with the Conservative Party of Canada and Rhonda Chen with the People’s Party of Canada did not attend the event. The Discourse reached out to them on Monday to ask if they would like to respond to the question. I did not receive a reply from either candidate by the time this post was published.

If you’re interested in digging further into the parties’ platforms on key issues, you may find this interactive guide by CBC News helpful. The Cowichan Valley Citizen has also published statements from Cowichan candidates on the environment and climate change.