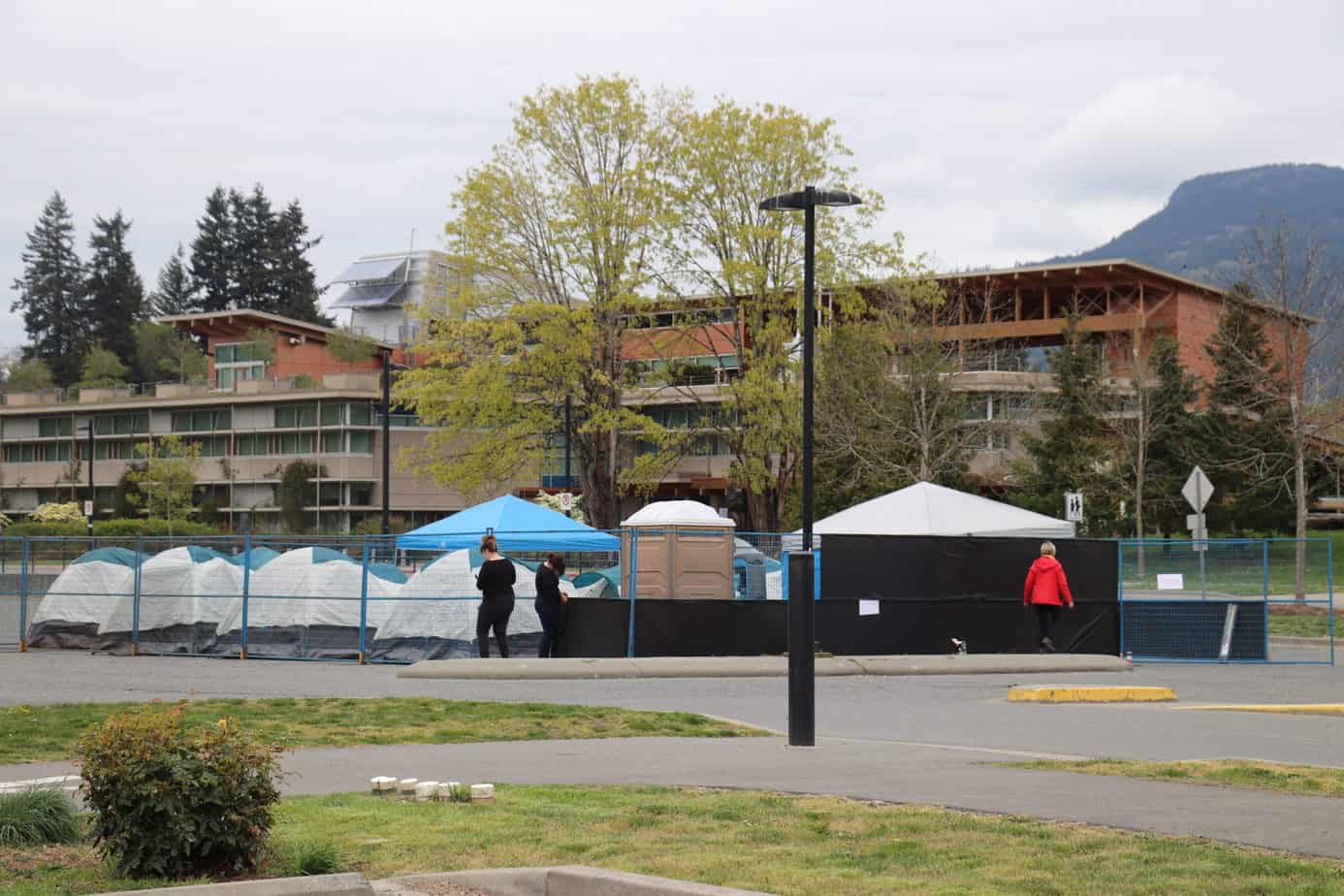 The facility will shelter some of the people left in the cold after the women’s night shelter closure.
David Minkow
Support this work. Tell a friend.

On April 27, the Cowichan Women Against Violence Society opened a tenting site in the Cowichan Community Centre’s overflow parking lot with room for eight women. The facility fills some of the gap left by the closure of CWAV’s women’s night shelter last month, amid staffing shortages brought on by the COVID-19 pandemic.

The situation is far from ideal, staff tell me: a highly visible location for people who prefer to keep a low profile; living quarters at the mercy of the elements for women seeking safe haven; a temporary situation for people in need of secure long-term housing.

Still, CWAV staff tell me they’re glad to be offering something rather than nothing to people in need of shelter and support through this pandemic. For those who will call this their temporary home, camping in the middle of a parking lot is a welcome respite from sleeping in the rain.

This CWAV facility is the first of many sanctioned tenting sites planned for the Cowichan region. The COVID-19 Cowichan Task Force for Vulnerable Populations plans for seven more, with a maximum of 12 residents each, in Ladysmith, Chemainus and the Duncan area. Exact locations haven’t been announced. The task force secured funding to move that plan ahead this week, according to a news release.

The task force decided on tenting sites because community groups said it would be impossible to find enough qualified staff to supervise indoor shelters. The hope is that these tenting sites will be successful without full-time supervision.

The CWAV site is the first experiment in how a sanctioned, controlled, small-scale tent site might work. “This is all just trial and error,” says shelter manager Adria Borghesan. She says she expects to make adjustments as staff get feedback from clients and others.

Off to a shaky start

I visited the site on Friday, April 24, as Borghesan and CWAV executive director Debbie Berg set up tents and attached privacy screens to the fencing. The site is equipped with eight tents, eight cots and eight folding chairs. There’s also a portable toilet, a hand-washing station and covered areas for smoking and eating.

But heavy winds struck the site the next day, a few hours before the first clients were originally expected to arrive. The winds destroyed three tents and damaged the two canopies covering shared spaces. This delayed the site’s opening until Monday, April 27.

Borghesan says she has acquired three replacement tents. She adds that Duncan Mayor Michelle Staples and North Cowichan councillor Rosalie Sawrie have helped with the setup of the site and the sourcing of items that will make the site more storm-ready moving forward. These include sandbags to secure the tents, heavy-duty canopies, and extra-high fencing with improved screening.

So far, so good, Borghesan says. As of Wednesday evening, three women had moved into the parking lot, and they are all “happy campers.” The rest of the spots will be filled soon, she says. Although they think the location is “weird,” the women say they are grateful to have a dry place to sleep.

The closure of the women’s night shelter had been a big blow to regular clients. “They’ve been very sad, some of them crying because they are sleeping out in the rain,” Berg tells me on the day the tenting site was slated to open. “It’s been very hard for them.”

But Berg worries that the tenting site’s central location makes clients an easy target for harassment. She asks that people respect the women’s privacy. “People are trying to come around and look at things — that actually makes them feel very unsafe.”

“It feels a little like sitting ducks,” Borghesan says.

And there have been security concerns. When I speak with her on Wednesday, Borghesan tells me that there was foot traffic in the area throughout the previous night, including several instances of people trying to enter the tenting site and sleep in one of the tents.

Like at the shelter building, male friends and partners are not allowed within 100 metres. That’s harder to enforce with a public sidewalk so nearby. But Berg says that the clients are committed to working together to keep to the rules. “They have been very good at making sure men don’t come near the shelter, so I know they’ll do the same kind of a good job around the tent area.”

The women selected for this site were picked for their ability to support each other, she adds. “They want to make a community.”

How was the location chosen?

The middle of a parking lot is not where CWAV had hoped to set up the tenting site. Staff say they wanted to set up in the field outside the women’s night shelter building, which is less exposed and more convenient. Staff continue to cook meals and wash laundry in the shelter building, and clients have occasional shower access.

Both the building and field are the property of Cowichan Valley School District 79, and last week, the school board voted down a proposal for the outdoor tenting site.

“It was an extremely tough decision,” says SD79 board chair Candace Spilsbury. She tells me that the school board values the work of CWAV and understands the need for an alternate shelter site. But she says that, given the school district’s current resources, it would be difficult to support any issues that might arise at a tenting site on its property. The board’s current priority is to offer online education to more than 8,000 students, provide in-person schooling to 70 children of essential service workers and fill hundreds of food hampers each week for families in need, she tells me.

Spilsbury adds that while the StrongStart program at Wendy’s House, next door to the women’s shelter, is now operating online, it would be “very difficult” to have an outdoor shelter operating in close proximity when in-person programming resumes.

After the school district turned down the proposal to tent outside the shelter building, CWAV worked with the Cowichan Valley Regional District to secure the parking lot site.

In terms of limiting the spread of COVID-19, is this good enough?

The women at the tenting site are considered to be part of a family unit, or household. “The idea is it’s like a family, so they eat together, they can live together, they’re kind of already exposed to each other,” Borghesan says. They are free to come and go, but they are expected, like the rest of us, to respect physical distancing as much as possible, wash their hands, and otherwise minimize the risks of exposure to the coronavirus.

Dr. Shannon Waters, medical health officer for the Cowichan region, says that while group tenting sites are not an ideal way to curb the spread of the coronavirus, it is helpful to have a set place where health workers can do outreach and medical assessments.

She says that Island Health has been working with The COVID-19 Cowichan Task Force for Vulnerable Populations to arrange locations to isolate people who are houseless and who have symptoms or test positive for COVID-19. But when I speak with her Thursday afternoon, she tells me that thus far no locations have been confirmed.

The wellbeing of underserved people in our community is a barometer for how we’re doing overall, especially in times of crisis, Waters says. “What a pandemic really helps bring forward is that we’re all connected.”

Borghesan hopes that one of the lessons learned from the pandemic will be how to treat and serve people who are homeless better. She has been managing the women’s night shelter since it opened in December, 2018. She says she considers that model a failure for not being able to make physical distancing possible for clients and staff during a time of crisis. “We’ve got to do better moving forward.”