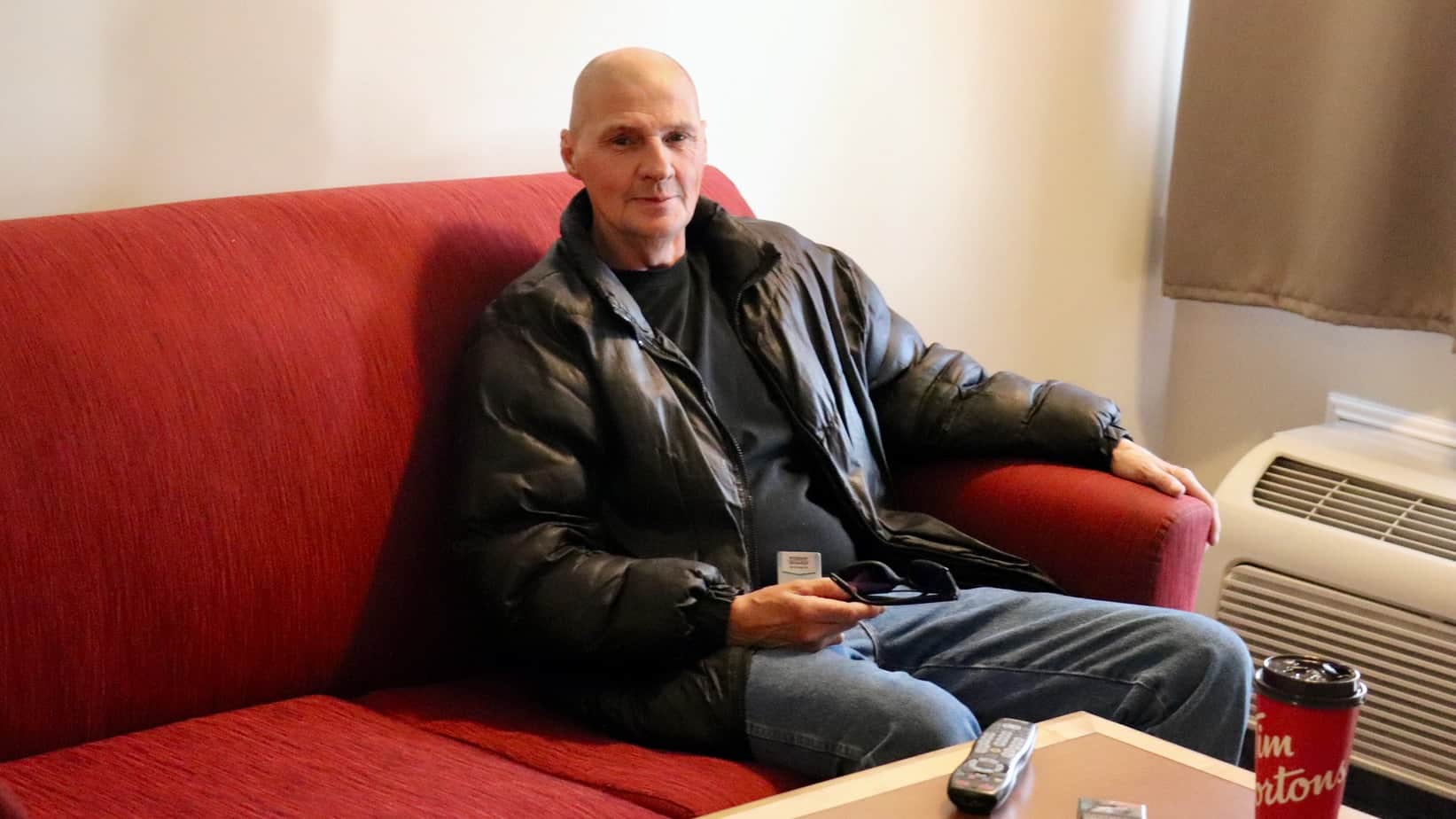 Jack Olson is thrilled to have a room for several weeks at the Ramada hotel in Duncan. Photo by David Minkow/The Discourse
Cowichan Valley

A ‘massive success’: Task force offers temporary housing at the Ramada in Duncan

Residents find security and new hope in the midst of a pandemic.
David Minkow
Support this work. Tell a friend.

For Jack Olson, a hotel room at the Ramada sure beats sleeping in a Toyota Echo. The 61-year-old Duncan native had been living in his vehicle for six months before moving into a room in late May that will be his home until the end of the month.

“It’s the best thing that could have ever happened in Duncan,” he says.

Olson is among 45 people, including five children, who are staying in rooms at the Ramada Duncan that the COVID-19 Cowichan Task Force for Vulnerable Populations is renting as temporary housing. Along with five tenting sites, this is Phase 1 of an effort to help people who are unhoused or precariously housed stay healthy during the pandemic. The Rapid Relief Fund provided $220,000 and BC Housing $172,000 to fund the first phase, which by many accounts has thus far been a resounding success.

Earlier this month, Olson proudly gives me a tour of his new, albeit temporary, accommodations. He shows me his bed, noting that it took a while to get used to being able to straighten his legs at night after so many nights sleeping in his small car. It’s also a big deal, he says, to be able to shower any time he wants. Because his room has a mini-kitchen, he bought a frying pan to cook up farm-fresh eggs, which he says is a favourite food that he hadn’t eaten in a long time.

Olson spends a lot of time simply sitting on his sofa with the curtains open. He says he likes to watch what’s going on in the large fenced area outside the hotel rooms where residents congregate and task force members provide food and services. The setup is comfortable, safe and quiet, he says, a far cry from the times he shivered all night in his car this past winter, as well as the two years previous to that, which he spent sleeping at the Warmland House shelter.

Although Olson doesn’t yet know where he will sleep in July, he is full of optimism about the success of the temporary housing program. It’s a win-win for residents and the broader community, he says. People who need support are getting it, and there are fewer people out on the streets. “This is a good investment,” he says.

From the Ramada’s perspective, things have gone even better than anticipated, says Nick Both, general manager of the Ramada Duncan. “The guests are extremely respectful and kind and we’ve been without incident since day one,” he tells me last week. Both adds that he thinks the “massive success” of the project could serve as a model for other communities.

“The community is a healthier, safer, cleaner place now because these folks aren’t roaming through the area from business to business and there’s less people hanging around in front of people’s homes right now because they’re all here.”

Mary Lionas, the task force’s site logistics coordinator, and previously Ramada’s events manager, says that residents are being very respectful and are generally keeping their rooms tidy. “They have somewhere to be that they can settle into,” she says. “It’s become their home.”

Olson and a handful of other residents I speak with tell me that they are getting along better with each other than they ever did at Warmland or out on the street. This is in large part, Olson says, because they have the freedom to be together or not. “People are communicating more,” he says. “It’s a more positive environment.”

Stacy Middlemiss, the shelter manager of Warmland House, visits the hotel site every day, and says she has noticed a huge change in people. “I honestly feel like it couldn’t be going any better.” For some residents, it’s led to a reduction in the consumption of alcohol or drugs, she says. And everyone seems to be in a better mood.

“People are happier every time I come here.” They’re looking to the future, Middlemiss says. “I find more people thinking about that. Maybe it didn’t seem like an option for them before. I feel like people tend to shoot low because that’s what they’ve always known.”

Duncan isn’t the only city using hotel rooms to help shelter people through the pandemic. Victoria’s plan got off to a shaky start when some residents failed to respect hotel staff, property and neighbours.

In part thanks to that lesson, the task force and the Ramada went to great lengths to ensure adequate support for residents and protections for staff.

The guest rooms are in a separate building from the rest of the hotel’s facilities. Ramada staff are not required to interact with hotel residents. If the front desk receives a call related to the temporary shelter, it is directed to task force staff.

There are 34 hotel rooms at the Ramada, 32 of which are being used as temporary housing. One room is for Blackbird Security personnel, who keep an eye on things, including in the fenced area where meals are served and residents congregate at several covered picnic tables. The other room is used as a staging area by task force staff.

The arrangement stipulates that the provincial government will pay for any damages or repairs. There is also a weekly check of the rooms so that work on any needed fixes, such as a new paint job, can get started before the end of the month, Both says.

Also, the task force is responsible for providing bedding, pillows and towels in all the guest rooms. The hotel had removed these and other items, aside from televisions and shower curtains, from the rooms and is storing them until the hotel reopens in July to the public, Both says.

Not just a bed

Middlemiss selected the hotel residents, who moved in between May 21 and June 4, for their ability to succeed there. It was tough to make those calls, she says, and she is working with people disappointed not to get a hotel room on improving skills and behaviours to prepare them for future housing opportunities. Many who didn’t get a hotel room were offered a tent at one of the five tenting sites in the region. There’s also room now at the Warmland House shelter.

The additional support offered to hotel residents are critical to the program’s success, Middlemiss says. “These guys were homeless for a reason. You can’t just throw them in a house and be like, ‘Hey, see you later.’”

Residents get three meals a day – dinners prepared by Ramada Duncan, lunches from Hiiye’yu Lelum – House of Friendship and breakfast thanks to the Emergency Food Access Task Force. There are also regular wellness checkups by members of Island Health’s COVID-19 Outreach Assessment Team. And, each day, members of the Canadian Mental Health Association’s homeless outreach team visit to see how residents are doing and what additional support they might need. The vulnerable population task force provides laundry and housekeeping.

Both task forces, one for sheltering people and one for feeding people, are the result of extraordinary cooperation between many Cowichan organizations in response to COVID-19. “We just have this ability to come together when there is a need for something and just make it happen,” Middlemiss says.

And those efforts are not lost on the current residents of the hotel. Fifty-six-year-old Brian, who asked to be identified by just his first name, had been staying at Warmland for six months. Standing up from one of the picnic tables, he points to several task force workers and says with tears in his eyes, “I really want to pay respects to all these people. … It’s beautiful.”

According to general manager Both, Ramada Duncan plans to reopen its rooms to the public on July 1, once they are professionally cleaned and restored back to normal. He says that the provincial government will pay guest rates for any rooms that aren’t ready.

But what’s still unknown is the fate of current residents after Phase 1 ends on June 30. While the task force anticipates that something will be in place for Phase 2, no details are locked in.

“I don’t know what the next thing will look like, but there’s lots of different things that we’re looking at,” says Middlemiss. She hints that more permanent housing is in the works, down the line. “In six months time, we could see a big change in this community.”

There’s evidence that providing people with housing and supports can be less expensive than business as usual, which relies on expensive emergency services to respond to people in crisis.

The uncertainty of what will happen after June 30 is making many residents anxious, Middlemiss says.

More than halfway through Phase 1, it’s been a very positive experience, according to people temporarily housed at the hotel, including Olson. “They need to keep this program going,” he says. Getting kicked back to the streets would be devastating for him and his fellow residents, he adds. “They had a go at life and now you take it away from them. That would be no good.”