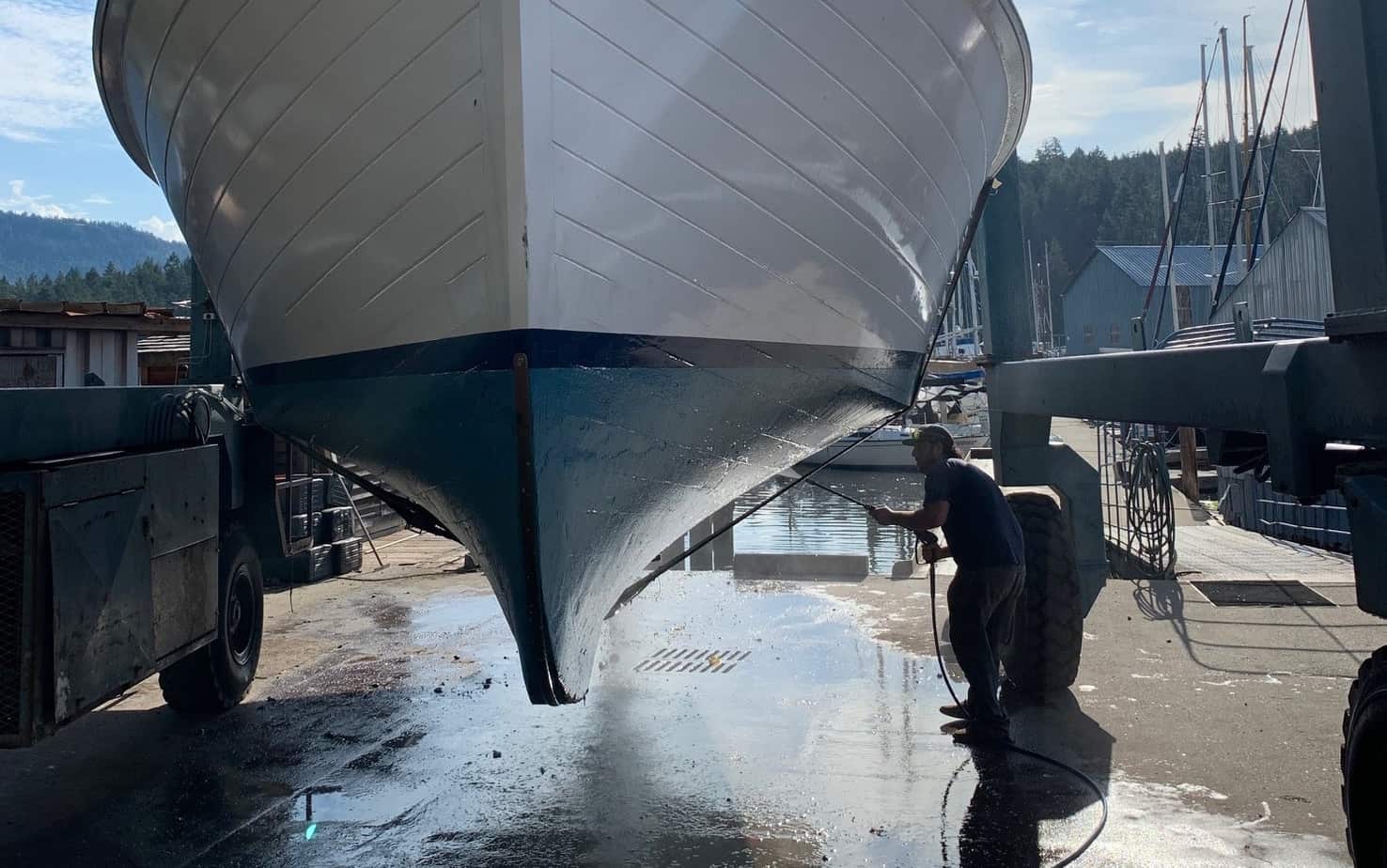 Resilient Cowichan: What it takes to stay afloat

When COVID-19 hit, Captain Simon made a quick pivot from whale watching to boat maintenance.
David Minkow
Support this work. Tell a friend.

The Discourse Cowichan is highlighting local stories of adaptation and resilience in the face of COVID-19. Know a good one? Send me an email.

It was a fallback that Simon Pidcock thought he would never need. He started a four-year apprenticeship as a marine repair technician at his family’s boatyard in Maple Bay in 2003 — the same year he launched a whale watching company. He was confident he could make a go of it running whale watching tours out of Cowichan Bay, but it never hurts to have a Plan B.

“I really never thought about going back to it until COVID hit,” he says.

Over the years, Pidcock grew Ocean EcoVentures into a successful company. Last year, his company took 8,000 people from all over the world out on the water, and 2020 was gearing up to be at least as good, he tells me.

But now, due to the COVID-19 pandemic, he has had to close up shop, at least temporarily. In addition to laying off his 11 employees, Pidcock says he has refunded about $130,000 in pre-paid bookings and cancelled several large contracts with European destination management companies. The future of his business, as it is for many other tour operators, is at stake.

A pandemic may not be the best time to start a new venture. But three weeks ago, in a bid to keep his finances afloat, Pidcock opened Cove Boatyard in Maple Bay, where he is again making use of his marine repair skills.

In early March, Ocean EcoVentures’ four whale-watching boats, with capacity for 12 passengers each, were primed to begin another season. In fact, one of them headed out with 11 guests on March 3rd. It was the first, and thus far only, trip of the year.

Four day later, Pidcock decided he needed to shut the business down due to growing concerns about COVID-19. “It’s obviously pretty hard to employ social distancing in a 12-passenger boat,” he explains.

He adds that it doesn’t make financial sense to lead trips at reduced capacity. “The business just isn’t really viable anymore for us to break even, with wear and tear, insurance, and operating costs,” he says. “If we’re limited to six people, it makes more sense to close the doors.”

But even after laying off his staff, Pidcock remains saddled with several costs, including moorage for the boats and rent on two office spaces. Fortunately, his main landlord tore up April’s rent check, he says.

Still, Pidcock realized he needed to find another source of income, fast.

Necessity is the mother of reinvention

He looked around for a job, but says he couldn’t find anything suitable. Because shipyards have been deemed an essential service during the pandemic, he then approached his parents Phil and Alexandra Pidcock, who semi-retired seven years ago, about taking over their boatyard. They negotiated an agreement, and Pidcock opened the doors to Cove Boatyard, formerly Cove Yachts, in April.

Word gets around quickly in the boating community, says Pidcock. A lot of people have been bringing their vessels to the boatyard, primarily for yearly maintenance. He services power boats, sailboats and commercial fishing boats, ranging between 24 and 80 feet. “I’m riding my parents’ coattails,” he says. “They’ve been in operation in Maple Bay since 1979, and my dad is one of the best shipwrights on the coast.”

Pidcock says he has made it a “closed boatyard” where customers are not able to work on their boats, just drop off their vessels. He and his teenage son Kalen pressure wash growth off the boats as well as do bottom painting, waxing, detailing, and woodworking.

He says he has been working long hours at the boatyard, reminiscent of the early days in the whale watching business. And while it’s not as much fun as taking people on a whale-watching tour, “It’s been really nice to be able to focus on something, and try and turn the tables and have the money going the other way.”

As his marine repair business continues to grow, he hopes to hire a couple of his whale-watching employees. “It’s looking like I will be training some whale-watching captains and operators to work on boats,” he says.

The pandemic has clearly upended the business model for Ocean EcoVentures. Last year, Pidcock set up a remote wilderness eco-lodge on B.C.’s Central Coast, near Rivers Inlet, for his company’s multi-day marine ecotours. And a few years ago, he started working with large tour operators bringing in customers from across Europe and Australia. He estimates that 65 to 70 percent of the clients are international.

And he knows they won’t be coming back anytime soon. He points to statements by health officials that widespread international travel isn’t likely until there’s a vaccine. “Which is really scary because that could be that could be 2022 for us, or that could be never,” he says.

“I think Vancouver Island is going to be hit really really hard, especially with all of the ecotourism and tourism businesses coming out of their slow season, prepared for their busy season and now not being able to operate,” Pidcock says. This, he adds, has a ripple effect. For example, closing his business impacts local restaurants, accommodations, marine businesses and the fuel company he uses.

Pidcock has received the $40,000 Canada Emergency Business Account loan, which will help with some of the bills that are stacking up. A quarter of the loan is forgivable if the rest is repaid before 2023. “But I’m also quite hesitant to spend the money because I don’t know if the business is going to survive,” he says. Earlier this week, the federal government announced a regional relief fund for seasonal and tourism-dependent businesses.

He is a member of a COVID-19 best-practices working group of marine ecotourism operators from around Vancouver Island. He says the group will be working with provincial officials to figure out how to start offering tours again in a way that ensures the safety of employees and guests.

If he’s able to re-open later this year, the business will rely on domestic clients, he says. The outstanding question is how long will people be expected to stay within their own communities. He says that while he has always had many local clients, there isn’t a large population base to draw from. So he will need people coming from the Mainland and elsewhere on the Island to make it work.

Whale watching is usually in full swing by May. This month, a National Geographic crew was slated to go out for two weeks, from dawn to dusk, on one of Pidcock’s boats to film killer whales preying on harbour porpoises and pinnipeds.

Instead, Pidcock is maintenancing other people’s boats while figuring out how to save his whale watching business. “I’m finding it hard to juggle both businesses at the moment,” he says. “Starting the boatyard so quickly in reaction to COVID-19 has made it hard to implement systems to streamline the workload.”

Pidcock recognizes that owning a boatyard may end up being more than just a stop-gap measure. “It’s the uncertainty that’s really tough because we just don’t know where tourism is going to be in one month, three months, a year, three years, five years,” he says.

For now, there’s no shortage of boats to service. While physical distancing is a major problem for tour operators, going out on your own boat is a great way to isolate. “It’s been really, really busy on the water,” says Pidcock, who tells me he has never seen so many crab and prawn traps in the ocean. The Canadian Coast Guard has reported increased calls, despite asking people to stay off the water.

Boat rides with Ocean EcoVentures are out, for now, but whale-watching is still possible — online. Some of Pidcock’s staff have been live streaming whale watching experiences with no guests on board. He says the response has been great — a reminder that many people share his passion. “The whales are still doing amazing out there,” he says. And hopefully, it won’t be too long before more people get to see them in person.