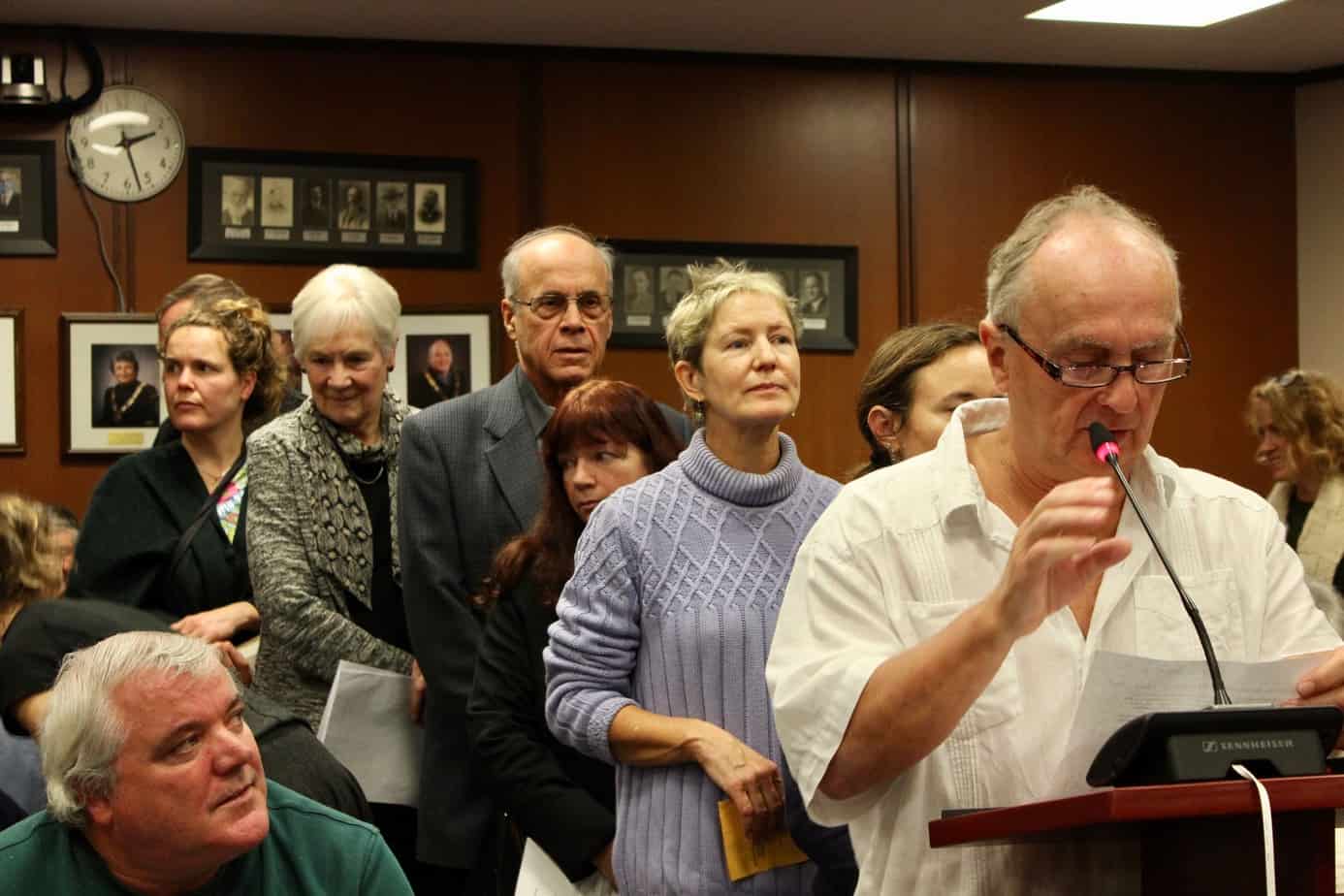 Members of the public line up behind Maple Bay resident Larry Pynn to offer their input to North Cowichan council on how to proceed with forest management.  Jacqueline Ronson/The Discourse
Cowichan Valley

Who speaks for the trees of the Cowichan Valley?

The community came out in force to give input on the future of municipal logging.
Jacqueline Ronson
Support this work. Tell a friend.

This is from our weekly Cowichan newsletter. You can sign up for it right here.

I witnessed something pretty amazing this week: Hundreds of people showed up to North Cowichan’s municipal hall for a public meeting.

As I drove up the road towards the municipal hall, it became clear something big was happening. Parked cars lined the road on both sides more than a hundred metres from the parking lot, which was overflowing. I snuck my vehicle onto a patch of grass on the corner of the road.

The people came, largely, because they want a say on how North Cowichan’s forests are managed in the future. Two delegations showed up to ask council for a pause on clear-cut logging in municipal forest lands until a public consultation about the use of those forests is complete.

Another delegation showed up to argue against pausing North Cowichan’s logging activities, highlighting the many benefits that the current forest management system, which includes some logging, has for the community.

Many, many members of the public showed up to give their input, or just to listen. A large majority spoke in favour of a pause in logging activities. Despite differences in opinion, the things the connect all of those present was a deep concern for the future of the Cowichan Valley and its forests.

It’s not easy to take time on a Wednesday afternoon less than a week before Christmas to participate in local democracy, so it was pretty cool to see so many people there.

After two hours of public input, council considered a motion to pause logging on one part of the forest reserve, Stoney Hill, until a consultation is complete. It decided to delay a decision until it has completed its strategic plan, which is expected to happen in early 2019.

Several weeks ago you voted for me to focus my reporting work on development and growth in the Cowichan Valley. One thing I figured out pretty quickly is that it’s not always easy for the public to get the information they need to know in order to participate in community and development planning in their neighbourhoods.

With that in mind, I’ve just published a step-by-step guide to having a say on development issues across the Cowichan Valley Regional District. I hope you’ll read and share it!

What are the biggest barriers you face when it comes to participating in development planning where you live? Email me your thoughts.

Dec. 20: 🍺 The barbers from Victory Barber & Brand North will be at Riot Brewing Co. in Chemainus for their Beer and Cut fundraiser. Get a beer and a haircut for a minimum $25 donation to the Cowichan Women Against Violence Society. Call the brewery to reserve a spot.

Dec. 23: 🎁 Check out the Solstice Artisan Market at Collective Space in Duncan, for all your last-minute shopping needs. A concert by musical group Yaima will run concurrently in the space.

Debbie Berg recently moved to the Cowichan Valley from Victoria after accepting a job as the executive director of the Cowichan Women Against Violence Society. She had no idea that, less than two months after starting the new gig, she’d be in charge of opening a new winter women’s shelter. It’s been “very good, but certainly challenging,” she says.

CWAV’s shelter will open its doors on Dec. 20, 2018, after years of attempts to open a space for women who would otherwise sleep outside through the coldest months. Previous proposals were defeated by the City of Duncan after some neighbours complained about potential impacts on their communities. Earlier this month, the Municipality of North Cowichan approved a three-year permit for the shelter, despite some opposition (mainly on the grounds that the building next door holds daytime programs for parents and young children).

“In any community, it’s so important to have this open, because you have people who are sleeping in the rain, and they’re getting sick, and they’re cold,” Debbie says. “I can’t imagine being outside when it’s this wet. I’ve been really thrilled to be able to be a part of this because I know it’s needed. For women especially, who are not comfortable going over to the other shelter, it’s just important they have a place they feel is safe.”

Over the past week volunteers and staff have been at the shelter, painting, cleaning, setting up 15 cots and installing two showers. Volunteers made care packages for the women with socks, toiletries, and other small gifts, enclosed in hand-painted brown paper bags.

The community is welcoming these women warmly, just as it did for Debbie. “I’m really thankful to the community that’s welcomed me, as well,” she says. “I’ve found it very welcoming.”

Want to read more good news from Cowichan? Sign up for our weekly newsletter.

Cowichan This Week – Did you hear the news?