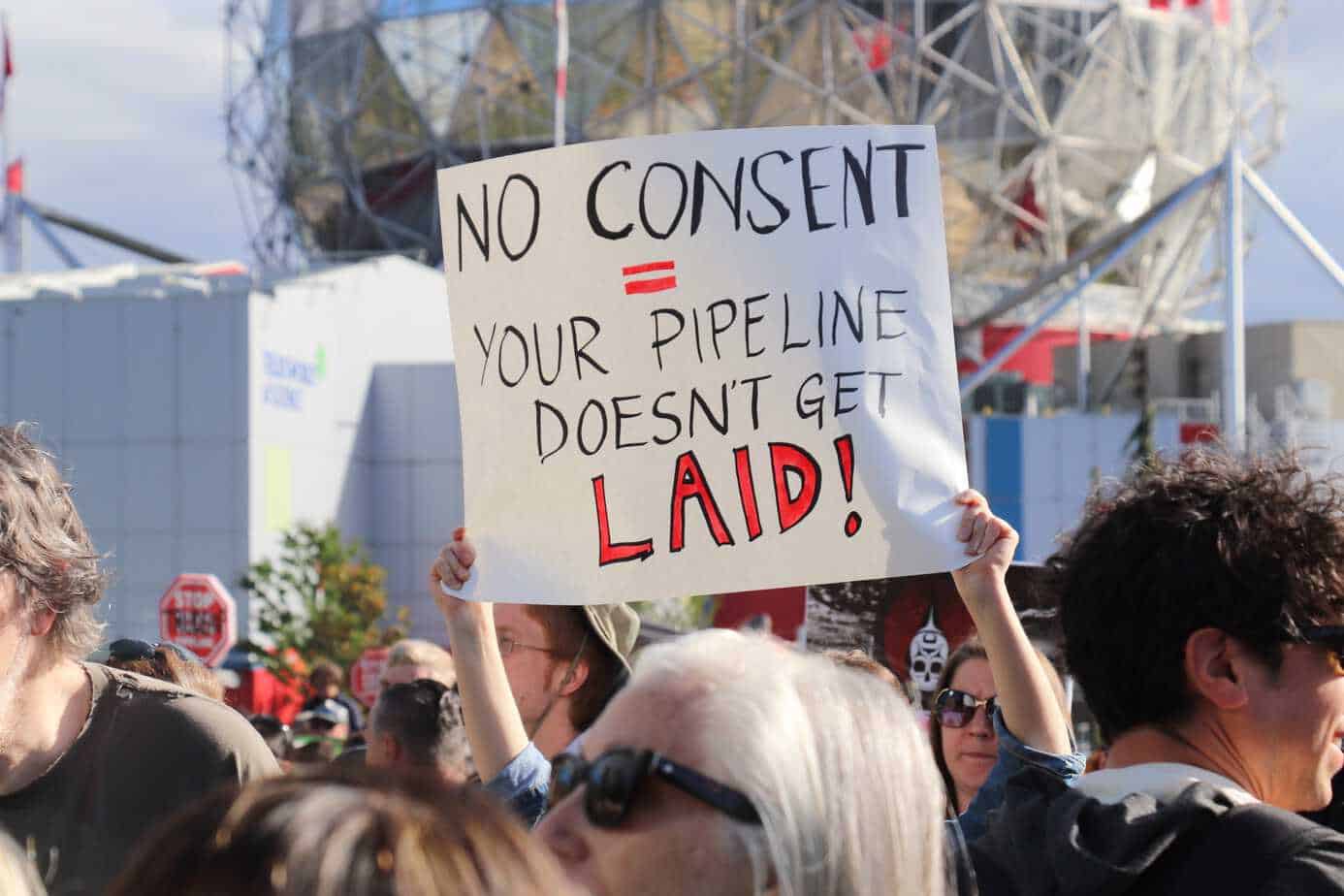 Protestors gather at the 'No Buyout, No Kinder Morgan' rally in downtown Vancouver May 29, 2018. Julia-Simone Rutgers/The Discourse.
Environment

Experts say the Canadian public may have just spent $4.5 billion on a “worthless asset” if even one First Nation stops the Trans Mountain Expansion Project in court.
Lauren Kaljur and Trevor Jang
Support this work. Tell a friend.

Kinder Morgan is the big winner and Canadians are the big losers of a deal to purchase the Trans Mountain pipeline and Expansion Project with public funds, one Vancouver-based lawyer says.

Eugene Kung with West Coast Environmental Law says the project won’t have legal certainty any time soon, as several First Nations are currently awaiting a ruling from the Federal Court of Appeal on whether they were adequately consulted by the Canadian government.

“If any of the First Nations are successful, the whole underlying approval goes away,” Kung says. “Canada is assuming that risk.”

Much has been said of the 43 First Nations that Kinder Morgan says signed agreements signalling their support for the Trans Mountain Expansion Project. But six First Nations are leading challenges against the project in court. And they could have a major impact on the future of the expansion.

Here are seven reasons why building a pipeline from Alberta’s oilsands to British Columbia’s coast is complicated, even if you own it.

1. The government has a legal duty to consult First Nations, meaningfully

Aboriginal rights are enshrined in Section 35 of the Constitution. The courts have gradually defined the government’s legal obligation to meaningfully consult First Nations before making decisions that might negatively impact these rights, such as building a pipeline.

Failure to consult meaningfully could result in the courts overturning an approval of a project, which was the case in 2016 with Enbridge’s $7.9-billion Northern Gateway pipeline.

“In the Northern Gateway case, the Harper government, when it was conducting its consultations, did not get the names of First Nations right,” says George Hoberg, a professor who specializes in natural resource policy at the UBC School of Public Policy and Global Affairs.

“[The government] didn’t get the issues that First Nations had expressed addressed properly. So the court could look at it and say that was insincere.”

As for the fate of Trans Mountain, Hoberg adds: “The question is whether the Trudeau government did a much better job with consultation to overcome those types of concerns with the courts.”

2. There’s a push to raise the standard from consultation to consent

Under Justin Trudeau, the Canadian government has pledged to fully support the United Nations Declaration on the Rights of Indigenous Peoples (UNDRIP). It calls for Indigenous groups to have the right to free, prior and informed consent before resource development projects proceed across their lands.

The federal bill to harmonize Canadian laws with the declaration is making its way through Senate, passing a third reading in Parliament on May 30, 2018. Meanwhile, the government is consulting with communities about how to implement UNDRIP.

“What’s going on here is we really have two quite different visions of what the proper role of First Nations should be in resource decision-making in their traditional territories. One vision is that of existing Canadian law, that governments are obliged to consult with First Nations, but if they can’t convince a First Nation to support a project, as long as they conduct that consultation sincerely, that the project can go ahead,” says Hoberg.

“A competing vision is that the Trudeau government, the Horgan government and the Notley government have all pledged their full support for the U.N. Declaration and that seems to imply that First Nations have the right to consent.”

3. We don’t know who has the final say

Does that mean First Nations have veto power over the pipeline? Like most elements of the pipeline project, it’s complicated.

Legal scholar Hadley Friedland points out: “What happens when Indigenous laws say, ‘No,’ and Canadian law says ‘Yes, it can’? We don’t seem to have developed a principled answer.”

Keepers of the Water, an Indigenous rights group at the epicentre of Canada’s oil sands debate, say true consent means Indigenous communities have the right to say no on their land. In his 2015 campaign, Trudeau agreed. He said “absolutely” no means no when it comes to resource projects on Indigenous territory. But in 2016, the Liberal government backtracked, saying UNDRIP does not give First Nations veto power.

But if the courts find the consultation to be inadequate and/or consent by First Nations is deemed lacking, it could send the Trans Mountain Expansion Project back to the consultation drawing board.

The support for UNDRIP (and overhauling environmental assessment for major resource projects) is not only about recognizing Indigenous rights. It’s also about clarifying what all of this means for companies interested in resource development in Canada.

4. Each First Nation is just that… a nation

You couldn’t lump them into one. The same way you can’t lump over 130 First Nations along the Trans Mountain pipeline and tanker route into one.

“As a matter of law, each individual First Nation has claimed [Aboriginal] title to its land that has not been been extinguished by the Crown. Those are individual claims,” explains Hoberg. Aboriginal title is an inherent Aboriginal right to a land or territory.

“If one of those First Nations’ rights have been seriously violated according to the courts, that can be used as justification for striking down the [pipeline construction] permit,” Hoberg says. “If that happens, the people of Canada just bought a worthless asset.”

The Canadian government argues that its decision to approve the Trans Mountain pipeline expansion met the legal standard for consultations with Indigenous communities. Ottawa maintains that its decision weighed interests and extensive evidence, including the National Energy Board’s recommendation that the project proceed on the basis that the project is in Canada’s national interest.

5. There’s a big difference between reserve lands and traditional territory

You might have seen reports that Trans Mountain has the support of every First Nation directly in the path of the pipeline.

Reserve lands were set aside for First Nations by the federal government and remain in control of Canada under the Indian Act. Traditional territory is the broader land that Indigenous peoples lived on before Canada became a country.

Reserves are small. In fact, all the reserves in B.C. combined amount to just 0.4 per cent of the province’s total land base. Combine all the traditional territory? It amounts to pretty much all of B.C. This has huge implications for resource development in the province as First Nations still claim title to their traditional territories today.

6. There’s a big difference between treaty land and unceded land

That leaves a lot of uncertainty about how and where these rights apply, which discourages investment in resource development in B.C. Treaties can provide certainty and clarify aboriginal rights and title, or ownership of B.C.’s land and resources.

“We’re not just bands. The decolonization process is that, you know, we have proper title holders of the collective nation … It’s not a band-driven thing,” says Judy Wilson, chief of the Neskonlith band, one of 17 federally recognized bands in the Secwepemc Nation.

7. First Nations in court have a strong title claim

In 2015, the traditional governance group Stk’emlupsemc te Secwepemc Nation (SSN), which includes members of  Tk’emlups te Secwepemc and Skeetchestn Indian Band, declared Aboriginal title over an area known as Jacko Lake, near Kamloops, B.C. The lake is considered a sacred site in Secwepemc culture, a place to reconnect with culture and practice ceremony.

The declaration was in response to the AJAX mine that was proposed for the area, to which the Secwepemc were opposed. The mine was eventually rejected in part due to SSN’s strength of claim to that area. The Trans Mountain Expansion is proposed for the same area.

“This proposed project is in an area with an epic story, the Trout Children Story, which also tells of our law, X7ensq’t [the sky and land will turn on you]. Our law tells us that if we do not show respect in passing or using this area the land and sky will turn on us. Secwepemc Law and our title dictates that we are the rightful decision-makers on the use of lands and resources in this area,” says Ron Ignace, chief of Skeetchestn Indian Band.

This story was edited by Lindsay Sample with fact-checking and copy editing by Jonathan von Ofenheim.

It was produced as part of #TrackingTransMountain, a collaborative reporting project from The Discourse, APTN, and HuffPost Canada that aims to deepen the reporting on Indigenous communities affected by Kinder Morgan’s Trans Mountain expansion project. 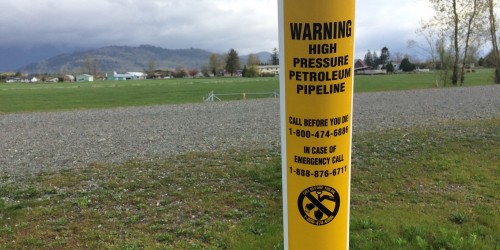