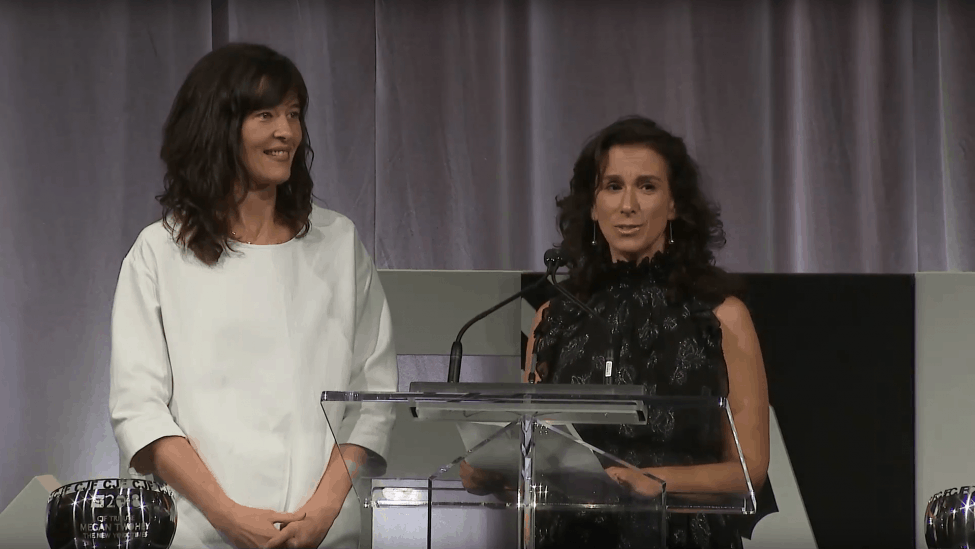 New York Times journalists Megan Twohey and Jodi Kantor were honoured by the Canadian Journalism Foundation in June 2018 for their investigative reporting that launched the #MeToo movement. CJFVideo/Youtube

What if women owned the press?

News media has a diversity problem. The Discourse is handing power to people who are underrepresented to shape their own stories — but there are barriers.

When New York Times reporters Jodi Kantor and Megan Twohey broke the story of Harvey Weinstein’s sexual assault allegations in October 2017, they ignited the #MeToo movement and inspired many thousands of women to break their silence for the first time. In the months that followed, hundreds of men were held to account for sexual misconduct.

Weinstein’s behaviour was a well-known secret for decades, protected by secret payouts, legal settlements, non-disclosure agreements and private investigators. It took many months for Kantor and Twohey to bullet-proof the story with enough evidence to convince their bosses at the New York Times to take the risk. Days later, NBC correspondent Ronan Farrow broke additional allegations against Weinstein in the New Yorker. He claimed he was prevented from breaking the story earlier at NBC because of pressure not to publish (which NBC has denied).

The women I know weren’t surprised by the stories. We know how rampant sexual harassment and assault is, especially among powerful men. Would the Weinstein story have been published years (or even decades) earlier if women had more power to decide what gets published in newsrooms?

The Times isn’t known for gender equity — according to this 2019 report by the Women’s Media Center, female reporters only accounted for 33 per cent of its bylines (the industry average was 40 per cent) and earned less than their male colleagues.

Gender equity isn’t only a Times problem. Editors at the 135 most widely distributed U.S. newspapers are overwhelmingly male and white, according to the report. Women are extremely under-represented in stories told and experts cited; for example, women penned only 15 per cent of guest-writer op-eds on international issues in the four top newspapers in the years studied.

The result of the news industry’s gender inequity problem is that it reflects a world in which women’s stories, expertise, perspective and power are less visible, and therefore are taken less seriously.

And this is, of course, not only a gender equity issue. Many (most?) people feel unrepresented and unheard by media: people who don’t live in major urban centres, people of colour, people who aren’t in the top income bracket… I could go on. And it’s not only an American problem. There are no comprehensive diversity reports on Canadian media, but the info we do have suggests we’re no better.

This is why The Discourse is focused on building a new model for local journalism based on listening to communities overlooked or poorly represented by media. As I wrote in other newsletters in recent weeks, our unique journalism process hands more power to community members to inform which stories are told and how.

Hiring more diverse journalists in traditional media would also certainly help. But having worked in legacy newsrooms, I’m skeptical about their ability to genuinely diversify, even when senior managers have the best of intentions.

I am more excited about the opportunity at startups to move the needle on news diversity. Free of the legacy part of legacy media, they can build diverse newsrooms from the ground up, create different cultures, and offer products that respond to market demand from communities underserved by other media.

Of course, being a startup doesn’t guarantee diversity. In a report published late last year, The Discourse found that women and people of colour are still underrepresented among founders of new digital media startups in Canada.

And this week’s chapter in the controversy surrounding digital media player De Correspondent shows that even well-intentioned startups can stumble when their leaders lack diversity. According to a report from Nieman Lab, the Dutch site’s track record on the stories it’s published show 98 per cent were written by white people, and twice as many stories authored by men than women.

“The extreme whiteness of De Correspondent’s output is a striking contrast to the way it marketed The Correspondent in the United States,” journalist Laura Hazard Owen writes. “What I heard repeatedly was that De Correspondent’s problems with diversity had been there since its launch in 2013, that the issue had been raised over the years, that the four white male founders had said in various public forums that they’d do better, and that they hadn’t, really.”

I’ve had the pleasure of meeting De Correspondent co-founder Rob Wijnberg, who is brilliant, and I genuinely believe his intentions are good. What Owen’s devastating critique of De Correspondent reveals, if you accept my charitable assessment of Wijnberg, is that its four white male founders are either not motivated or not capable of diversifying news, despite tapping into American sensitivities about race to market their fundraising campaign.

De Correspondent shows that we need diverse people at the highest levels of power if we really want to transform how journalism is done. So what is it going to take to see more underrepresented journalists found news startups? More on that next week.

Here are 5 diverse journalists we love:

Thank you to all our community members who shared their thoughts about last week’s newsletter on the Globe and Mail’s new Thunder Bay bureau: Will parachuting in white journalists reduce racism in Thunder Bay?

Racism is an increasing problem in Canada because many believe it is in the past and those people are mainly white. I think [journalists] being white helps reach [white audiences], but doesn’t help reach those impacted by racism or effectively tell their story. Partnerships to me are the solution.

Legacy media will always cover stories of institutional racism in a patronizing, superficial manner. The endgame is not justice but whitewashing.

Let us know: How do you think Canadian media can decrease racism?