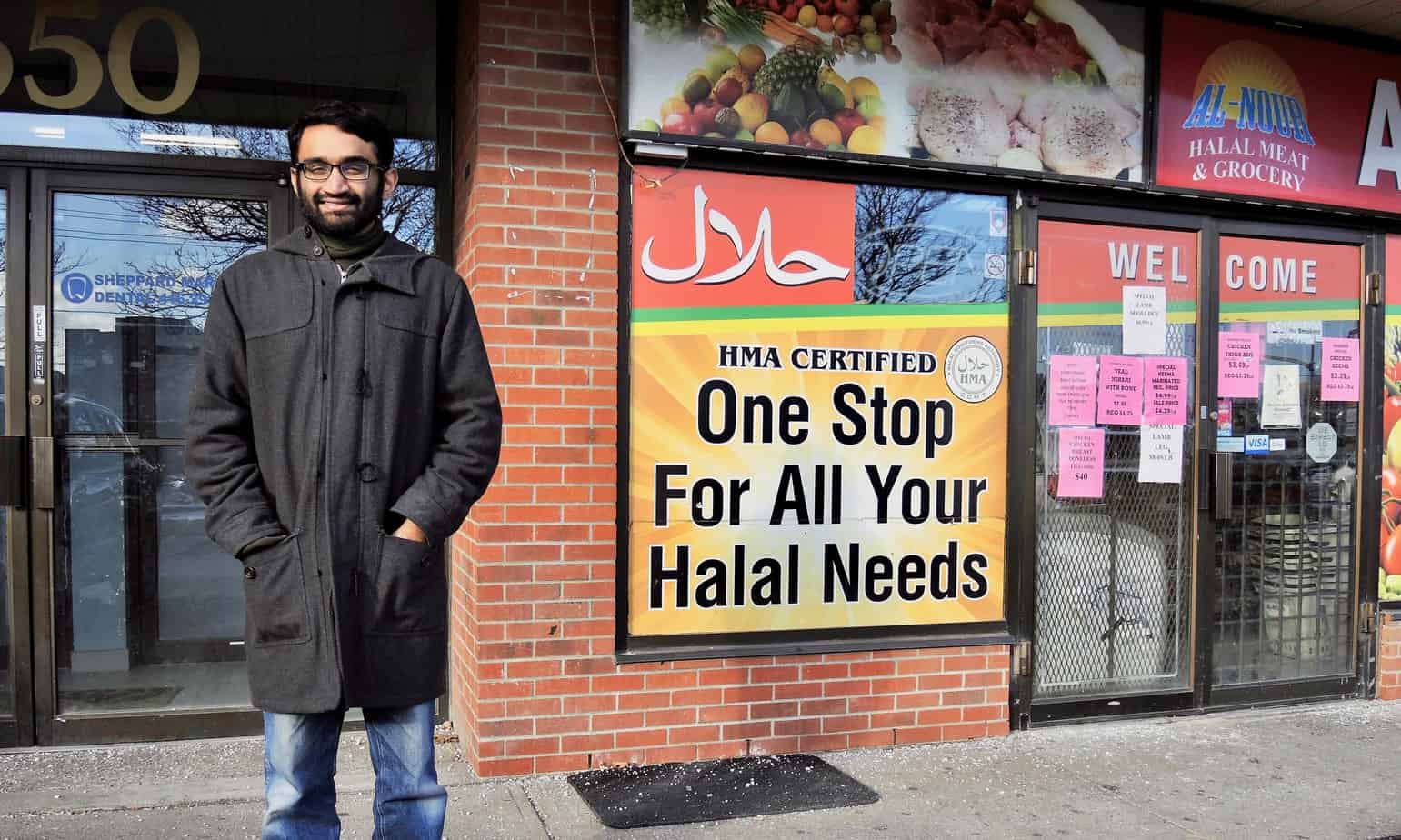 This strip mall near his home is “always filled with people and has been a meeting place and community hub of sorts since I was a kid,” Ubayd Deen says. Aparita Bhandari/The Discourse.
Scarborough

From Filipino bakeries to halal butchers, these drive-through stops have become unlikely gathering spaces in a sprawling suburb.
Aparita Bhandari
Support this work. Tell a friend.

A bright smile lights up Hazelmae Valenzuela’s face as soon as she steps into the warm, freshly baked cassava cakes-infused embrace of Mendoza’s Bakery on a cold December morning.

The family-run bakery specializing in Filipino staples and snacks is located in a small strip mall, a block away from the intersection of Eglinton Avenue and Brimley Road, a major Scarborough junction. This particular nook of retail stores features four small eateries and a hair salon. And, true to this Toronto suburb’s landscape, the food choices standing cheek to jowl vary from Filipino cuisine to an Indian-Pakistani restaurant that claims to offer the best biryani in town.

Two women wait by the counter for a batch of freshly baked pandesal. “My parents do that too. They like to get the pandesal when it’s warm out of the oven, and goes straight into their paper bag,” Valenzuela says.

Her family has been coming to this strip mall for close to a decade. On days they don’t feel like cooking, they pick up a meal from the neighbouring Filipino restaurant on their way home. “Actually, this whole strip mall used to be full of Filipino restaurants. I’m actually glad we now have a variety of food choices available,” Valenzuela says.

For young Filipina-Canadians like her, these strip-mall restaurants specializing in her community’s cuisine are a way to access culture for a younger generation that may not necessarily know how to cook their foods.

Strip malls like this one form what’s commonly called a third place in the parlance of urban planners and sociologists, says Daniel Rotsztain, an urban geographer, artist and writer. After your home (first place) and work (second place), these are spaces of community building — and this is especially true in a sprawling suburb like Scarborough.

Strip malls were the exciting new invention of the 1950s. Toronto’s first strip mall, Sunnybrook Plaza, opened at the corner of Eglinton and Bayview Avenues in 1952.

“It was when all the cool people were moving to the suburbs, you had this utopian vision of a suburban future. Then came this radical retail notion that you can drive up to the shops,” Rotsztain says.

By definition, strip malls are one- or two-storey retail buildings set back from the street as a result of the parking lot in between its storefronts and the street. Since the arrival of enclosed shopping centres, such as Yorkdale Mall or the Eaton Centre in downtown Toronto, and now with the popularity of online shopping, many suburban strip malls have fallen into disrepair.

“Fact of the matter is, some of them are eyesores,” says Gerard Arbour, 55, a chiropractor. A self-described “lifelong Scarborough resident,” he’s been patronizing local strip malls for decades, including the thriving Stop 20 Plaza located near the intersection of McCowan and Kingston Roads in the Cliffcrest neighbourhood.

An explanation of the Stop 20 Plaza name is a dive into Scarborough history, he adds. “This is from the time when we had the Kingston Road Radial,” he says, referring to the electric street railway that started operating in 1893, before being taken over by the Toronto Transit Commission’s streetcar service in 1921. Kingston Road Radial ceased operations in 1936, but the names of its numbered stop survived.

“Stop 20 Plaza was at the 20th stop on that line,” he says. “It’s been there since the 60s. You’ve got maybe a dozen businesses there, some new, some old. You have the anchor services like the hair salon. Some of them have been around for 25 years. There’s three different restaurants — Japanese, Italian and Mediterranean. There’s a florist service, Sweet Pea soap company. It’s a full plaza. You go walking along from one store to another, picking up dinner or flowers.”

“It’s a destination versus a drive-through,” he says.

While he’s a big proponent of supporting local businesses, Arbour says Scarborough strip malls have examples of “the good, the bad and the ugly” because some of the private properties simply don’t maintain their premises.

For Valenzuela, the sense of community offered by strip malls  — dilapidated or not — overrides the usual conversation around tearing them down to make way for high-density land development. A student of public policy and city studies at the University of Toronto Scarborough, she recently debated a classmate during a lecture on potential redevelopment around the Eglinton Light Rail Transit currently under construction.

“He was saying things like, ‘This whole area should be redeveloped, there should be no strip malls. It should be densified, have high-level storey buildings,’” she says. “He was talking about anti-homeless design. I got so mad. I said, ‘Do you not understand this area?’ There have been ethnic food stores here for a long time. They are low-rent and provide opportunities for new immigrants. And I love the food there!”

“I get that it’s not as aesthetically pleasing, it’s not the downtown [Toronto] beautiful plaza,” she says. “But there’s so much happening here.”

A sense of community is also evident in the example Ubayd Deen gives of a halal butcher shop that opened more than a decade ago at the strip mall at Sheppard and Progress Avenue, near his home. After the closure of an M&M Meat Shop that couldn’t cater to the predominantly Muslim population living there, the Al-Nour Halal Meat & Grocery took its place.

“I remember when it opened. It was very convenient for us. Sometimes you drive there, but most times you just walk up and pick up your meat. Occasionally you meet your family and friends there,” says Deen, 27, an accounting analyst.

“It’s nice to see them because it’s unexpected,” he says. “It brings a smile to your face.”

In fact, he says, between the business owners, family and friends, the halal butcher shop “became a big part of our life in meeting people.”

“There aren’t many places to sit, not many places with shade, not many crosswalks in between major streets. People waiting for a bus can be seen sitting on curbs or newspaper boxes,” he says.

Rotsztain will offer solutions to some of these challenges as part of a project called plazaPOPS, which he will co-present with Brendan Stewart and the University of Guelph next summer at Scarborough’s Wexford Heights Plaza. Funded by Park People’s public space incubator grant, plazaPOPS aims to demonstrate the potential of community gathering places within the privately-owned public spaces (POPS) of Toronto-area strip malls.

“We want to show that strip malls can be vibrant, pedestrian-friendly places,” Rotsztain says. His guide to enhancing strip malls includes suggestions such as building patios, planting trees and adding some seating areas. “Strip malls work well. They just need some infrastructure to support those kind of uses.”

For her part, Valenzuela points to the diverse food choices available at Scarborough strip malls as an illustration of the way Canadians can come together.

“A friend of mine introduced me to an Indian/Sri Lankan place. I took my parents there. Now we go there regularly. The owners know us, we eat their food. It’s how you go beyond tolerance, and start talking about acceptance.”

As Valenzuela prepares to leave Mendoza’s Bakery, the proprietor’s daughter, Alma Pillay, steps out of the kitchen with a tray full of freshly rolled Brazo de Mercedes, a roulade made of meringue and a rich custard.

“This is my favourite Filipino dessert,” Valenzuela says, grinning from ear to ear. Then after a moment of hesitation, she gives into temptation. “I’ll take one.”

This piece was edited by Robin Perelle. Sign up here for our Scarborough newsletter.