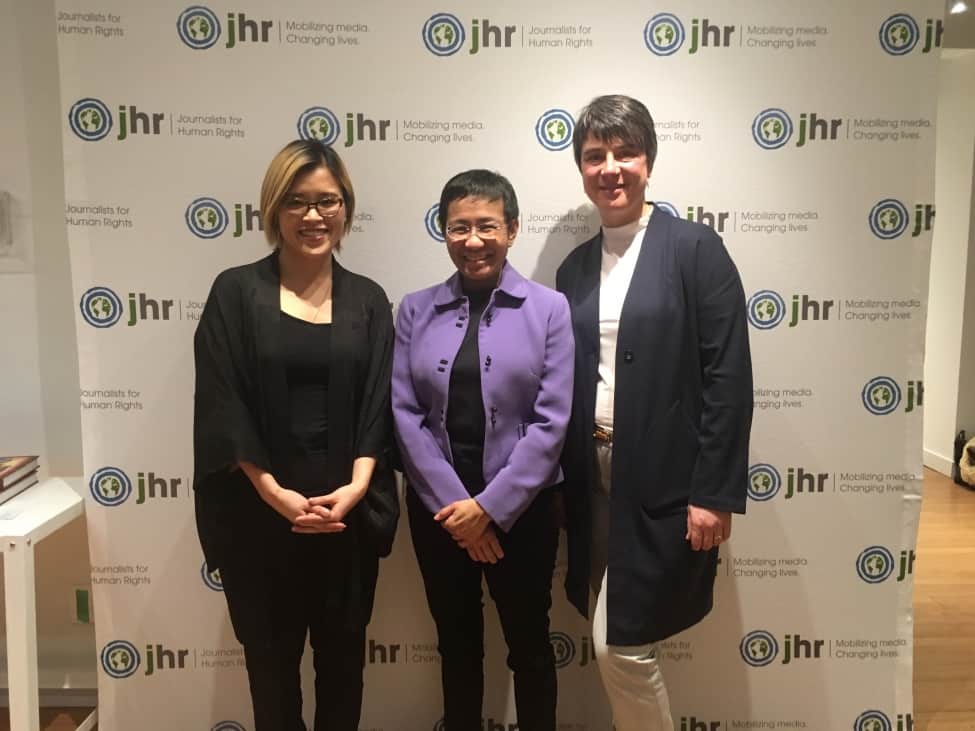 Arrested, detained and back in the newsroom

Ressa, a seasoned investigative reporter and Time magazine Person of the Year, was arrested in Manila this week on cyber-libel charges for a 2012 story alleging that a powerful businessman had links to human trafficking and illegal drugs. She was later released on bail.

After spending a night in custody, she’s already back in the newsroom demanding accountability from the same government that arrested her. Ressa’s news site, Rappler, has been covering Philippines President Rodrigo Duterte’s violent war on drugs campaign, which has resulted in the deaths of anywhere between 5,000 (according the government) and 20,000 people (according to human rights groups).

“How many people have been killed in the drug war? Why is it so difficult to get real numbers on the drug war?” she tweeted after her release.

Although press freedom in the Philippines continues decline — making it one of the deadliest places in Asia to be a journalist, according to Reporters without Borders — that isn’t stopping Ressa. “We’re calling on our people to demand that their rights be protected, she tweeted. “We call on journalists to demand truth so we can hold power to account.”

Here in Canada we’re among the top 20 countries when it comes to press freedom. But there’s still room for improvement, says Reporters Without Borders. In the last decade, we’ve seen the closure of over 260 news outlets. Last year, the Supreme Court ruled a VICE reporter had to hand over his notes to the RCMP. Another reporter is facing unprecedented criminal and civil charges for covering a protest in Newfoundland.

Do you feel like democracy is under attack here in Canada? Why or why not? Send us an email and let us know what you think. I’ll share some of your responses in an upcoming newsletter.

If your blood boils every time you hear a politician make an empty promise about better public transportation, if you depend on the bus to get around or even if you just tell transit tales as an icebreaker at parties, we want to hear from you.

On Thursday, Feb. 28 from 6 to 9 p.m., Scarborough Discourse will host our second Story Circle. Our first one was about media coverage in Scarborough where community members told us that they were tired of only hearing about crime and gangs.

This time, we’re focusing on transit.

But our Story Circle won’t involve the same ol’ subway versus Light Rapid Transit debate. Our goal is to provide a space for community members to speak directly to city councillors, and to learn about underreported solutions to Scarborough’s transit problems. No talking points are allowed —just tell us your lived experiences.

Thanks to Ted and Michael who told me about the famous folk legend, Black cowboy John Ware, after we published our last newsletter about Black History Month. The stories of Ware’s incredible horsemanship, feats of strength and courage are mixed with legend, making it hard to separate fact from fiction. But one thing is certain: He helped shape what would become Alberta in super-white and Eurocentric 19th-century Canada.

My second shout-out goes to Nabeel Ahmed who shared 32 names of people to add to our list of experts of colour. Nabeel is a researcher who specializes in urban policy, data governance, public-sector transformation and social entrepreneurship. He’s written about the challenges facing Toronto’s waterfront and the dichotomy of the city’s booming tech industry and high child-poverty rates. Thanks x32, Nabeel!